What Is Wheatstone Bridge?

A Wheatstone bridge is a kind of electrical circuit used in measuring an electrical resistance, which is unknown by balancing its two legs of the bridge circuit, where one of the legs includes an unknown component. Samuel Hunter Christie created this instrument in the year 1833 and was improved and also simplified by Sir Charles Wheatstone in the year 1843. The digital multimeters in today’s world provide the simplest forms in measuring the resistance. The Wheatstone Bridge can still be used in measuring light values of resistances around the range of milli-Ohms.

How Is A Meter Bridge Used In Finding The Unknown Resistance?

A meter bridge is an apparatus utilized in finding the unknown resistance of a coil. The below figure 12 is the diagram of a useful meter bridge instrument. 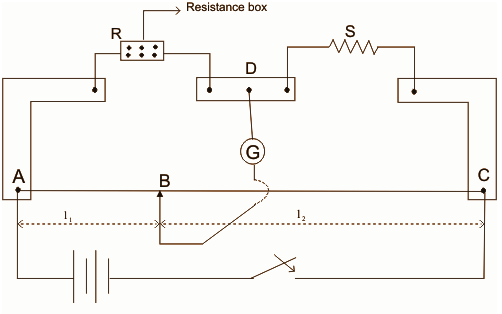 And the specific resistance of the material for a given wire is obtained by the relation = (3.14) r2X/l

where, r = the radius of the cable and also l = length of the wire.

The devices required in finding the unknown resistance of a conductor using a meter bridge are:

In the meter bridge, one of the lateral kinds of resistances is replaced by a wire having a length of the uniform cross section of about 1m. The other pair consists of one known and an unknown pair of resistances. The one part of the galvanometer is connected in between both resistances, whereas the other part of the wire is finding the null point where the galvanometer is not showing any deflection. At this point, the bridge is said to be balanced.