Nitration is the class of chemical processes that introduces the nitro group into an organic chemical compound. The term nitration is also sometimes used incorrectly to represent different processes such as the formation of nitrate esters among nitric acid and alcohols which further take place in synthesizing nitroglycerin. However, the main difference among the final structure of nitrates and nitro compounds is, the nitrogen atom forms a chemical bond with a non-oxygen atom such as the carbon or other nitrogen atoms. In the case of organic nitrates, the nitrogen is usually bonded with an oxygen atom which further has a bond to a carbon atom.

As such, in Organic Chemistry, nitration is a process in which there is the replacement of a hydrogen atom (organic compound) with one or more nitro groups (single bond NO2). The reaction usually occurs with high temperatures or we can say that the reaction is exothermic. Additionally, nitration reactions can be hazardous when performed on large scales in batch. A large amount of heat is released and multiple nitrations can occur which can be really problematic. Therefore, nitration reaction is usually controlled by some sort of systematic cooling that is particularly designed to take away the excess generated energy. Besides, the ability to control exotherms in-flow allows improved selectivity and safety. As such, there have been many nitration reactions performed using continuous flow.

By-products are also usually formed where some products can also be highly explosive.  Most of the nitration reactions are conducted at low temperatures mainly for safety reasons. Sometimes, nitration reaction is carried out with aliphatic compound also. Nonetheless, nitration of aromatics is more commercially important.

Let’s look at some of the types of nitration below;

This is a typical form of nitration syntheses wherein the “mixed acid”, a mixture of concentrated nitric acid and sulfuric acids is applied. The reaction between the mixture results in the formation of the nitronium ion (NO2+), which is the active species in aromatic nitration. Interestingly, this active ingredient also affects nitration without the need for mixed acid. On the other hand, during mixed-acid syntheses, sulfuric acid is not consumed. It rather acts as a catalyst and water absorbent. In the case of nitration of benzene which we will look at in detail below, the reaction is typically conducted at a warm temperature of 50 °C. The process is one example of electrophilic aromatic substitution,

Today there are several mechanisms that have been proposed such as the one involving single electron transfer (SET). But the above-mentioned is a common and popular reaction discussed in the syllabus.

The phrase ipso nitration was first stated by Perrin and Skinner in 1971 during their investigation into chloroanisole nitration. Ipso nitration basically involves compounds such as aryl chlorides, triflates and nonaflates. For instance, in a nitration protocol, 4-chloro-n-butylbenzene is reacted with sodium nitrite in t-butanol. This is done in the presence of 0.5 mol% Pd2(dba)3, a biaryl phosphine ligand and a phase-transfer catalyst (PTC) to form 4-nitro-n-butylbenzene.

With the help of nitration reaction nitrogen is added to a benzene ring which can be used extensively in substitution reactions. The nitro group usually acts as a ring deactivator. As the ring consists of nitrogen it is very useful because it can be used as a directing group or a masked amino group. The products of aromatic nitrations are very important intermediates in industrial chemistry.

Nitration finds various industrial applications and the most critical by volume is the production of nitroaromatic compounds such as nitrobenzene. Nitration reactions are used notably in the production of explosives like conversion of toluene to trinitrotoluene and conversion of guanidine to nitroguanidine. They are basically used widely as precursors and chemical intermediates. 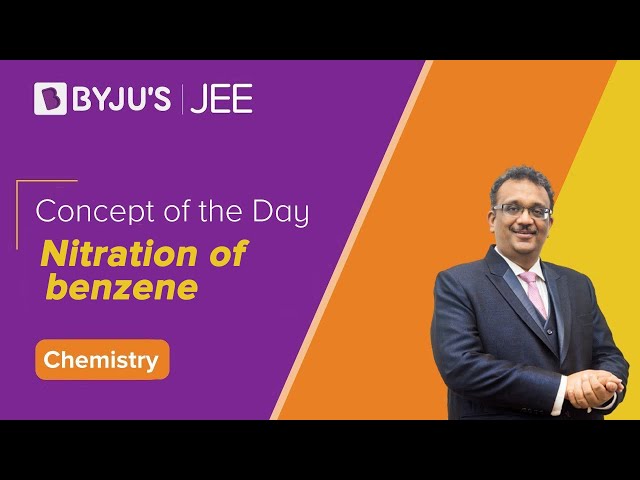 Benzene is treated with a solution of concentrated sulfuric acid and concentrated nitric acid at a temperature, not more than 50oC. As the temperature rises, there exist higher chances of obtaining more than one nitro group -NO2 being substituted in the ring.

The concentrated sulfuric acid acts as a catalyst.

The Formation Of Electrophile

The nitronium ion is a good electrophile and thus it is attacked by benzene to produce Nitrobenzene.

During electrophilic aromatic substitution, an acid-base reaction occurs. A weak base (water or HSO4– ion left after protonation of HNO3) removes a proton from carbon-bearing the nitro group, breaking C–H and re-forming C–C pi. Therefore aromaticity is restored.

Meanwhile, nitration is one of the popular organic reactions that is discussed in Chemistry. Besides, aromatic and aliphatic compounds can both be nitrated by different methods such as heterolytic (nucleophilic and electrophilic) and radical nitrations. Aliphatic is a free radical and Aromatic nitration is the most frequent electrophilic. Nitroaromatic compounds are mostly used as intermediates in the synthesis of pharmaceuticals, plants, dyestuffs, and insecticides.

As for the environmental issues of nitration processes apart from its explosive properties is related to the occurrence of acid vapours which are largely nitric or sulfuric acid from the reaction. There can be some other unreacted nitrating agents also that are used to carry the nitration reaction to completion. There are also cases resulting in the emission of VOCs or other gas streams containing the various oxides of nitrogen.

If we talk about water pollutants, the nitration of aromatic feedstocks may result in the generation of large quantities of waste mixed acid. This will require proper neutralization and disposal or even recovery (using the distillation process) and reuse. The products and by-products are usually slow to biodegrade and toxic. Now this will require additional treatment of the waste products.

Test Your Knowledge On Nitration!
Q5