Nuclear fission is the process of splitting a heavy nucleus, such as uranium or plutonium, in two smaller nuclei of nearly the same mass. During this process, the unstable radioactive nucleus is split into two smaller nuclei. Nuclear fission can occur spontaneously in some cases or can be induced by the bombardment on the nucleus with a variety of particles (e.g., protons, or neutrons or alpha particles) or by gamma rays radiation.

The modern “Atomic Age” is attributed to the discovery and developments in the field of nuclear fission. This has its own boon and bane. It’s judicious usage and development can help us to develop at a great speed and in a sustainable manner but if it falls in the wrong hands it can cause be a great threat to humanity. However, there is still a great scope of development and research in this field and still many more questions are to be answered.

As mentioned above the splitting of neutrons results in the release of a large amount of energy. During this process, there is a strong repulsion force between the protons. But, they are also bound together by the strong nuclear force. Typically, each proton applies a repulsion force of 20N on every other proton and that is equal to the force of a hand resting on a person’s lap. This is really a very large force for these atomic particles.

When a nucleus fissions reaction takes place, the neutron breaks the target nucleus into further smaller products. These fission products are nearly equal to half the original mass. Two or three neutrons are also emitted. 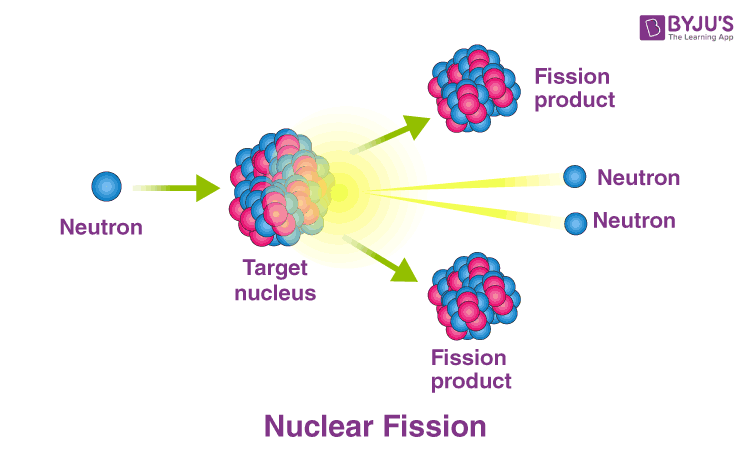 Interestingly the total sum of the masses of products is less than the initial nuclei mass. This ‘missing’ mass (which is about 0.1 % of the initial mass) is converted into energy according to Einstein’s equation: E = mc2. Fission always occurs when neurons are bombarded on a nucleus of a heavy atom, or it can happen spontaneously.

Here is a quick step by step process of the reaction mechanism in nuclear fission. 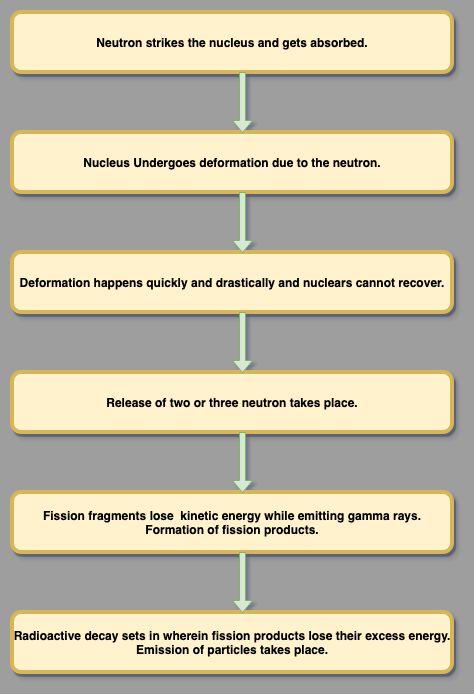 A nuclear reactor is the most important part of a nuclear power plant. This is the place where nuclear chain reactions occur that produce energy by fission. The heat thus produced can be used to produce electricity.

The main purpose of a reactor is to contain and control energy released. Uranium is used as the nuclear fuel in the reactors. The uranium is treated with ceramic pellets and they are sealed in the form of metal tubes called fuel rods. Generally, about 200 such rods are assembled together to form a fuel assembly. When a hundred of such assemblies are assembled together, it is called the core.

The fuel rods are dipped in water in the reactor, which functions as both a coolant and moderator. The job of the moderator is to slow down the neutrons produced by fission to control the chain reaction. Control rods may be immersed in the reactor core to reduce the reaction rate or pulled out to increase the same. The heat produced by such reactions converts the water into steam, which further converted into carbon-free electricity by the help of turbines. Nuclear Fission Reactor is as below: 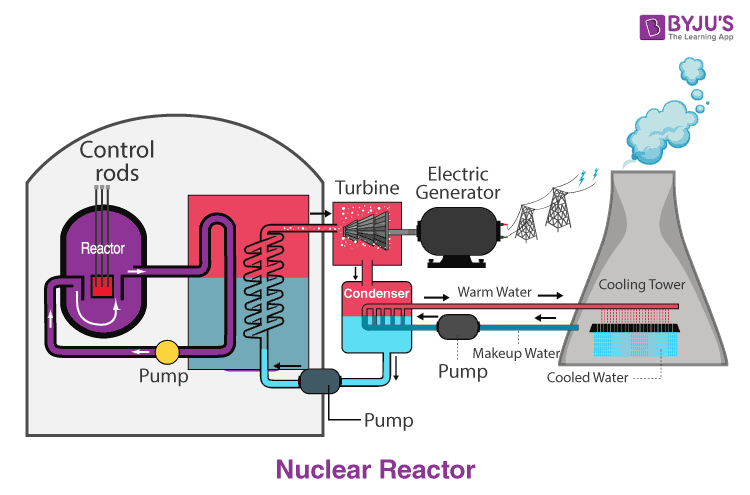 Advantages and Disadvantages of Nuclear Fission

Nuclear fission is one of the most researched and well-known topics of nuclear technology. This has been utilized as a very clean alternative source of energy. It will not be a hyperbole if we tell it as “the energy source of the future”. This technology is now achieving perfection and excellence and emerging at a very fast pace compared to other alternative sources of energy.

Fulfil The Needs Of The Present And Future Generation

An enormous amount of energy is produced by the process of nuclear fission, which can be utilized to fulfil the needs of next-generation high tech cities, and industries. As this is a very rapid reaction, energy can be produced depending on the requirement with greater reliability.

In contrast to fossil fuels, which causes serious damage to the environment, nuclear fission produces energy without releasing greenhouse gases into the atmosphere, which reduces the effects of global warming and even helps fight pollution.

The cost of operation is very low once the nuclear power plant is commissioned. The costs in operation are only the payment of workers to run the plant and the cost of the raw materials required.

The radiation emitted during the fission reaction is extremely harmful to humans and animals. The workers who are exposed while working at nuclear power plants are at great risk radiation poisoning, cancer and other diseases associated with radiation.

High vulnerability is a potential risk that is involved in nuclear power plants. The enormous energy produced in a fission reaction can be utilized to create nuclear weapons. Any small accident at a nuclear plant can cause huge damage, affecting the lives of millions.

The waste that is released from the nuclear power plant is highly radioactive and harmful for all living beings. There are high chances of water contamination from these plants which can cause serious diseases and death in living beings.

To build a nuclear power plant requires a huge investment, and this is due to the latest technologies and safety measures that are required to run it properly.

Question.1: Neutrons can be emitted by the process of?

In nuclear fission, a heavy nucleus is divided into two or more smaller nuclei. This results in mass decrease and large energy release and neutrons are also emitted in the process. Two or three neutrons are ejected per nuclei which are called fission elements.

Question.2: Neutrons with lower energy are used for nuclear fission. This is done

a) to increase the rate of reaction

b) to maintain Safety standards

c) for a sustained reaction process

d) for prevention of wastage of nuclear fuel

Question.3: What would happen when neutrons are on a nucleus of an atom of U235?

a) One electron is let out

b) The mass number of the atom increases

When neutrons are bombarded, one neutron is absorbed by the nucleus of U235 atom, forming a U236 isotope. This isotope is highly unstable which decays within one-millionth of a second and divides into two equal parts producing 200MeV of energy.