Oxygen constitutes about 21 per cent of atmospheric gases and is very reactive. All elements on earth react with oxygen to form oxygen-containing compounds. Of the oxygen compounds, binary compounds of oxygen with lesser electronegative elements are called oxides. Fluorine is the only element having large electronegativity than oxygen. So, all binary compounds of oxygen except with that of fluorine are deemed to be oxides.

Most of the stable oxides have oxygen in its -2 oxidation state. Examples of oxides include Na2O, CaO, A2O3, CO2, N2O3, Cl2O and XeO2.

An oxide is a category of chemical compound that has one or more oxygen atoms as well as another element in its composition such as Li2O, CO2, H2O, etc.

Metallic oxides:  A chemical compound formed by metal and oxygen.

Polymeric oxides: In oxides with a crystalline structure, oxygen is bonded with several metallic atoms such that the bonding and the structure of the oxide are polymeric. For example, Titanium oxide crystal has a rutile structure, where each titanium is surrounded by six oxygen atoms and each oxygen bonded to three titanium in a triangular direction. The bonding atom involves other unit cells. This involves the participation of many unit cells like polymer formation from a monomer.

So, these oxides are considered as polymeric oxides.

Oxides with simple atomic ratios are generally molecular in nature. Oxides of carbon/ nitrogen and halogen are examples of molecular oxides.

The strong reactive metal reacts completely to form oxides in the entire volume. Less reactive metals like aluminium, noble metals like silver, gold reacts to from only oxides at the surface. The surface oxide prevents the entry of oxygen inside to react with the atoms in the bulk.

Peroxides are oxides having an oxygen-oxygen bonding and an oxidation state of -1 are peroxides. H2O2 has a molecular structure of H-O-O-H. Here, each oxygen is bonded to one Hydrogen and there is a -O-O- bonding. Since oxidation state is the number of the bond that oxygen makes with a hetero-atom, the oxidation state of both oxygen atoms is the same and equal to -1. So, H2O2 is a peroxide. Metallic peroxide, like sodium peroxide, releases hydrogen peroxide on reaction with acid.

Most of the elements on earth exist in the form of oxides. But the elemental oxides differ much in their chemical properties. Some oxides are acidic in character, while some are basic. Some oxides can behave both as an acid and basic and some are neutral and do not possess either acidic or basic character.

Acidic oxide: Examples include carbon dioxide, sulphur dioxide, phosphorus pentoxide, sulphur trioxide, chlorine oxides, etc. Some of the characteristics of this oxide include.

Basic oxides: Examples of basic oxides are Na2O, CaO. They have the following characteristics.

These are oxides formed by elements exhibiting the trans-over of property from the metallic to non-metallic in the periodic table.

The properties are summarized in the table.

Trends in the Properties of Oxides

The variation in the properties of the oxides of elements in terms of chemical nature, strength and stability can be judged from their location in the periodic table.

Trends in the Properties of Oxides Along the Period

Electropositive metals form basic oxides. Along the period, as electronegativity increases, the basic nature of the oxides decreases and becomes both acidic and basic (amphoteric) at some transition element and then becomes increasingly acidic. So in any period, the first group elements form strongly basic oxides, while the seventh group elements form strongly acidic oxides. Higher the electronegativity of the element bonding with oxygen higher the acid nature of the oxide.

In the inert gases elements, only xenon forms oxides, and they are acidic.

Trends in the Properties of Oxides Along the Column

Trend in the Oxide Properties with the Oxidation States 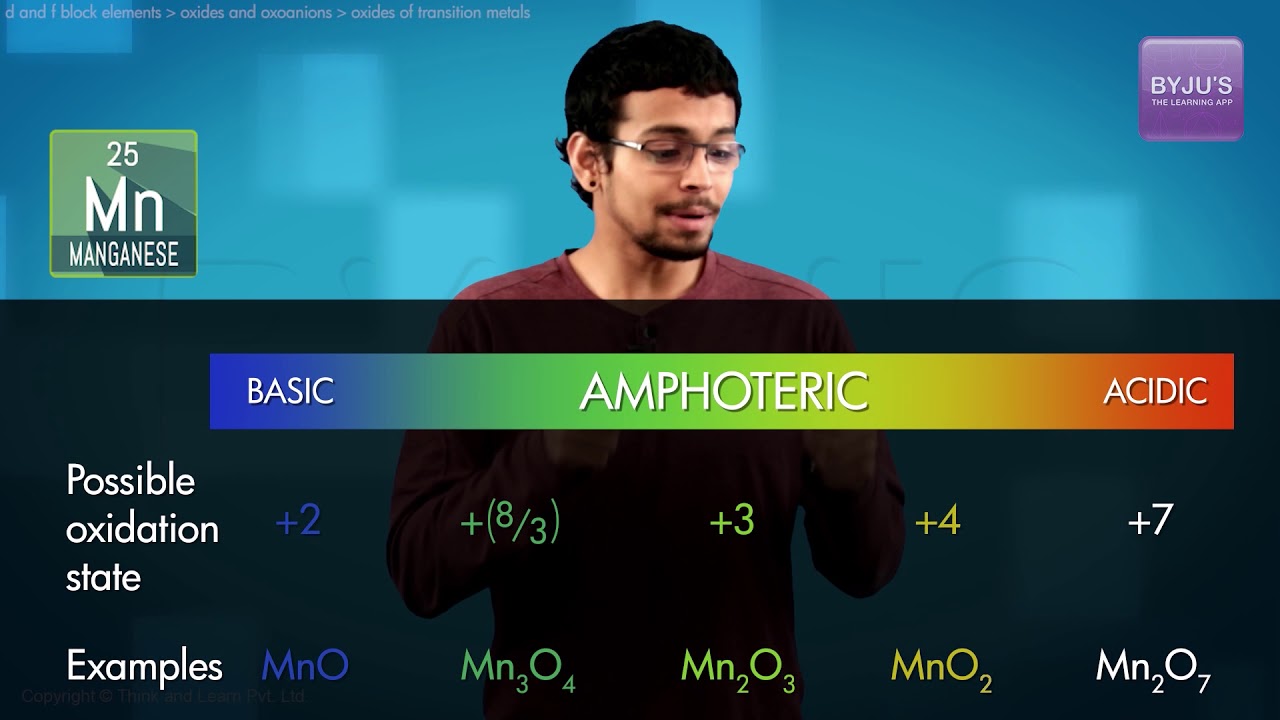 What is the chemical formula of an oxide?

O2– is the chemical formula of an oxide.

Give three examples of basic oxides?

Why are metallic oxides basic in nature?

The metallic oxides are basic in nature because they react with water to produce bases. For example-
Na2O + H2O → 2NaOH (a strong base)

What happens when carbon dioxide reacts with water?

Give an example of neutral oxide.

Carbon Monoxide is a neutral oxide. Though it is an oxide of non-metal carbon, it does not show acidic properties.
Test Your Knowledge On Oxide!
Q5