Schrodinger wave equation describes the behaviour of a particle in a field of force or the change of a physical quantity over time. Erwin Schrödinger who developed the equation was even awarded the Nobel Prize in 1933.

What is Schrodinger Wave Equation?

It is based on three considerations. They are;

Schrodinger equation gives us a detailed account of the form of the wave functions or probability waves that control the motion of some smaller particles. The equation also describes how these waves are influenced by external factors. Moreover, the equation makes use of the energy conservation concept that offers details about the behaviour of an electron that is attached to the nucleus.

Besides, by calculating the Schrödinger equation we obtain Ψ and Ψ2 which helps us determine the quantum numbers as well as the orientations and the shape of orbitals where electrons are found in a molecule or an atom.

Time-dependent Schrödinger equation is represented as;

Time-dependent Schrödinger equation in position basis is given as;

Time-independent Schrödinger equation in compressed form can be expressed as;

A wave is a disturbance of a physical quantity undergoing simple harmonic motion or oscillations about its place. The disturbance gets passed on to its neighbours in a sinusoidal form.

The equation for the wave is a second-order partial differential equation of a scalar variable in terms of one or more space variable and time variable. The one-dimensional wave equation is-

The amplitude (y) for example of a plane progressive sinusoidal wave is given by:

where, A is the maximum amplitude, T is the period and φ is the phase difference of the wave if any and t is the time in seconds. For a standing wave, there is no phase difference, so that,

In general the same equation can be written in the form of,

Planck’s quantum theory, states the energy of waves are quantized such that E = hν = 2πħν,

where, h is Planck’s constant, m is the mass and v is the velocity of the particle.

where, p is the momentum.

Electron as a particle-wave, moving in one single plane with total energy E, has an

Substituting for wavelength and energy in this equation,

Total energy is the sum of kinetic and potential energy of the particle.

Substituting in the wave function equation,

Substituting for EΨ and p2Ψ, we get the wave function for one-dimensional wave called as “Time-dependent Schrodinger wave equation”.

Time dependent Schrodinger equation for three-dimensional progressive wave then is,

The equation is also written as-

Schrodinger equation is written as HΨ = EΨ, where h is said to be a Hamiltonian operator. 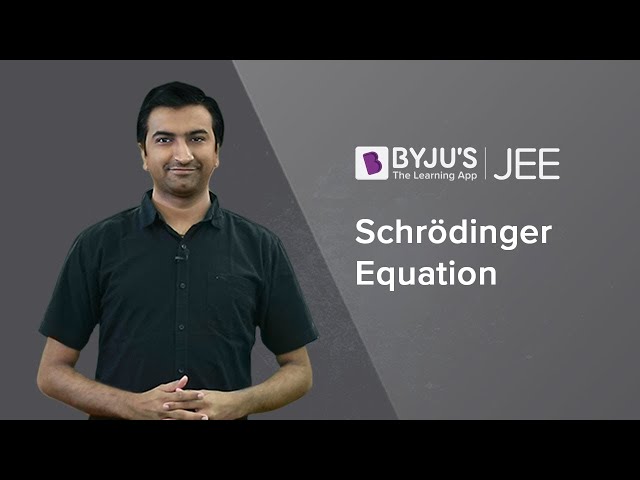 1. What is a wave function?

Amplitude, a property of a wave, is measured by following the movement of the particle with its Cartesian coordinates with respect of time. The amplitude of a wave is a wave function. The wave nature and the amplitudes are a function of coordinates and time, such that,

Wave function Amplitude = Ψ = Ψ(r,t); where, ‘r’ is the position of the particle in terms of x, y, z directions.

2. What is meant by stationary state and what is its relevance to atom?

The movement is akin to a stationary wave between two fixed ends and independent of time. Wave function concept of matter waves are applied to the electrons of an atom to determine its variable properties.

3. What is the physical significance of Schrodinger wave function?

Answer: Bohr concept of an atom is simple. But it cannot explain the presence of multiple orbitals and the fine spectrum arising out of them. It is applicable only to the one-electron system.

Schrodinger equation could explain the presence of multiple orbitals and the fine spectrum arising out of all atoms, not necessarily hydrogen-like atoms.

4. What is the Hamilton operator used in the Schrodinger equation?

Answer: In mathematics, the operator is a rule, that converts observed properties into another property. For example, ‘A’ will be an operator if it can change a property f(x) into another f(y). f(x)= f(y) Hamiltonian operator is the sum of potential and kinetic energies of particles calculated over three coordinates and time.

5. The electrons are more likely to be found:

Region a and c has the maximum amplitude (Ψ) and hence the maximum probability density of Electrons | Ψ2 |
Answer: (2)