In physics, shielding or screening is the process of limiting the electric field to a certain region of space.

An earthed conductor acts as a screen or a shield against the electric field. If we place a metal screen XY near a charged body B, the resultant electrostatic field due to electrostatic induction is as shown in figure (a). But when the conductor XY is earthed, the free induced positive charge on it flows to the earth and with it disappear the lines of force emanating from it as shown in figure (b). 1. The electric field is zero everywhere inside the conductor.

Consider a conducting slab placed in an external field Eext in electrostatic equilibrium, the electric field inside the conductor must be zero. If this were not the case the free charges would accelerate under the action of the field.

In good conductors, the time it takes the conductor to reach equilibrium is of the order of 10–16 s, which for most purposes can be taken as instantaneous.

It should be noted that induced charges appearing on the surfaces are equal and opposite.

2. The electric field must be normal at every point to the surface of the charged conductor.

If electric field had a tangential component, the free charge would move along the surface creating surface currents and the conductor would not be in equilibrium.

3. Any charge on an isolated conductor resides on its surface.

Thus, there is no charge inside the conductor and the excess charge q resides on its surface as shown in fig. However, Gauss’s law does not tell us how this charge is distributed on the surface. This principle that there are no charges on the inner surface of a charged body, can be used to transfer the charge from a sphere to a previously charged conductor.

4. The electric field just outside a charged conductor has a magnitude σ/ϵ0, where σ is the charge per unit area at that point. We can use Gauss’s law to relate the electric field just outside the surface of a charged conductor in equilibrium to the charge E distribution on the conductor. To do this, it is convenient to draw a Gaussian surface in the shape of a small cylinder with ends parallel to the surface as shown in Fig. A part of the cylinder is just outside the conductor, and a part is inside it.

(i) There is no flux through the face on the inside of the cylinder because E = 0 inside the conductor.

Applying Gauss’s law to this surface,

Since electric field is normal to the surface,

Where n is a unit vector normal to the surface in the outward direction.

It should be noted that:

(iii) Further, equation (2) agrees with the results already obtained and is known as coulomb’s theorem.

Consider a conductor of arbitrary shape containing a cavity as shown in the figure. 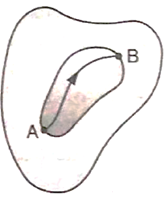 Now imagine that a field exists in the cavity, and evaluate the potential difference (VB – VA) defined by the equation:

If is non-zero, we can always find a path between A and B for which is always a positive number, and so the integral must be positive. However, since (VB – VA) = 0, the integral must also be zero. This contradiction can be resolved only if E = 0 inside the cavity. Thus, we conclude that:

A cavity surrounded by the conducting walls is a field-free region as long as there are no charges inside the cavity.

The above result has some interesting applications. For example, it is possible to shield an electronic circuit or even an entire laboratory from the external field by surrounding it with conducting walls. Shielding is often necessary when performing highly sensitive electrical measurements.

The electrostatic potential is constant throughout the volume of the conductor and has the same value (as inside it) on its surface.

On an irregularly shaped conductor, charge tends to accumulate at locations where the radius of curvature of the surface is the smallest, that is, at sharp points.

Some of the important electrostatic properties of conductors have been summarised in the figure.

Distribution of Charges on the Conductors

The distribution of charge on the surface of a conductor is described by surface charge density (σ) which is the charge per unit area of the conductor.

If the charge is uniformly distributed and q is the charge present on area A, then surface density of charge,

In case the charge is not uniformly distributed,

Where Δq is the amount of charge on so small an area ΔA over which the distribution of charge can be considered uniform.

Relationship Between Surface Charge Density and Curvature of the Surface

When the spheres are joined by a wire, the charge flows from one sphere to the other till they are at the same potential, i.e.,

If E1 and E2 are the electric fields at the surfaces of the spheres, then

Let σ1 and σ2 be the surface densities of charge for the two spheres. Since the charge is distributed uniformly on the surface of the conducting spheres,

Representation of Surface Density of Charge

Since the surface density of charge is directly proportional to the curvature, at a point where the conductor has a large curvature, the distance between the point that conductor and the dotted line is also large. We represent below the charge distribution due to conductors of different shapes. From all these figures, the following points of interest emerge.

(i) Wherever the curvature is uniform, the surface density is also uniform.

(ii) At edges and corners, where the curvature is maximum (i.e., the radius is minimum), the surface density of charge is also maximum.

(iii) There is no charge inside the conductor.

Why do charges accumulate at the points?

The charges present on the surface of a body are similar (i.e., either positive or negative) and as such repel each other. Thus, the charges try to go as far away from each other as the shape of the body permits. Corners and edges, being at maximum distance, have the maximum charge density. In other words, these are the ‘hot beds’ of charge.

1. Two metallic concentric shells of radii rA and rB are given charges qA and qB respectively. Initially, both of the shells are not connected. If we connect two shells by a conducting wire, what happens to the potential difference between them? And charges on them?

Similarly, the potential on B,

Now the potential difference between the shells A and B is,

2. Two concentric spherical shells of A and B having charges qA, qB and radii rA and rB respectively, if the key (k) is closed what happens to the final charge? Distribution of the system? Before the key is closed, When the key is closed 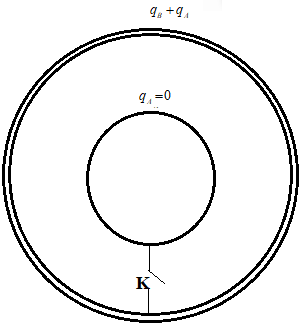 When the key is closed, the charge given to the inner shell will become zero, which it goes to the outer shell. Why it happens is because it wants to shield the electric field.

Two concentric spherical shells A and B of charges qA = q0, qB = 0, and radii rA and rB respectively, if we take the ground outer sphere, what happens to the final charge distribution? 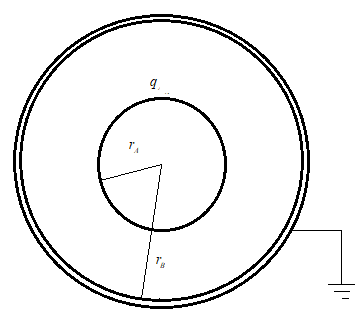 But shell B is 🡪 Non-isolated it is connected to ground.

For isolated system 🡺 charge must be conserved.

Grounding is the reference level for the potential of the system. We will take grounding means zero reference Level of the potential.

For grounded object outer surface charge always we will take it as q’ inner charge will be bounded charge (or) induced charge by the inner ring.

Two facing surfaces always o will have an equal and opposite charge because they are bounded surface.

If we write the equation (v = 0) for grounded objects by all the charges present in the system. 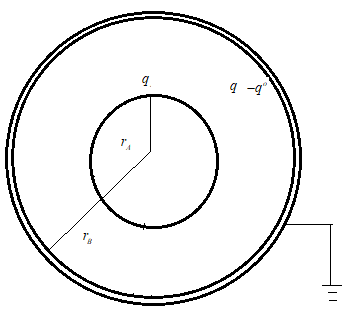 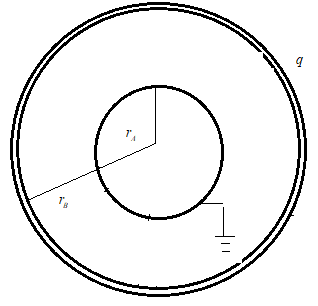 Respectively find the final charge distribution, if the inner shell is grounded? 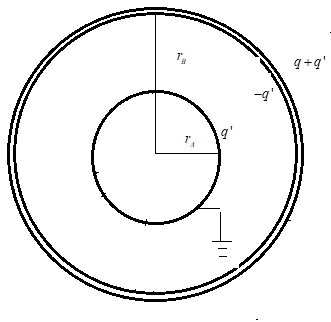 Grounding only ensures the total potential of the system should be zero.