Role of Water: Water makes 70-90% of the cellular pool and 65% which is around two-thirds of the human body, formed by Hydrogen and Oxygen atoms in the ratio 2:1. 5% of water is in the combined form in a cell while 95% is found in the free state. Water supports in sustaining essential life processes and hence called the cradle of lip and life is next to impossible without water.

Role of Oxygen: Oxygen is utilized mainly in aerobic cell respiration of the nutrients in the mitochondria to form ATP molecules which are energy-rich and 5% of the available energy is released in the absence of oxygen.

Role of Proteins: Proteins are the polymeric compounds consisting of monomers (amino acids) by peptide bonds. Only 20 among 100 types of amino acids are of biological importance. Proteins perform a major role in the building structures in the living organisms. Similar to fat and carbohydrate, protein can be broken followed by the liberation of energy. Protein is normally used only as a substantial source of energy in starving situations.

The term taxonomy was coined by A. P. Candolle and consist of seven major taxonomic categories. It is the sequence of categories in ascending or descending order from to kingdom to the bottom-most species. The hierarchy holds two categories namely intermediate and obligate. Obligate is followed strictly and ranges from kingdom to species, but Intermediate is just its opposite. 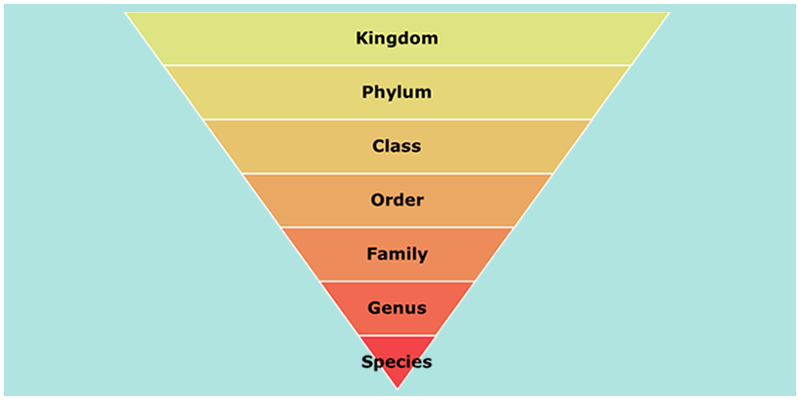 Genus: This is an assembly of a set of similar species that are involved in common ancestors and consist of common characters known as correlated characters. For example, leopard and cat are put in the genus Panthera.

Family: It is the set of similar genera. The families are classified based on the vegetative and reproductive features. For examples, tiger and lion are put in the Felidae family.

Order: It is the assembly of one or more than one common families, considered as a higher category. Felidae family are involved in the Carnivora order.

Class: A class points towards a subdivision in a phylum consisting of one or more than one order. The Mammalia class involves all the mammals which are gorilla, monkey, man and gibbon.

Phylum: It holds a set of similar classes. Phylum Chordata includes Mammalia along with reptiles, fishes, amphibians and birds.

Kingdom: Every animal which belongs to different phyla are assigned to the highest taxonomic category known as a kingdom. All animals along with plants are included in the kingdom Animalia and Plantae. A taxon is a unit that shows the group of organism depending on visible features.

Various methods that are applied to classify organisms are known as Taxonomic aids. Keys are used for identification depending on the contrasting characters and called as a Taxonomic key. Biologists use the botanical garden, herbarium, zoological parks in taxonomical studies.