Kerala Board SSLC Class 10 Biology 2015 Question Paper solutions is a useful resource for the students to perform well and score high marks for the board exams. This Class 10 exam question paper is the basis for most of the questions that are asked in the Biology exam paper. Students can access the PDF formats of the solved or unsolved question paper, as per their preference by just clicking on the links mentioned below. For the convenience of the students, we have listed the clickable links in this article along with the questions and answers on the web-page.

Meanwhile, all the students who have mastered the complete complex topics from Biology will find it easier to ace the final exams. Students can also easily understand the type of questions asked in the KBPE SSLC Class 10 Biology exam with the help of these question paper solutions. Additionally, they are advised to solve the previous papers of Kerala Board Class 10 Biology. After solving the papers, students can refer to these solutions and self-analyse their performance and also scale their preparation level for the board exams. Doing so will help them to determine where they have gone wrong and how to avoid these mistakes for the final exams. Solving these papers is the best way for the students to get an overview of the exam paper pattern and the marking scheme. Students can also determine the difficulty level of the exams with the help of these SSLC question paper solutions. 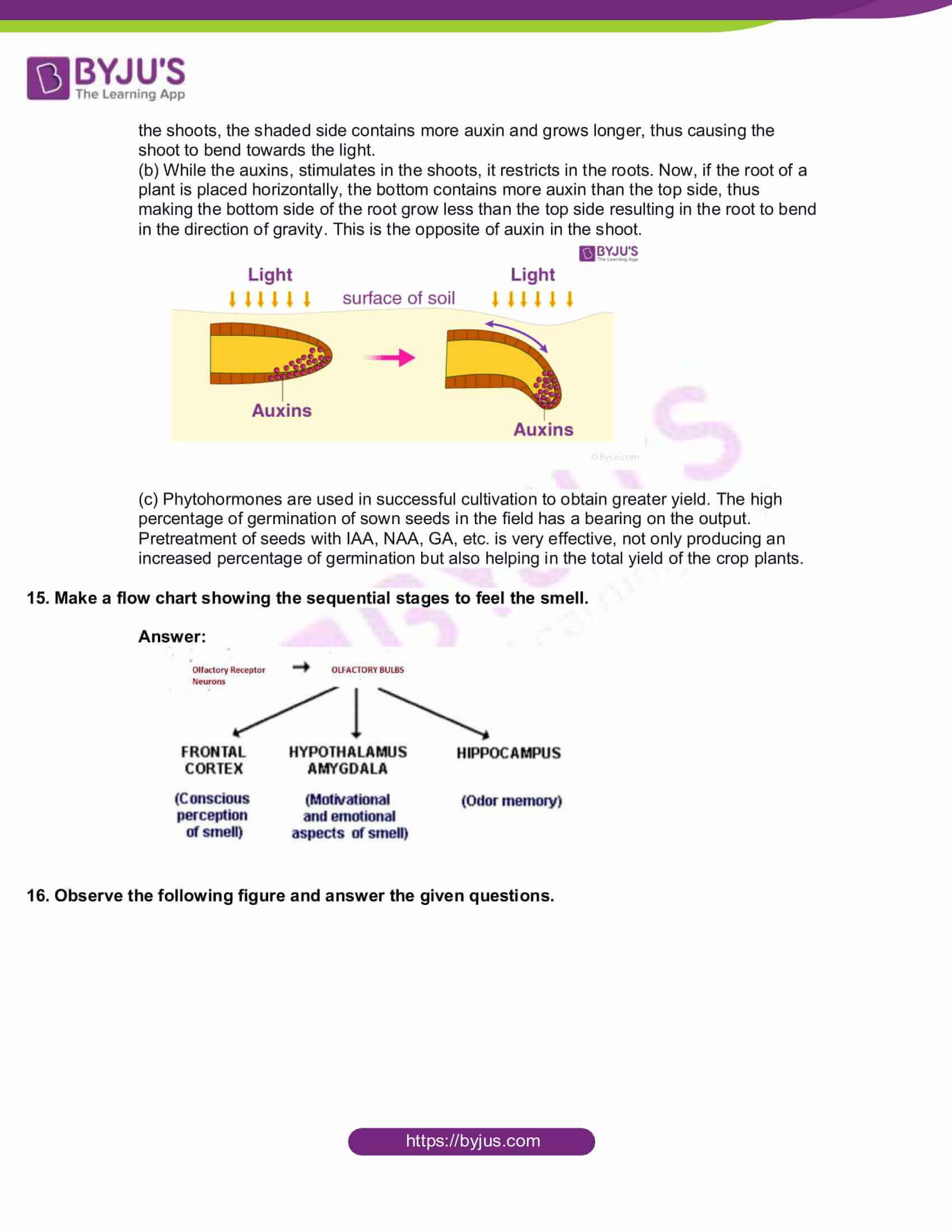 1. Find out the relationship between the pair of words and fill up the blanks:

2. Find the odd one out and identify the common features of the others:

(a) Ringworm. It is a fungal infection as the rest are all viral infection

(b) Iguana. Other three are all products of genetic engineering

3. “Germs, both alive and dead are used to get immunity”. Substantiate the statement with vaccines used for rabies and tuberculosis.

In the rabies vaccines that fight against rabies, dead germs are used. Alternatively, in BCG, vaccines are used against tuberculosis, live, but inactive vaccines are used. So, this can substantiate the statement that “Germs, both alive and dead are used to get immunity.”

4. Diagrammatically represent the symbols with the first generation of progenies of Tall and Dwarf pea plants when cross-pollinated as in Mendel’s early stage of the experiment. 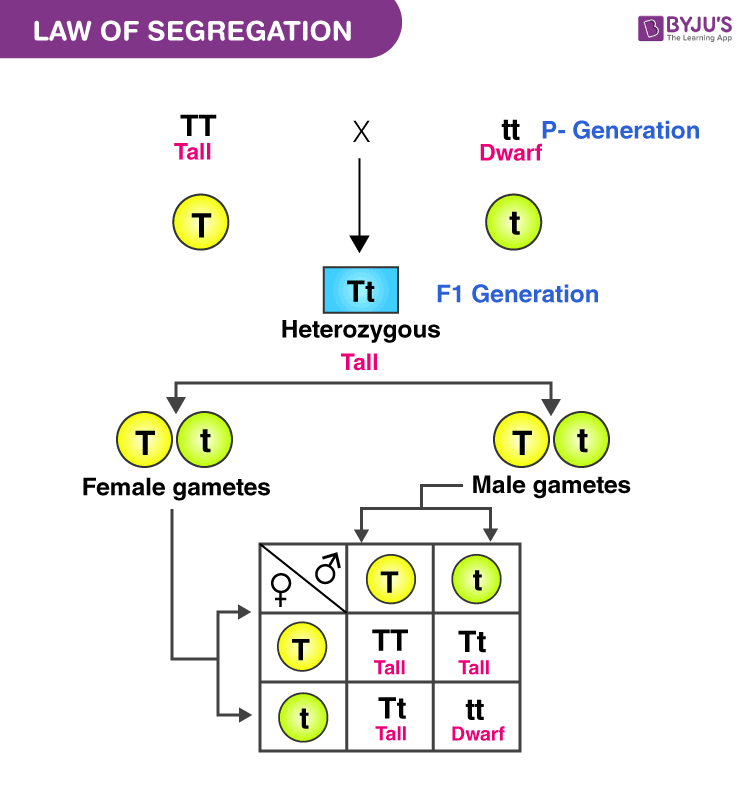 5. “Receptors are modified neurons.” Justify the statement with examples of receptors in different sense organs.

6. Write your inference by analysing the following information in connection with evolution.

The variation in the number of amino acids in the β chain:-

Answer: (a) Changes have occurred in the sequences of the amino acids in these organisms due to mutation and then natural selection. It is related to how closely these organisms are connected and their classification. Even though the sequence of amino acids in the haemoglobin molecule is different, the whole molecule will have the same basic structure, and its function of binding the oxygen molecules is also the same. Hence, this change in sequence will not affect the operation of the haemoglobin.

Using this information from the sequences of amino acids in haemoglobin, the evolutionary relationships between the species in terms of the evolution of humans is evident. Chimpanzees, gorillas, rhesus monkeys and humans are more closely related and have a more recent common ancestor. The kangaroo and horse would also have a common ancestor with chimpanzees, gorillas, rhesus monkeys and humans, but further back in time than the common primate ancestor.

The dog (Canis familiaris considered a distinct species or Canis lupus familiaris is a subspecies of the wolf) and is a domesticated carnivore of the family Canidae. At the same time, the rhesus macaque (Macaca mulatta) is a species of Old World monkey. Gorillas are ground-dwelling, predominantly herbivorous apes that inhabit the forest of central Sub-Saharan Africa. Also, The chimpanzee (Pan troglodytes), also known as the common chimpanzee, robust chimpanzee, or simply chimp, is a species of great ape native to the forest and savannah of tropical Africa. Meanwhile, it is seen that anatomically and physiologically, Rhesus monkeys are related to human beings. Also, the closest relatives of gorillas are the other two Homininae genera, chimpanzees and humans, all of them having diverged from a common ancestor about 7 million years ago. Human gene sequences differ only 1.6% on average from the sequences of corresponding gorilla genes, but there is a further difference in how many copies each gene has.

(b) Advantage of the micro-level knowledge of protein and genes of the related organism also indicates the close relationship between the organisms and their classification, and it also helps in assigning the similarities and differences between two individuals.

7. Name the process represented in the following illustration. Write the peculiarity of the image formed in the labelled sense organ. Answer: This image represents the path of impulses from both the retinas/eye to the brain. When an image from two sides of the same object are formed in the right and the left eye, they are combined in the visual area of the cerebrum in the brain to create a three-dimensional image of the object. This is Binocular vision. Usually, inverted images are formed at the back of our eye, but here that is not the case.

8. “Some specific process during Meiosis helps to create variation in character among organisms.”

a. Analyse this statement and explain the process.
b. What happens if sudden changes occur in chromosome number and structure? Cite examples

Answer: (a) Meiosis is a cell division process, which takes place in two phases resulting in the creation of 4 haploid gametes. This two-step procedure will reduce the number of chromosomes into half, thus resulting in the formation of egg and sperm cells. The chromosome count goes from 46 to 23. This is one of the reasons why human embryo has 46 chromosomes from birth.

9. Match the item in column B and C with systems of treatment given in column A.

(b) Used to restore the health of the sick

10. Analyse the observation report given in the lab record of Laya.

Answer: (a)The presence of glucose in the urine can be a sign of diabetes and testing a urine sample with Benedict’s reagent is a simple way of checking for the existence of glucose in people. This is a solution of copper sulfate, sodium carbonate and sodium citrate in water.

(c) Failure of the pituitary gland leads to this condition

11. Observe the graphical representation of the amount of urine excreted from a person in different season and answer the question given below:

Answer: a) The season at which B appears is Cold climate, monsoon or winter while C appears in hot weather or summer

c) The deficiency of hormone that leads to excessive loss of water through urine is anti-diuretic hormone is ADH.

12. Observe the flow chart and answer the question below: Answer: a) adapted to cool and cold desert environment

14. Observe the illustration given below and answer the three questions. 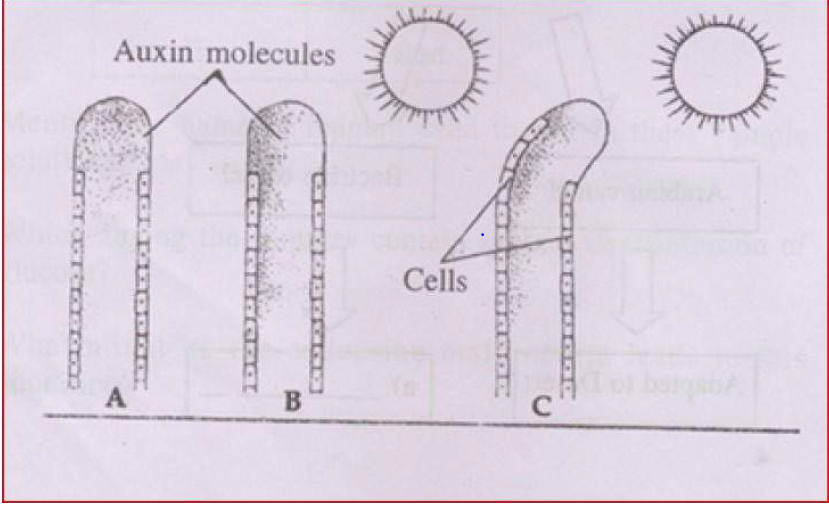 a. What kind of hormone action is represented in the illustration?
b. Draw the opposite action of these hormones in the plant root.
c. List out some artificial plant hormones that can be utilised in agriculture.

Answer: (a) Auxins, a plant hormone found in the stem tip of a plant moves to the darker side of the plant. Auxin is also the hormone that controls the growth of the plant cells. In the shoots, the shaded side contains more auxin and grows longer, thus causing the shoot to bend towards the light.

15. Make a flow chart showing the sequential stages to feel the smell.

16. Observe the following figure and answer the given questions. a. Label A and B.
b. How do they protect your body?

Answer: a) In this image of the structure of the skin, part A is labelled as Hair, and part B is the oil or sebaceous glands

b) Sebum, which is essential for supple skin, also secretes levels of lipids that properly balance to prevent skin irritation. It also provides anti-bacterial and anti-fungal protection. It protects the skin against sunburn, damage caused by UV rays and more.