The question paper has been solved by subject-matter experts by using easy to understand language. Students should refer to the solutions to clear their doubts so that they can write the final exam paper with full confidence. It will also help them to analyse their preparation level. Students can download the pdf of solutions from the link provided below. 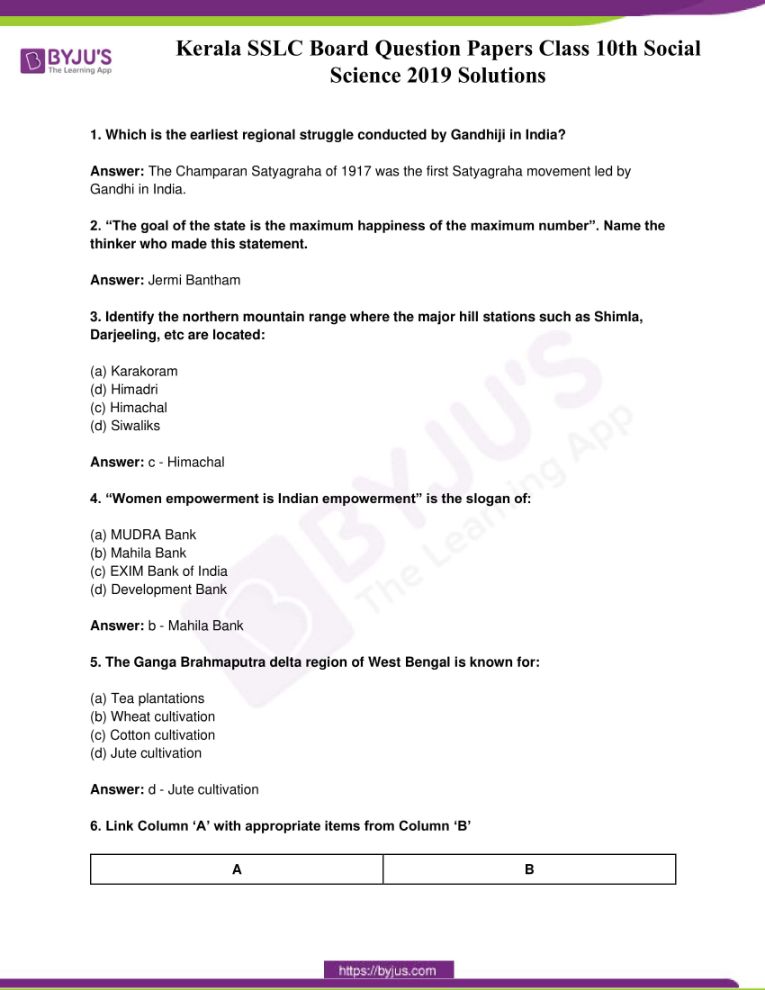 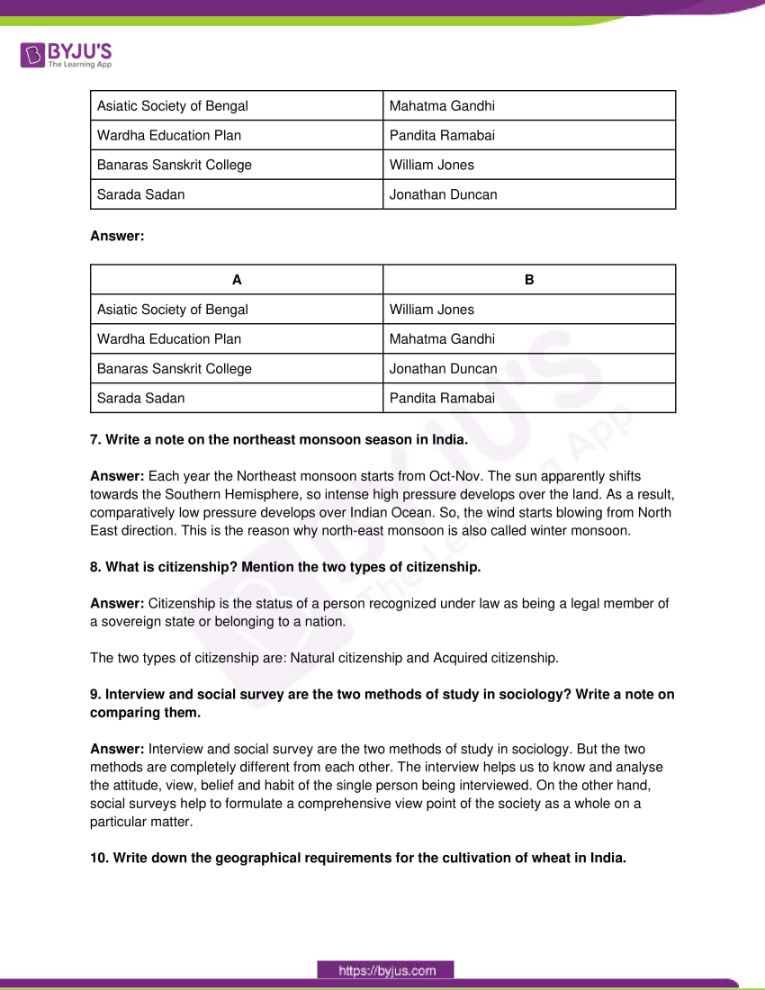 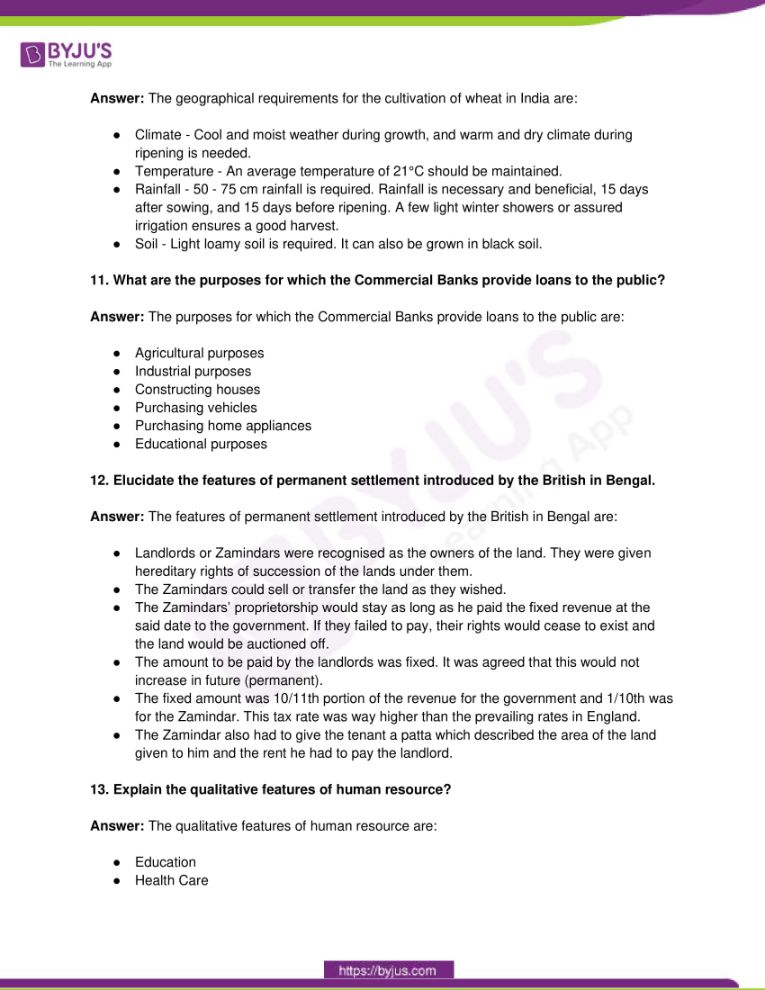 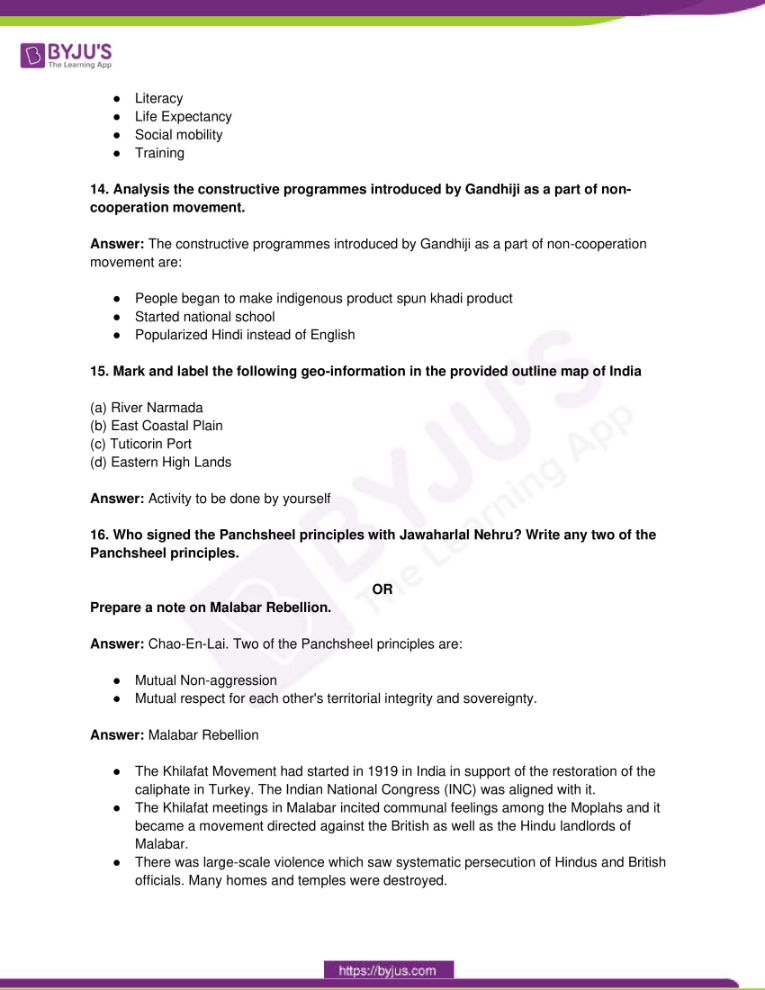 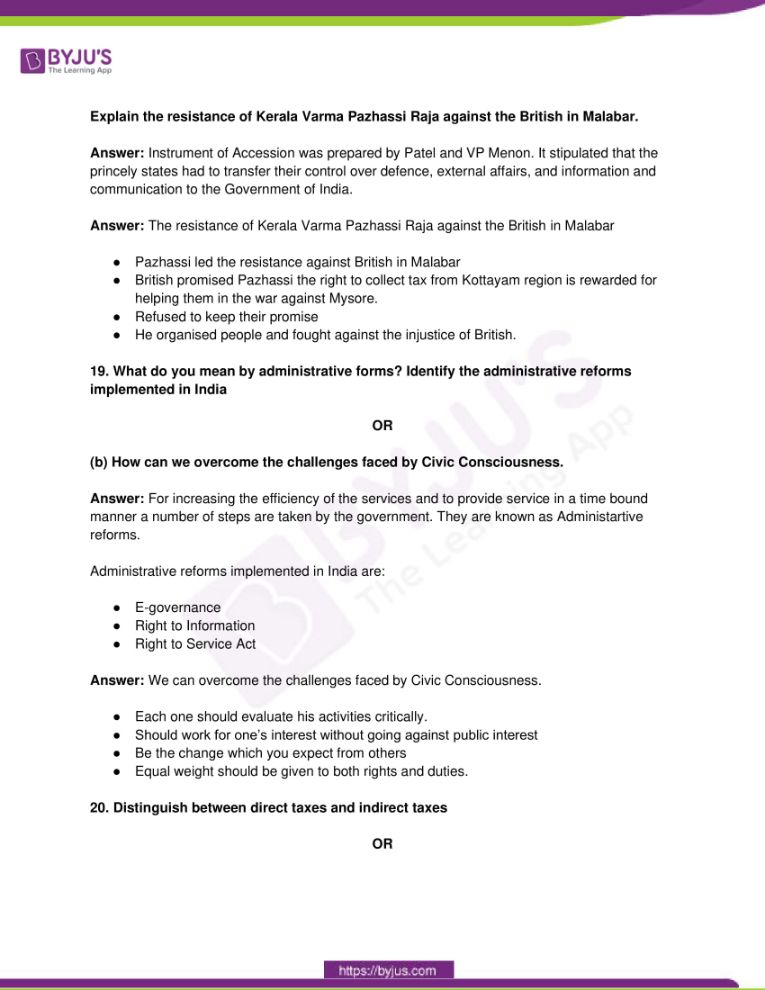 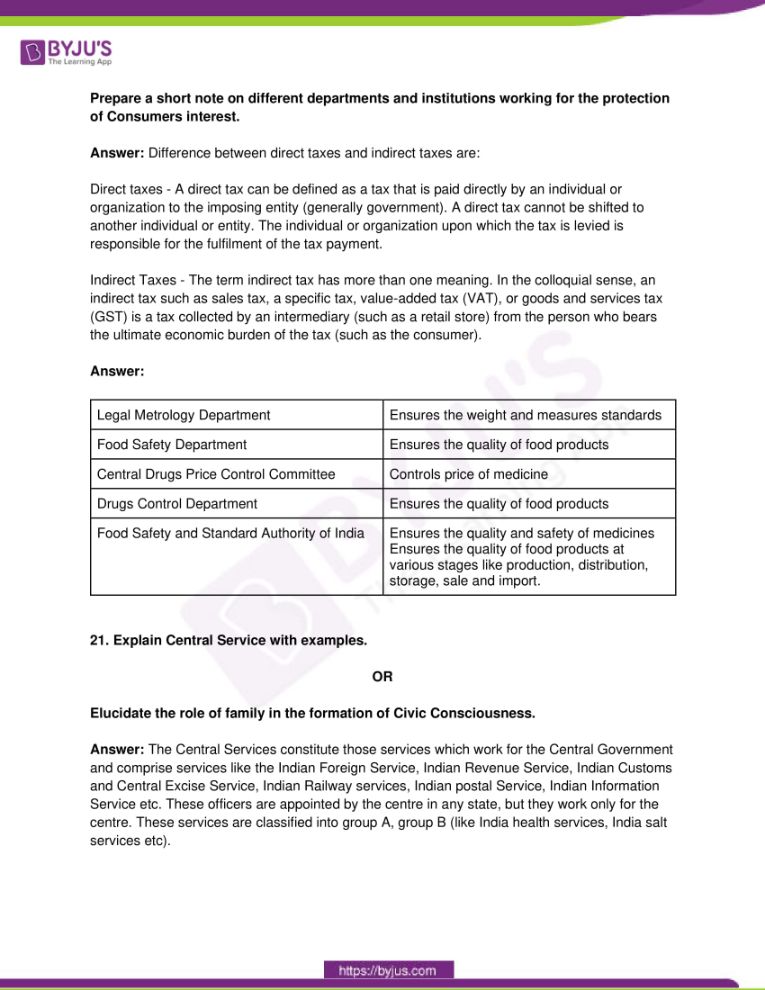 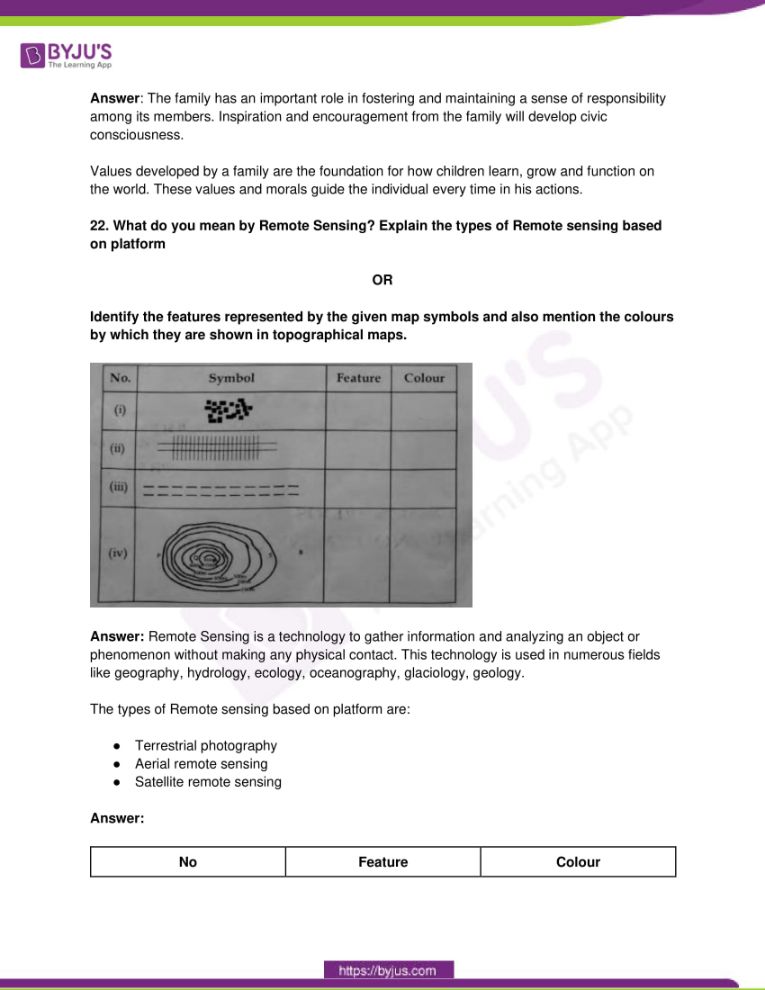 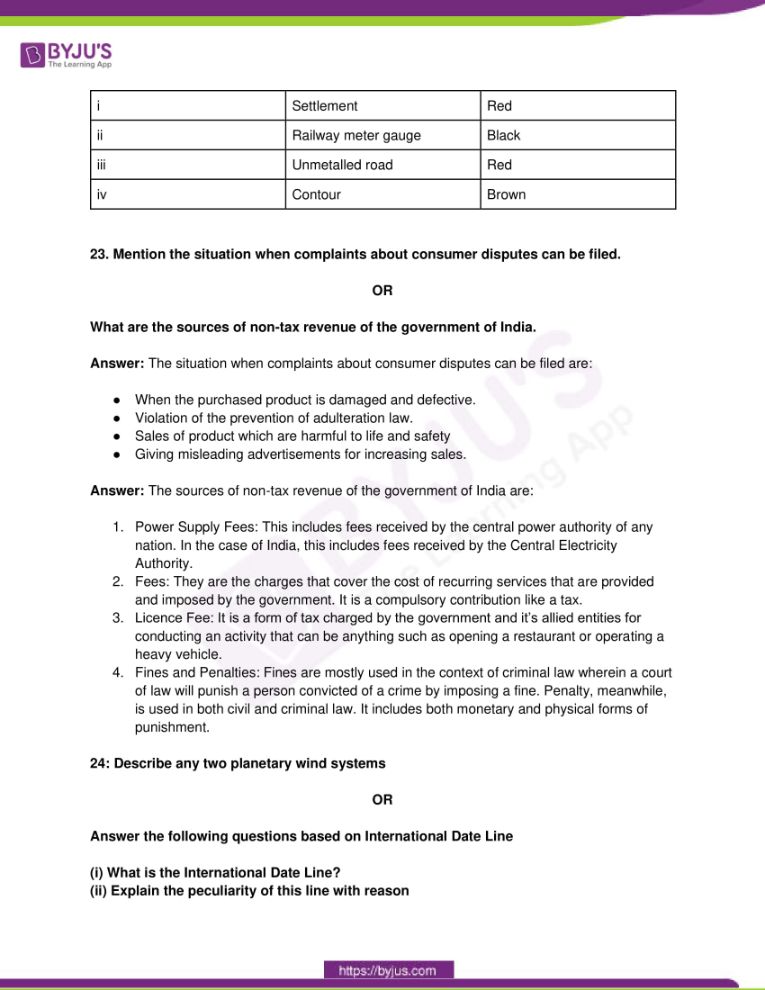 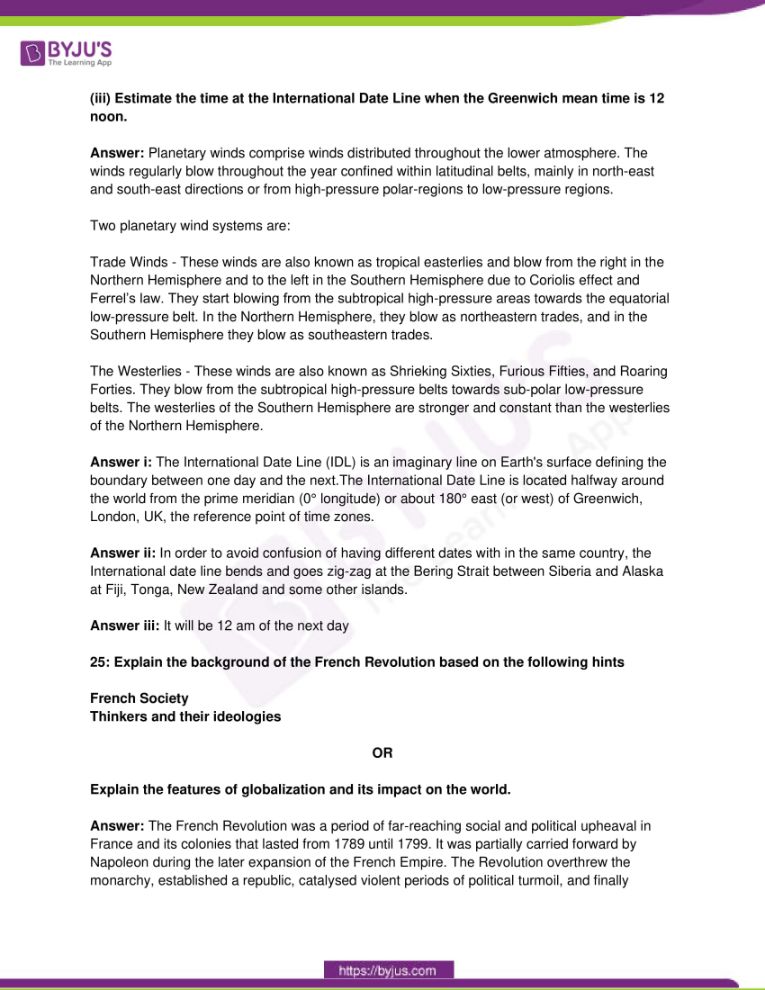 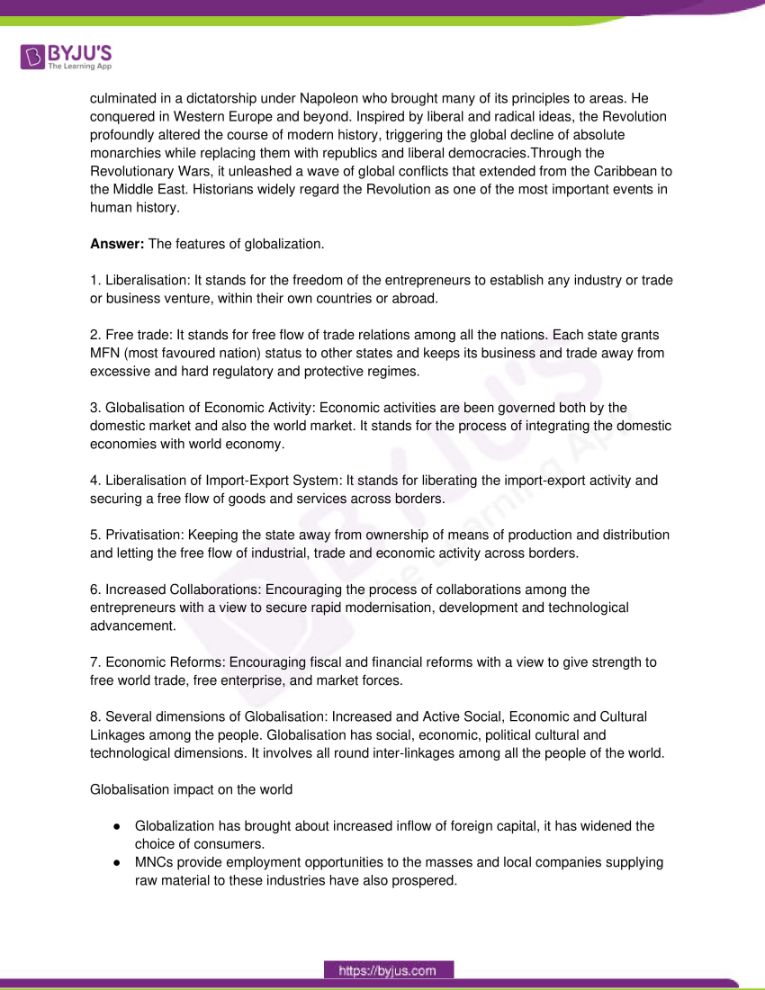 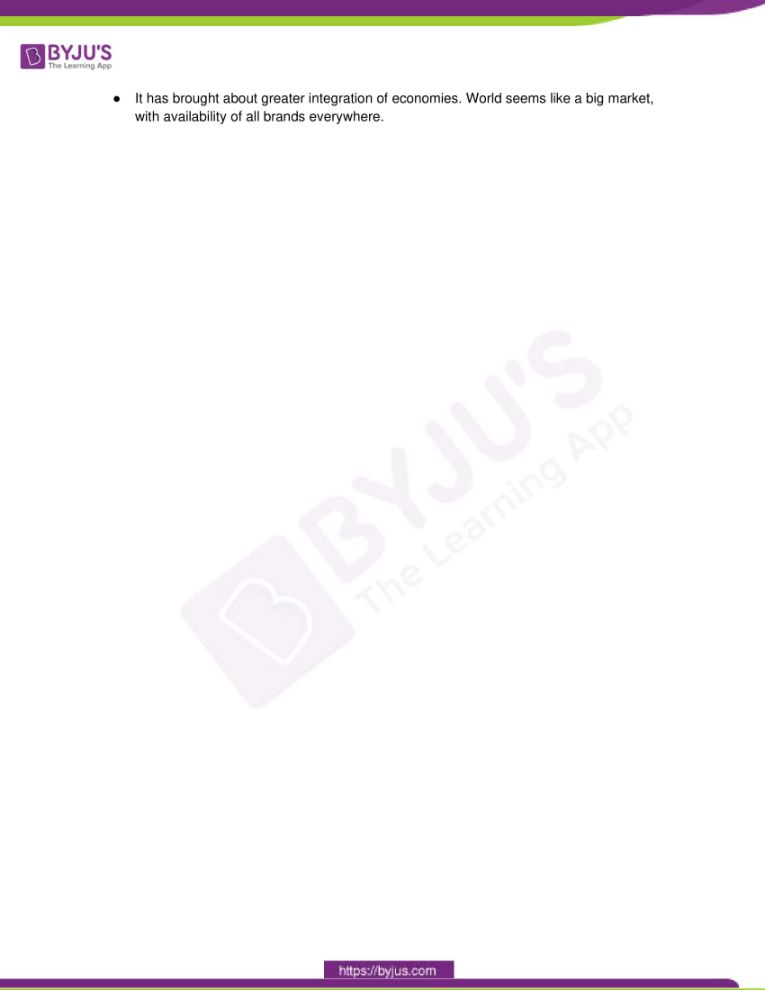 1. Which is the earliest regional struggle conducted by Gandhiji in India?

Answer: The Champaran Satyagraha of 1917 was the first Satyagraha movement led by Gandhi in India.

2. “The goal of the state is the maximum happiness of the maximum number”. Name the thinker who made this statement.

3. Identify the northern mountain range where the major hill stations such as Shimla, Darjeeling, etc are located:

5. The Ganga Brahmaputra delta region of West Bengal is known for:

6. Link Column ‘A’ with appropriate items from Column ‘B’

7. Write a note on the northeast monsoon season in India.

Answer: Citizenship is the status of a person recognized under law as being a legal member of a sovereign state or belonging to a nation.

9. Interview and social survey are the two methods of study in sociology? Write a note on comparing them.

Answer: Interview and social survey are the two methods of study in sociology. But the two methods are completely different from each other. The interview helps us to know and analyse the attitude, view, belief and habit of the single person being interviewed. On the other hand, social surveys help to formulate a comprehensive view point of the society as a whole on a particular matter.

10. Write down the geographical requirements for the cultivation of wheat in India.

Answer: The geographical requirements for the cultivation of wheat in India are:

11. What are the purposes for which the Commercial Banks provide loans to the public?

Answer: The purposes for which the Commercial Banks provide loans to the public are:

12. Elucidate the features of permanent settlement introduced by the British in Bengal.

Answer: The features of permanent settlement introduced by the British in Bengal are:

Answer: The qualitative features of human resource are:

14. Analysis the constructive programmes introduced by Gandhiji as a part of non-cooperation movement.

Answer: The constructive programmes introduced by Gandhiji as a part of non-cooperation movement are:

15. Mark and label the following geo-information in the provided outline map of India

Prepare a note on Malabar Rebellion.

Answer: Chao-En-Lai. Two of the Panchsheel principles are:

17. Why does the atmospheric pressure vary from place to place?

(b) Complete the table appropriately:

18. What is Instrument of Accession. Name the persons who prepared it

Explain the resistance of Kerala Varma Pazhassi Raja against the British in Malabar.

Answer: Instrument of Accession was prepared by Patel and VP Menon. It stipulated that the princely states had to transfer their control over defence, external affairs, and information and communication to the Government of India.

Answer: The resistance of Kerala Varma Pazhassi Raja against the British in Malabar

(b) How can we overcome the challenges faced by Civic Consciousness.

Answer: For increasing the efficiency of the services and to provide service in a time bound manner a number of steps are taken by the government. They are known as Administartive reforms.

Administrative reforms implemented in India are:

Answer: We can overcome the challenges faced by Civic Consciousness.

Prepare a short note on different departments and institutions working for the protection of Consumers interest.

Indirect Taxes – The term indirect tax has more than one meaning. In the colloquial sense, an indirect tax such as sales tax, a specific tax, value-added tax (VAT), or goods and services tax (GST) is a tax collected by an intermediary (such as a retail store) from the person who bears the ultimate economic burden of the tax (such as the consumer).

Elucidate the role of family in the formation of Civic Consciousness.

Answer: The family has an important role in fostering and maintaining a sense of responsibility among its members. Inspiration and encouragement from the family will develop civic

Values developed by a family are the foundation for how children learn, grow and function on the world. These values and morals guide the individual every time in his actions.

22. What do you mean by Remote Sensing? Explain the types of Remote sensing based on platform

Identify the features represented by the given map symbols and also mention the colours by which they are shown in topographical maps. 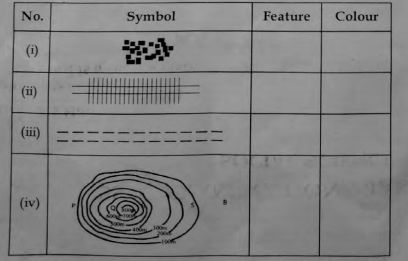 Answer: Remote Sensing is a technology to gather information and analyzing an object or phenomenon without making any physical contact. This technology is used in numerous fields like geography, hydrology, ecology, oceanography, glaciology, geology.

The types of Remote sensing based on platform are:

23. Mention the situation when complaints about consumer disputes can be filed.

What are the sources of non-tax revenue of the government of India.

Answer: The situation when complaints about consumer disputes can be filed are:

Answer: The sources of non-tax revenue of the government of India are:

Answer the following questions based on International Date Line

(i) What is the International Date Line?

(ii) Explain the peculiarity of this line with reason

(iii) Estimate the time at the International Date Line when the Greenwich mean time is 12 noon.

Answer: Planetary winds comprise winds distributed throughout the lower atmosphere. The winds regularly blow throughout the year confined within latitudinal belts, mainly in north-east and south-east directions or from high-pressure polar-regions to low-pressure regions.

Answer ii: In order to avoid confusion of having different dates with in the same country, the International date line bends and goes zig-zag at the Bering Strait between Siberia and Alaska at Fiji, Tonga, New Zealand and some other islands.

Answer iii: It will be 12 am of the next day

25: Explain the background of the French Revolution based on the following hints

Thinkers and their ideologies

Explain the features of globalization and its impact on the world.

Answer: The French Revolution was a period of far-reaching social and political upheaval in France and its colonies that lasted from 1789 until 1799. It was partially carried forward by Napoleon during the later expansion of the French Empire. The Revolution overthrew the monarchy, established a republic, catalysed violent periods of political turmoil, and finally culminated in a dictatorship under Napoleon who brought many of its principles to areas. He conquered in Western Europe and beyond. Inspired by liberal and radical ideas, the Revolution profoundly altered the course of modern history, triggering the global decline of absolute monarchies while replacing them with republics and liberal democracies.Through the Revolutionary Wars, it unleashed a wave of global conflicts that extended from the Caribbean to the Middle East. Historians widely regard the Revolution as one of the most important events in human history.

Answer: The features of globalization.

1. Liberalisation: It stands for the freedom of the entrepreneurs to establish any industry or trade or business venture, within their own countries or abroad.

2. Free trade: It stands for free flow of trade relations among all the nations. Each state grants MFN (most favoured nation) status to other states and keeps its business and trade away from excessive and hard regulatory and protective regimes.

3. Globalisation of Economic Activity: Economic activities are been governed both by the domestic market and also the world market. It stands for the process of integrating the domestic economies with world economy.

4. Liberalisation of Import-Export System: It stands for liberating the import-export activity and securing a free flow of goods and services across borders.

5. Privatisation: Keeping the state away from ownership of means of production and distribution and letting the free flow of industrial, trade and economic activity across borders.

6. Increased Collaborations: Encouraging the process of collaborations among the entrepreneurs with a view to secure rapid modernisation, development and technological advancement.

7. Economic Reforms: Encouraging fiscal and financial reforms with a view to give strength to free world trade, free enterprise, and market forces.

Globalisation impact on the world