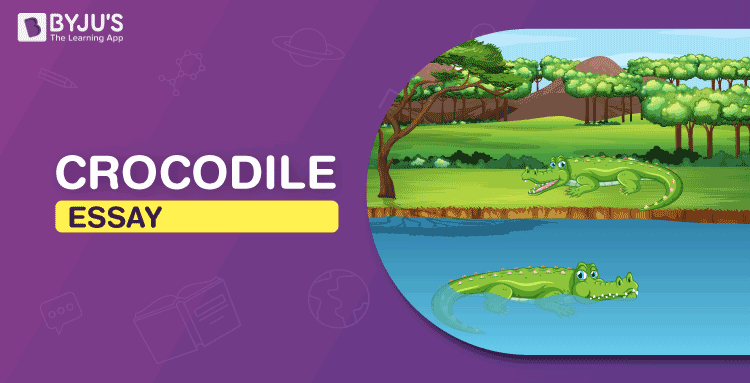 Crocodiles are extremely dangerous. They usually live in freshwater but can also live in saltwater. Crocodiles have sharp teeth that are perfect for tearing flesh and crushing bones. They use their long tails to propel themselves while swimming across the water’s surface and underwater. The crocodile is a reptile with a flat and wide head consisting of two fused sections, with a tough layer of skin on the upper part. It has short legs, which have three toes each. The tail can be pushed inside or outside of the body for protection or to help in swimming. The essay on crocodile helps children understand one of the massive reptiles on Earth. The essay on crocodile for kids is about the features of a crocodile.

It also mentions that while a crocodile is usually mistaken as a dangerous animal, in reality, they are not. People who lived during the old period hunted and killed crocodiles because they thought that they would harm crops and livestock. The essay also mentions that crocodiles can be found worldwide, but they are more likely to be found in and around water bodies.

They can grow up to 23 feet in length and weigh over 1,000 pounds. Crocodiles have a protective hard shell around their body but scales or bony plates on their heads. Crocodiles use their sharp teeth to catch fish, amphibians, birds, and mammals.

Crocodiles are among the largest reptiles in the world but can be very small in size in some others. They have a long snout. Crocodiles mostly live in water, but they can also be found on dry land. Crocodiles are cold-blooded reptiles with scaly skin. They are also called ‘living fossils’ as they have been living on Earth from the time of dinosaurs.

To conclude, crocodiles are ponderous and appear similar to lizards. Kids would be interested to learn more about these reptiles. For similar essays and kids learning activities, visit BYJU’S website.

What are some interesting facts about crocodiles?

Crocodiles are the largest living reptiles. They have an incredibly long lifespan, over 70 years old and weigh more than a thousand kgs.

How long can a crocodile grow?

A crocodile can grow up to 23 feet.