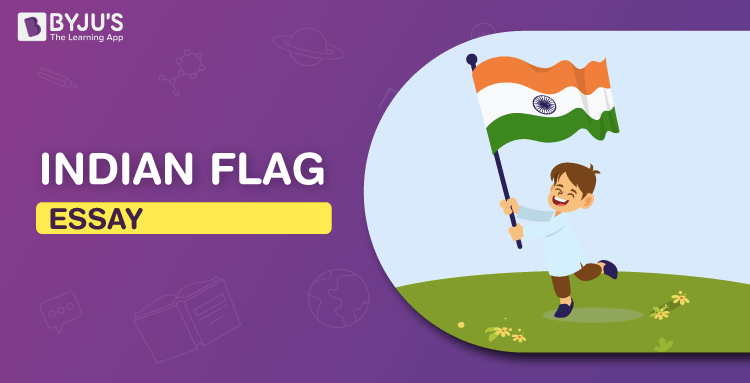 This essay on Indian national flag is a must-read for all the little ones. Moreover, an essay about Indian flag helps children learn the history of the national flag. The Indian flag is a horizontal tricolour of saffron on the top, white in the middle and green at the bottom. It was adopted in its present form during a meeting of the Constituent Assembly which was held on 22 July 1947, which was just a few days prior to Indian independence from the British Raj on 15 August 1947.

The Indian flag is an important symbol for the country. It is a symbol of the unity of the people of India in spite of the differences in language, religion, culture etc. The saffron colour represents the strength and courage of the nation. The white colour stands for peace, purity, and integrity. Finally, the green colour reflects the fertility and auspiciousness of Indian land.

The Indian flag is a symbol of pride and patriotism for Indians. There are regulations on how it should be treated and proper ways of displaying it to maintain respect for the flag. The rules state that the flag should never touch anything beneath it, including the ground. Citizens are also not allowed to wrap it around their bodies. This short essay on Indian national flag helps kids learn how to use the national flag in the right way.

Pingali Venkaiah designed the Indian National Flag in the year 1947. It has a deep-saffron-coloured rectangle on top of a white canvas, and in the middle of this, there is a wheel in navy blue. There are twenty-four spokes in this wheel, and they represent the twenty-four hours in a day, and it is also known as the ‘Wheel of Time’.

The Constituent Assembly in India made an important decision in 1947 regarding the national flag. This resolution decided to keep the same colours but replace the spinning wheel with an eternal one. The Ashoka Chakra, meaning Ashoka’s wheel of law, signifies the country’s progress for centuries to come.

When children read BYJU’S essay on Indian flag, they improve their knowledge about the national flag and their vocabulary.

Display of the National Flag of India

As per the Indian Flag Code, the national flag can be flown on all days of the year, including Sundays and national holidays. It is flown on an open flagstaff at least 20 feet above ground level. It may also be hoisted on a building of any structure but must not touch the ground.

India’s national flag is the pride and joy of every citizen. It represents the sovereignty and integrity of our country and deserves utmost reverence and respect. Each day we are proud to watch the resilient banner fly over us, knowing how it pays tribute not just on days of national significance but even on typical days when portraying colours in their traditional form expresses so much.

Importance of the Indian National Flag

The Indian flag has a deep significance to the country and the people. It is one of the most attractive flags globally, with vibrant colours and symbols. The colours in the flag represent India’s diverse range of languages, cultures and religions.

What are the three colours of the Indian national flag?

The three colours in the Indian national flag are saffron on the top, white in the middle and green at the bottom.

Who designed the Indian flag?

Pingali Venkaiah designed the Indian National Flag in the year 1947.