Essay on Policeman for Children 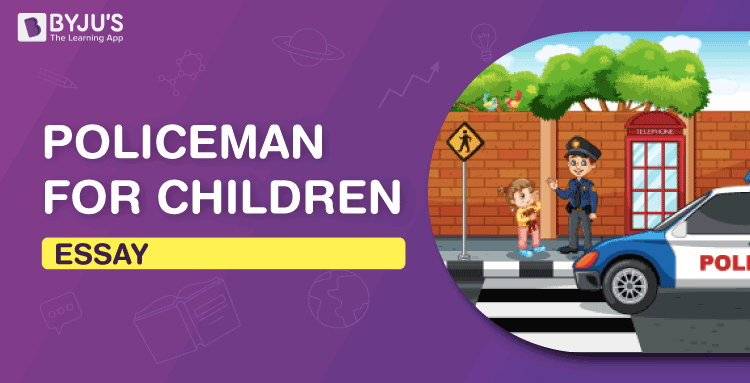 Police officers play a vital role in society. They keep people safe from dangerous criminals and gather information to help prevent crime. A policeman is an individual who enforces the law. They carry a means of protection, such as a gun or baton, and have a badge that helps identify them as law enforcement officials. The job requires physical strength, courage and persistence to complete their tasks. BYJU’S essay on policeman aids the little ones to comprehend the role of policemen and their importance.

As stated in the introduction, the purpose of a policeman is to enforce laws. The law enforcement profession is one of the essential services in society. Policemen have the power to impose the law and punish people if they break the law, or they can protect life, property, human rights etc.

Essay on policeman for kids teaches the little ones the significance of policemen and their role in society. Policemen play an essential role in society. They contribute a great service to the society by maintaining peace and order. Undoubtedly, they are the ones who make us feel safe and protected by providing physical protection when needed. And, they put themselves into dangerous situations where they might be shot at and killed. The stress on these individuals is high because of this.

Police officers investigate crimes and try to decrease crime rates. In addition, they help our communities by acting as first-responders for any type of emergency.

Police officers protect the public, especially when there is an emergency. This can mean stopping a crime or apprehending a criminal. To help find criminals and prevent crime, police officers need tools and support that help them do their jobs. An essential tool is likely the police car. Police cars have an array of safety features, including headlights that shine in all directions and patrols for signs of crime, such as broken windows or sightings of crime scenes. Police cars also come with computers, guns, and handcuffs that help officers keep safe when pursuing suspects or apprehending offenders.

Policemen have many responsibilities. They have to protect people from danger, prevent crime, and solve crimes. A policeman has to do many different types of tasks daily. They might be in charge of escorting people back to their homes if they live in an unsafe area or investigating a crime scene for clues about who committed it.

A policeman’s role is to ensure that the community stays safe and criminals are punished. They do this by enforcing the law, fighting crime, preventing crimes, and maintaining order.

The role of the police has changed over time. In the 1800s, they were mainly concerned with keeping the peace and maintaining order. Nowadays, they are only allowed to enforce the law and arrest if they witness a crime in progress. They are also often called in natural disasters or large-scale protests where riots might occur. This is an essay on the policeman for the little ones that play a vital role in kids learning phase and ensure to visit BYJU’S website for more essays.

Frequently Asked Questions on Essay on Policeman for Children

Who is known as the ‘Father of Modern Policing’?

Sir Robert Peel is the father of modern policing.

Who was the first woman police officer in the world?

Edith Smith was the first woman police officer in the world.

What do children learn from BYJU’S essay on policeman?

BYJU’S essay on the policeman is an excellent way to teach the little ones the value and contribution of police officers to society.