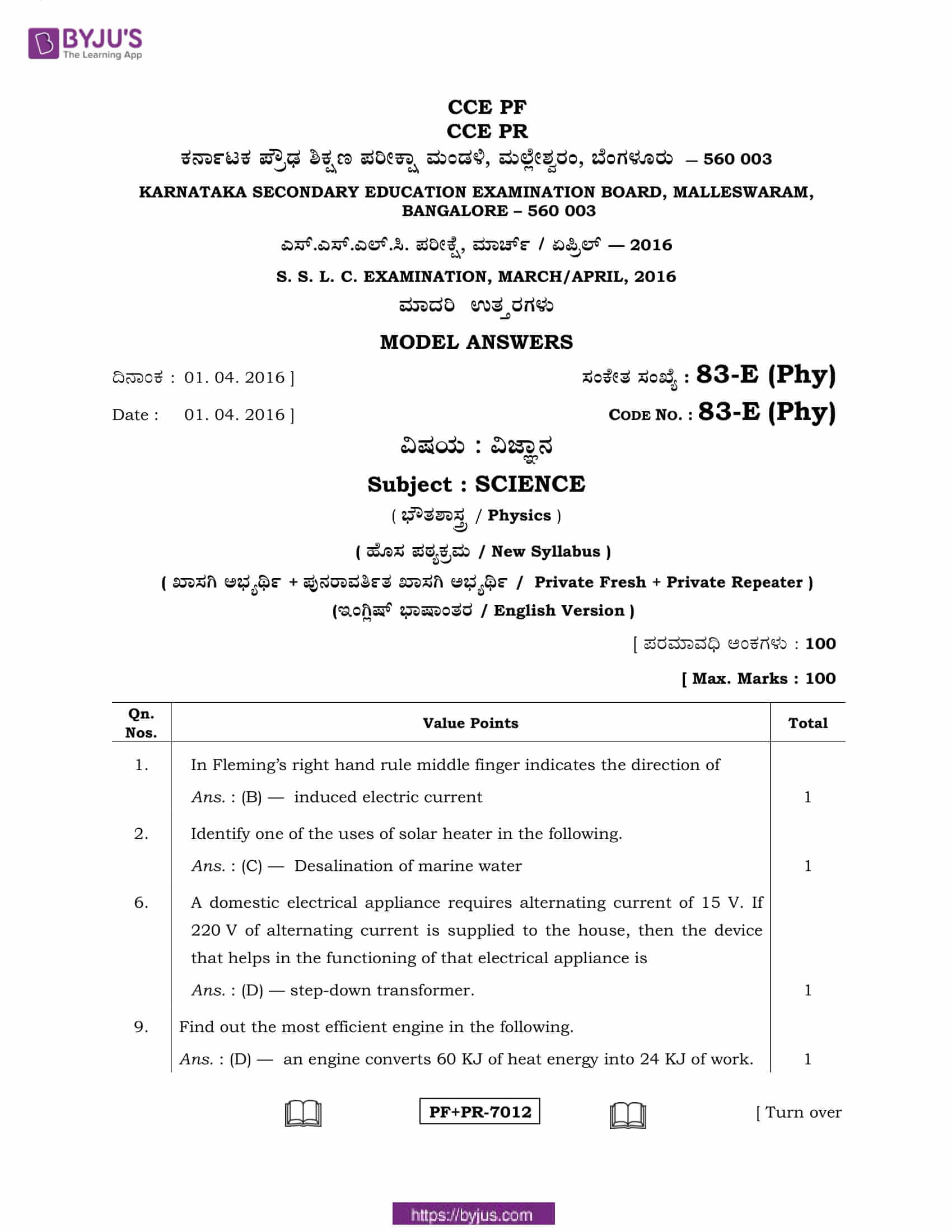 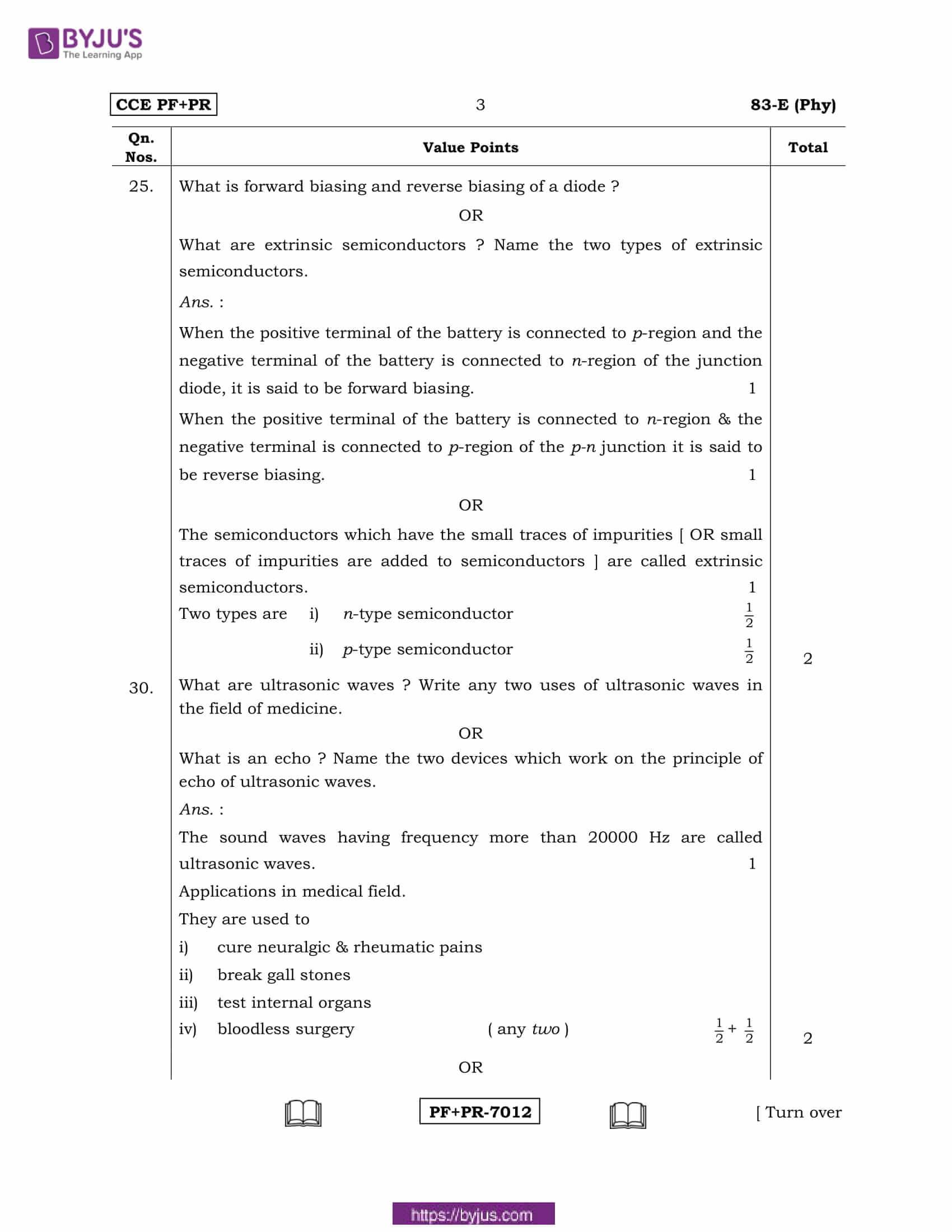 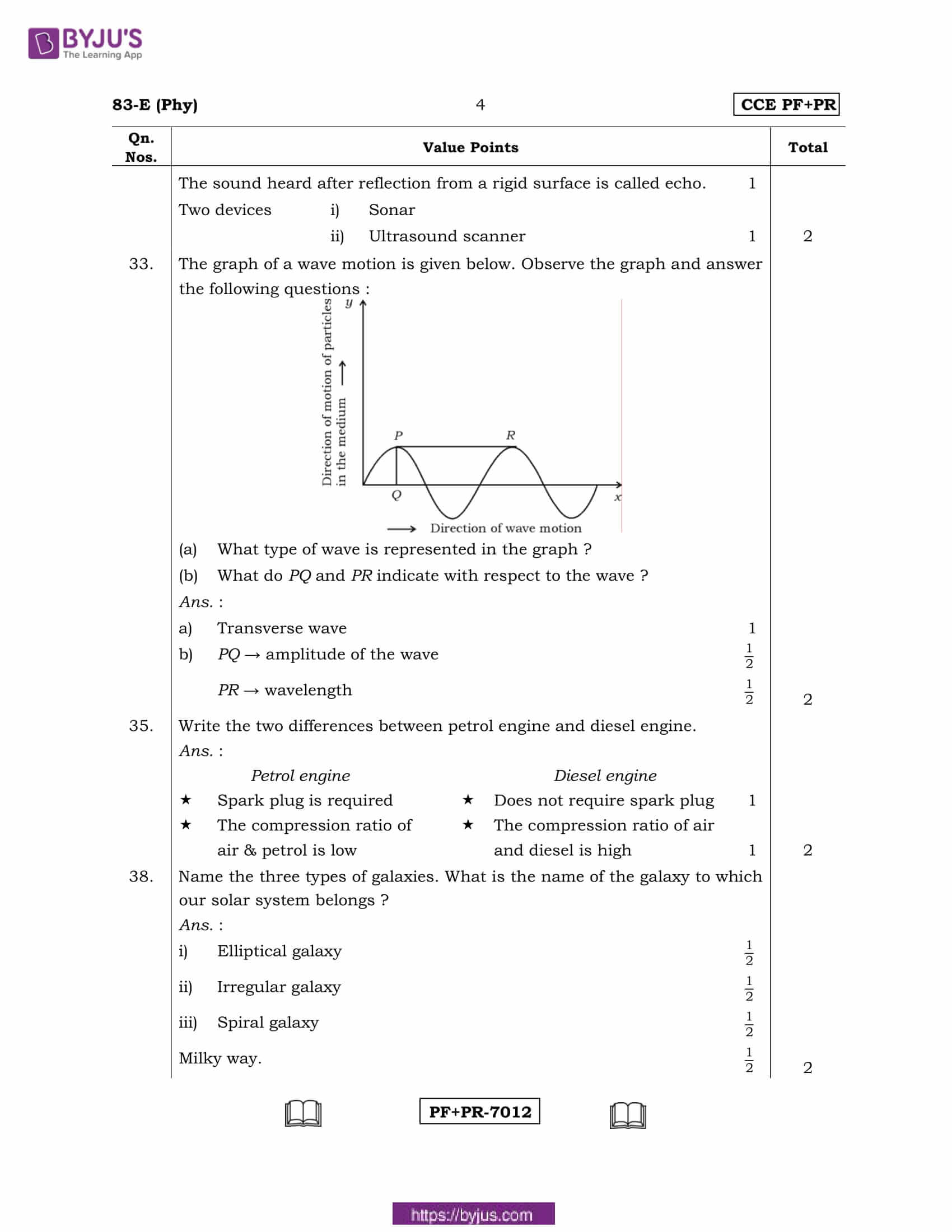 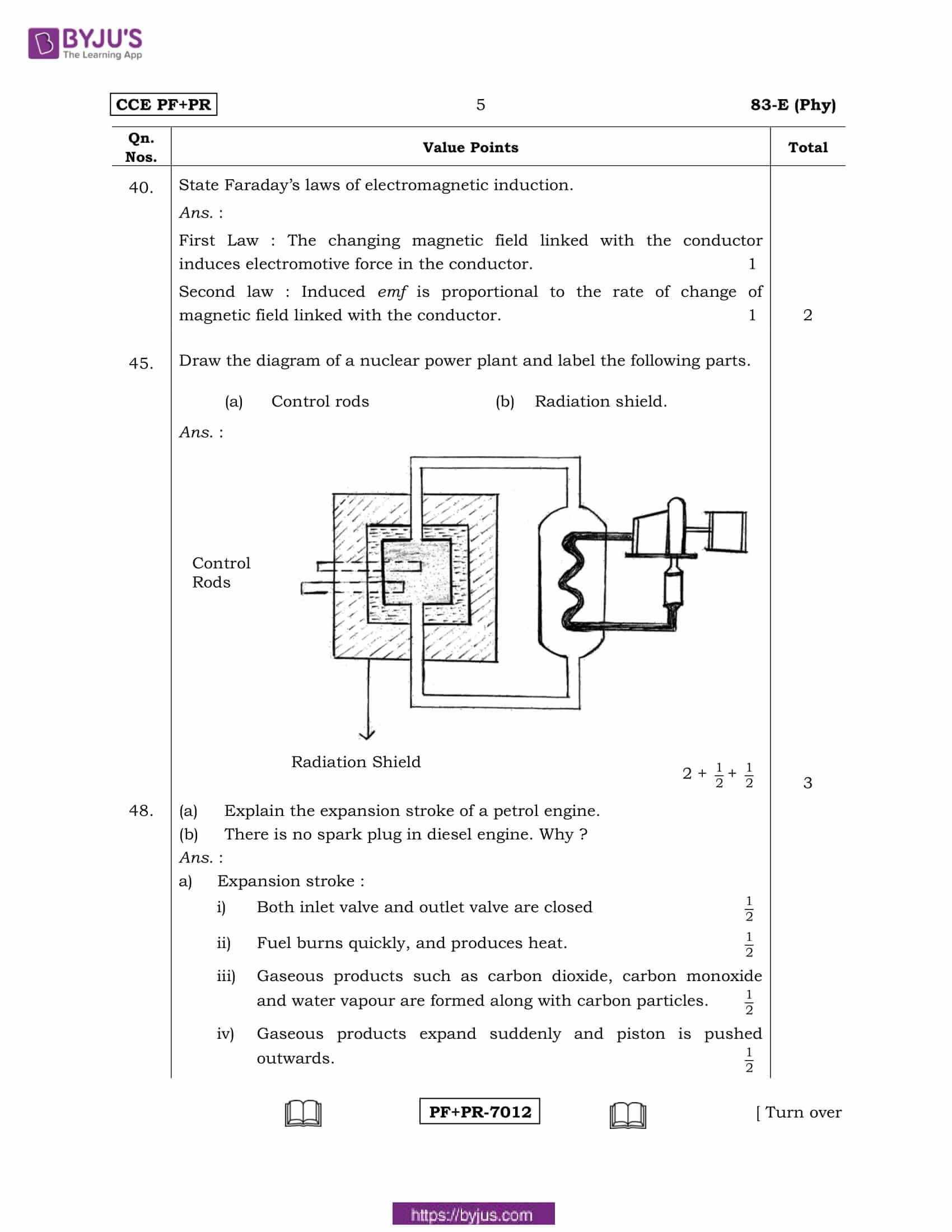 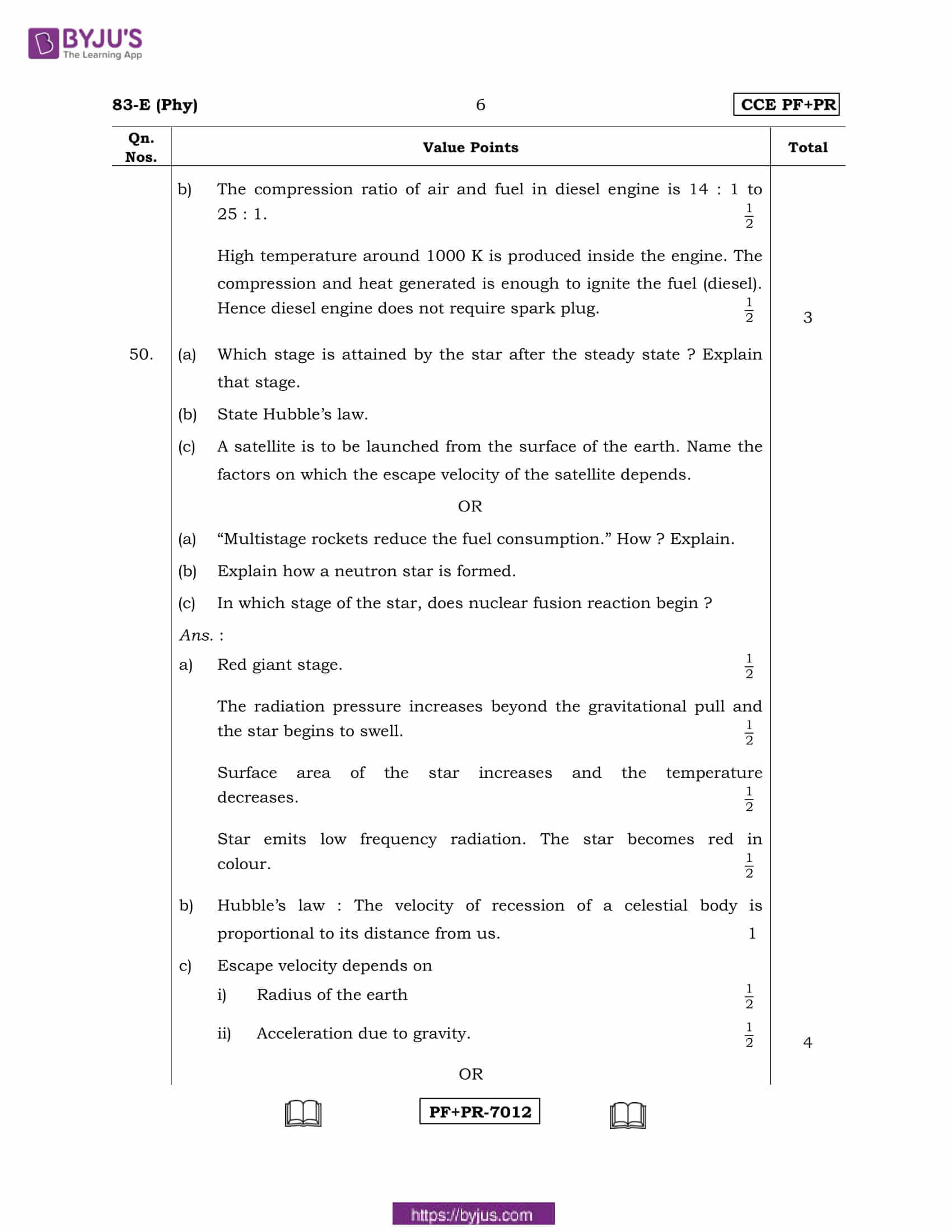 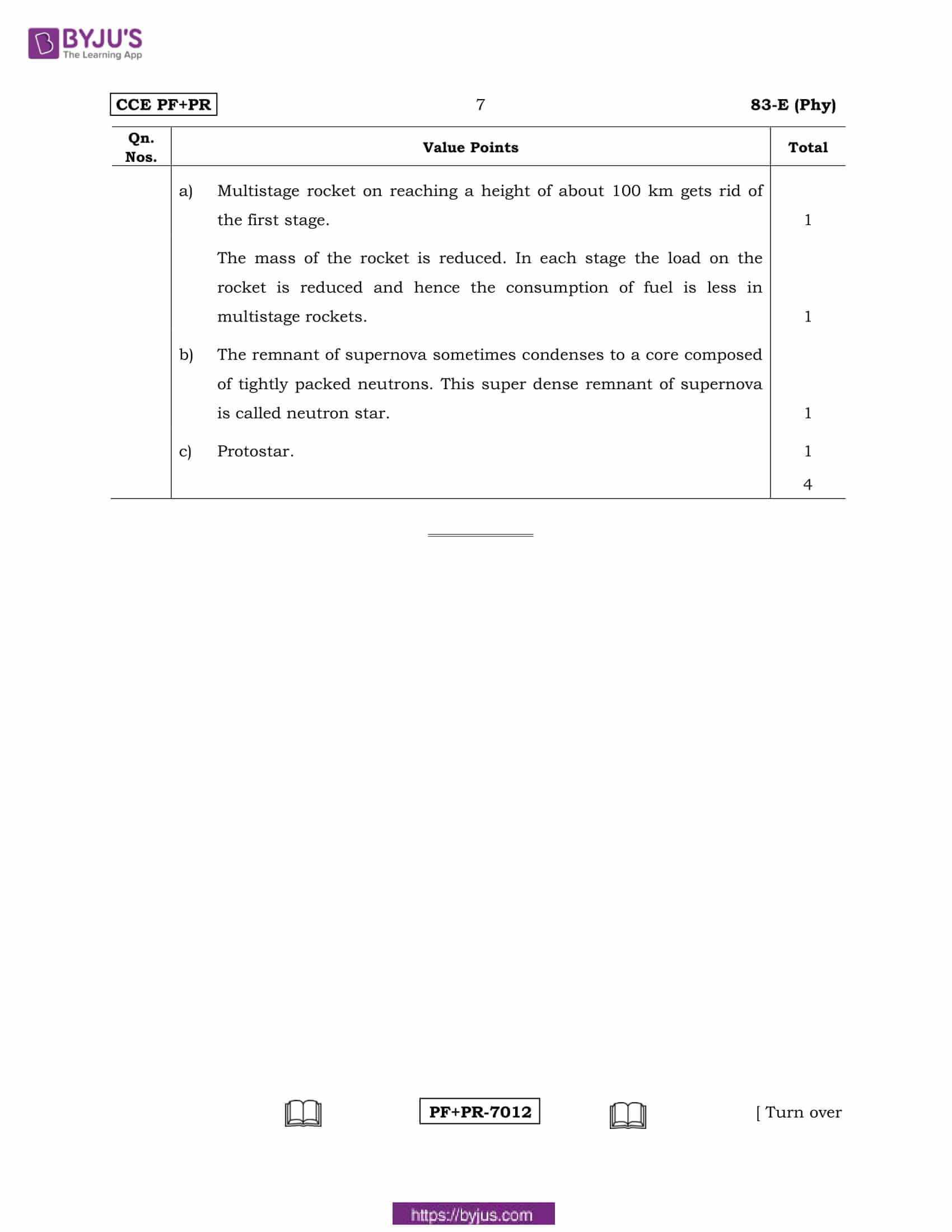 Four alternatives are given for each of the following questions / incomplete statements. Only one of them is correct or most appropriate. Choose the correct alternative and write the complete answer along with its letter in the space provided against each question.

(D) motion of the conductor.

2. Identify one of the uses of solar heater in the following.

(A) Conversion of solar energy into electrical energy

(B) Providing energy for artificial satellites

9. Find out the most efficient engine in the following.

12. Write any two advantages of bio-energy.

Answer: When the source of light waves move away from the observer, the frequency of light appears to be less. The colour of light shifts to the red end of the spectrum.

19. Draw the diagram of a DC dynamo and label the following parts. 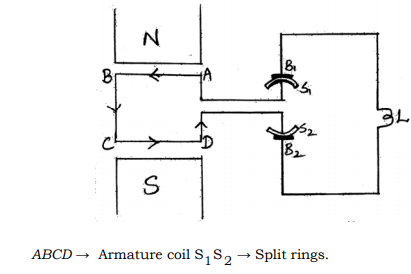 25. What is forward biasing and reverse biasing of a diode?

What is an echo ? Name the two devices which work on the principle of echo of ultrasonic waves.

Answer: The sound waves having frequency more than 20000 Hz are called ultrasonic waves.

Applications in medical field. They are used to

Answer: The sound heard after reflection from a rigid surface is called echo. Two devices

33. The graph of a wave motion is given below. Observe the graph and answer the following questions: 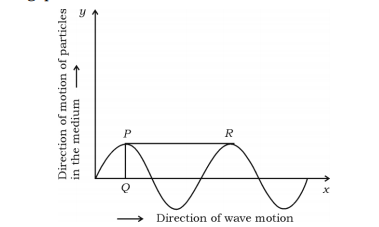 (a) What type of wave is represented in the graph ?

(b) What do PQ and PR indicate with respect to the wave ?

Answer b: PQ → amplitude of the wave

35. Write the two differences between petrol engine and diesel engine.

Answer: The two differences between petrol engine and diesel engine are:

38. Name the three types of galaxies. What is the name of the galaxy to which our solar system belongs?

Answer: The three types of galaxies are:

Milky Way is the name of the galaxy to which our solar system belongs to.

45. Draw the diagram of a nuclear power plant and label the following parts. 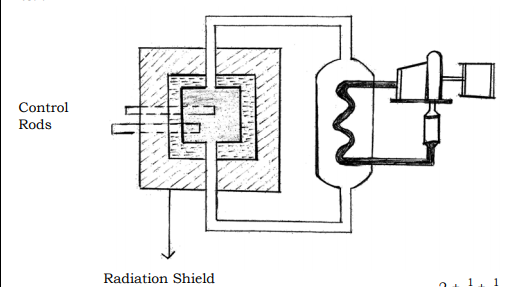 38. (a) Explain the expansion stroke of a petrol engine.

(b) There is no spark plug in diesel engine. Why ?

iii) Gaseous products such as carbon dioxide, carbon monoxide and water vapour are formed along with carbon particles.

Answer b: There is no spark plug in diesel engine

50. (a) Which stage is attained by the star after the steady state ? Explain that stage.

(c) A satellite is to be launched from the surface of the earth. Name the factors on which the escape velocity of the satellite depends.

(a) “Multistage rockets reduce the fuel consumption.” How? Explain.

(b) Explain how a neutron star is formed.

(c) In which stage of the star, does nuclear fusion reaction begin?

Answer b: Hubble’s law: The velocity of recession of a celestial body is proportional to its distance from us.

i) Radius of the earth

ii) Acceleration due to gravity.

Answer a: Multistage rocket on reaching a height of about 100 km gets rid of the first stage.