Here, to help students we have provided solutions to the Social Science 2017 question paper so that they can refer to it whenever they have any doubt. In order to score good marks in their exam, students should solve at least 2-3 years previous year questions to get a real hand on the final exam paper. It also helps to manage their time management skills. 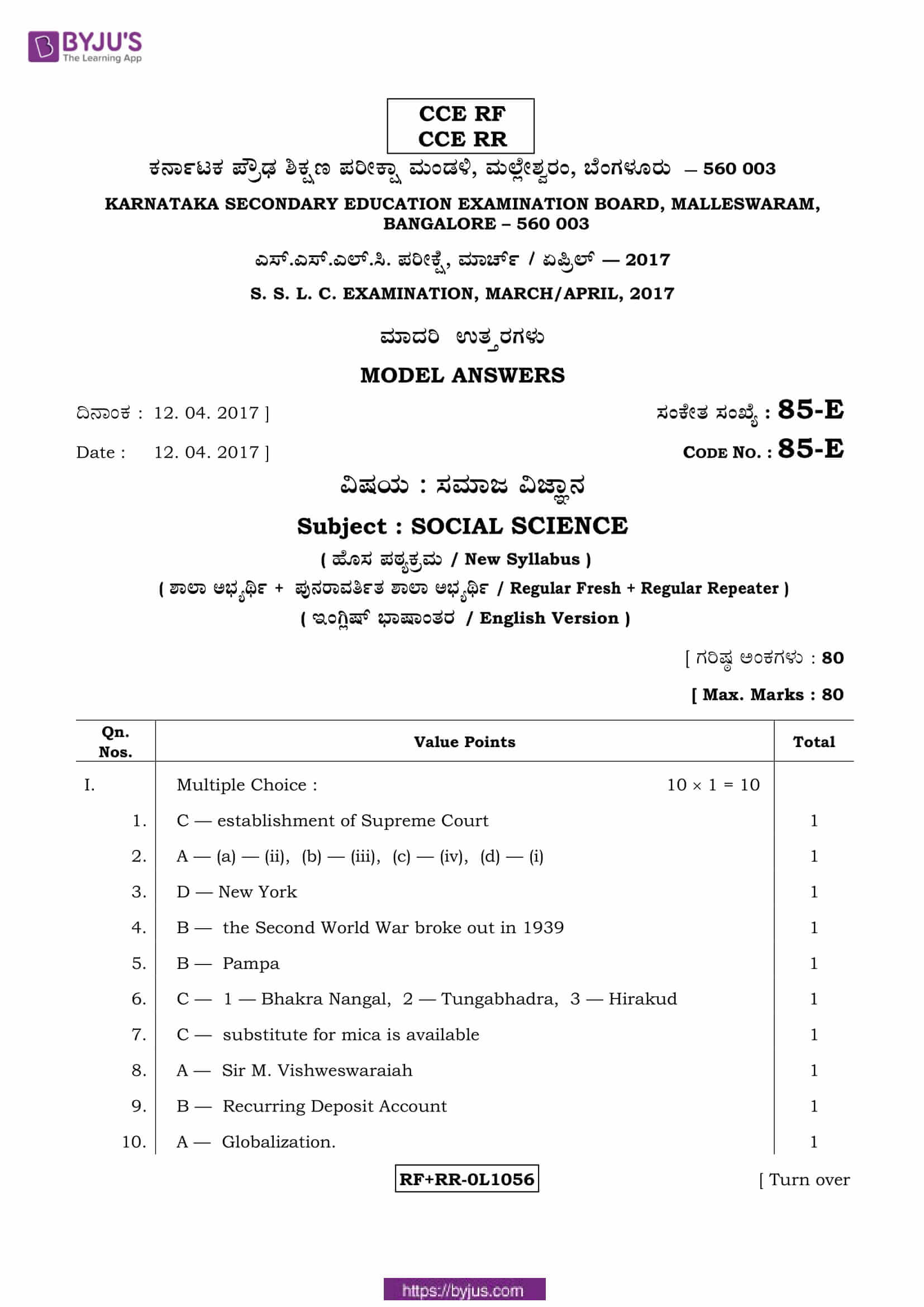 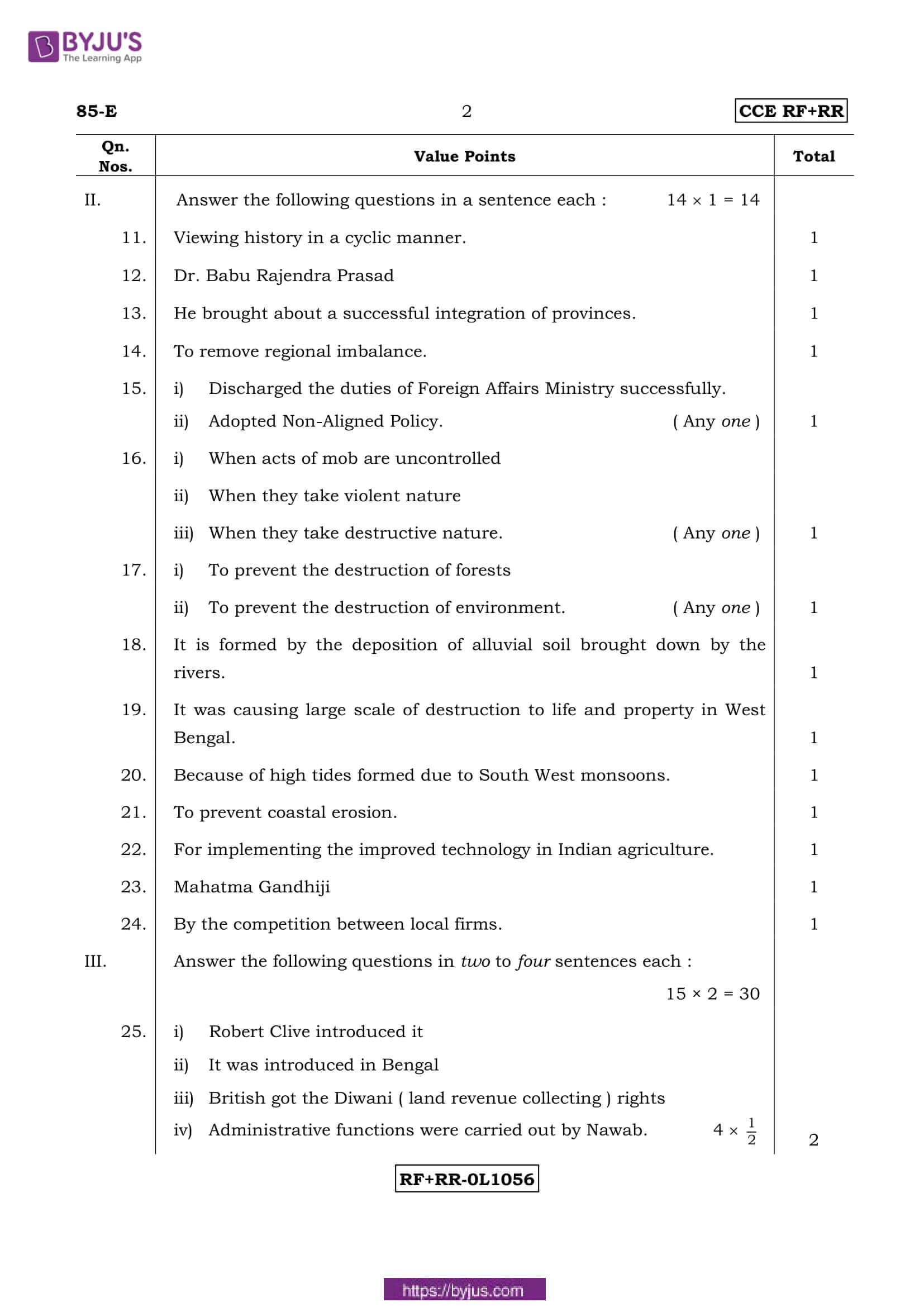 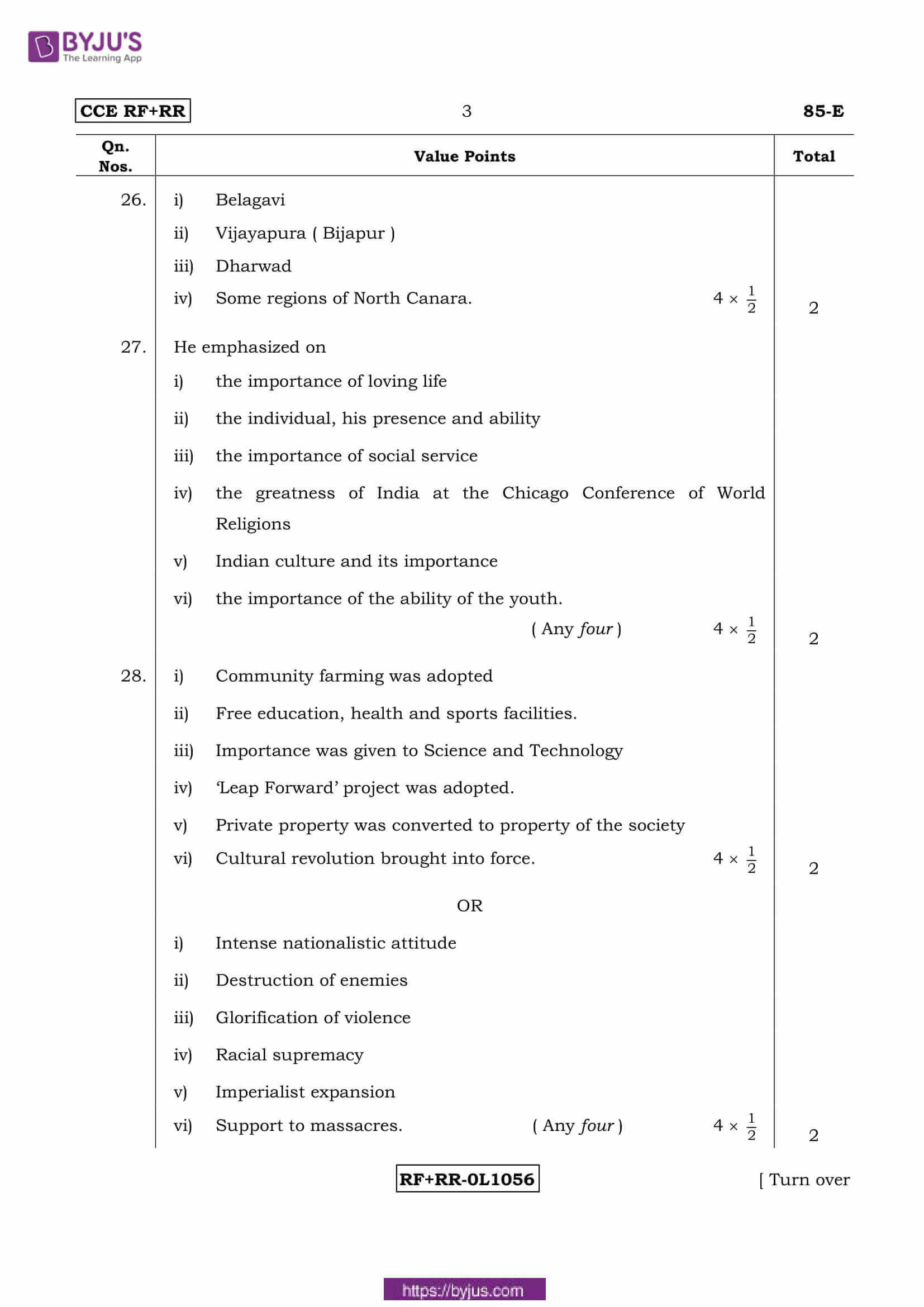 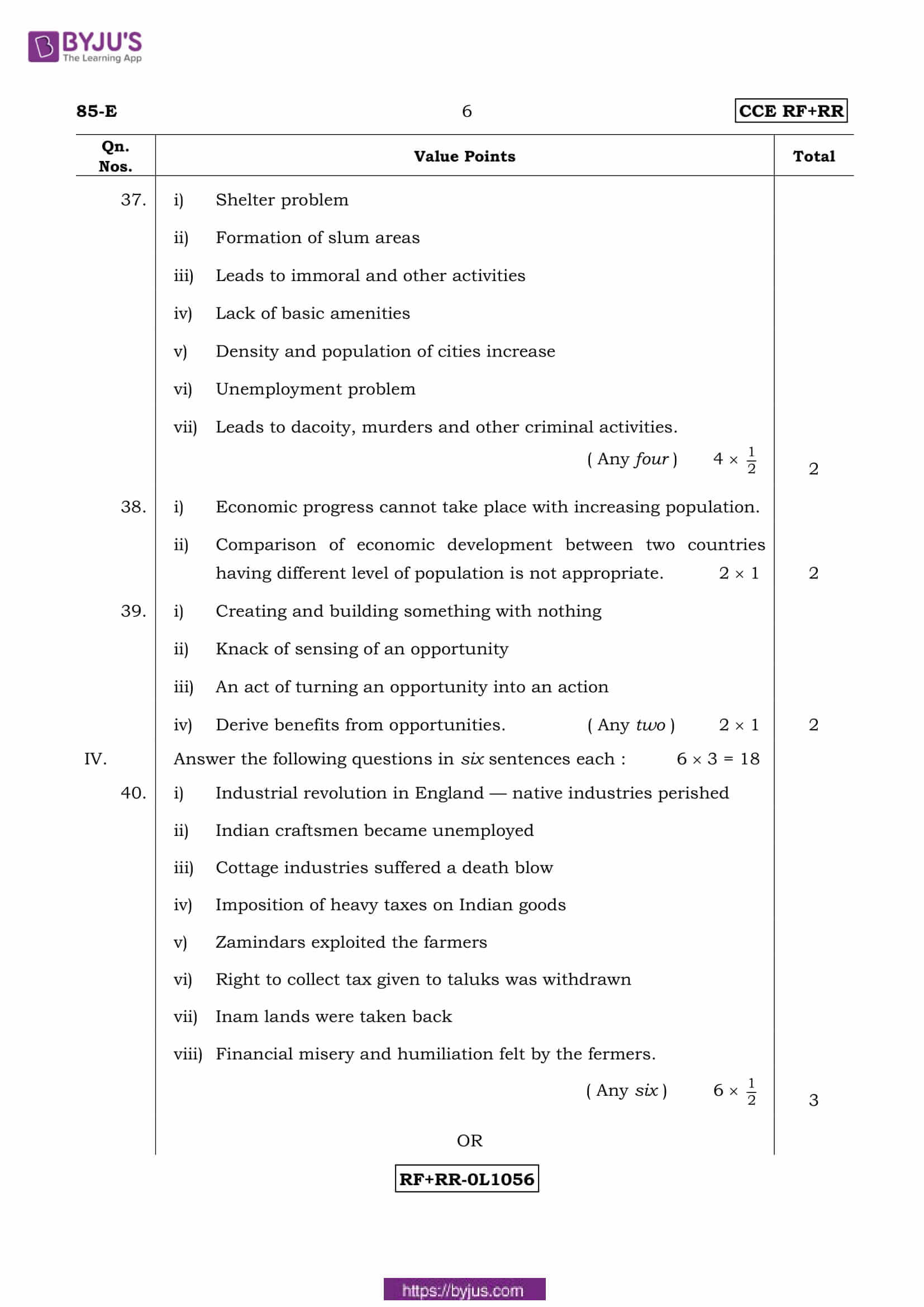 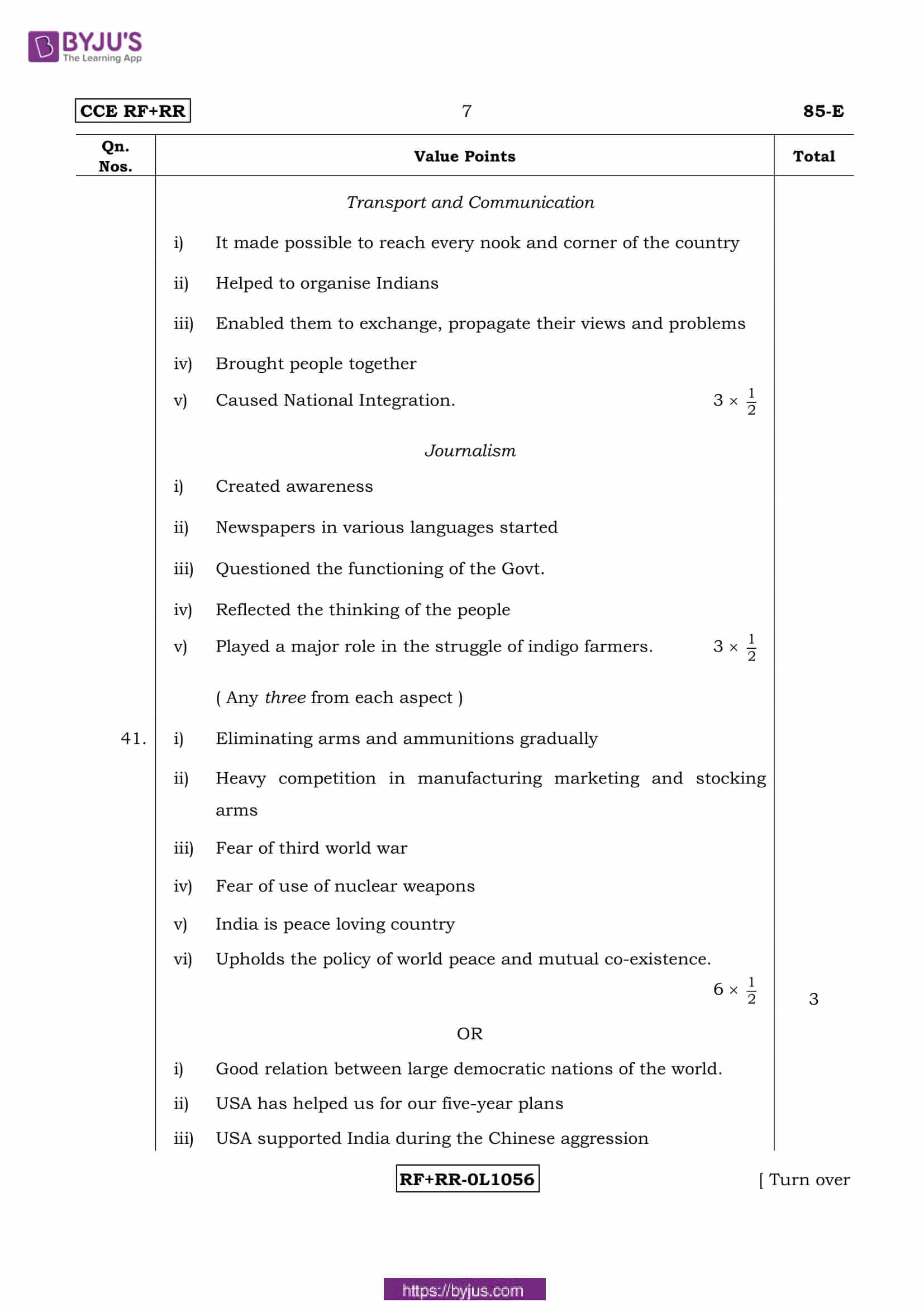 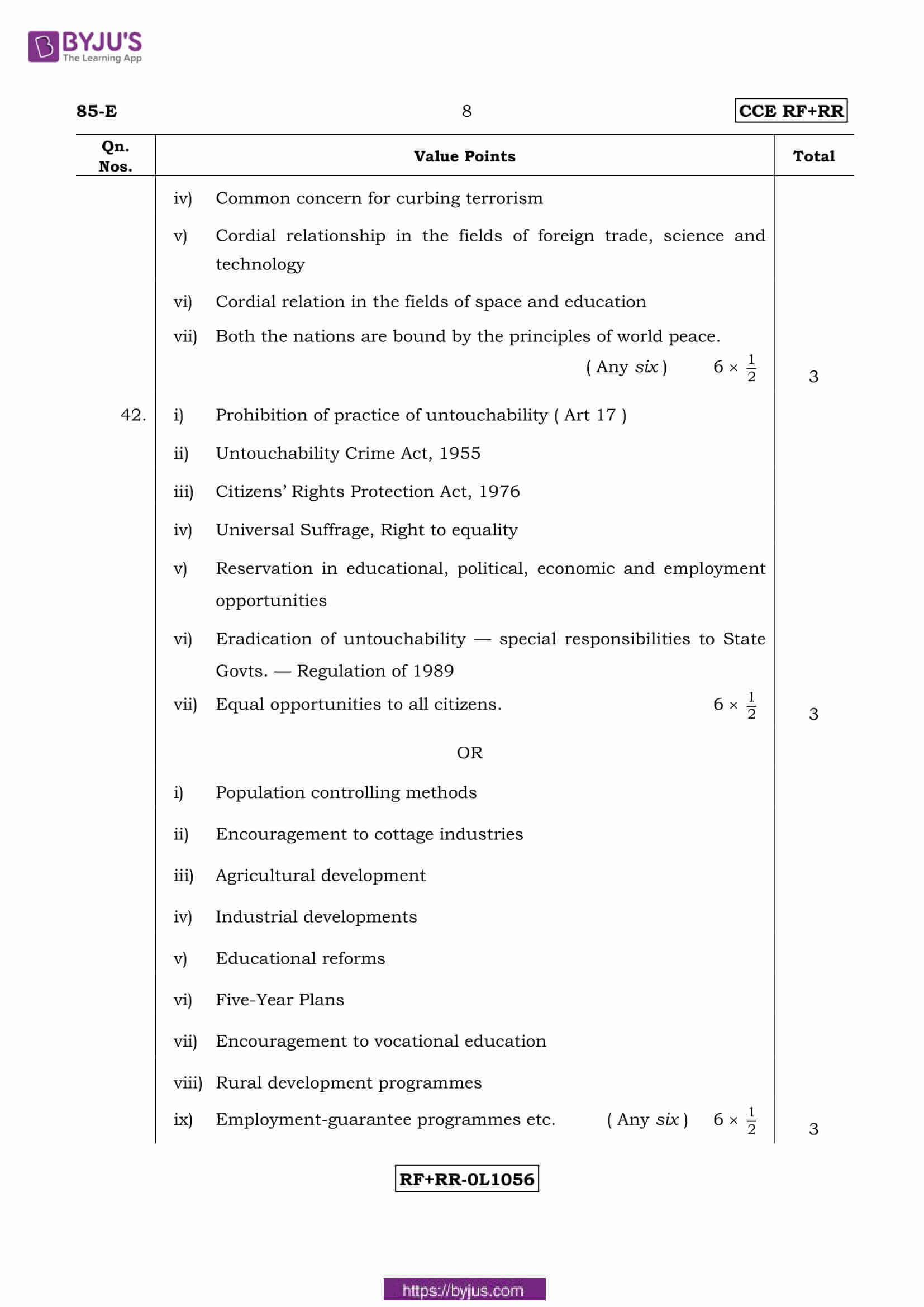 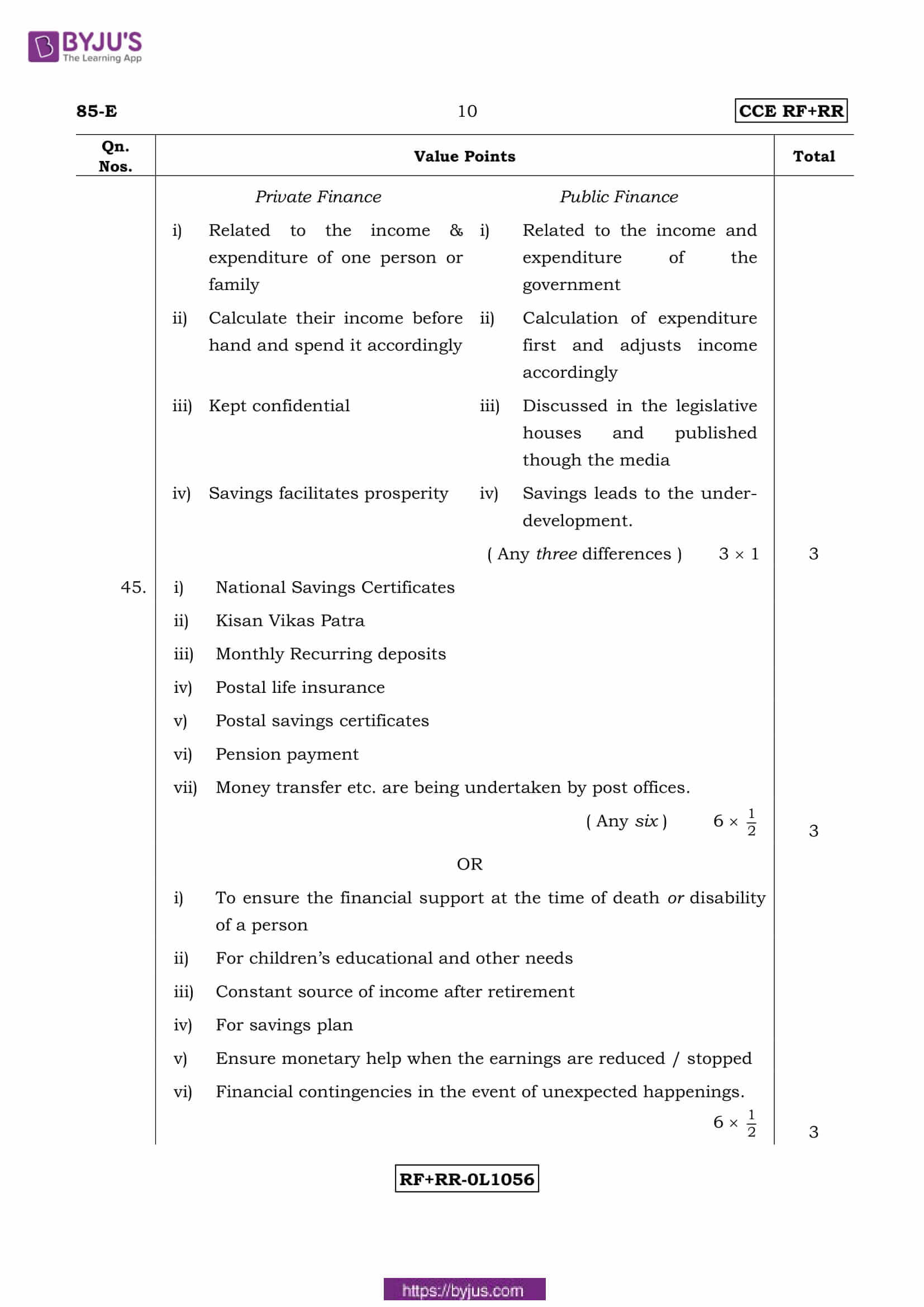 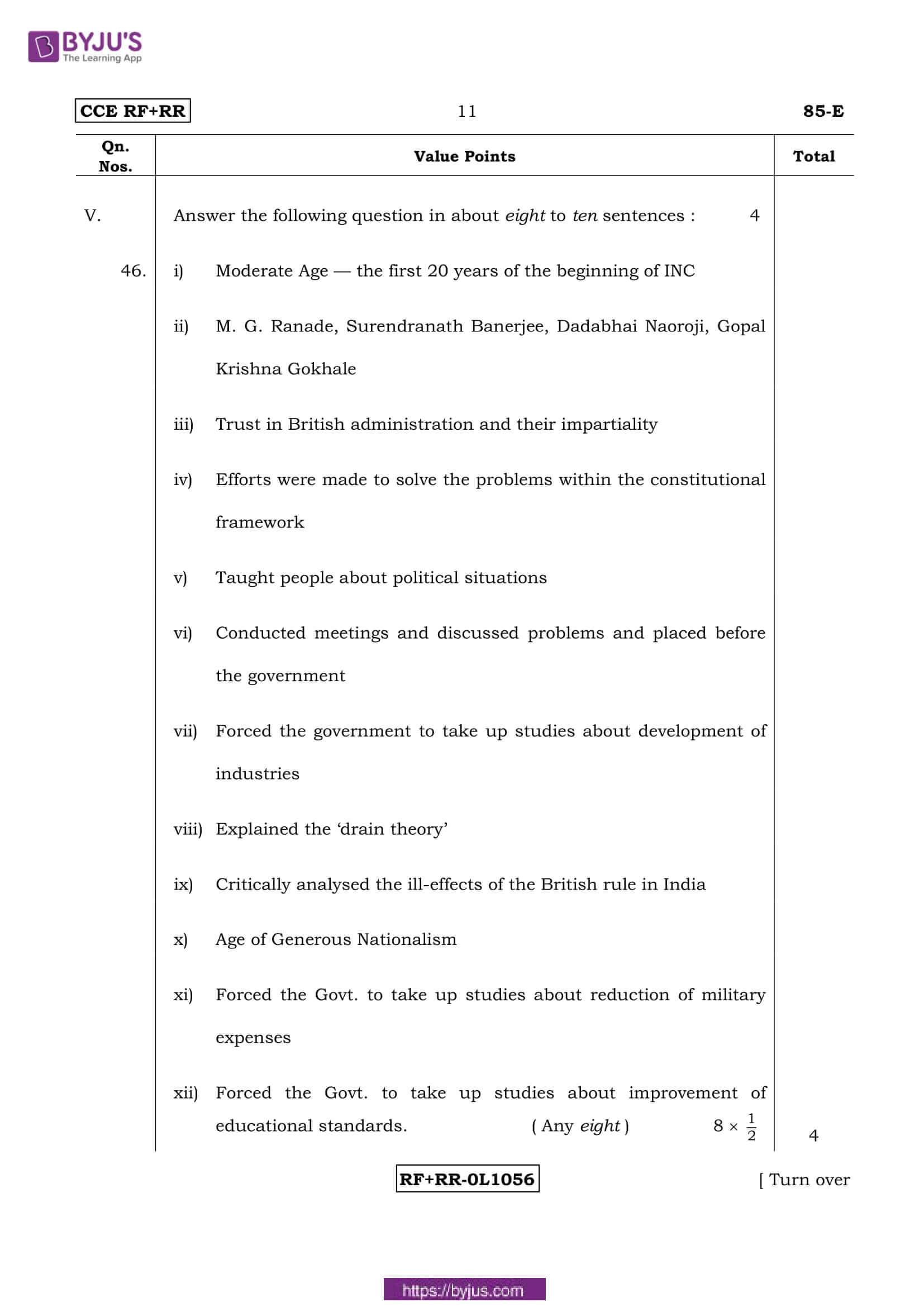 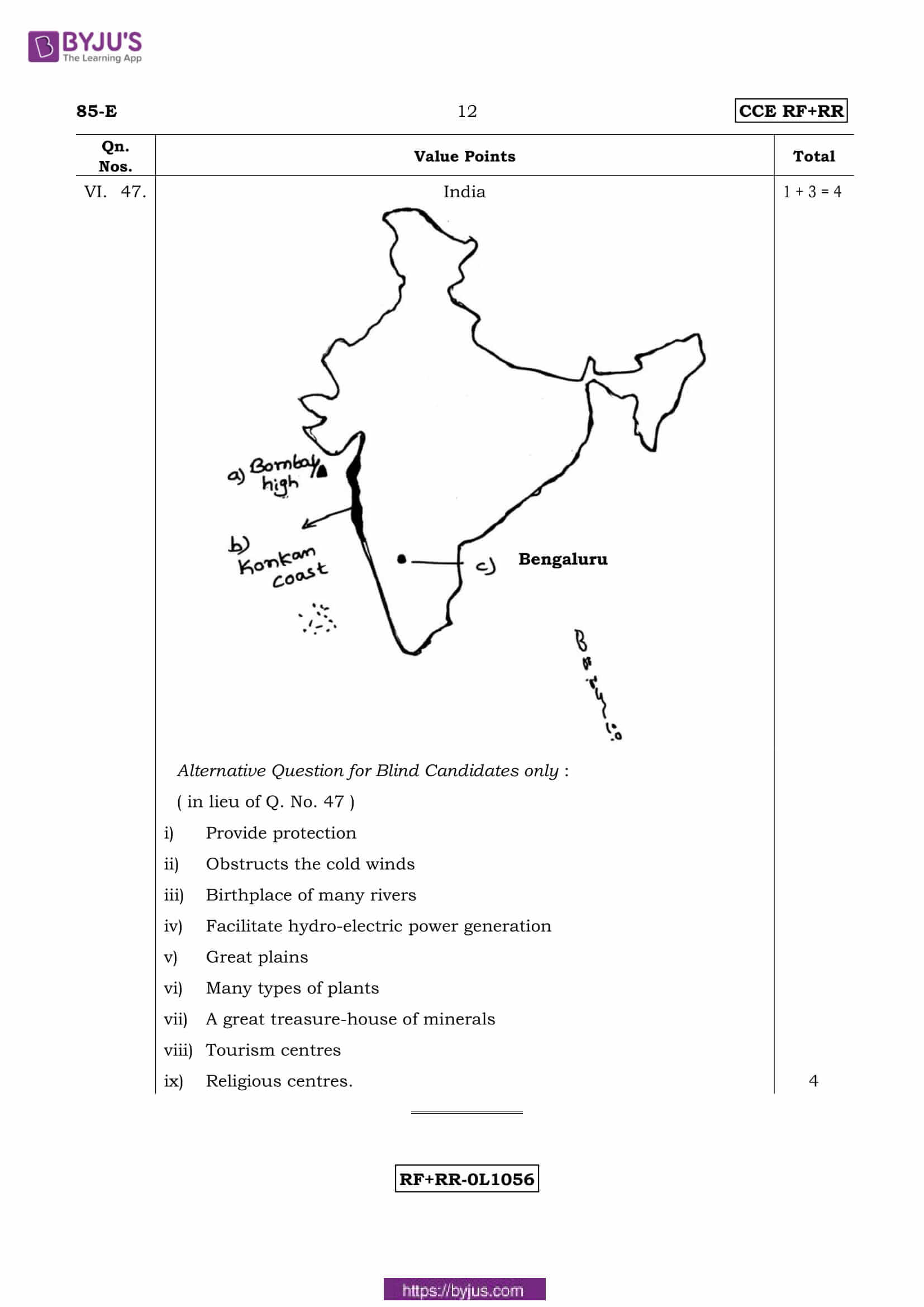 I. Four alternatives are given for each of the following questions / incomplete statements. Only one of them is correct or most appropriate. Choose the correct alternative and write the complete answer along with its letter of alphabet.

1. One of the main features of the Regulating Act is

(A) it led to the creation of a federal structure

(B) formation of religion based electoral constituencies

2. In Group-A list of leaders and in Group-B the role they played are given. Identify the group that matches.

3. The headquarters of UNO is located at

4. The League of Nations was established to maintain peace. But it failed as

(A) the United Nations Organisation was established

(D) the Cold War was started between USA and USSR.

5. ‘Truly, the whole mankind is one’ was declared by the Kannada poet

6. The exact matching of the marked places in the map is 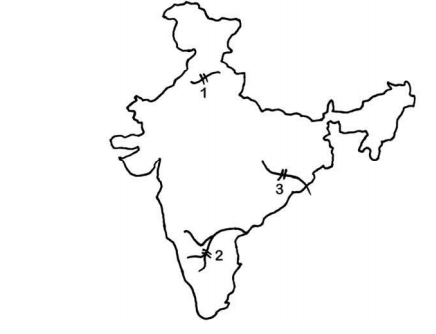 7. Export of Mica from India has reduced, because

(A) its production has decreased

(B) its production has increased

(C) substitute for mica is available

(D) it is a non-ferrous mineral.

8. ‘Father of Economic Planning’ of India is

9. Ramu wants to save money for his daughter’s marriage in future. The type of Bank account you suggest him to open is

10. Products of different countries are available in the markets of India, because of the process of

II. Answer the following questions in a sentence each:

12. Who was the first President of independent India?

13. Why is Sardar Vallabhbhai Patel called as the ‘Iron man of India’?

Answer: He brought about a successful integration of provinces.

16. When do Mob changes into Riot?

Answer: Mob changes into Riot when

17. Why was Chipko Movement launched?

18. The northern plains are called deposited plains. Why?

Answer: It is formed by the deposition of alluvial soil brought down by the rivers.

19. Why was river Damodar called ‘Sorrow of Bengal’?

Answer: It was causing large scale of destruction to life and property in West Bengal.

20. Coastal erosion is more severe along the West Coast of India. Why?

Answer: Because of high tides formed due to South West monsoons.

21. Why should mangrove forests be grown along the coast?

22. Dr. M. S. Swaminathan is called ‘The Pioneer of Green Revolution’. Why?

Answer: For implementing the improved technology in Indian agriculture.

24. Globalization keeps the costs of commodities down. How?

Answer: By the competition between local firms.

III. Answer the following questions in two to four sentences each:

25. Explain the system of Dual Government.

Answer: The system of Dual Government

26. Which are the areas of ‘Mumbai Karnataka’?

Answer: The areas of ‘Mumbai Karnataka’

27. Swami Vivekananda was a great inspiration to the youth. How?

28. Explain the effects of the Chinese revolution.

Explain the features of fascism.

Answer: The effects of the Chinese revolution are

Answer: The features of fascism are

29. How does population explosion lead to various problems?

Answer: Overpopulation leads to these problems.

30. Explain the effects of terrorism.

Answer: The effects of terrorism are:

32. “Indian agriculture is gambling with the monsoon winds.” Justify.

Answer: Indian agriculture is gambling with the monsoon winds

33. Why is it essential to prevent soil erosion?

Answer: Soil erosion leads to accumulation of silt that leads to infertility

34. Mention the characteristics of deciduous forests in India.

Answer: The characteristics of deciduous forests in India are

35. How does Remote sensing technology help in managing natural calamities?

Answer: Pictures taken with the help of remote sensing help in the study of natural calamities like typhoons, cyclones, stormsm, floods, droughts.

Answer: India has all the facilities needed for horticulture like

37. Mention the problems which arise due to human migration from villages to cities.

Answer: The problems which arise due to human migration from villages to cities are

38. It is not appropriate to measure the Nation’s development through National Income. Why?

Answer: It is not appropriate to measure the Nation’s development through National Income because

39. ‘Entrepreneurship is a creative activity.’ Why?

Answer: Entrepreneurship is a creative activity due to the following reasons:

IV. Answer the following questions in six sentences each:

40. “Various economic changes were responsible for the revolt of 1857.”Justify.

Development in Transport, Communication and Journalism led to the independence struggle of India. How?

41. Why is India championing the cause of Disarmament as very essential for the present day world?

The relationship between India and America is cordial. Justify.

Answer: India is championing the cause of Disarmament as very essential for the present day world

Answer: The relationship between India and America is cordial

42. Explain the constitutional and legal measures undertaken to eradicate untouchability.

Explain the measures undertaken by the Government to eradicate the problem of unemployment.

Answer: The constitutional and legal measures undertaken to eradicate untouchability are:

Answer: The measures undertaken by the Government to eradicate the problem of unemployment are:

43. Which are the major ports of India?

Which are the major industrial zones of India?

Answer: The major ports of India are:

Answer: The major industrial zones of India are:

44. Explain Gandhiji’s concept of ‘Grama Swarajya’ in the light of decentralization.

Mention the differences between Public finance and Private finance.

Answer: Gandhiji’s concept of ‘Grama Swarajya’ in the light of decentralization

Answer: The differences between Public finance and Private finance are:

Why is life insurance essential?

Answer: Life insurance is essential because

V. Answer the following question in about eight to ten sentences:

46. Explain the role of Moderates in the freedom struggle of India.

Answer: The role of Moderates in the freedom struggle of India are:

VI. 47. Draw an outline map of India and mark the following: 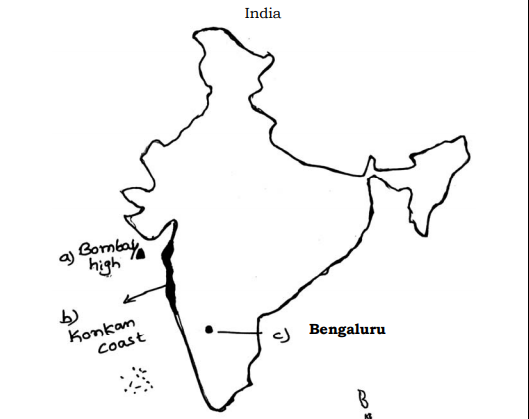