We all know that cells are the fundamental unit of life. The cell is the structural and building block of life. All living organisms in this universe are made up of cells. They are either unicellular or multicellular. This lesson mainly deals with the structure and cells present in both plants and animals. Here, we learn how a plant cell is entirely different from an animal cell.

We also learn about the cell structure, size, shape and organelles present in it. Each cell organelle has its own characteristic behavior and function. The whole biology of an animal or plant is determined by its cell. 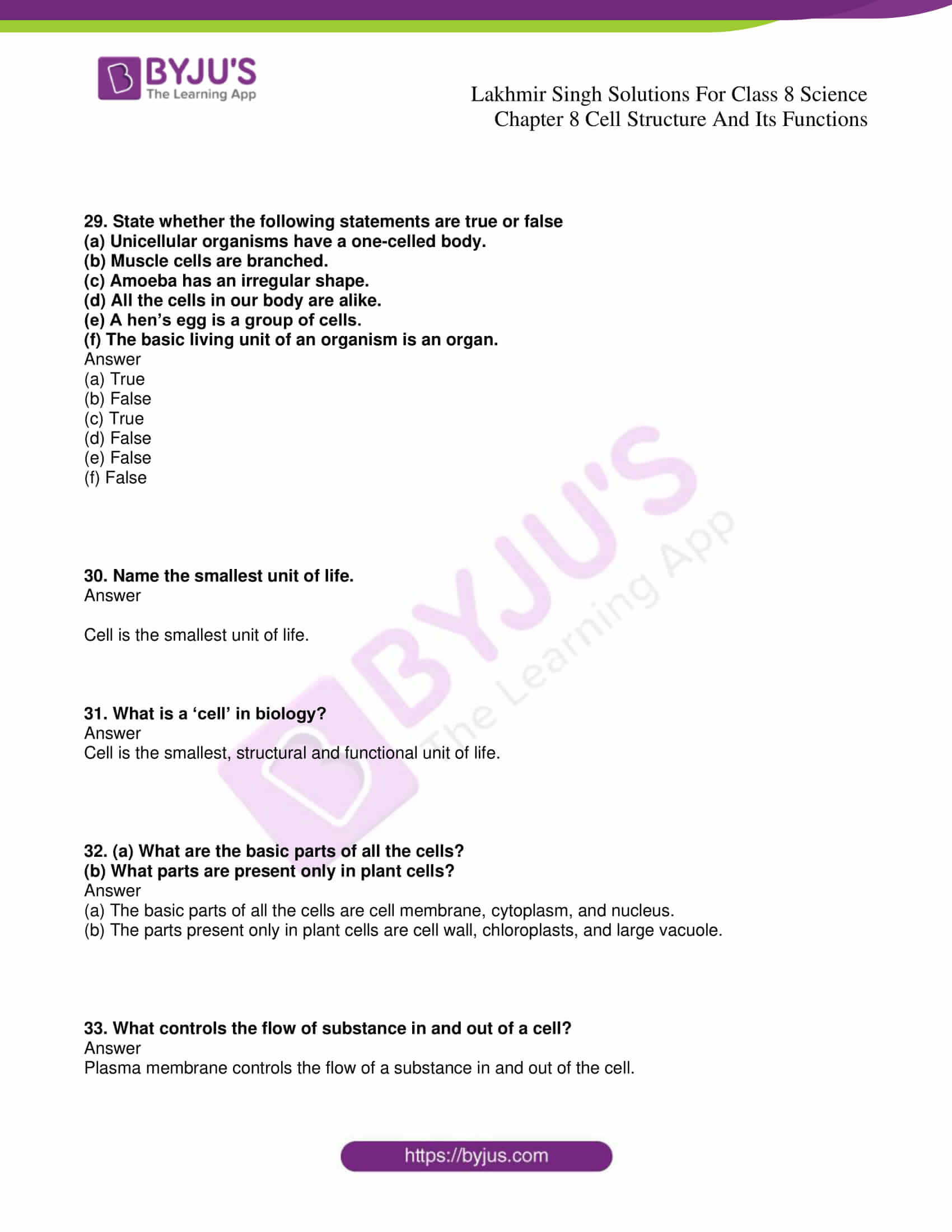 1. Which instrument was essential for the study of cells?

Microscope was the instrument was essential for the study of cells.

2. What is the basic similarity among all the living organisms (plants and animals)?

The basic similarity among all the living organisms (plants and animals) is that these are made up of cells.

3. Name the scientist who observed a thin slice of cork through a microscope and coined the term ‘cell’.

Robert Hooke in 1665 observed a thin slice of cork through a microscope and coined the team ‘cell’.

4. Name the outermost layer of an animal cell.

The outermost layer of an animal cell is the plasma membrane.

5. Which part of the cell contains organelles?

The part of the cell that contains organelles is cytoplasm.

6. Name any two organelles present in a cell.

Mitochondria and cytoplasm are the two organelles present in a cell.

7. Which part of a cell carries out respiration?

The part of a cell that carries out respiration is the mitochondria.

8. What are the units of inheritance in living organisms?

Genes are the units of inheritance in living organisms

9. Which is the largest floating body generally in the center of a cell?

The largest floating body generally in the center of a cell is the nucleus.

10. What is the function of the nucleus in a cell?

The function of the nucleus in a cell is to control the activities of the cell. It is called the master or director of the cell.

11. What do the chloroplasts contain?

12. What kind of cells are surrounded by a cell wall?

Cell walls are surrounded by the plant cells.

13. What sort of cells do not have a cell wall around them?

Animal cells do not have cell walls around them.

14. Name the layer which is outside the cell membrane of a plant cell.

The layer that is outside the cell membrane of a plant cell is called the cell wall.

15. How is the outside of a plant cell different from that of an animal cell?

The additional membrane called a cell wall outside the cell membrane around the plant cells makes it different from animal cells.

16. Name the organelle of a plant cell where photosynthesis takes place.

Photosynthesis takes place in chloroplasts organelle of the plant cell.

17. Which part of a plant cell protects outside of the cell?

The cell wall present in the outer layer protects outside of the cell.

18. Which part of the plant cell releases energy from food?

Mitochondria releases energy from food in the plant cell.

19. What causes the red color in tomatoes?

20. Which part of the two has a large vacuole: a plant cell or an animal cell?

The plant cell has a large vacuole.

21. Name any two parts which are present in a plant cell but not in an animal cell.

The cell wall and plastid are present in plant cells but not in animal cells.

22. Which cells transmit messages between the brain and other parts of the body?

The nerve cell transmits messages between the brain and other parts of the body.

23. Which cells in the human body can contract (and relax)?

The muscle cells in the human body can contract (and relax).

24. Name the spindle-shaped cells present in the human body.

The spindle-shaped cells present in the human body are called muscle cells.

The muscle cells are spindle in shape and are pointed at both the ends.

26. Name a single cell (other than Ameoba cell) which can change its shape.

White blood cells (WBC) present in our body can change its shape.

27. Name one ‘single-cell’ which behaves like a complete organism.

29. State whether the following statements are true or false

(a) Unicellular organisms have a one-celled body.

(b) Muscle cells are branched.

(c) Amoeba has an irregular shape.

(d) All the cells in our body are alike.

(f) The basic living unit of an organism is an organ.

30. Name the smallest unit of life.

Cell is the smallest unit of life.

Cell is the smallest, structural and functional unit of life.

(b) What parts are present only in plant cells?

(a) The basic parts of all the cells are cell membrane, cytoplasm, and nucleus.

(b) The parts present only in plant cells are cell wall, chloroplasts, and large vacuole.

33. What controls the flow of substance in and out of a cell?

Plasma membrane controls the flow of a substance in and out of the cell.

34. Which part of a cell controls all the activities of the cell?

The center of the cell, the nucleus controls all the activities of the cell.

35. Name the animal cell which is long and has thread-like branches.

The nerve cell is long and has thread-like branches.

36. What is the function of chloroplasts in a plant cell?

Chloroplasts help in the synthesis of food by the process of photosynthesis.

37. Name an organism that has no definite shape, and it keeps on changing its shape.

An organism that has no definite shape and it keeps on changing its shape is amoeba.

38. Name one cell in the human body which is spherical in shape.

The cell in the human body which is spherical in shape is the red blood cells (RBC).

39. Which organism has the smallest cell?

Bacteria mycoplasma has the smallest cell. Its size is around 0.1 micrometers.

42. Name two plant organ which is responsible for:

(b) absorption of water and minerals.

(a) Leaves are responsible for preparation of food by the process of photosynthesis.

(b) Roots help in the absorption of water and minerals from the soil.

Prokaryotic cells do not have a true nucleus.

45. Fill in the blanks with suitable words:

(a) Cells were first observed in cork by Robert Hooke in 1665.

(b) What is brick to a house is cells to an organism.

(c) The cytoplasm and nucleus make up the protoplasm.

(d) The shape and size of a cell is related to its function.

(f) The smallest unit of life is a cell.

(i) Cells make up tissues.

46. Why are plant and animal specimens usually stained with dyes before observing them through a microscope? Name one stain (or dye) used for this purpose.

The plant and animal specimens usually stained with dyes before observing them through a microscope because the various parts of the cell are colorless and are difficult to distinguish. Hence a wide variety of stains are used to identify the cells and its parts. Dilute iodine solution, methylene blue are some of the stains used for this purpose.

47. What is a tissue? Give two examples of tissues.

The tissues can be defined as a group of cells with similar shape and function are termed as tissues. They form a cellular organizational level intermediate between the cells and the organ system. Connective Tissue, Muscle Tissue, Nervous Tissue, Epithelial Tissue are the different types of tissues.

48. What is an organ? Give two examples of organs.

(a) Give two examples of organ systems in animals.

(b) Name the two main organ systems in plants.

A group of closely related organs that work together for a specific purpose for a particular organism is called an organ system.

(a) The digestive system and respiratory system are examples of organ systems in animals.

(b) The root system and the shoot system are the two main organ systems in plants.

50. Which of the following are plant organs and which are animal organs?