Algebraic identities for class 8, will teach you the standard identities list, we use to solve the mathematical expressions, which are based on these formulas and identities. Also, students of the 8th standard will learn to prove these identities using distributive law and multiplications techniques.

A variable is a term that can take any value. It can take any position in the number line, which has an infinite number of points. The value of algebraic expression changes with the changed value of the variable contained in it. The algebraic identities for class 8 also follow the same perception.

These are the general algebraic identities. If we put the values for a and b, in any of the above three expressions, the left-hand side of the equation will be equal to the right-hand side. Therefore, these expressions are called as identities.

As we already discussed algebraic identities, let us now discuss how to prove that these algebraic expressions are actually identities. These proofs will help you to solve many problems of algebraic questions for class 8 and class 9. 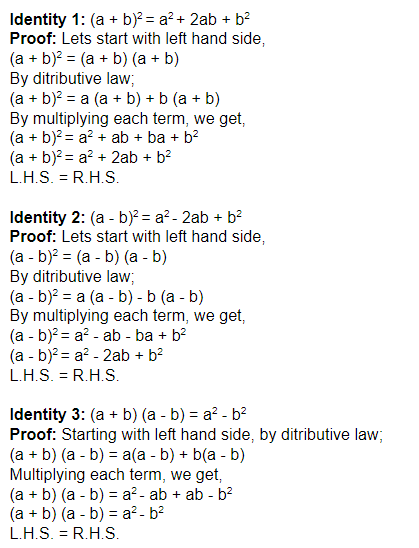 Hence, with this, all three identities are proved. Now let us solve some problems based on these identities.

Solution: By the algebraic identity number 3, we can write the given expression as;

Solution: We know, by algebraic identity number 1,we can write the given expression as;

Download BYJU’S – The Learning App and learn mathematical identities and formulas in an innovative and creative way.