The curves visit these asymptotes but never overtake them. The method opted to find the horizontal asymptote changes based on how the degrees of the polynomials in the numerator and denominator of the function are compared. If both the polynomials have the same degree, divide the coefficients of the largest degree terms.

There are three types of asymptotes namely:

The point to note is that the distance between the curve and the asymptote tends to be zero as it moves to infinity or -infinity.

When x moves to infinity or -infinity, the curve approaches some constant value b, and called as Horizontal Asymptote.

When x approaches some constant value c from left or right, the curve moves towards infinity, or -infinity and this is called Vertical Asymptote.

Please note that m is not zero since that is a Horizontal Asymptote.

We know that the vertical asymptote has a straight line equation is x = a for the graph function y = f(x), if it satisfies at least one the following conditions:

Otherwise, at least one of the one-sided limit at point x=a must be equal to infinity.

For Oblique asymptote of the graph function y=f(x) for the straight-line equation is y=kx+b for the limit \(x\rightarrow +\infty\) if and only if the following two limits are finite.

For horizontal asymptote, for the graph function y=f(x) where ,  the straight line equation is y=b, which is the asymptote of a function \(x\rightarrow +\infty\), if the following limit is finite.

The above limit is same for \(x\rightarrow -\infty\)

How to Find Horizontal Asymptotes?

To recall that an asymptote is a line that the graph of a function visits but never touches. In the following example, a Rational function consists of asymptotes. 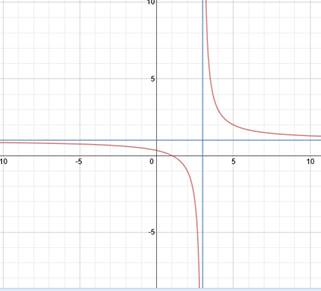 Let us see some examples to find horizontal asymptotes.

Since the highest degree here in both numerator and denominator is 1, therefore, we will consider here the coefficient of x.

Since we can see here the degree of the numerator is less than the denominator, therefore, horizontal asymptote is located at y = 0.

As you can see, the degree of the numerator is greater than that of the denominator. Hence, there is no horizontal asymptote.