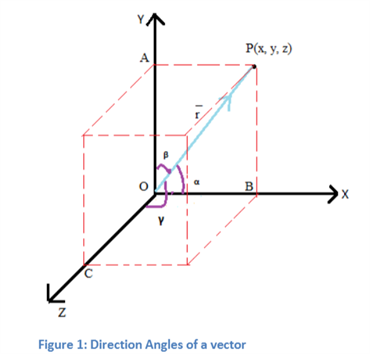 If we extend the line  OP on the three dimensional Cartesian coordinate system, then to figure out the direction cosines, we need to take the supplement of the direction angles. It is pretty obvious from this statement that on reversal of the  line  OP in opposite direction, the direction cosines of the line also get reversed. In a situation where the given line does not pass through the origin, a line parallel to the given line passing through the origin is drawn and in doing so, the angles remain same as the angles made by the original line. Hence, we get the same direction.

Since we are considering a line passing through the origin to figure out the direction angles and their cosines, we can consider the position vectors of the line OP.

Where r  denotes the magnitude of the vector and it is given by,

The cosines of direction angles are given by \(cos \alpha\), \(cos \beta\) and \(cos\gamma\) and these are denoted by l, m and n respectively. Therefore, the above equations can be reframed as:

We can also represent  r in terms of its unit vector components using the orthogonal system.

Substituting the values of x, y and z, we have

Therefore, we can say that cosines of direction angles of a vector r are the coefficients of the unit vectors \(\hat{i}\),\( \hat{j}\) and \(\hat{k}\) when the unit vector \(\hat{r}\) is resolved in terms of its rectangular components.

We can conclude that sum of the squares of the direction cosines of a line is 1.

From the above definition, we can say that

From these relations, we get

But we know that

The value of k can be chosen as positive or negative depending upon the direction of the directed line. 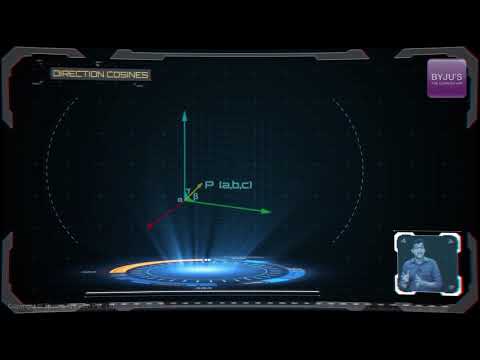 We are clear on the concept of the direction ratios and cosines of a line. To investigate more about three-dimensional geometry, download BYJU’S learning app and keep learning.