How to Find the Distance Between Two Points?

To find the distance between two points in the coordinate plane, follow the procedure given below:

Distance Between Two Points in 3D 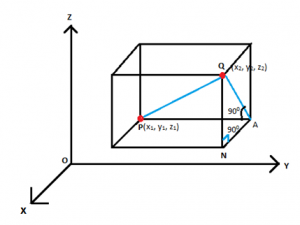 Through the points P and Q, we draw planes parallel to the rectangular coordinate plane such that we get a rectangular parallelepiped with PQ as the diagonal. ∠PAQ forms a right angle and therefore, using the Pythagoras theorem in triangle PAQ,

Also, in triangle ANQ, ∠ANQ is a right angle. Similarly, applying the Pythagoras theorem in ΔANQ we get,

From equations 1 and 2 we have,

As co-ordinates of the points, P and Q are known,

Thus, the formula to find the distance between two points in three-dimension is given by:

Let us go through some examples to understand the distance formula in three dimensions.

Using distance formula to find distance between the points P and Q,

Example 2: A, B, C are three points lying on the axes x,y and z respectively, and their distances from the origin are given as respectively; then find coordinates of the point which is equidistant from A, B, C and O.

Now, applying the distance formula for PO = PA, we get