The factors of 56 are the numbers, which produce the result as 56 when two numbers are multiplied together. Factor pairs of the number 56 are the whole numbers which could be either positive or negative but not a fraction or decimal number. Consider an example, the factor pair of 11 is written as (1,11) and (-1,-11). Thus, we can consider both positive and negative factor pairs of 11. To find the factors of a number, 56, we will use the factorization method. 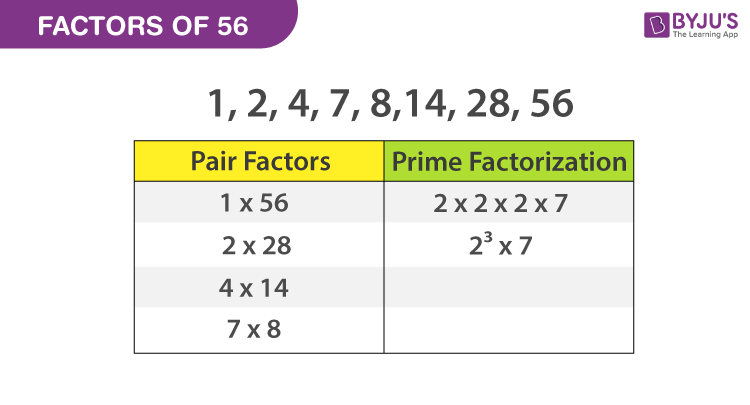 In the factorization method, first consider the numbers, 1 and 56 as factors and continue with finding the other pair of multiples of 56 which gives the results as an original number. To understand this method in a better way, read the article below to find the factors of a number 56 in pairs. Also, the prime factors of 56 with the help of the division method is discussed here

To find the pair factors, multiply the two numbers in a pair to get the original number as 56, such numbers are as follows

How to Find the Factors of 56?

Learn the following steps to find factors of a number 56.

The number 56 is a composite number and it has prime factors. Now let us know how to find the prime factors of a number.

Now, if we divide 7 by 2 we will get a fractional number, which cannot be a factor.

Learn more about factors and prime factors of other numbers by downloading BYJU’S – The Learning App for a better experience and clarification.

Test your knowledge on Factors of 56
Q5