A quadrilateral is a closed figure with four straight sides. The sum of all the interior angles of a quadrilateral is 360 degree. Quadrilaterals class 9 notes are provided here to help learners prepare for their examination in an easy and effective manner.

Q.1) Prove that the diagonals of a rhombus are perpendicular to each other.

Q.2) In the figure below, 2 parallel lines l and m are intersected by a transversal p. Prove that the quadrilateral formed by the bisectors of interior angles is a rectangle. 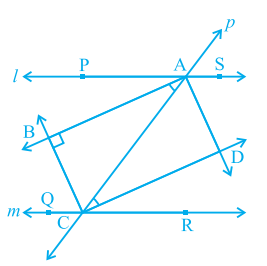 Q.3) Prove that the bisectors of the angles of a parallelogram form a rectangle.

Stay tuned with BYJU’S and get detailed notes of all concepts of Class 9 mathematics.