Let us see what topics we are going to cover here in this article.

What is a Rational Number?

How to identify rational numbers?

To identify if a number is rational or not, check the below conditions.

The set of rational numerals:

A number is rational if we can write it as a fraction, where both denominator and numerator are integers and the denominator is a non-zero number.

The below diagram helps us to understand more about the number sets.

The standard form of a rational number can be defined if it’s no common factors aside from one between the dividend and divisor and therefore the divisor is positive.

For example, 12/36 is a rational number. But it can be simplified as 1/3; common factors between the divisor and dividend is only one. So we can say that rational number ⅓ is in standard form.

Now, let’s discuss some of the examples of positive and negative rational numbers.

In Maths, arithmetic operations are the basic operations we perform on integers. Let us discuss here how we can perform these operations on rational numbers, say p/q and s/t.

Addition: When we add p/q and s/t, we need to make the denominator the same. Hence, we get (pt+qs)/qt.

Subtraction: Similarly, if we subtract p/q and s/t, then also, we need to make the denominator same, first, and then do the subtraction. 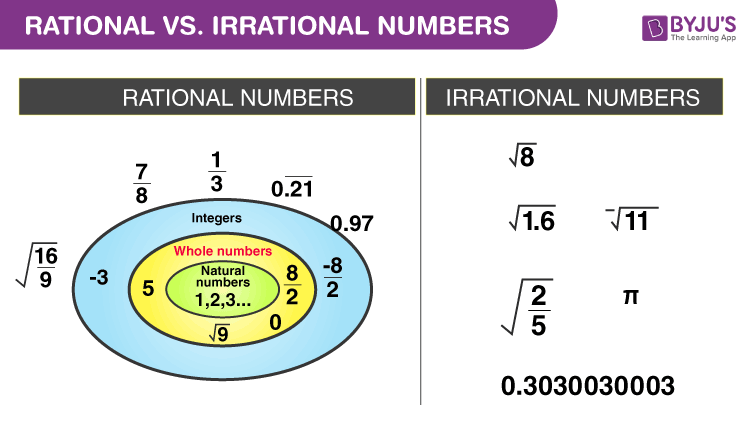 Rationals can be either positive, negative or zero. While specifying a negative rational number, the negative sign is either in front or with the numerator of the number, which is the standard mathematical notation. For example, we denote the negative of 5/2 as -5/2. 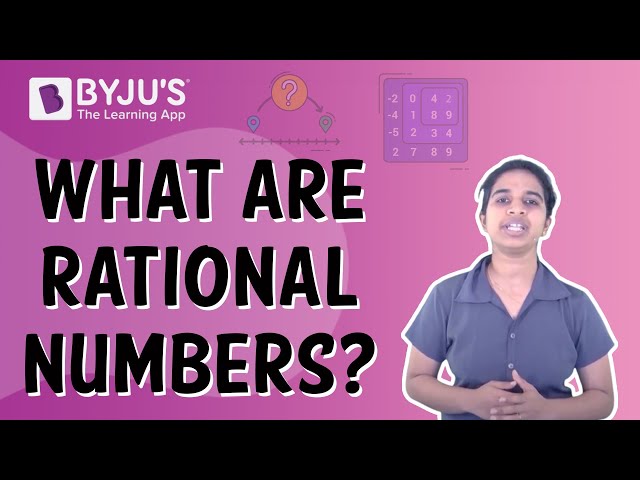 Identify whether a mixed fraction, 11/2 is a rational number.

Numerator = 3, which is an integer

Denominator = 2, is an integer and not equal to zero.

Determine whether the given numbers are rational or irrational.

The given numbers are in decimal format. To find whether the given number is decimal or not, we have to convert it into the fraction form (i.e., p/q)

If the denominator of the fraction is not equal to zero, then the number is rational, or else, it is irrational.

To solve more problems on Rational Numbers register with BYJU’S – The Learning App which provides detailed and step-by-step solutions to all Maths-related concepts. Also, take free tests to score well in your exams.

What are rational numbers? Give Examples.

What is the difference between rational and irrational numbers?

Is 0 a rational number?

Is 7 a rational number?

7 is a rational number because it can be written in the form of a ratio such as 7/1.

Find a rational number between 3 and 4.