MSBSHSE Solutions For SSC (Class 10) Science Part 1 Chapter 4 Effects of electric current is a crucial resource that helps students to master the key concepts from the chapter thoroughly. Students can solve these and prepare efficiently for the board exam. Maharashtra Board Solutions for Class 10, also helps to promote smooth understanding of the concepts that are being covered.

These solutions of MSBSHSE for Class 10 (SSC) with step-by-step explanations of the exercises given in the Maharashtra Board Science Textbooks for SSC Part 1 is also very easy to understand. The Maharashtra State Board Solutions for Chapter 4 Science Part 1 can be obtained by students. These solutions will help them if they want to revise all the key topics for the exam.

1. Tungsten metal is used to make a solenoid type, coil in an electric bulb. Give a scientific reason.

Answer: Equipments like electric bulbs make use of the heating effect of the electric current. Electrical conductors having higher resistivity are used here. Hence, Tungsten metal is used to make a solenoid type, coil in an electric bulb as it has high resistance and high melting point. The light bulb glows when high current is passed through it. Due to the current, this wire gets heated (to nearly 34000C) and emits light. The hot wire also radiates heat to a certain extent.

2. What is a solenoid? Draw a neat figure, naming various components and describe the magnetic field produced by a solenoid. 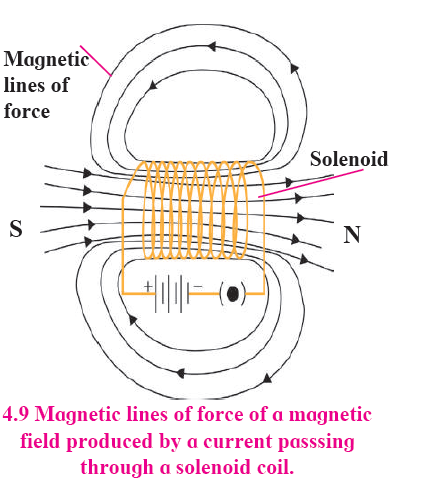 3. What is known as the heating effect of electric current?

4. A cell is connected to a 9 ohm resistance, because of which heat of 400 J is produced per second due to current flowing through it. Obtain the potential difference applied across the resistance.

Suppose the equation used is P= V2/R, replacing the values you get

Thus, potential difference applied across the resistance is 60V.

5. How did the Scientist Hans Christia Oersted come to the conclusion that there is a relation between electricity and magnetism?

Answer: Hans Christian Oersted established the significance of understanding ‘electromagnetism’. In 1820, he observed that on passing current through a metal wire, the magnetic needle near the wire turned through a certain angle. Hence, he identified the relation between electricity and magnetism. The unit of intensity of the magnetic field is termed as Oersted, in his honour.

6. What is the left-hand thumb rule?

7. Draw a figure about the working and the principle of an Electric Motor. 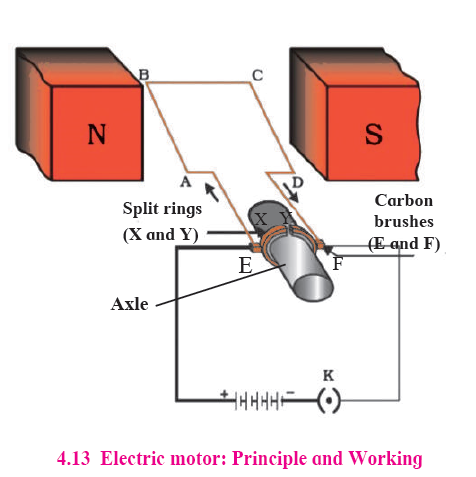 8. Write a note on the Galvanometer.

Answer: Galvanometer is a sensitive device that operates on the same principle as that of an electric motor. A coil is placed between the pole pieces of a magnet in such a way that the pointer on the galvanometer dial is connected to it. When a small current (for example 1 mA) flows through the coil, the coil rotates proportional to the current. Voltmeter and Ammeter also work on the same principle. In a galvanometer, the pointer deflects on both the sides of the zero mark depending on the direction of the current. Connect the galvanometer and keep the bar magnet erect in such a way that its north or south pole is just below the copper wire. Now if the wire is kept moving from A B, the pointer of the galvanometer gets deflected. This is called Faraday’s electromagnetic induction. Now move the magnet with the wire fixed and the Galvanometer pointer still gets deflected.

9. What is Faraday’s law of induction?

10. What will be required to make a DC generator?

Answer: The DC does not change the direction in the external circuit and this is achieved using a split ring fixed on the axle like a split ring used with an electric motor. This causes the branch of the coil going upwards to be always in contact with one brush and the branch going downwards to always be in contact with the other brush. Hence, the current flows in one direction in the external circuit. This is why this generator is called a DC generator.

Here, at BYJU’S, we also provide you with a complete list of Maharashtra HSC Board books PDF for students to download on their portable devices. Students are advised to access these and start preparing for the exams.