MSBSHSE Solutions For SSC (Class 10) Science Part 1 Chapter 5 Heat, a crucial resource helps students to master the key concepts of the chapter thoroughly. Students are advised to solve these and prepare efficiently for the board exam. Maharashtra Board Solutions for Class 10, helps to promote smooth understanding of the concepts covered under the subject.

This chapter mainly discusses the concepts of Heat such as Latent heat, Heating effects of electric current, Anomalous behaviour of water and more. In this chapter, students also learn about Specific heat capacity, Regelation, Dew point and humidity and so on.

These solutions of MSBSHSE for Class 10 (SSC) have step-by-step solutions with proper explanations for the exercises from the Maharashtra Board Science Textbooks for SSC Part 1 . The solutions are also very easy to understand. The Maharashtra State Board Solutions for Chapter 5 Science Part 1 can be obtained by students to revise all the key topics. 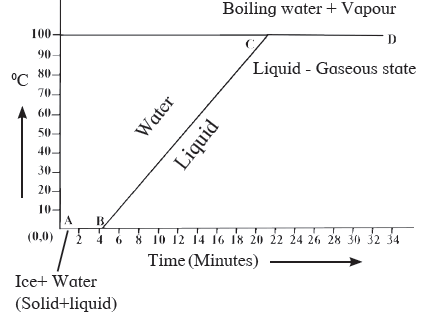 2. What is the role of anomalous behaviour of water in preserving aquatic life in regions of cold climate?

Answer: The anomalous behaviour of water is that from 0oC to 4oC it contracts and beyond 4oC it expands. So, the density of water is at the peak at 4oC. However, when the surrounding temperature goes down, the water in oceans and rivers also cools down and the temperature of whole water reaches 4oC. The water therefore reaches its maximum density at this temperature. Below this temperature (4oC), the water layer on the surface expands caused by anomalous behaviour of the water because of it’s decrease in density. Hence, this colder layer remains on top and converts into ice. This ice acts as an insulator and does not allow the temperature of the water layer below it to fall below 4oC. This ensures that a liveable temperature is maintained for aquatic life under the oceans and rivers.

Answer: The amount of heat needed to modify the state of unit mass of the body from solid to liquid or from liquid to gas without resulting in any change in temperature is called latent heat. When the latent heat is given off the body in liquid state, it will convert to solid state and the body in vapour state will transform to liquid state. This means the internal energy of the matter is reduced when latent heat is given off.

Answer: Regelation is the phenomenon in which the ice transforms to liquid because of applied pressure and then re-converts to ice once the pressure is removed.

6. What is relative humidity?

Answer: Relative humidity is the ratio of actual mass of vapor content in the air for a given volume and temperature to that required to make the air saturated with vapor at that temperature.

7. How much heat energy is necessary to raise the temperature of 5 kg of water

Therefore, the heat required to raise the temperature of water = 400 kcal

8. Explain the principle of heat exchange.

of the hot object goes on decreasing due to loss of energy. This change in temperature goes on till the temperatures of both the objects reach the same value. During this process, the cold object gains heat energy and the hot object loses heat energy. If the environment is separated from the system of both the objects by keeping it inside a heat resistant box (meaning that the energy exchange takes place between the two objects only), then no energy can flow from inside the box or come into the box. Principle applied here is Heat energy lost by the hot object = Heat energy gained by the cold object. This is called the ‘Principle of heat exchange.’

9. How will you determine whether air is saturated with vapour or not?

10. What are the melting and boiling points of:

Answer: The melting and boiling points of each are given below:

Students should passionately focus on the textbooks and practise all the questions and answers in order to secure high marks in the exams. They are recommended to go through all the topics thoroughly. The best resource that the students can find to prepare most effectively for the Maharashtra State Board exam is the MSBSHSE Solutions for SSC (Class 10) of various subjects listed here.