Q1. Choose the right option and rewrite the sentence.

(c) to stop the proliferation of nuclear weapons

Answer 1: This was the main objective behind establishing the Indian Atomic Energy Commission production of atomic energy

Answer 2: The following is now the objective of all the nations of the world economic development.

Answer 3: The Non-Alignment is an important aspect of India’s foreign policy.

Q2. Explain with reasons whether the following statements are true or false.

Answer 2: The statement is true. Atal Bihari Vajpayee took the lead in improving relations with Pakistan.

Answer 3: World Peace – World Peace means protecting the world from war, aggression and destruction. Since 1945, the United Nations and the five permanent members of its Security Council (China, France, Russia, the United Kingdom and the United States) have operated under the aim to resolve conflicts without war or declarations of war.

Q4. What is your opinion about the fact that world peace is threatened due to nuclear preparedness?

Answer: The world is in danger due to the modern nuclear race. It can be easily said that if the nuclear war starts now that will be the biggest war of the history of mankind. And there is a chance that most of the people of the world will suffer it directly or indirectly. Also, according to scientists, if all the nuclear weapons on earth are launched that will be the end of not only humans but plants and animals will also be destroyed completely.

(2) Who has contributed to improving Sino-Indian relations?

Answer 1: India’s Foreign Policy is based on five principles

Answer 3: The objectives of our foreign policy should be to maintain friendly relations with other nations and respect international law. 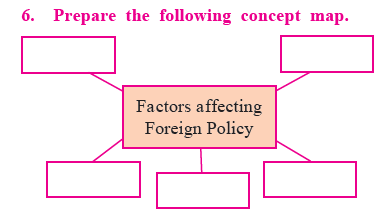 (1) Geographical Location: Some countries are far away from other countries, while there are several neighboring countries around some countries. Some nations have a long coastline, while some have plenty of mineral wealth. In sum, the size, population, topography, coastline, availability of natural resources, all these factors need to be considered while deciding the foreign policy of any country.

(2) Political System: In a democratic political system, the nation’s parliament plays a major role in evolving foreign policy. When different aspects come up for discussion in parliament, the opposition parties try to regulate the foreign policy by raising questions about the same.

(3) Economy: In modern times the economic condition of any country has acquired great importance in deciding foreign policy. As a result, the economy impacts foreign policy in two ways :

(1) Foreign policy is shaped by the need to establish economic relations with other countries, import-export, participation in world trade, all aimed at strengthening the economy of the country.

having a strong economy are less dependent on others and they can have an independent foreign policy as well.

People holding these positions try to maintain the continuity in foreign policy and to improve upon it. For example, Pandit Jawaharlal Nehru contributed to the policy of non-alignment to India’s foreign policy.

How useful are these Maharashtra Board Class 9 Social Science Solutions Political Science Chapter 2?

Yes, Maharashtra Board Solutions for Class 9 Social Science Political Science Chapter 2 India’s Foreign Policy are very useful. Students are also advised to solve these solutions after revising the chapter, as questions asked in the board exams could be based on these topics.

Yes, it is possible to download these solutions. Students can access the solutions from the link given in this article.

How can students use Maharashtra Board Class 9 Social Science Solutions Political Science Chapter 2 to prepare for exams?

These questions act as the perfect guide for Class 9 students during their board exam preparation, as it is crafted by qualified subject teachers as per the latest Class 9 Social Science Political Science Syllabus. Students can also find various solved questions and exercises that will aid them to prepare well for board exams. Students are advised to solve the questions and then to refer back to the solutions to get an idea on how to write the answers more effectively and in less time. This also helps them to gauge their performance or exam preparation level.