MSBSHSE Class 9 solutions of Social Science Political Science Chapter 6 are one of the best reference materials for students to clear their doubts. The solutions create a strong foundation in the minds of students so that they can face their exam confidently. Students can verify their answers and glance at the MSBSHSE Class 9 solutions of Political Science during revision before the exam. These solutions help students to get an idea on how to answer tricky and difficult questions.

Q1. Choose the right option and rewrite the sentence.

(1) Which among the following is an international problem ?

(a) Border dispute between Maharashtra and Karnataka

(2) Which among the following rights are not included in human rights ?

(a) Right to work

(b) Right to information

(3) Which among the following days is observed on an international level ?

Answer 2: (b) Right to information

Q2. Explain with reasons whether the following statements are true or false.

(1) It is necessary that all the nations should cooperate in order to find remedies on environmental degradation.

Answer 1: The statement is true. It is necessary that all the nations should cooperate in order to find remedies on environmental degradation like pollution, industrialization, etc.

Answer 2: The statement is false. Sino-Indian relations are not friendly. They have border conflicts regarding Aksai Chin area and Macmohan line.

(2) Degradation of the Environment

Answer 2: Degradation of the Environment – Industrialisation on a large scale and the increasing need for energy has endangered the environment. Chemical fertilisers and pesticides used in agriculture, sound pollution due to vehicles, radiation from nuclear reactors, oil leakages or leakages of chemical gases make the environment unsafe and create various problems.

Answer 3: Terrorism – Terrorism is spreading fear and terror in a society by using or threatening to use violence against common and innocent people for achieving political goals. Terrorism is organised and planned violence. Terrorism has made a deep and long term impact on international politics.

Answer 4: Refugee Crisis – People who have to leave their motherland against their wishes or are forced to go to other nations, seeking refuge or for security are called refugees. People become refugees due to torture or persecution for belonging to a particular race or religion, due to war or a disaster, etc. 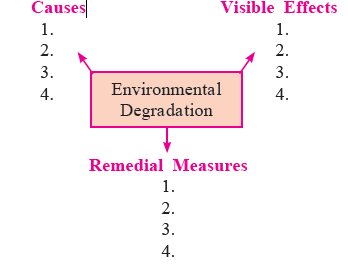 Q5. Write your own opinion about:

(2) Narrate the effects of terrorism and suggest remedies to control it.

Answer 2: Terrorism has made a deep and long term impact on international politics. In the last two decades, terrorist conflict appears to have intensified in different countries. In the case of terrorism, terrorist groups can cause violence in any part of the world from anywhere in the world. The aim of a terrorist attack is not to endanger the geographical boundaries, but to challenge a regime in a country or refuse to acknowledge the existence of the State. This means that due to increasing terrorism, the internal security of a country is threatened in addition to its external security. In order to curb terrorism, it is imperative that the security mechanisms of different nations should work in a concerted manner.