Q1 Identify the precipitation type with the help of the description given:

(a) It is the main source of the water that you use. Sometimes it is torrential and sometimes continuous. Most of the agriculture in India is dependent on it.

(b) It seems as if water droplets are floating in the atmosphere. In London, one cannot see the Sun till the afternoon during winters because of this phenomenon.

(c) It never precipitates like this in equatorial areas. Precipitation in the solid form sometimes causes damage to the crops.

(d) A white cotton like layer spreads on the earth’s surface. Because of this form of precipitation, the State of Jammu and Kashmir has to change its capital in winters. In Maharashtra, it does not

Q2 Look at the following pictures and identify the correct rainfall type. 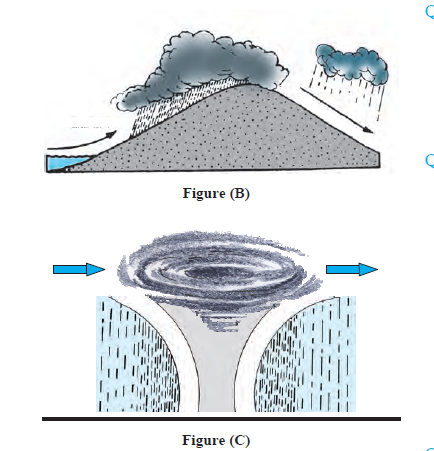 Q 3. Look at the figures above and answer the following questions:

(1) In figure B, on which side of the mountain is it raining more?

(2) Shade the rain shadow region in figure B and name it.

(3) What is the difference between A and C?

(4) Stormy winds and floods are associated with which rainfall type?

(5) What type of rainfall occurs in Singapore?

Answer 1: From the given figure it is understood that it is raining more on the right side of the mountain.

Answer 4: Cyclonic rainfall are associated with Stormy winds and floods.

Q 4. Identify the odd man out:

Answer 1: Convectional rainfall is the odd man out.

(1) In what ways does precipitation occur on the earth?

(2) Comment on the rainfall occurring in the rain shadow area.

(3) Which type of rainfall occurs in most of the world? Why?

(4) If condensation occurs closer to the earth’s surface, what types of forms become visible?

(5) What precautions should be taken while measuring rainfall?

Answer 1: Precipitation is any type of water that forms in the Earth’s atmosphere and then drops onto the surface of the Earth. When a portion of the atmosphere becomes saturated with water vapor, it condenses and precipitates. Most common forms of precipitation are rain, snow, drizzle, hail, etc.

Answer 2: A rain shadow is a dry area on the leeward side of a mountainous area. The mountains block the passage of rain-producing weather systems and cast a shadow of dryness behind them. The air, without much moisture left, advances across the mountains creating a drier side called the rain shadow.

Answer 3: Orographic rainfall occurs in most of the world:

Answer 4: The types of forms that become visible are:

Answer 5: The following precautions should be taken while measuring the rainfall.

Answer 1: Difference between dew and frost are:

Answer 2: Difference between snow and hail are: