MSBSHSE SSC (Class 10) Social Science Political Science Chapter 2 is considered as one of the best books that provides complete information of each and every concept. It helps students to face all kinds of questions, irrespective of their toughness. The students are advised to thoroughly go through MSBSHSE SSC solutions of Political Science Chapter 2 before the final exams. By doing so students can fetch more marks in their upcoming exam.

Q1. Choose the correct option from the given options and complete the sentences.

(2) ………… was appointed as the first Chief Election Commissioner of independent India.

(3) Constituencies are created by ………. committee of the Election Commission.

Answer 1: The Election Commissioner is appointed by the President.

Answer 3: Constituencies are created by Delimitation committee of the Election Commission

Q2. State whether the following statements are true or false. Give reasons for your answer.

(1) The Elections Commission lays down the code of conduct during elections.

(2) Under special circumstances the Election Commission holds re-elections in a particular constituency for a second time.

(3) The state government decides as to when and in how many stages the elections would be held in a particular State.

Answer 1: The statement is true. Election commission of India lay down the code of conduct during election to ensure fair selection of the respective leader by the people of the area without any force, thereby ensuring democracy.

Answer 2: The statement is true. When there is any problem during the poll, there are any problems, which hurt the normal process of election, then the election commission can call for a re-election.

Answer 3: The statement is false. The Election Commission of India decides as to when and in how many stages elections would be held in a particular state which largely depends on the population density.

(2) Journey from the ballot box to EVM machine

Answer 2: Journey from the ballot box to EVM machine – The first election in independent India was held in 1951-52. This was the beginning of shaping democracy through electoral politics. In the initial elections ballot boxes were used for the purpose of voting. The use of EVM machines started from the decade of 1990s. Many things could be achieved because of the voting machine. If the voters do not want to vote for any candidate, they could choose an option of ‘None of the above’ (NOTA). This option can be given only because of the voting machine. It has become easy for disabled people (Divyanga) to vote. It reduced the cutting of trees for paper and thereby helped in the protection of the environment. It has also been possible to have an early declaration of election results. 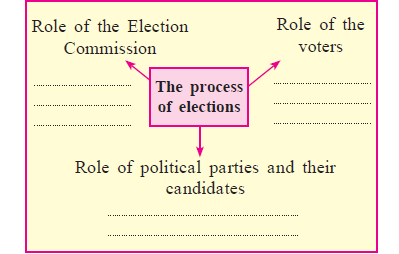 Answer: Role of Election Commission: To conduct free and fair elections in the country.

Role of the voters: To cast their votes and participate in the election process

Role of political parties & their candidates: To follow the Code of Conduct.

(1) Explain the functions of the Election Commission.

(2) Write some additional information about post of the Election Commissioner.

(3) Explain the meaning of Code of Conduct.

Answer 1: The functions of the Election Commission are as follows:

How useful are these Maharashtra Board Class 10 Social Science Solutions Political Science Chapter 2?

Yes, these solutions are very useful. Students are advised to practise solving these solutions after revising the chapter, as questions asked in the board exams could be based on these topics.

Yes, it is possible to download these solutions. Students can access the solutions from the link given in this article.

How can students use Maharashtra Board Class 10 Social Science Solutions Political Science Chapter 2 to prepare for exams?

These questions act as the perfect guide for Class 10 students during their board exam preparation, as it is crafted by qualified subject teachers as per the latest class 10 Social Science Political Science Syllabus. Students can also find various solved questions and exercises that will aid them to prepare well for board exams. Students are advised to solve the questions and then to refer back to the solutions to get an idea on how to write the answers more effectively and in less time. This also helps them to gauge their performance or exam preparation level.