MSBSHSE (Maharashtra board) Class 10 Science Part II 2018 Question Paper with solutions can be seen in the PDF format online, at BYJU’S. If any of the students are wondering how to crack the Science exams of Class 10 MSBSHSE, they can just download and practise this solved Question paper. We have provided downloadable links in this article, from where students can download the question paper. Science, being a challenging subject to ace, students will have to conquer all the concepts related to the subject. The best way to ace the subject, is to solve QPs and practise. 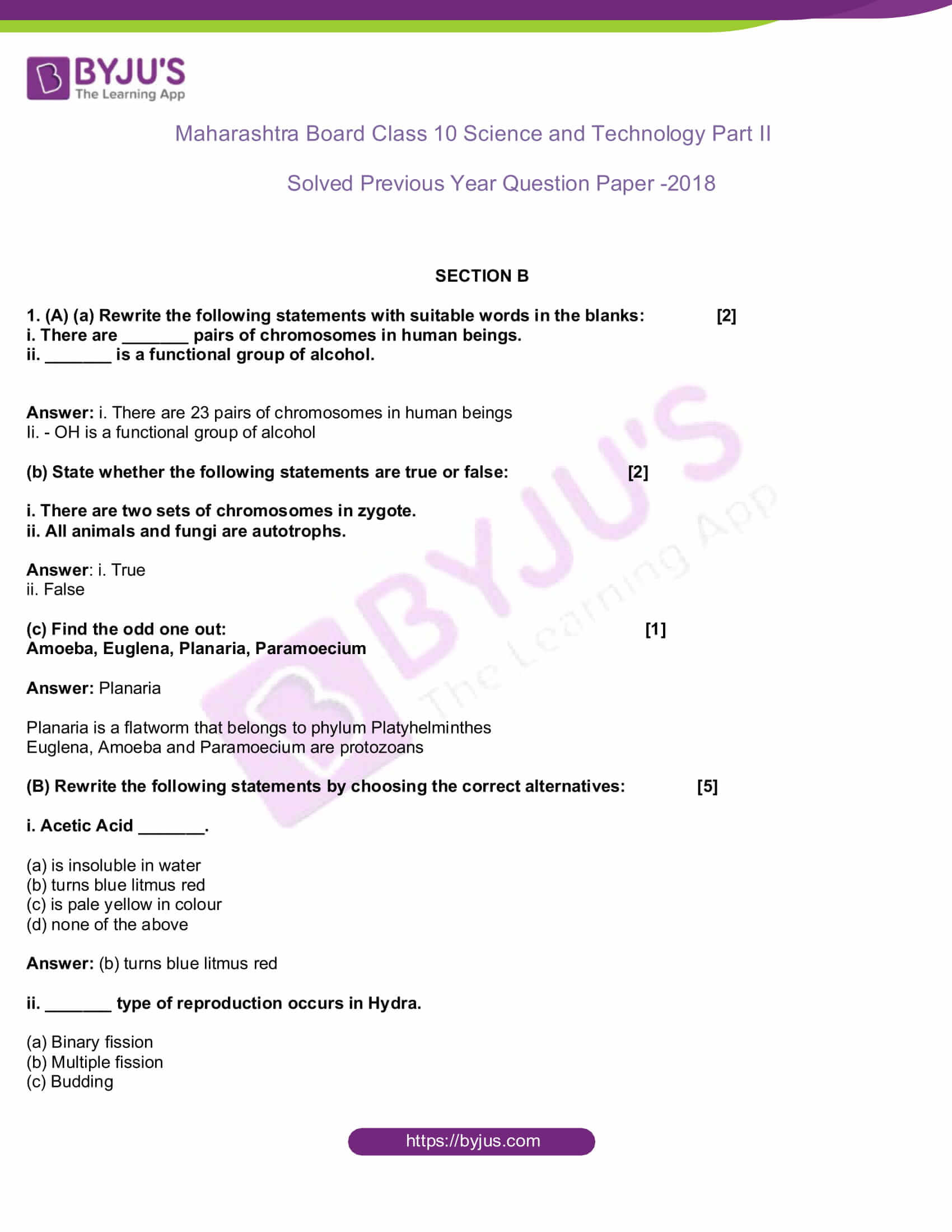 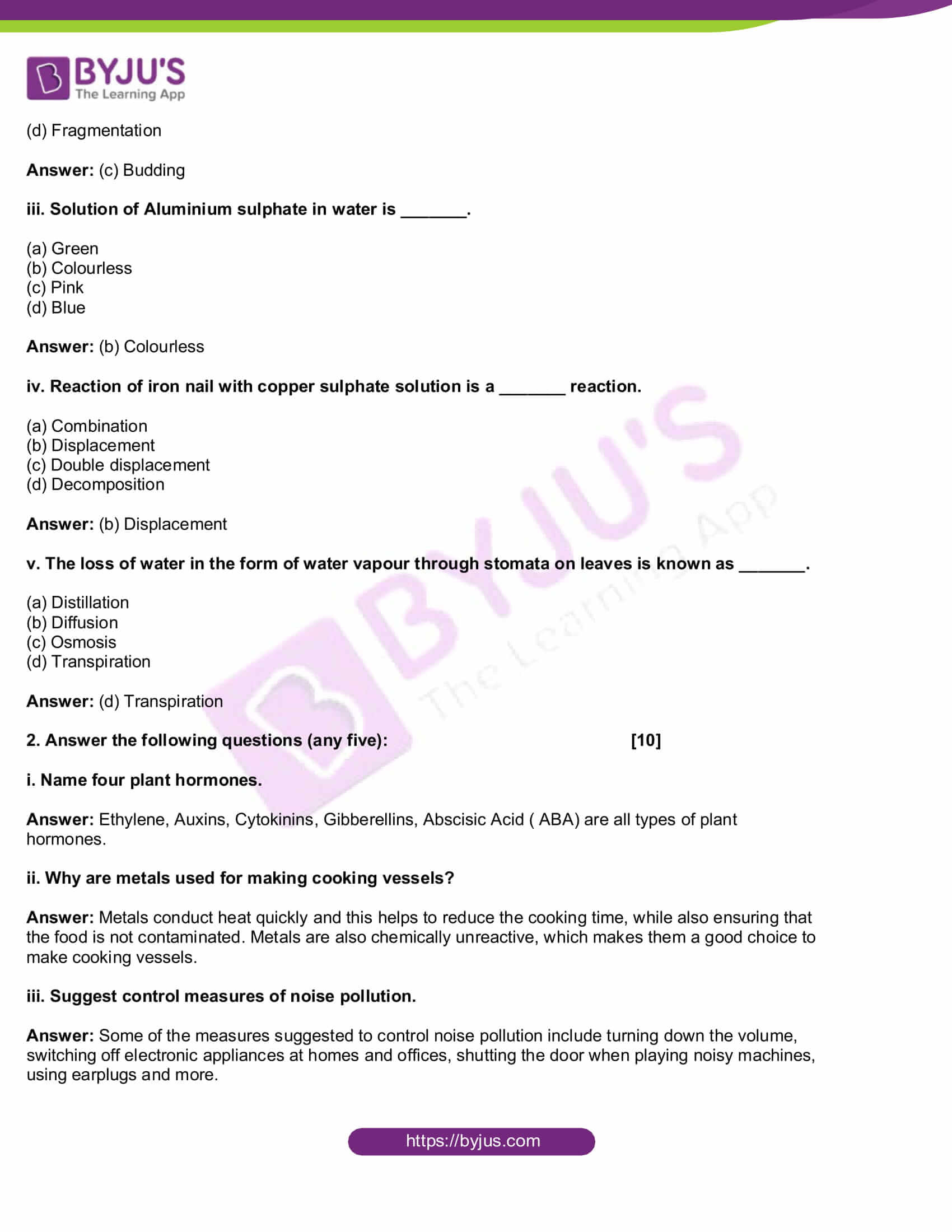 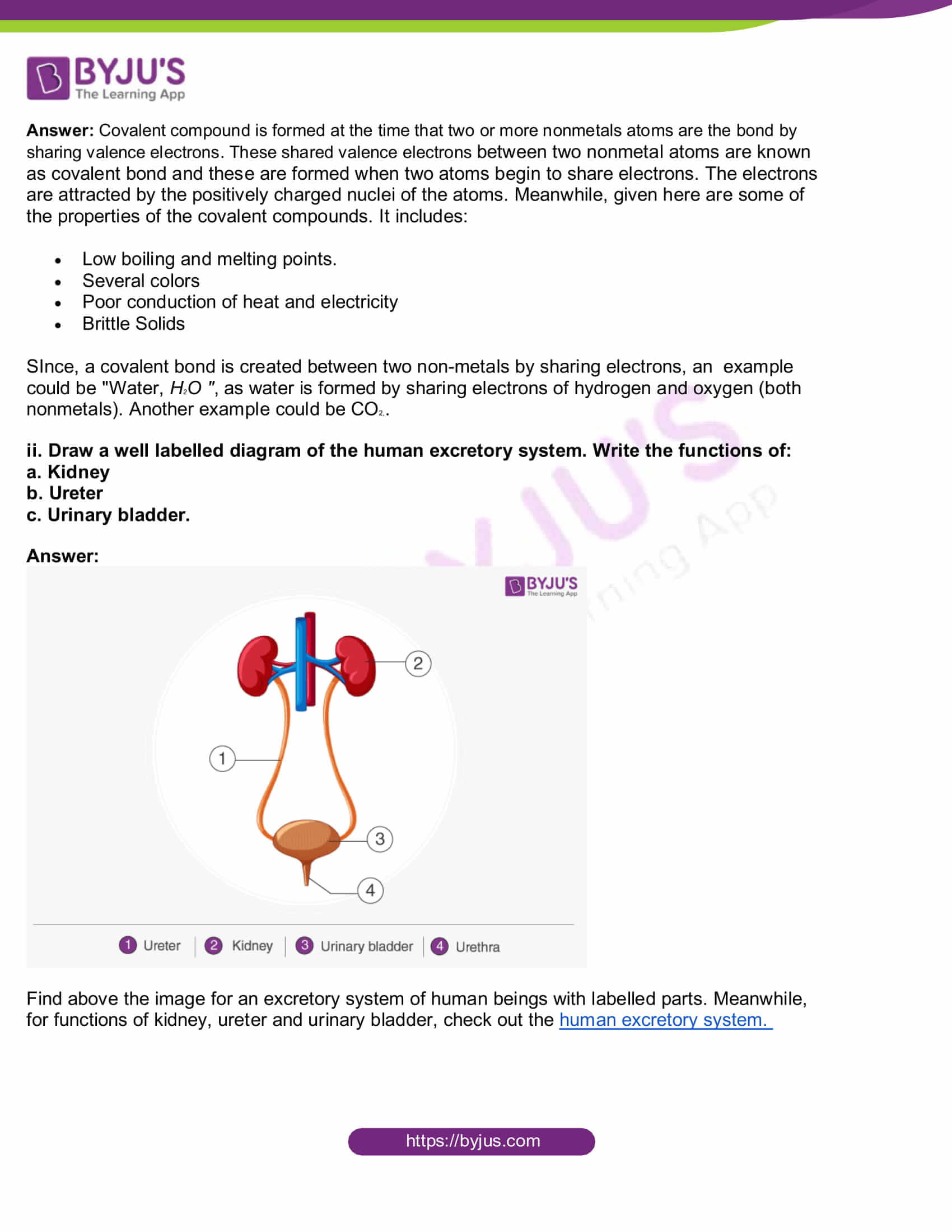 1. (A) (a) Rewrite the following statements with suitable words in the blanks: [2]

Answer: i. There are 23 pairs of chromosomes in human beings

Ii. – OH is a functional group of alcohol

(b) State whether the following statements are true or false: [2]

i. There are two sets of chromosomes in zygote.

ii. All animals and fungi are autotrophs.

Planaria is a flatworm that belongs to phylum Platyhelminthes

Euglena, Amoeba and Paramoecium are protozoans

(B) Rewrite the following statements by choosing the correct alternatives: [5]

(a) is insoluble in water

(c) is pale yellow in colour

(d) none of the above

iv. Reaction of iron nail with copper sulphate solution is a _______ reaction.

v. The loss of water in the form of water vapour through stomata on leaves is known as _______.

ii. Why are metals used for making cooking vessels?

Answer: Metals conduct heat quickly and this helps to reduce the cooking time, while also ensuring that the food is not contaminated. Metals are also chemically unreactive, which makes them a good choice to make cooking vessels.

Answer: Some of the measures suggested to control noise pollution include turning down the volume, switching off electronic appliances at homes and offices, shutting the door when playing noisy machines, using earplugs and more.

iv. What are alloys? Give two examples.

Answer: A homogeneous mixture of two or more metals or metals and non-metals in definite proportions are known as alloys. Take the example of brass, which is an alloy of copper and zinc. Another example is stainless steel, an alloy of nickel and chromium.

i. Population explosion is the root cause for depletion of natural resources. Explain.

Answer: There are two types of natural resources present in nature. They are:

1. Renewable resources such as Sun, Wind, Water and so on

Answer: Vestigial organs are remains of the structure that was functional in the past in some ancestors but is no longer functional in organisms, having lost its function during evolution. Some of these vestigial structures indicate some relationships with other mammals including primates. Human tailbone also called coccyx is the remnant of a tail existing in our ancestors, which was also used to balance their body. It was also used for locomotion, even as humans started to walk using their legs. However, these organs turned to be useless during the process of evolution.

iii. What is anodising? Give its applications.

Answer: An electrolytic process used to increase the thickness of natural oxide layer on the surface of metal parts, anodising helps to increase corrosion and wear, thus giving better adhesion for paint primers and glues than bare metal. This process is called anodising for the reason that the part to be treated forms the anode electrode of an electric circuit. This is what helps to prevent the metal from corrosion. This is also used for architectural finishing.

iv. Write the changes that occur in the age group 11 to 21 years in boys.

Answer: These are the changes that occur in the age group 11 to 21 years for boys:

v. Name different types of neurons and give one function of each

Answer: Neurons are of three kinds, sensory neuron, motor neuron and association neuron, all three with different functions. However, the brain has to effectively communicate this to the rest of the body and vice versa.

Sensory neurons are in charge of changing external stimuli from the environment to the corresponding internal stimuli, activated by sensory input. They send out projections to other elements of the nervous system, thus conveying or carrying sensory information to the brain or the spinal cord. However, unlike the motor neurons of the central nervous system (CNS), whose inputs are from other neurons, sensory neurons are activated by physical modalities including visible sound, heat, light, physical contact or via chemical signals like smell, taste and so on.

Meanwhile, motor neurons located in the central nervous system project their axons outside of the CNS to directly or indirectly control muscles. Alternatively, the association or interneurons (also called mixed neurons) are neither sensory nor motor and rather act like the middleman connecting these two types of neurons. Located in the central nervous system, they function only locally, meaning their axons connect only with nearby sensory or motor neurons. Interneurons can save time and prevent injury as well by sending out a message to the spinal cord and back instead all the way to the brain.

vi. How is sex determined in human beings?

Answer: Human diploid cell consists of 23 pairs (46) of chromosomes, out of which 22 pairs are autosomes and one pair is the sex chromosomes. These are the X and Y chromosomes. Every child or human being gets one set of chromosomes from each parent. Human male, thus will have 44 + XY chromosome, while the human female will have the 44 + XX chromosome. So, females can be said to be homogametic while males are heterogametic. However, during gamete formation, meiosis or reduction process occurs, so that the gamete gets only one set of chromosomes and so it is haploid. Here, the female gamete (ovum) will be 22 + XX, while the male gamete (sperm) is 22+ XX or 22 + XY. Then, when the male and female gametes unite forming a zygote, the chromosomes again become diploid. This is how the offspring gets the same number of chromosomes as its parents. The sex of the baby, in the meantime is determined by the nature of the sperm (X or Y) that fertilzes the ovum. Hence, for human beings the sex of a baby is determined by the father.

4. Answer any one of the following questions: [5]

i. What are covalent compounds? Write any three features and give two examples.

Answer: Covalent compound is formed at the time that two or more nonmetals atoms are the bond by sharing valence electrons. These shared valence electrons between two nonmetal atoms are known as covalent bond and these are formed when two atoms begin to share electrons. The electrons are attracted by the positively charged nuclei of the atoms. Meanwhile, given here are some of the properties of the covalent compounds. It includes:

ii. Draw a well labelled diagram of the human excretory system. Write the functions of: 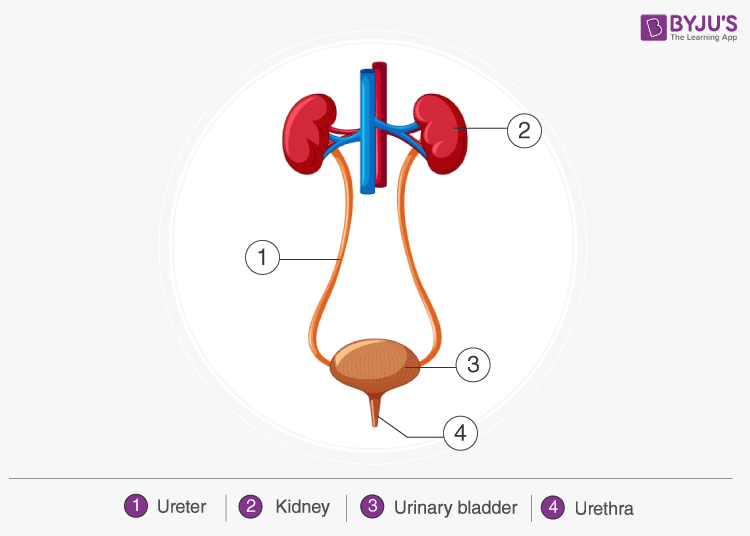