NCERT Exemplar Class 11 Physics Chapter 13 Kinetic Theory provides answers to the Exemplar questions provided in the NCERT Exemplar book. Extra questions provided here are prepared by experts at BYJU’S which will assist you in the preparation of CBSE Class 11 and entrance exams like NEET, JEE, JEE advance, AIEEE. This NCERT exemplar class 11 physics Chapter 13 pdf has MCQ’S, Match the following, fill in the blanks and true or false type of questions together with numerical problems, important derivations, worksheets, exercises and HOTS. The kinetic theory is a theory which applies to different particles such as atoms and molecules. Kinetic theory is usually applied to the properties of gases. The Brownian motion gives a pretty good visualization of the flow of particles and the collisions that may occur. 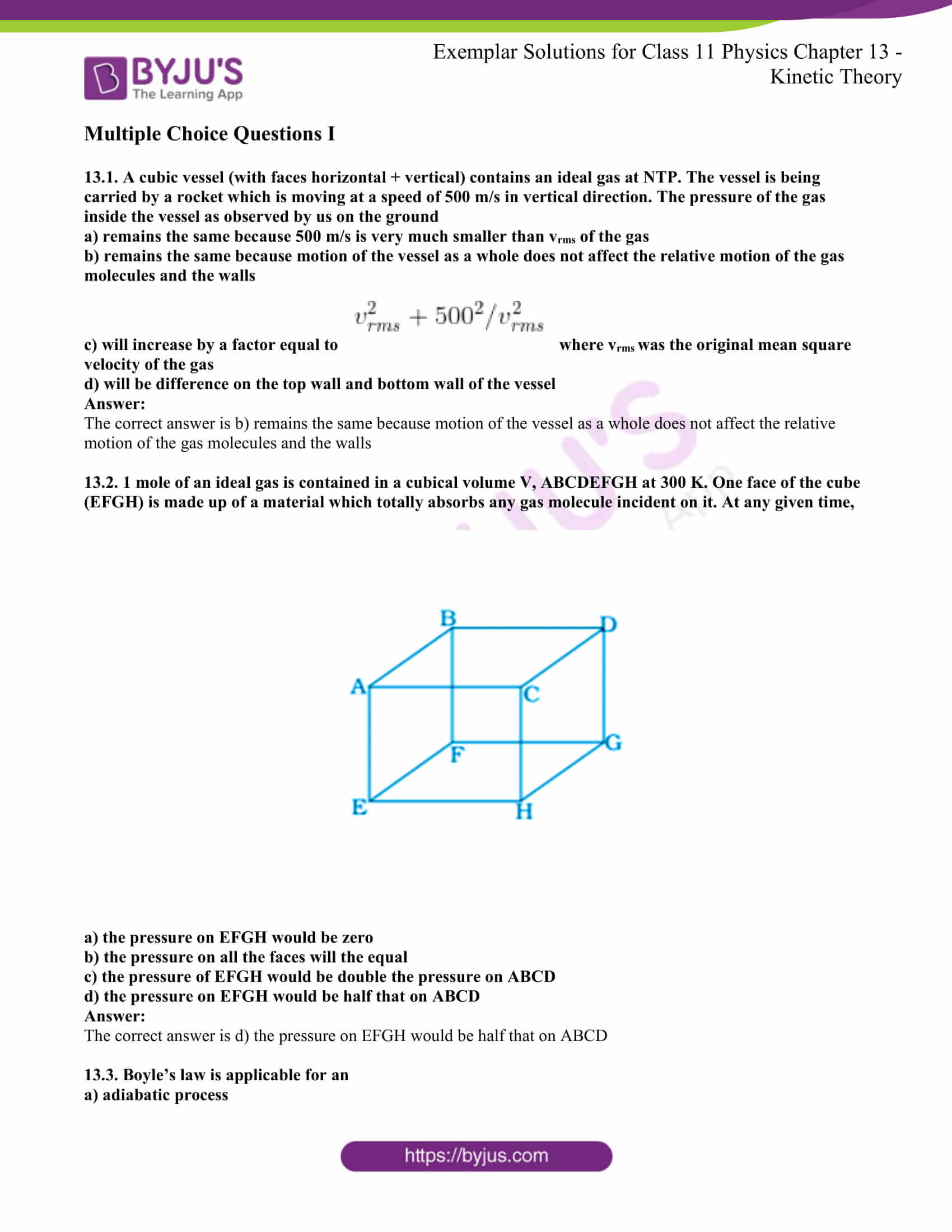 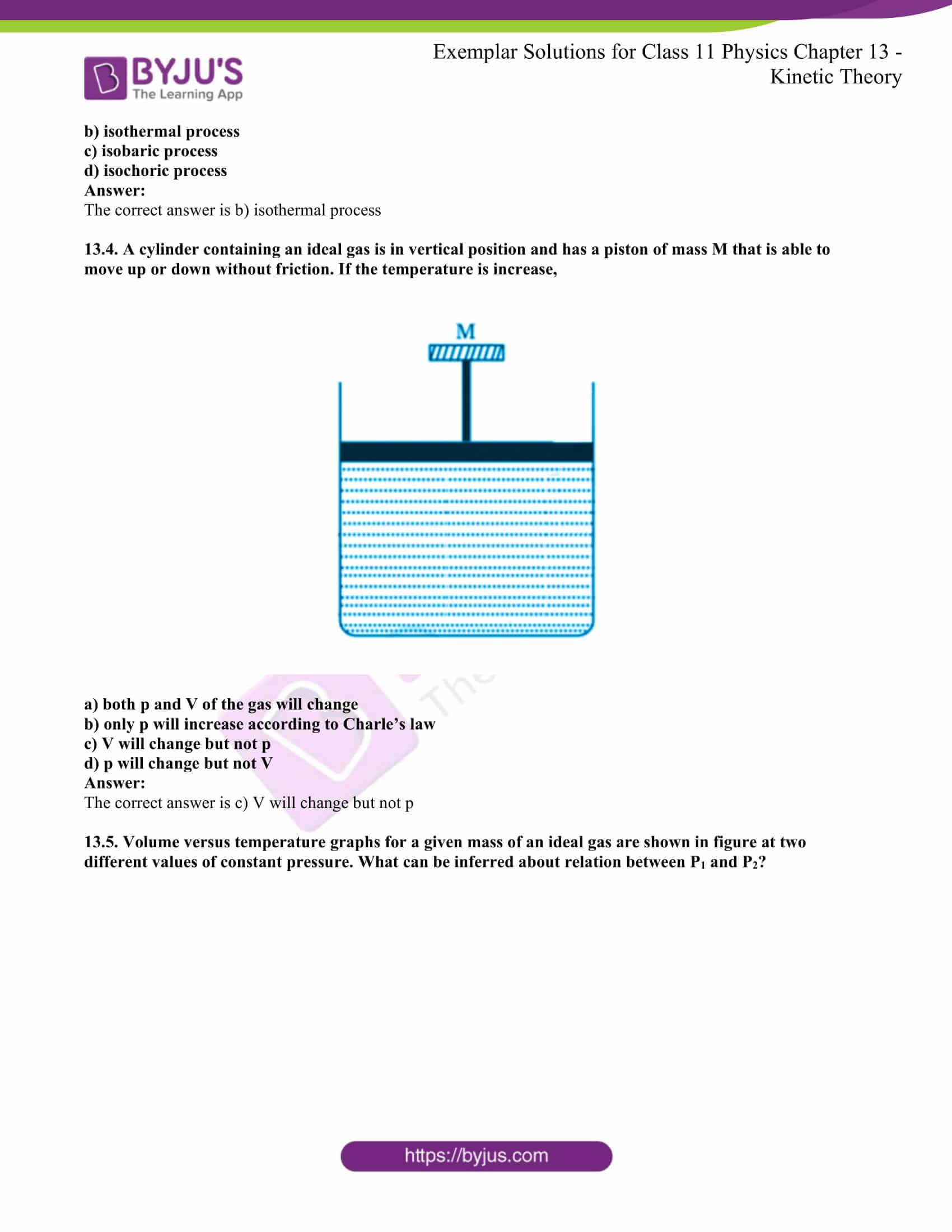 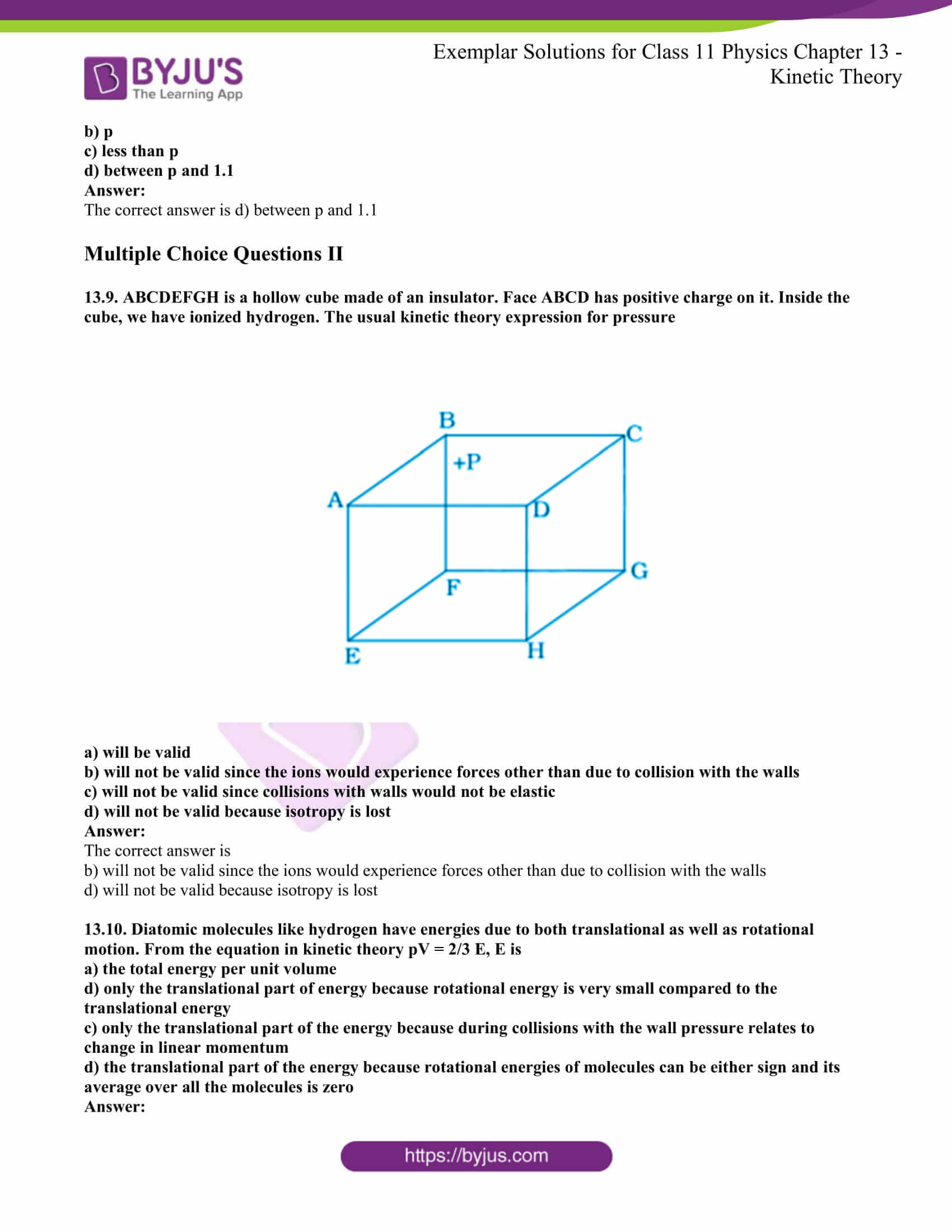 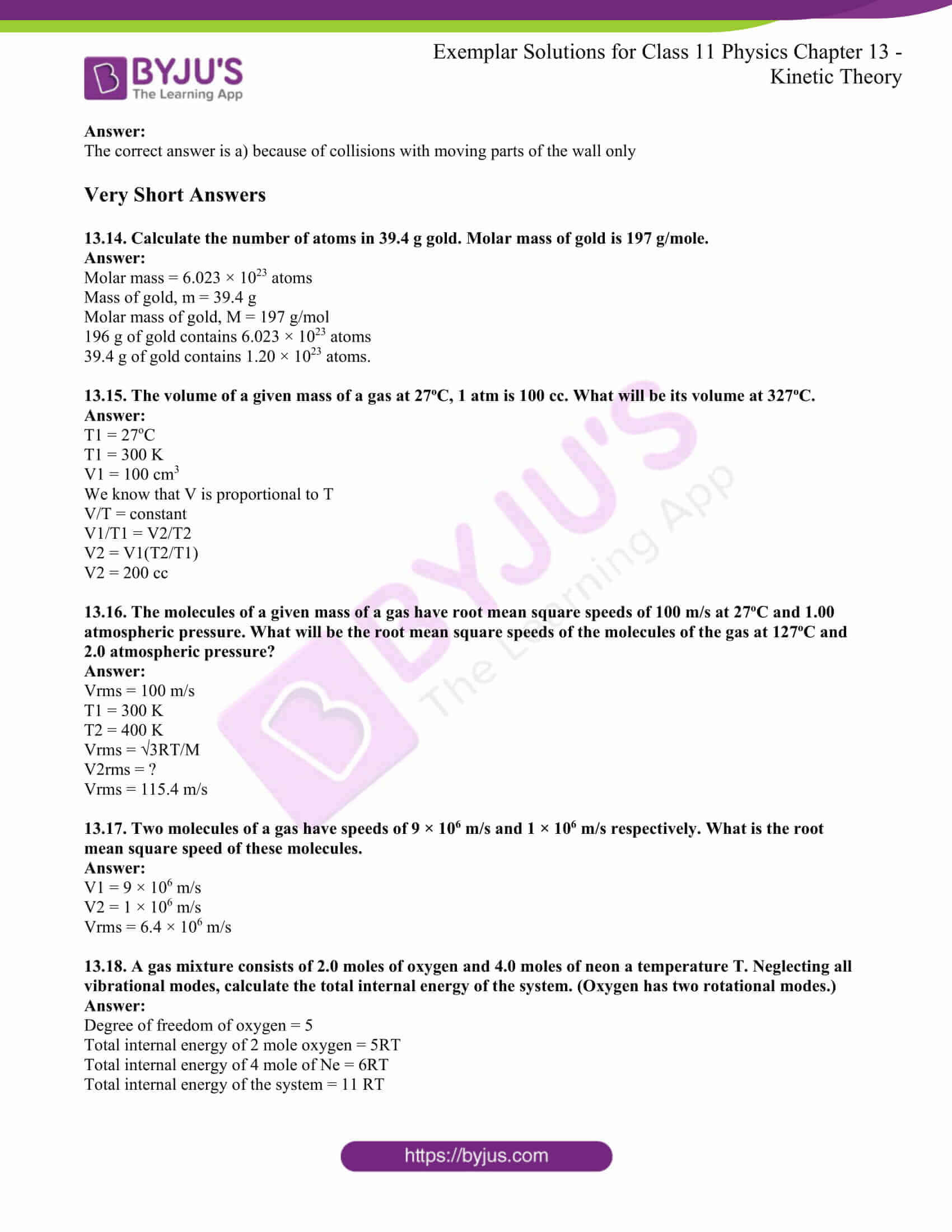 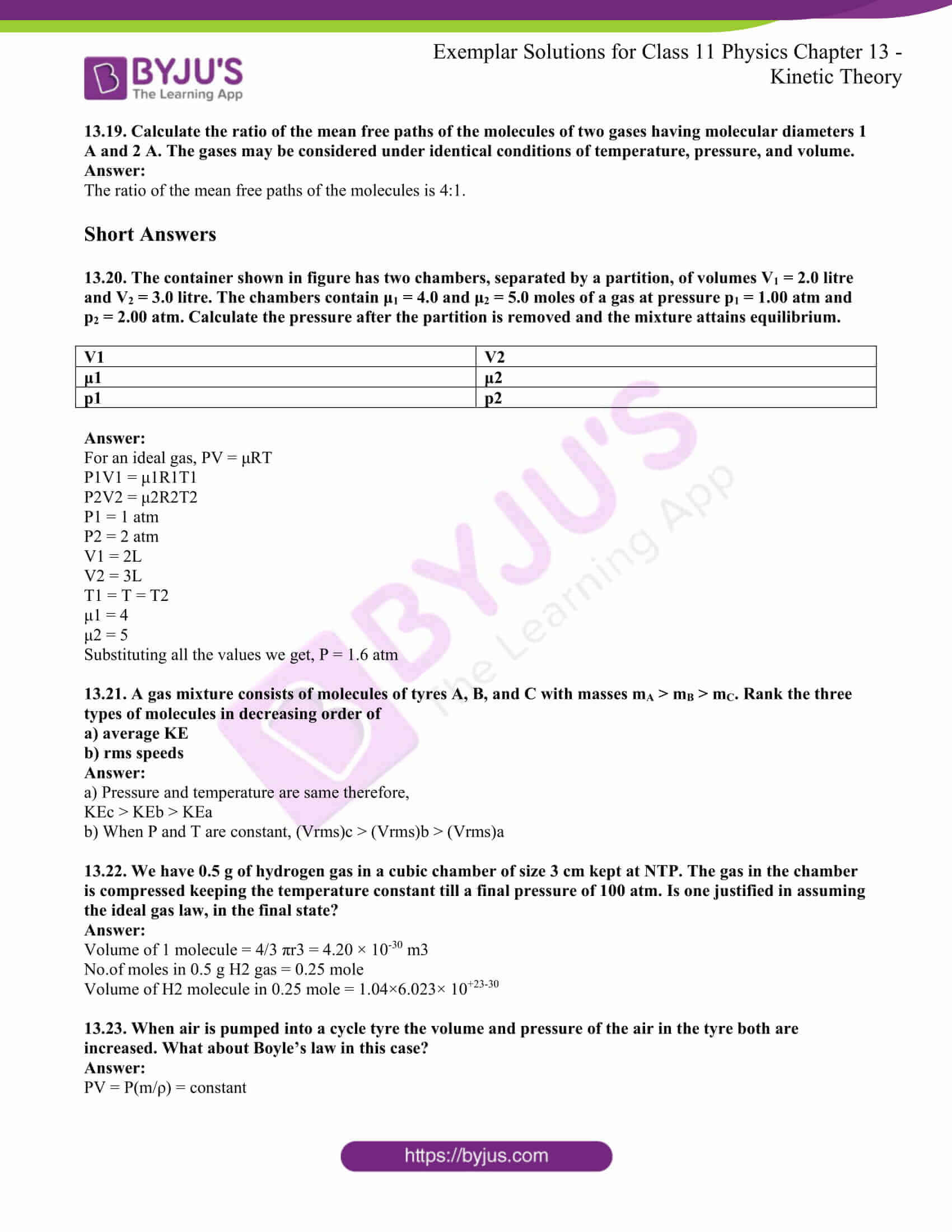 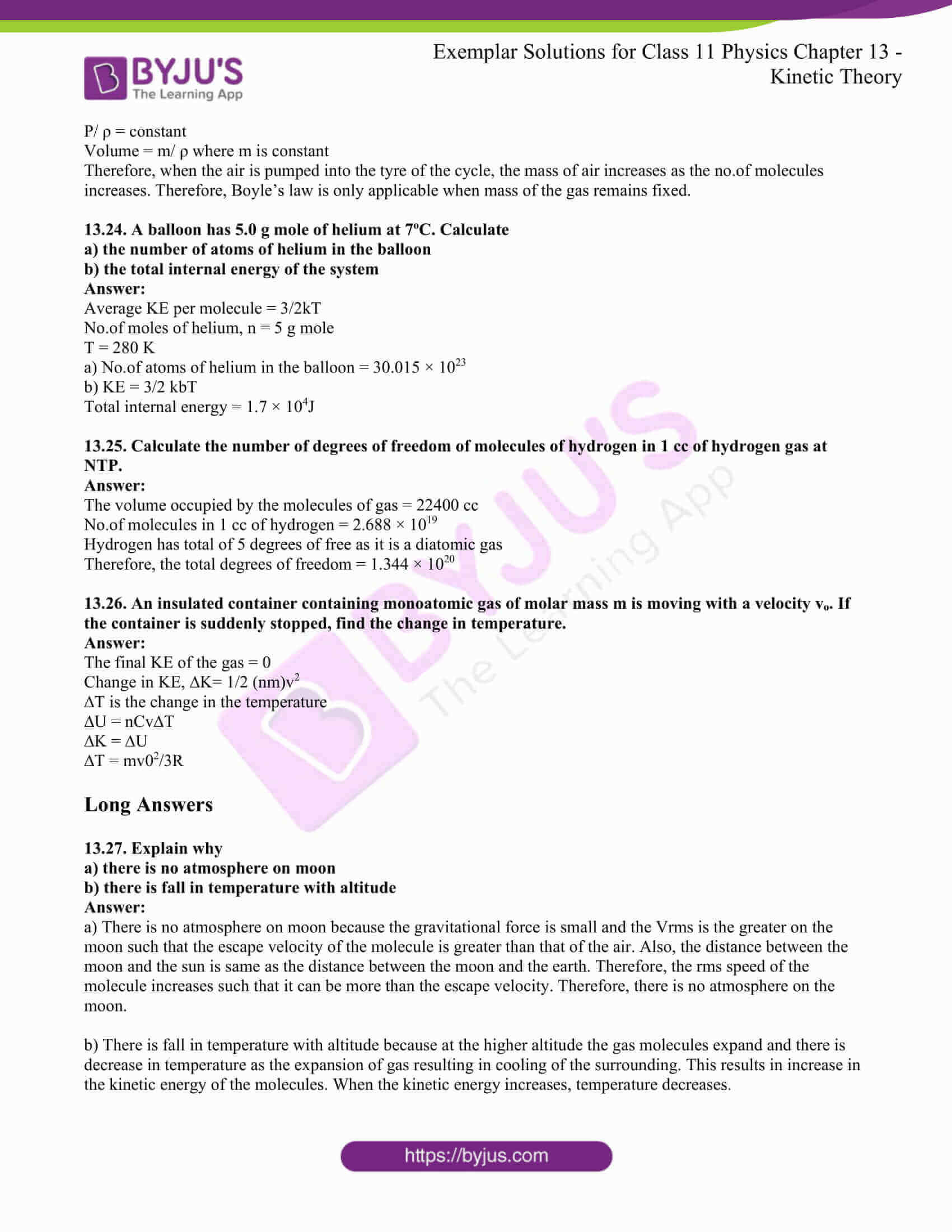 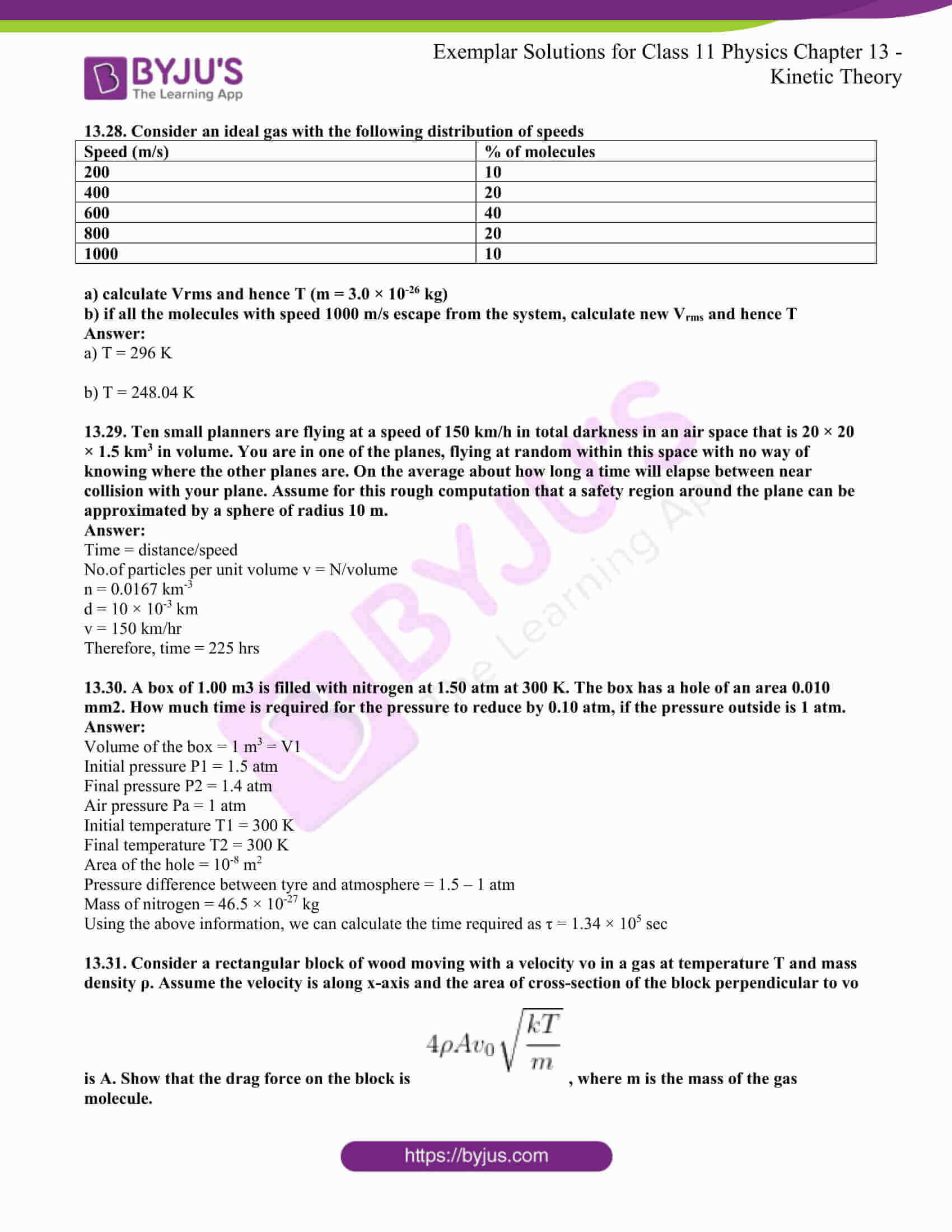 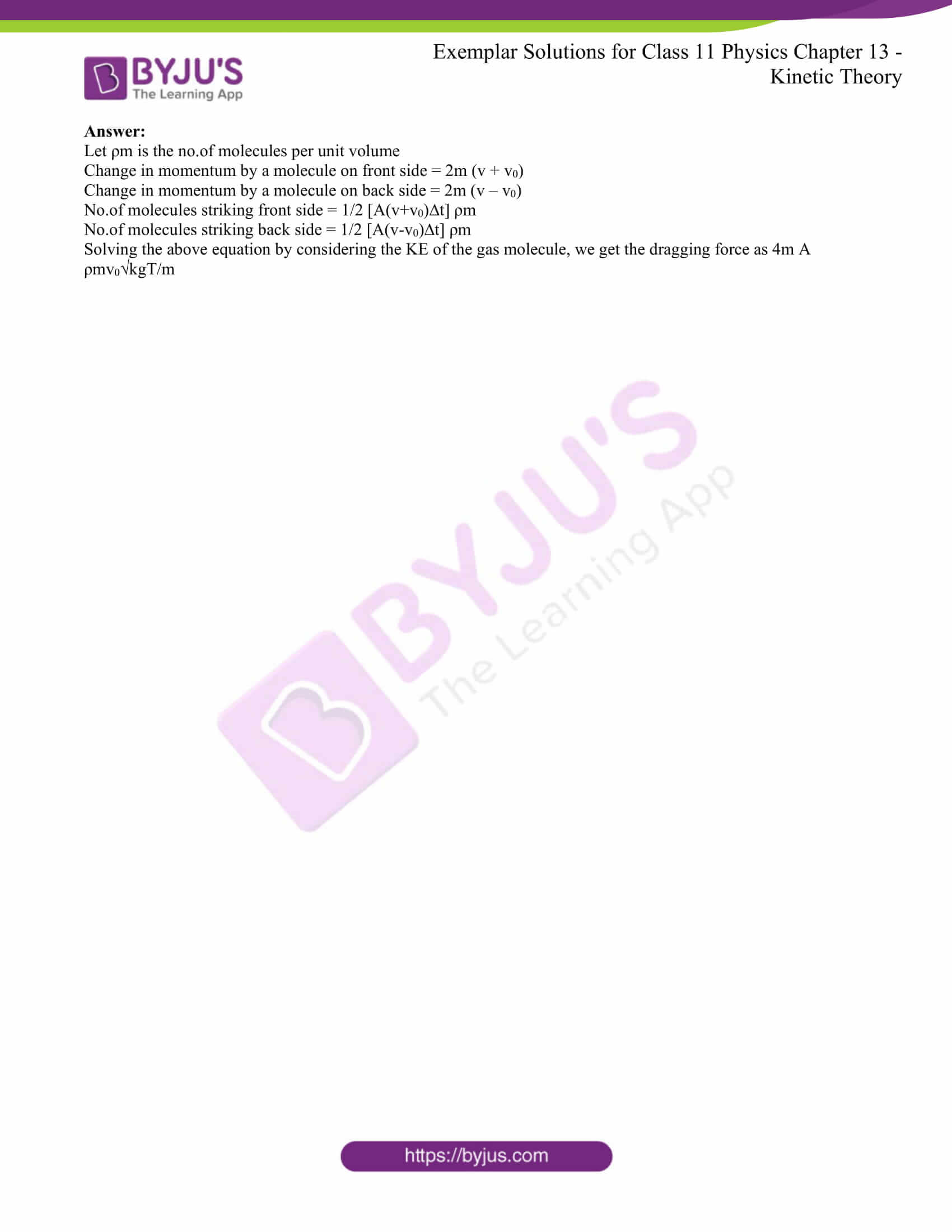 13.1. A cubic vessel (with faces horizontal + vertical) contains an ideal gas at NTP. The vessel is being carried by a rocket which is moving at a speed of 500 m/s in the vertical direction. The pressure of the gas inside the vessel as observed by us on the ground

c) will increase by a factor equal to

where vrms was the original mean square velocity of the gas

13.2. 1 mole of an ideal gas is contained in a cubical volume V, ABCDEFGH at 300 K. One face of the cube (EFGH) is made up of a material which totally absorbs any gas molecule incident on it. At any given time,

a) the pressure on EFGH would be zero

b) the pressure on all the faces will the equal

d) the pressure on EFGH would be half that on ABCD

The correct answer is b) isothermal process

13.4. A cylinder containing an ideal gas is in a vertical position and has a piston of mass M that is able to move up or down without friction. If the temperature is increased,

a) both p and V of the gas will change

b) only p will increase according to Charle’s law

c) V will change but not p

d) p will change but not V

The correct answer is c) V will change but not p

13.5. Volume versus temperature graphs for a given mass of an ideal gas are shown in the figure at two different values of constant pressure. What can be inferred about the relation between P1 and P2?

a) same as the pressure initially

b) 2 times the pressure initially

The correct answer is d) 20 times the pressure initially

13.7. A vessel of volume V contains a mixture of 1 mole of hydrogen and 1 mole of oxygen. Let f1(v)dv, denote the fraction of molecules with speed between v and (v + dv) with f2(v)dv similarly for oxygen. Then

b) f1(v), f2(v) will obey the Maxwell’s distribution law separately

The correct answer is b) f1(v), f2(v) will obey the Maxwell’s distribution law separately

13.8. An inflated rubber balloon contains one mole of an ideal gas, has a pressure p, volume V, and temperature T. If the temperature rises to 1.1T and the volume is increased to 1.05V, the final pressure will be

The correct answer is d) between p and 1.1

13.9. ABCDEFGH is a hollow cube made of an insulator. Face ABCD has a positive charge on it. Inside the cube, we have ionized hydrogen. The usual kinetic theory expression for pressure

a) will be valid

d) will not be valid because isotropy is lost

d) will not be valid because isotropy is lost

13.10. Diatomic molecules like hydrogen have energies due to both translational as well as rotational motion. From the equation in kinetic theory pV = 2/3 E, E is

a) the total energy per unit volume

13.11. Ina diatomic molecules, the rotational energy at a given temperature

b) have the same value for all molecules

c) equals the translational kinetic energy for each molecule

d) is 2/3rd the translational kinetic energy for each molecule

d) is 2/3rd the translational kinetic energy for each molecule

13.12. Which of the following diagrams depicts ideal gas behaviour? 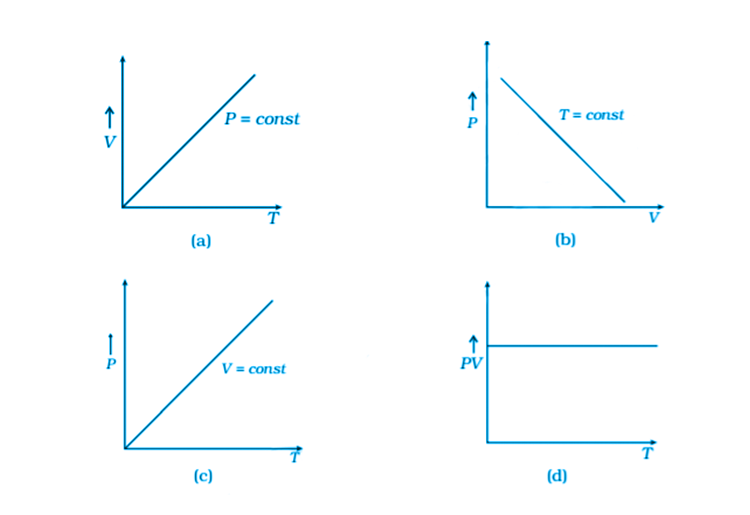 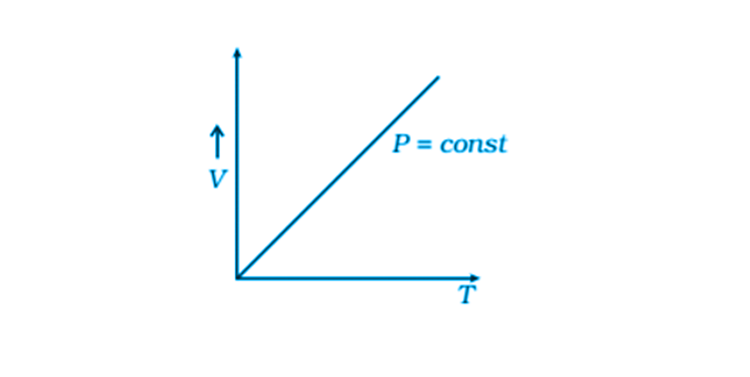 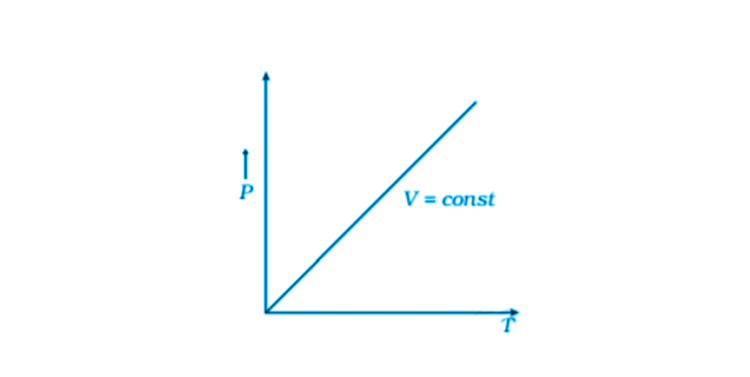 13.13. When an ideal gas is compressed adiabatically, its temperature rises: the molecules on the average have more kinetic energy than before. The kinetic energy increases,

a) because of collisions with moving parts of the wall only

b) because of collisions with the entire wall

d) because of the redistribution of energy amongst the molecules

We know that V is proportional to T

13.18. A gas mixture consists of 2.0 moles of oxygen and 4.0 moles of neon a temperature T. Neglecting all vibrational modes, calculate the total internal energy of the system. (Oxygen has two rotational modes.)

Degree of freedom of oxygen = 5

The total internal energy of the system = 11 RT

13.19. Calculate the ratio of the mean free paths of the molecules of two gases having molecular diameters 1 A and 2 A. The gases may be considered under identical conditions of temperature, pressure, and volume.

The ratio of the mean free paths of the molecules is 4:1.

Substituting all the values we get, P = 1.6 atm

13.21. A gas mixture consists of molecules of tyres A, B, and C with masses mA > mB > mC. Rank the three types of molecules in decreasing order of

a) Pressure and temperature are the same, therefore,

13.22. We have 0.5 g of hydrogen gas in a cubic chamber of size 3 cm kept at NTP. The gas in the chamber is compressed keeping the temperature constant till a final pressure of 100 atm. Is one justified in assuming the ideal gas law, in the final state?

13.23. When air is pumped into a cycle tyre the volume and pressure of the air in the tyre both are increased. What about Boyle’s law in this case?

Therefore, when the air is pumped into the tyre of the cycle, the mass of air increases as the no.of molecules increases. Therefore, Boyle’s law is only applicable when the mass of the gas remains fixed.

a) the number of atoms of helium in the balloon

b) the total internal energy of the system

13.25. Calculate the number of degrees of freedom of molecules of hydrogen in 1 cc of hydrogen gas at NTP.

The volume occupied by the molecules of gas = 22400 cc

13.26. An insulated container containing monoatomic gas of molar mass m is moving with a velocity vo. If the container is suddenly stopped, find the change in temperature.

∆T is the change in the temperature

a) there is no atmosphere on moon

b) there is a fall in temperature with altitude

13.28. Consider an ideal gas with the following distribution of speeds

b) if all the molecules with speed 1000 m/s escape from the system, calculate new Vrms and hence T

13.29. Ten small planners are flying at a speed of 150 km/h in total darkness in an air space that is 20 × 20 × 1.5 km3 in volume. You are in one of the planes, flying at random within this space with no way of knowing where the other planes are. On the average about how long a time will elapse between near collision with your plane. Assume for this rough computation that a safety region around the plane can be approximated by a sphere of radius 10 m.

13.31. Consider a rectangular block of wood moving with a velocity vo in a gas at temperature T and mass density ρ. Assume the velocity is along the x-axis and the area of cross-section of the block perpendicular to vo is A. Show that the drag force on the block is

, where m is the mass of the gas molecule.

Let ρm is the no.of molecules per unit volume

Solving the above equation by considering the KE of the gas molecule, we get the dragging force as 4m A ρmv0√kgT/m

Some of the different macroscopic properties of gases which can be explained with the help of kinetic theory are:

BYJU’S provides best study materials of CBSE class 11 physics. Along with study materials we provide the best feedback from countries top teachers. BYJU’S is committed to giving quality education for the students and to make students score good marks in their examinations.