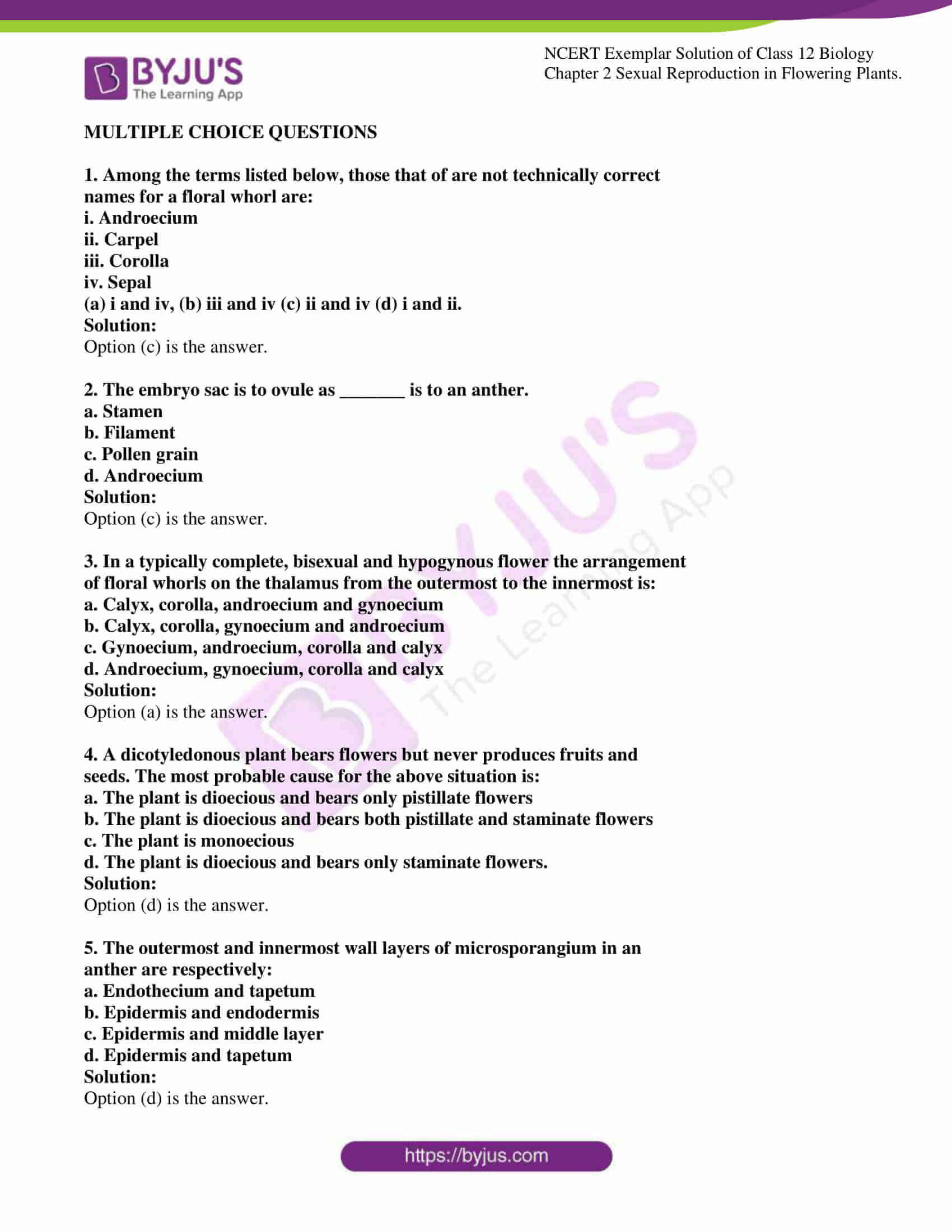 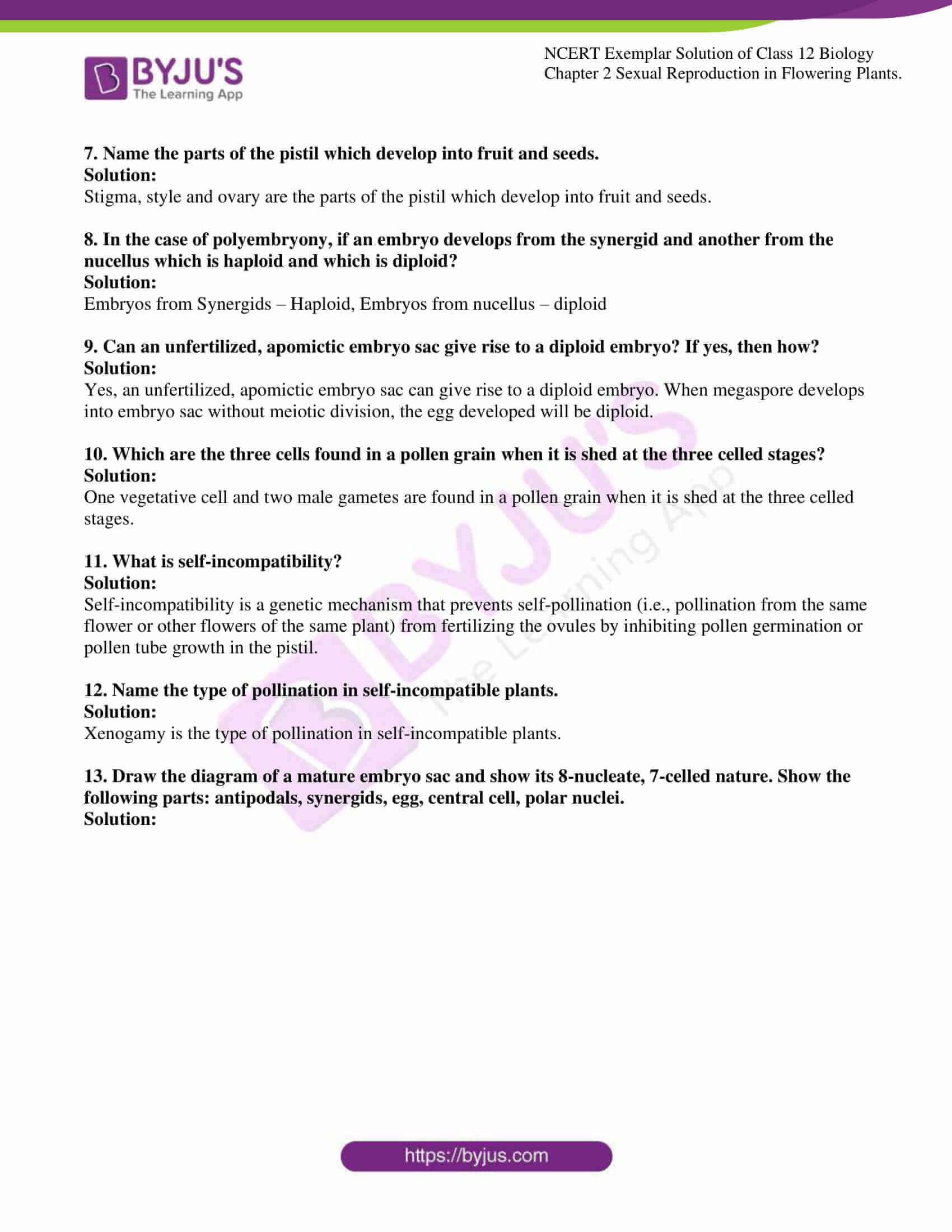 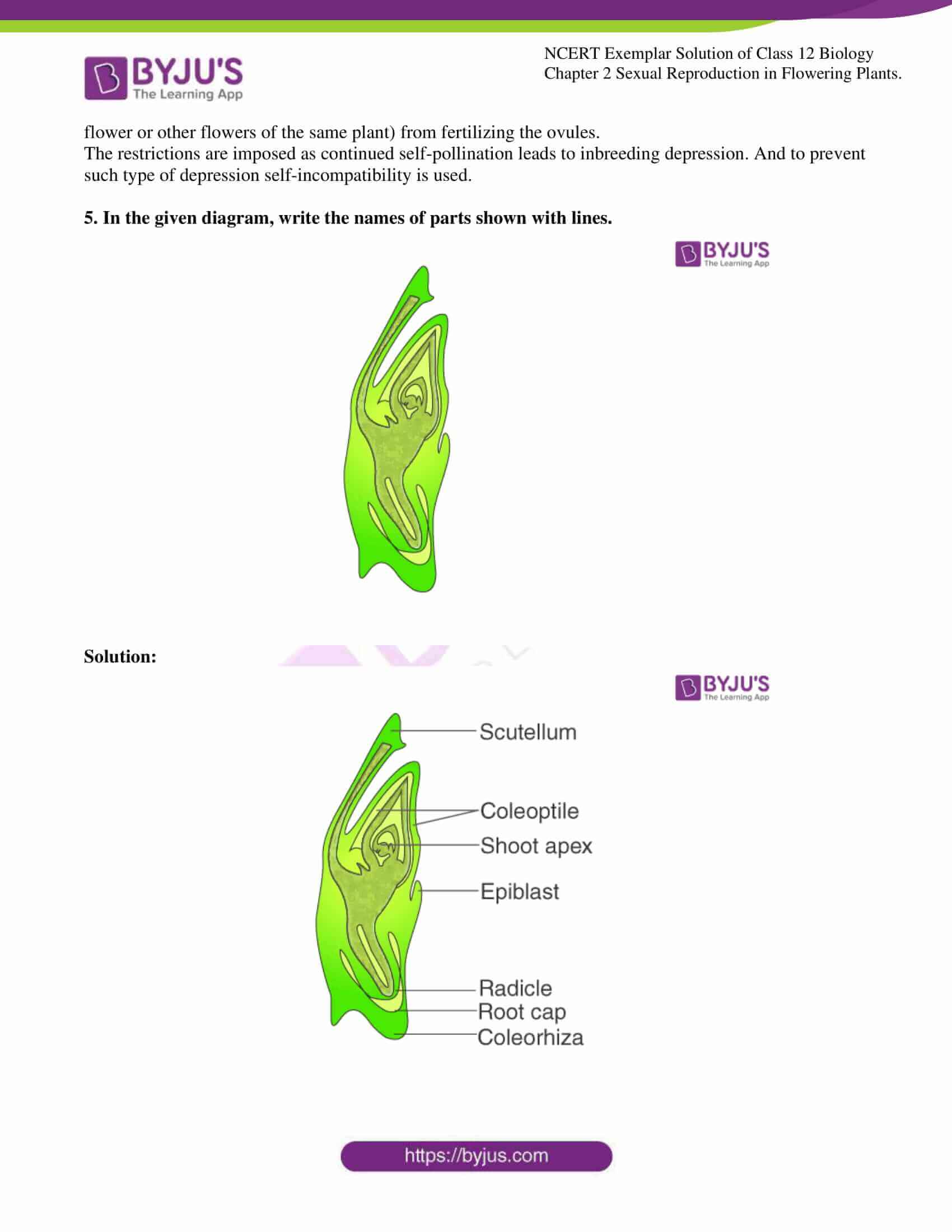 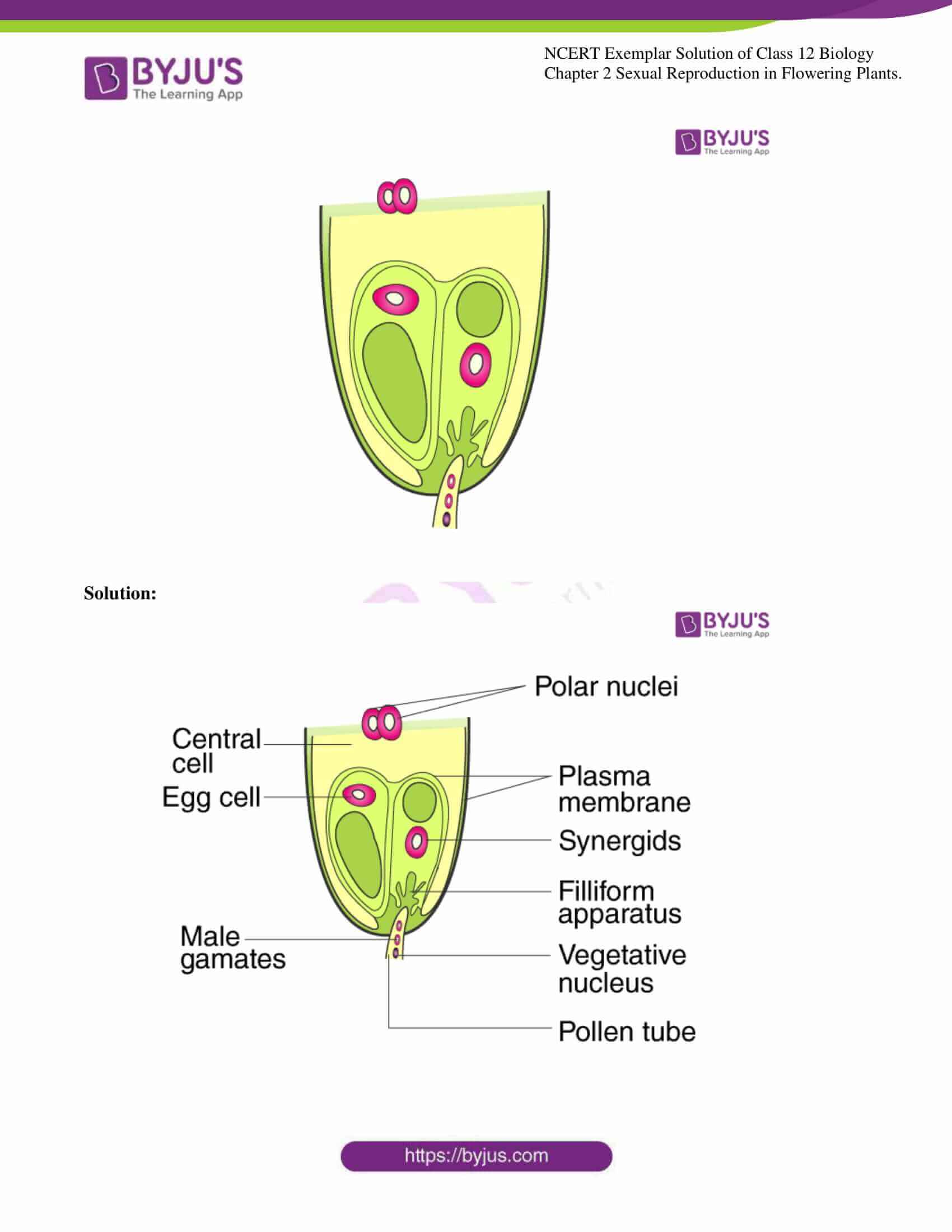 1. Among the terms listed below, those that of are not technically correct

names for a floral whorl are:

3. In a typically complete, bisexual and hypogynous flower the arrangement

of floral whorls on the thalamus from the outermost to the innermost is:

a. Calyx, corolla, androecium and gynoecium

b. Calyx, corolla, gynoecium and androecium

4. A dicotyledonous plant bears flowers but never produces fruits and

seeds. The most probable cause for the above situation is:

a. The plant is dioecious and bears only pistillate flowers

b. The plant is dioecious and bears both pistillate and staminate flowers

c. The plant is monoecious

d. The plant is dioecious and bears only staminate flowers.

5. The outermost and innermost wall layers of microsporangium in an

b. Epidermis and endodermis

6. During microsporogenesis, meiosis occurs in:

7. From among the sets of terms given below, identify those that are

associated with the gynoecium.

8. Starting from the innermost part, the correct sequence of parts in an

9. From the statements given below choose the option that is true for a

i. It is 8-nucleate and 7-celled at maturity

ii. It is free-nuclear during the development of

iii. It is situated inside the integument but outside the nucellus

iv. It has an egg apparatus situated at the chalazal end

Option (c) is the answer

a. Pollen matures before the maturity of ovule

b. Ovules mature before the maturity of pollen

d. Both anther and stigma are of equal lengths.Solution:

11. Choose the correct statement from the following:

12. A particular species of the plant produces light, non-sticky pollen in large

numbers and its stigmas are long and feathery. These modifications

13. From among the situations given below, choose the one that prevents

b. A dioecious plant bearing only male or female flowers

14. In a fertilised embryo sac, the haploid, diploid and triploid

b. Synergid, antipodal and polar nuclei

15. In an embryo sac, the cells that degenerate after fertilisation are:

a. Synergids and primary endosperm cell

b. Synergids and antipodals

16. While planning for an artificial hybridization programme involving

dioecious plants, which of the following steps would not be relevant:

a. Bagging of female flower

b. A dusting of pollen on stigma

17. In the embryos of a typical dicot and a grass, true homologous structures

18. The phenomenon observed in some plants wherein parts of the sexual

apparatus is used for forming embryos without fertilisation is called:

19. In a flower, if the megaspore mother cell forms megaspores without

sac, its nuclei would be:

c. A few haploid and a few diploid

20. The phenomenon wherein, the ovary develops into a fruit without

1. Name the component cells of the ‘egg apparatus’ in an embryo sac.

Synergids, egg cells and the filiform apparatus are the component cells of the egg apparatus in an embryo.

2. Name the part of gynoecium that determines the compatible nature of pollen grain.

The pistil is the part of gynoecium that determines the compatible nature of pollen grain.

3. Name the common function that cotyledons and nucellus perform.

5. Indicate the stages where meiosis and mitosis occur (1, 2 or 3) in the flow chart.

6. In the diagram given below, show the path of a pollen tube from the pollen on the stigma into the embryo sac. Name the components of the egg apparatus.

7. Name the parts of the pistil which develop into fruit and seeds.

Stigma, style and ovary are the parts of the pistil which develop into fruit and seeds.

8. In the case of polyembryony, if an embryo develops from the synergid and another from the nucellus which is haploid and which is diploid?

9. Can an unfertilized, apomictic embryo sac give rise to a diploid embryo? If yes, then how?

Yes, an unfertilized, apomictic embryo sac can give rise to a diploid embryo. When megaspore develops into embryo sac without meiotic division, the egg developed will be diploid.

One vegetative cell and two male gametes are found in a pollen grain when it is shed at the three celled stages.

Self-incompatibility is a genetic mechanism that prevents self-pollination (i.e., pollination from the same flower or other flowers of the same plant) from fertilizing the ovules by inhibiting pollen germination or pollen tube growth in the pistil.

12. Name the type of pollination in self-incompatible plants.

Xenogamy is the type of pollination in self-incompatible plants.

The triploid tissue in a fertilized ovule is endosperm which is developed from the Primary Endosperm nucleus. This triploid condition is achieved by fusion of three haploid nuclei called triple fusion.

15. Are pollination and fertilization necessary in apomixes? Give reasons.

16. Identify the type of carpel with the help of diagrams given below:

(a) is Syncarpous multicarpellary (i.e., have more than one pistil fused).

(b) is Apocarpous multicarpellary (i.e., have more than one pistil but free)

17. How is pollination carried out in water plants?

18. What is the function of the two male gametes produced by each pollen grain in angiosperms?

The two male gametes produced by each pollen grain in angiosperms helps in double fertilization.

iii) The pollen of a flower doesn’t come in contact with the stigma of the same flower can prevent autogamy by placing anther and stigma at a different position.

2. Given below are the events that are observed in an artificial hybridization programme. Arrange them in the correct sequential order in which they are followed in the hybridisation programme.

(a) Re-bagging (b) Selection of parents (c) Bagging (d) Dusting the pollen on stigma (e) Emasculation (f) Collection of pollen from male parent.

(a) Selection of parents is done first.

(d) Collection of pollen from the male parent

(e) Dusting the pollen on the stigma

3. Vivipary automatically limits the number of offspring’s in a litter. How?

A litter is an offspring at one birth of animals from the same mother. A litter usually is 3-8 offspring’s together. The vivipary automatically limits the number of offspring’s in a litter because during the female reproductive cycle limited number of eggs are produced and fertilized.

4. Does self-incompatibility impose any restrictions on autogamy? Give reasons and suggest the method of pollination in such plants.

Self-incompatibility is a genetic mechanism that prevents self-pollination (i.e., pollination from the same flower or other flowers of the same plant) from fertilizing the ovules.

The restrictions are imposed as continued self-pollination leads to inbreeding depression. And to prevent such type of depression self-incompatibility is used.

5. In the given diagram, write the names of parts shown with lines.

6. What is polyembryony and how can it be commercially exploited?

Presence of more than one embryo in a seed is known as polyembryony. It can be commercially exploited in many ways like:

i. It helps in plant breeding

ii. It helps in horticulture

7. Are parthenocarpy and apomixis different phenomena? Discuss their benefits.

Parthenocarpy is the development of fruit without prior fertilization and is seedless. This can be used to produce seedless fruit like grapes, banana etc.

Apomixis is the development of seed without prior fertilization that mimics sexual reproduction.

8. Why does the zygote begin to divide only after the division of Primary endosperm cell (PEC)?

9. The generative cell of two-celled pollen divides in the pollen tube but not in three-celled pollen. Give reasons.

10. In the figure given below label the following parts: male gametes, egg cell, polar nuclei, synergid and pollen tube

1. Starting with the zygote, draw the diagrams of the different stages of embryo development in a dicot.

2. What are the possible types of pollinations in chasmogamous flowers? Give reasons.

Chasmogamous flower flowers with exposed anthers and stigma. The possible pollinations are

1. Autogamy or self-pollination: Pollen and ovules should mature simultaneously.

2. Dichogamy – For this type of pollination synchronisation of pollen release and stigma reception should be avoided that is by avoiding the simultaneous maturing of anther and stigma

3. Self-incompatibility or self-sterility is a genetic mechanism that prevents self-pollination (i.e., pollination from the same flower or other flowers of the same plant)

4. In chasmogamous flower, length of anther and stigma plays a secondary role in autogamy.

5. Geitonogamy – The pollen and pistil mature at different times but are self – compatible.

3. With a neat, labelled diagram, describe the parts of a mature angiosperm embryo sac. Mention the role of synergids.

i. Antipodal: They are 3-celled at the chalazal end of the ovule.

ii. Polar Nuclei: One nucleus from each end of the chalazal end and micropylar end are called Polar Nuclei.

iii. Central cell: It is the largest cell, formed by the fusion of two polar nuclei.

Role of synergids are:

2. Helps in growth of pollen tubes towards the egg

3. Helps in the nutrition of embryo sac by absorption and transport of food from the nucleus through their filiform apparatus.

4. Draw the diagram of a microsporangium and label its wall layers. Write briefly on the role of the endothelium.

5. Embryo sacs of some apomictic species appear normal but contain diploid cells. Suggest a suitable explanation for the condition.

Development of seeing without prior fertilization is known as apomixis and it is observed in few flowering.

It is a form that mimics sexual reproduction. It avoids the processes of meiosis and fertilization, leading to embryo development. The offsprings produced will be identical genetically. Embryo sacs of some apomictic species appear normal but contain diploid cells due to absence of meiotic division at the megaspore mother cell stage. Megaspore mother has a diploid nucleus so that t undergoes mitosis to all the resulting nuclei and cells will be diploid.

This NCERT Exemplar consists of reproduction in flowering plants Class 12 MCQ Short answer questions, Fill in the blanks, match the following, exercises, assignments and sample questions for the preparation of NEET. Students are advised to download and study this NCERT Class 12 Biology Exemplar for Chapter 2 pdf and take a print out if necessary. After studying this exemplar question you will be able to solve the maximum of the question from this topic.

Plant reproduction usually occurs by two methods either asexual or by sexual means. Sexual reproduction in flowering plants occurs through the fundamental processes mainly meiosis and fertilization. During the process of meiosis, the genes get rearranged and the number of chromosomes gets reduced dramatically. When the male and female gametes fuse together, they are called a diploid zygote which further develops into a multicellular sporophyte.