NCERT Class 12 Physics exemplar for Chapter 4 Moving Charges and Magnetism is an important resource material to get well versed with the concepts and to get good marks in class 12 board exams and entrance exams like JEE and NEET. Exemplar problems help you in getting tuned-in with the topics involved in Chapter 4 Moving Charges and Magnetism. Solving different kinds of questions in exemplar book provided by BYJU’S will enhance your information recalling, analytical thinking and problem-solving ability. 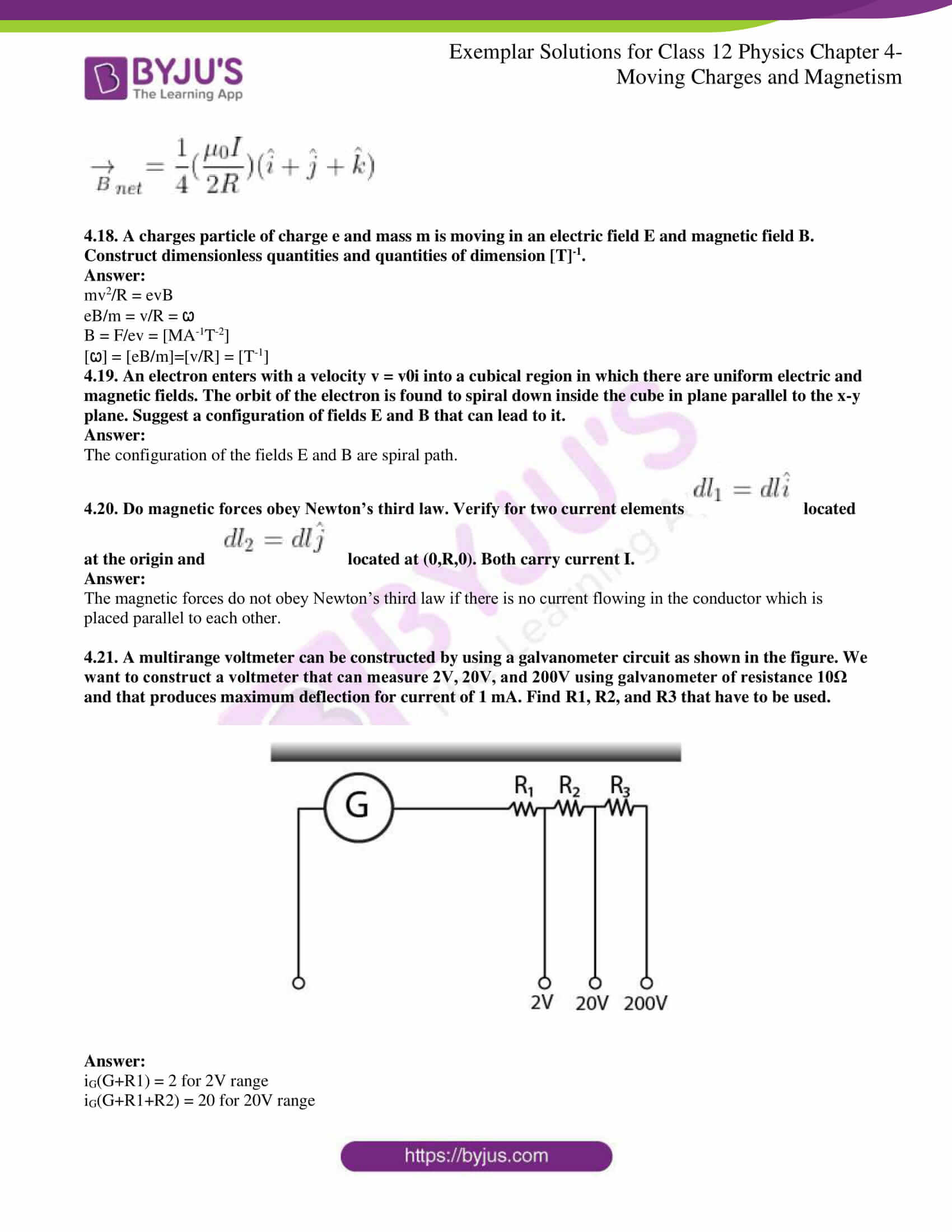 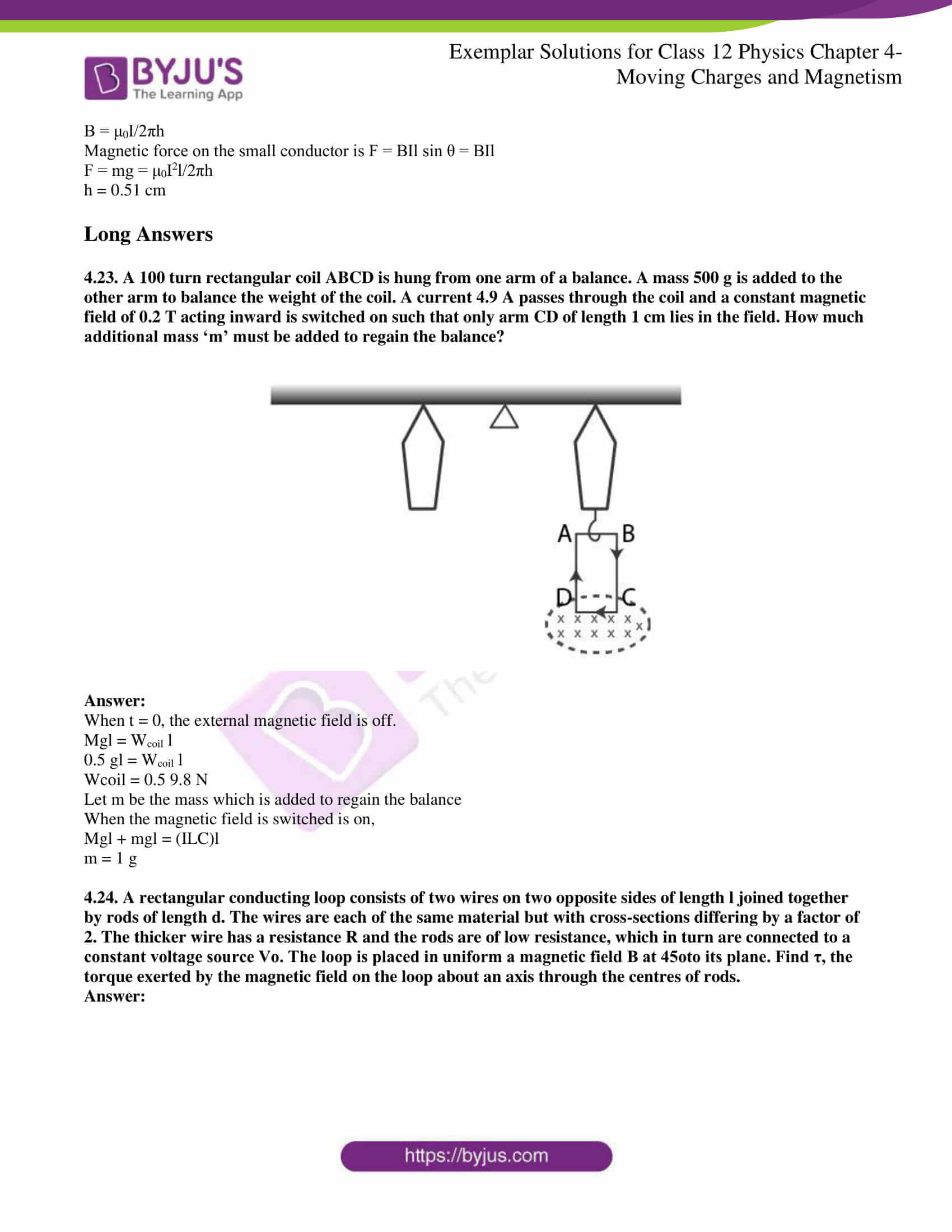 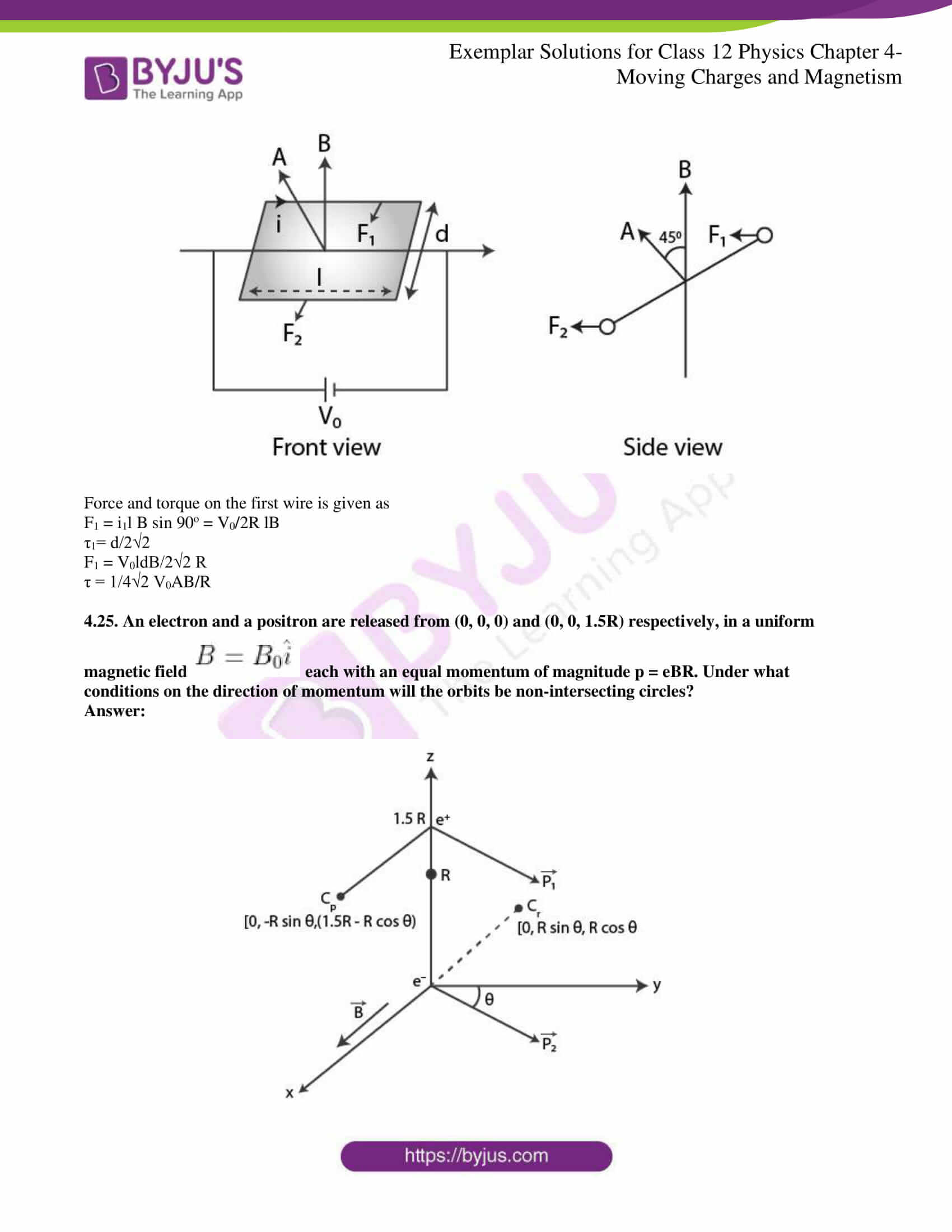 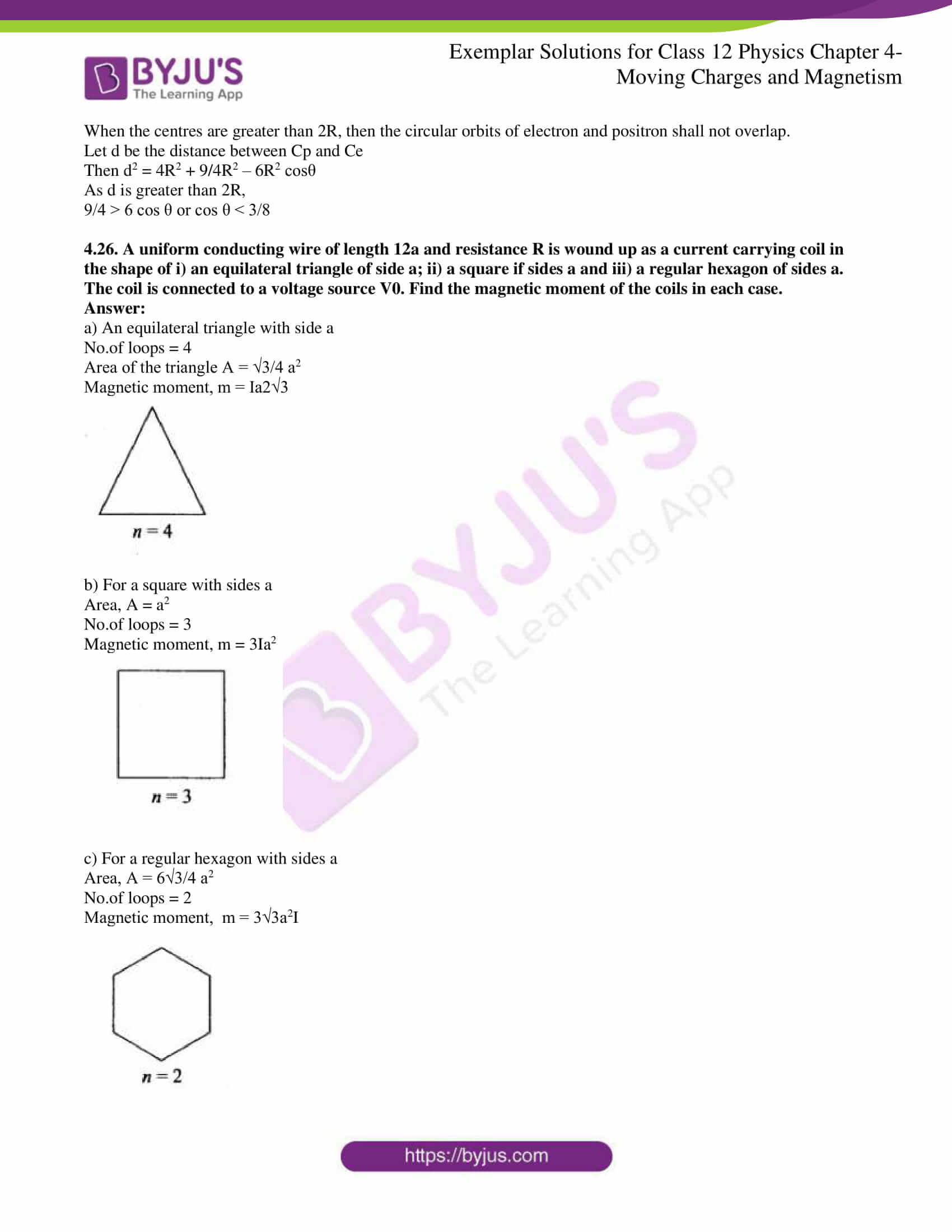 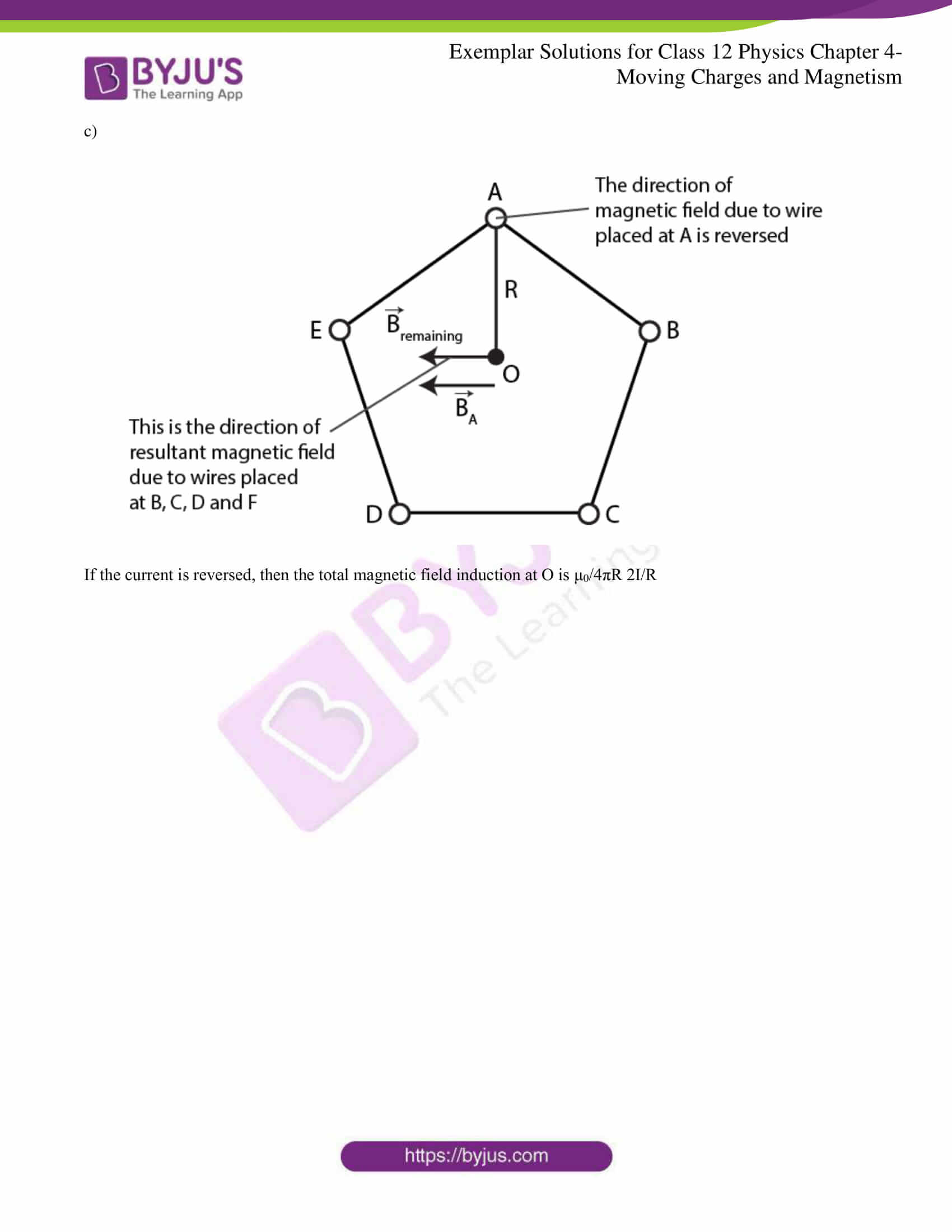 4.1. Two charged particles traverse identical helical paths in an opposite sense in a uniform magnetic field

a) they have equal z-components of momenta

b) they must have equal charges

4.2. Biot-Savart law indicates that the moving electrons produce a magnetic field B such that

4.3. A current circular loop of radius R is placed in the x-y plane with centre at the origin. Half of the lop with x > 0 is now bent so that it now lies in the y-z plane.

a) the magnitude of magnetic moment now diminishes

b) the magnetic moment does not change

a) the magnitude of magnetic moment now diminishes

4.4. An electron is projected with uniform velocity along the axis of a current-carrying long solenoid. Which of the following is true?

a) the electron will be accelerated along the axis

b) the electron path will be circular about the axis

4.5. In a cyclotron, a charged particle

a) undergoes acceleration all the time

b) speeds up between the dees because of the magnetic field

c) speeds up in a dee

d) slows down within a dee and speeds up between dees

a) undergoes acceleration all the time

4.6. A circular current loop of magnetic moment M is in an arbitrary orientation in an external magnetic field B. The work done to rotate the loop by 30o about an axis perpendicular to its plane is

4.7. The gyro-magnetic ratio of an electron in an H-atom, according to Bohr model is

a) independent of which orbit it is in

a) independent of which orbit it is in

4.8. Consider a wire carrying a steady current, I placed un a uniform magnetic field B perpendicular to its length. Consider the charges inside the wire. It is known that magnetic forces do not work. This implies that

c) if the wire moves under the influence of B, no work is done by the force

d) if the wire moves under the influence of B, no work is done by the magnetic force on the ions, assumed fixed within the wire

d) if the wire moves under the influence of B, no work is done by the magnetic force on the ions, assumed fixed within the wire

4.9. Two identical current-carrying coaxial loops, carry current I in an opposite sense. A simple amperian loop passes through both of them once. Calling the loop as C,

b) the value of

is independent of sense of C

d) B vanishes everywhere on C

b) the value of

is independent of sense of C

4.10. A cubical region of space is filled with some uniform electric and magnetic fields. An electron enters the cube across one of its faces with velocity v and a positron enters via opposite face with velocity –v. At this instant,

a) the electric forces on both the particles cause identical acceleration

b) the magnetic forces on both the particles cause equal accelerations

c) both particles gain or lose energy at the same rate

b) the magnetic forces on both the particles cause equal accelerations

c) both particles gain or lose energy at the same rate

4.11. A charged particle would continue to move with a constant velocity in a region wherein,

4.12. Verify that the cyclotron frequency ꞷ = eB/m has the correct dimensions of [T]-1.

4.13. Show that a force that does no work must be a velocity dependent force.

4.15. Describe the motion of a charged particle in a cyclotron if the frequency of the radio frequency (rf) field were doubled.

Therefore, the force on O2 has current I1 zero.

4.17. A current-carrying loop consists of 3 identical quarter circles of radius R, lying in the positive quadrants of the x-y, y-z, and z-x planes with their centres at the origin, joined together. Find the direction and magnitude of B at the origin.

4.18. A charged particle of charge e and mass m is moving in an electric field E and magnetic field B. Construct dimensionless quantities and quantities of dimension [T]-1.

4.19. An electron enters with a velocity v = v0i into a cubical region in which there are uniform electric and magnetic fields. The orbit of the electron is found to spiral down inside the cube in the plane parallel to the x-y plane. Suggest a configuration of fields E and B that can lead to it.

The configuration of the fields E and B are the spiral path.

located at the origin and

The magnetic forces do not obey Newton’s third law if there is no current flowing in the conductor which is placed parallel to each other.

4.21. A multirange voltmeter can be constructed by using a galvanometer circuit as shown in the figure. We want to construct a voltmeter that can measure 2V, 20V, and 200V using galvanometer of resistance 10Ω and that produces maximum deflection for a current of 1 mA. Find R1, R2, and R3 that have to be used.

Solving the above, we get

4.22. A long straight wire carrying a current of 25 A rests on a table as shown in the figure. Another wire PQ of length 1 m, mass 2.5 g carries the same current but in the opposite direction. The wire PQ is free to slide up and down. To what height will PQ rise?

4.23. A 100 turn rectangular coil ABCD is hung from one arm of a balance. A mass 500 g is added to the other arm to balance the weight of the coil. A current 4.9 A passes through the coil and a constant magnetic field of 0.2 T acting inward is switched on such that only arm CD of length 1 cm lies in the field. How much additional mass ‘m’ must be added to regain the balance?

When t = 0, the external magnetic field is off.

When the magnetic field is switched is on,

4.24. A rectangular conducting loop consists of two wires on two opposite sides of length l joined together by rods of length d. The wires are each of the same material but with cross-sections differing by a factor of 2. The thicker wire has a resistance R and the rods are of low resistance, which in turn are connected to a constant voltage source Vo. The loop is placed in uniform a magnetic field B at 45oto its plane. Find τ, the torque exerted by the magnetic field on the loop about an axis through the centres of rods.

Force and torque on the first wire is given as

each with an equal momentum of magnitude p = eBR. Under what conditions on the direction of momentum will the orbits be non-intersecting circles?

When the centres are greater than 2R, then the circular orbits of electron and positron shall not overlap.

Let d be the distance between Cp and Ce

As d is greater than 2R,

4.26. A uniform conducting wire of length 12a and resistance R is wound up as a current-carrying coil in the shape of i) an equilateral triangle of side a; ii) a square if sides a and iii) a regular hexagon of sides a. The coil is connected to a voltage source V0. Find the magnetic moment of the coils in each case.

a) An equilateral triangle with side a

b) For a square with sides a c) For a regular hexagon with sides a

4.27. Consider a circular current-carrying loop of radius R in the x-y plane with centre at the origin. Consider the line integral

b) use an appropriate Amperian loop to that

where I is the current in the wire

c) verify directly the above result

d) suppose we replace the circular coil by a square coil of sides R carrying the same current I. What can you say about It is a monotonically increasing function of L

b) The Amperian loop is given as

d) When a circular coil is replaced with a square coil, it is given as

4.29. Five long wires A, B, C, D, and E each carrying I are arranged to form edges of a pentagonal prism as shown in the figure. Each carries current out of the plane of paper.

The magnetic induction at a point on the axis will be 0 which is represented by R as A, B, C, D, and E are perpendicular to the plane of paper at the given locations.

When the current in one of the wires is switched off, the field μ0/2π i/R will be perpendicular to AO towards left.

If the current is reversed, then the total magnetic field induction at O is μ0/4πR 2I/R

Moving charges and magnetism helps establish a relationship between magnetism and electricity. These moving charges are responsible for the effect of magnetism, however, a charged particle without acceleration can produce an electrical and magnetic field.

Some of the concepts that are introduced in this chapter are: