NCERT Exemplar solutions for Class 7 Science is a premier study material that students should not take lightly. These exemplar problems consist of different variety of questions that help you study the topics covered in the NCERT textbook in a different perspective, thereby guiding you to attain perfection. 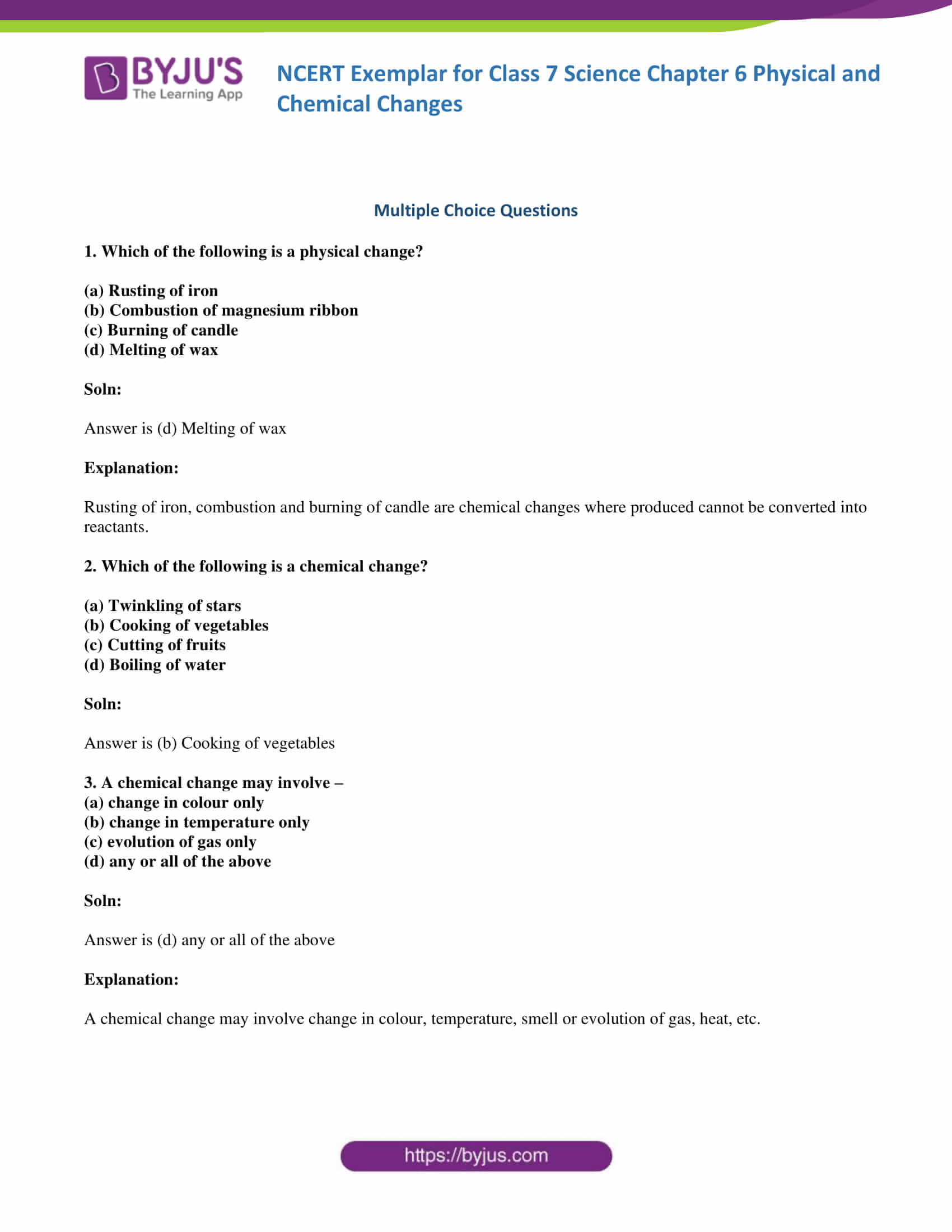 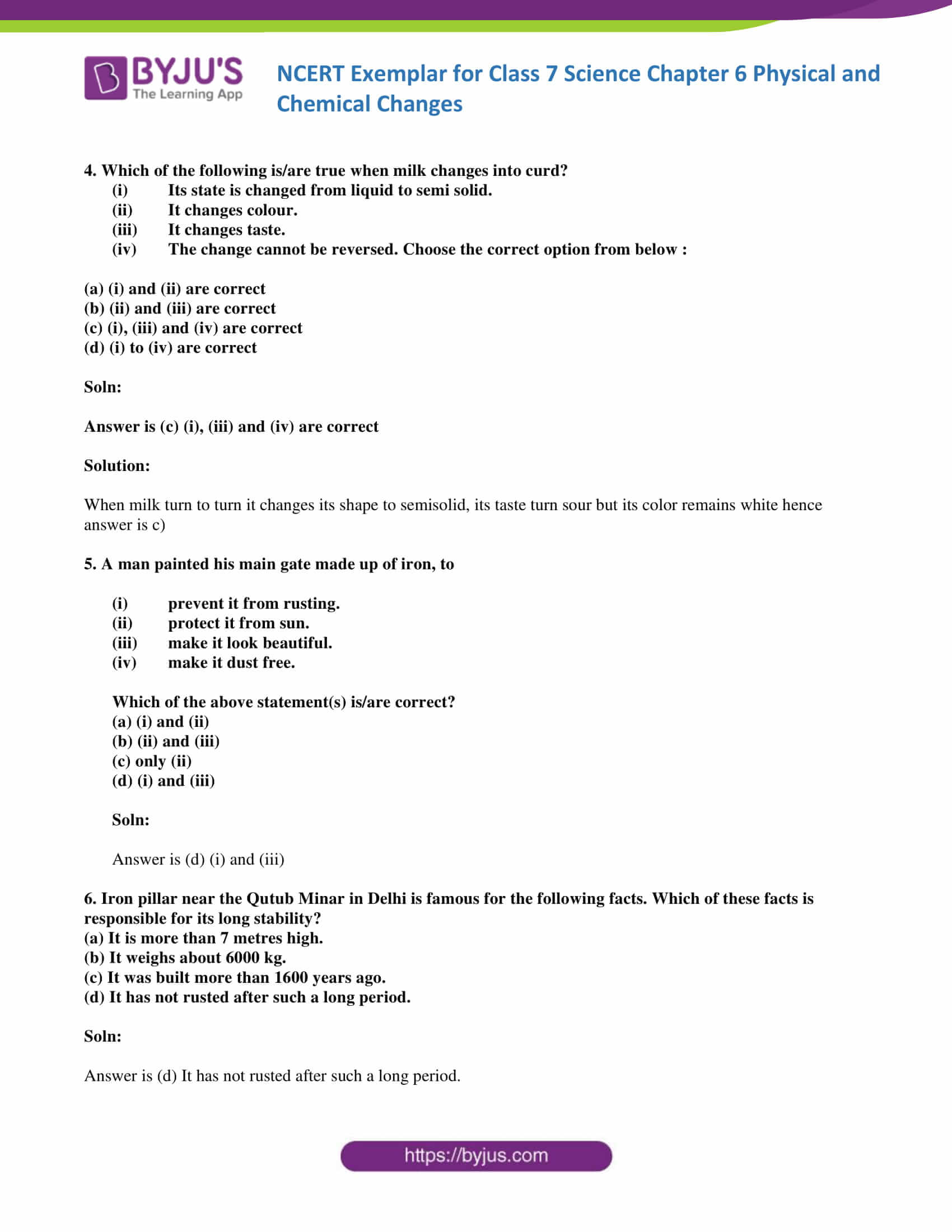 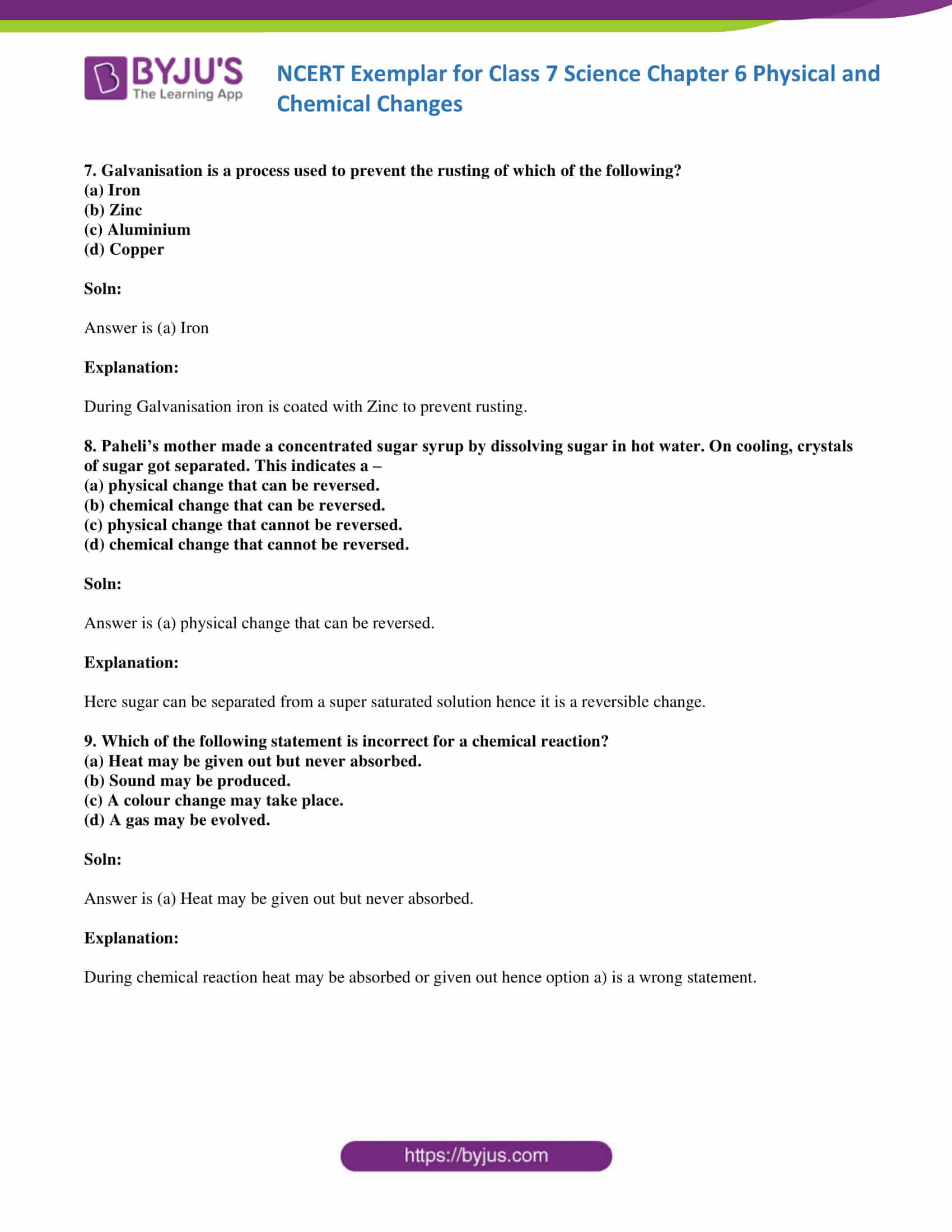 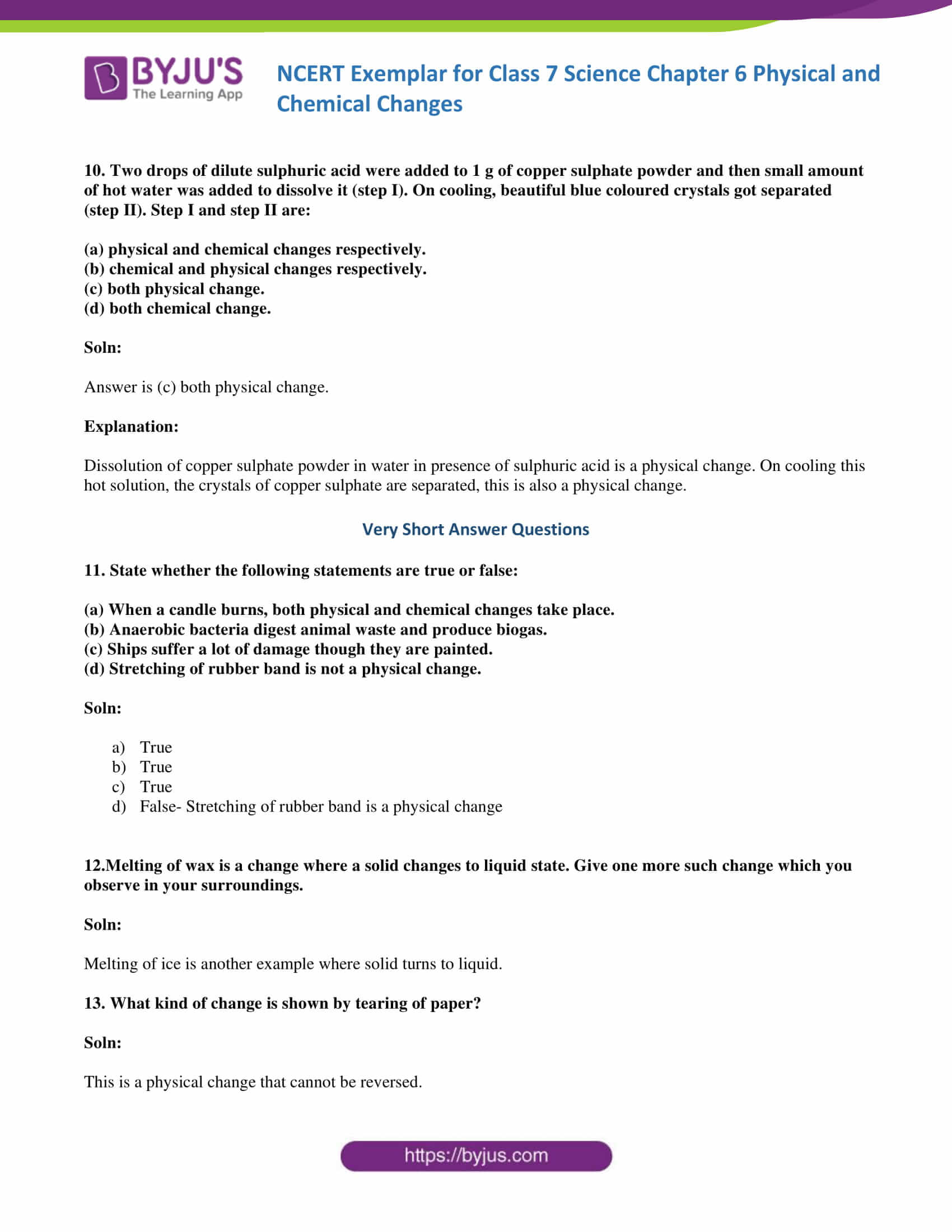 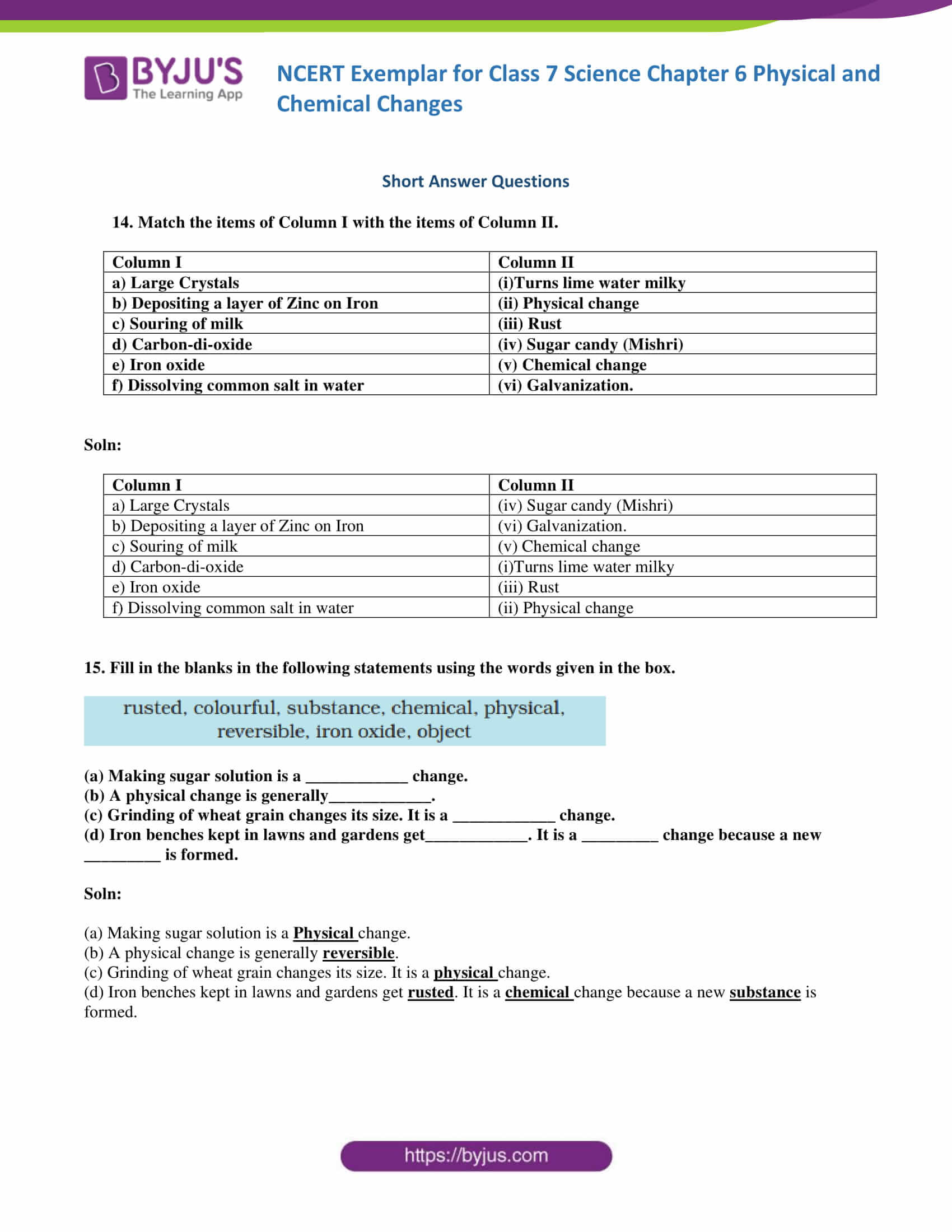 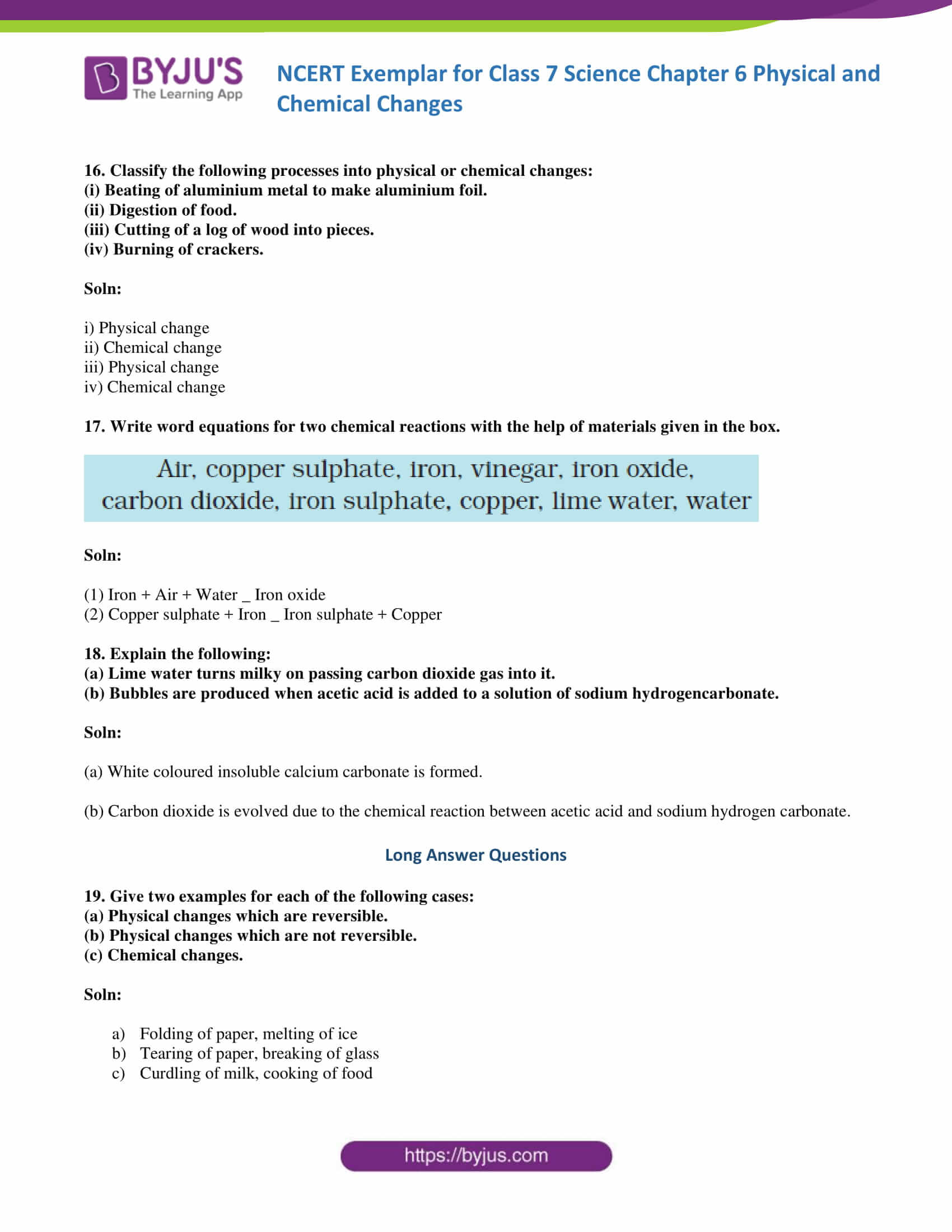 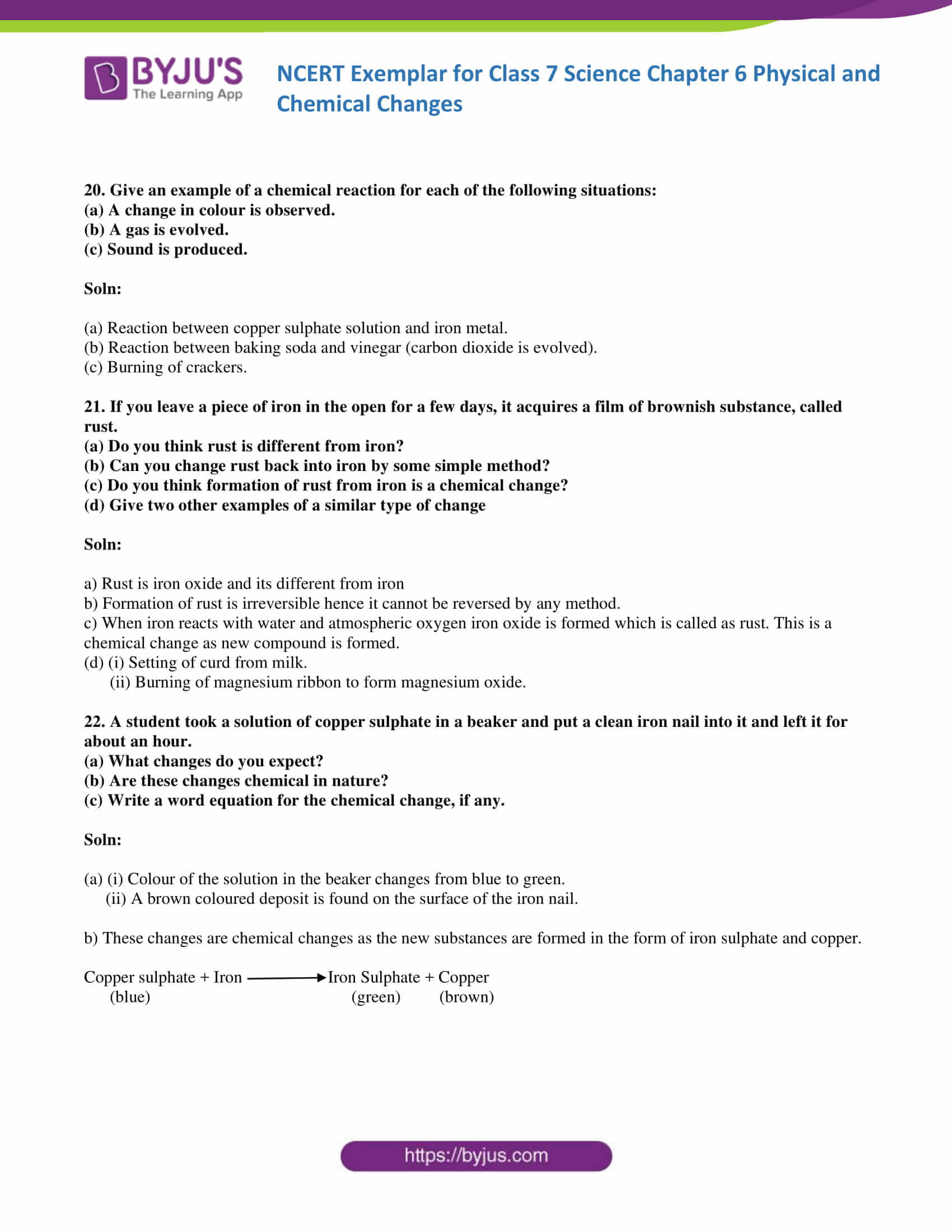 This NCERT Exemplar solution covers questions on changes in the nature of the objects, the process of rusting, burning magnesium ribbon and copper sulphate reactions. Here you can also find the answers to practical questions that involve chemical changes around us.

1. Which of the following is a physical change?

(a) Rusting of iron

(b) Combustion of magnesium ribbon

The answer is (d) Melting of wax

Rusting of iron, combustion and burning of the candle are chemical changes where produced cannot be converted into reactants.

2. Which of the following is a chemical change?

(a) Twinkling of stars

(b) Cooking of vegetables

The answer is (b) Cooking of vegetables

3. A chemical change may involve –

(a) change in colour only

(b) change in temperature only

(c) evolution of gas only

(d) any or all of the above

The answer is (d) any or all of the above

A chemical change may involve a change in colour, temperature, smell or evolution of gas, heat, etc.

4. Which of the following is/are true when milk changes into curd?

When milk turn to turn it changes its shape to semisolid, its taste turn sour but its colour remains white hence the answer is c)

5. A man painted his main gate made up of iron, to

6. Iron pillar near the Qutub Minar in Delhi is famous for the following facts. Which of these facts is responsible for its long stability?

(d) It has not rusted after such a long period.

The answer is (d) It has not rusted after such a long period.

7. Galvanisation is a process used to prevent the rusting of which of the following?

The answer is (a) Iron

During Galvanisation iron is coated with Zinc to prevent rusting.

8. Paheli’s mother made a concentrated sugar syrup by dissolving sugar in hot water. On cooling, crystals of sugar got separated. This indicates a –

(a) a physical change that can be reversed.

(b) the chemical change that can be reversed.

(c) a physical change that cannot be reversed.

(d) the chemical change that cannot be reversed.

The answer is (a) physical change that can be reversed.

Here sugar can be separated from a supersaturated solution hence it is a reversible change.

9. Which of the following statement is incorrect for a chemical reaction?

(a) Heat may be given out but never absorbed.

(b) The sound may be produced.

The answer is (a) Heat may be given out but never absorbed.

During chemical reaction heat may be absorbed or given out hence option a) is a wrong statement.

10. Two drops of dilute sulphuric acid were added to 1 g of copper sulphate powder and a then a small amount of hot water was added to dissolve it (step I). On cooling, beautiful blue coloured crystals got separated (step II). Step I and Step II are:

(a) physical and chemical changes, respectively.

(b) chemical and physical changes, respectively.

The answer is (c) both physical change.

11. State whether the following statements are true or false:

(a) When a candle burns, both physical and chemical changes take place.

(c) Ships suffer a lot of damage though they are painted.

(d) Stretching of the rubber band is not a physical change.

12. Melting of wax is a change where a solid changes to a liquid state. Give one more such change which you observe in your surroundings.

Melting of ice is another example where solid turns to liquid.

13. What kind of change is shown by tearing of paper?

This is a physical change that cannot be reversed.

15. Fill in the blanks in the following statements using the words given in the box.

(a) Making sugar solution is a Physical change.

(b) A physical change is generally reversible.

(c) Grinding of wheat grain changes its size. It is a physical change.

(d) Iron benches kept in lawns and gardens get rusted. It is a chemical change because a new substance is formed.

16. Classify the following processes into physical or chemical changes:

(i) The beating of aluminium metal to make aluminium foil.

(iii) Cutting of a log of wood into pieces.

17. Write word equations for two chemical reactions with the help of materials given in the box.

(a) Lime water turns milky on passing carbon dioxide gas into it.

(b) Bubbles are produced when acetic acid is added to a solution of sodium hydrogen carbonate.

(b) Carbon dioxide is evolved due to the chemical reaction between acetic acid and sodium hydrogen carbonate.

19. Give two examples for each of the following cases:

(a) Physical changes are reversible.

(b) Physical changes are not reversible.

20. Give an example of a chemical reaction for each of the following situations:

(a) A change in colour is observed.

(a) The reaction between copper sulphate solution and iron metal.

(b) The reaction between baking soda and vinegar (carbon dioxide is evolved).

21. If you leave a piece of iron in the open for a few days, it acquires a film of brownish substance, called rust.

(a) Do you think rust is different from iron?

(b) Can you change rust back into iron by some simple method?

(c) Do you think the formation of rust from iron is a chemical change?

(d) Give two other examples of a similar type of change

a) Rust is iron oxide and it’s different from iron

b) Formation of rust is irreversible hence it cannot be reversed by any method.

c) When iron reacts with water and atmospheric oxygen iron oxide is formed which is called rust. This is a chemical change as a new compound is formed.

22. A student took a solution of copper sulphate in a beaker and put a clean iron nail into it and left it for about an hour.

(a) What changes do you expect?

(b) Are these changes chemical in nature?

(c) Write a word equation for the chemical change, if any.

(a) (i) Colour of the solution in the beaker changes from blue to green.

(ii) A brown coloured deposit is found on the surface of the iron nail.

b) These changes are chemical changes as the new substances are formed in the form of iron sulphate and copper.

Melting of wax is a change where a solid changes to a liquid state. Give one more such change which you observe in your surroundings?

Melting of ice is another example where solid turns to liquid.

What kind of change is shown by tearing of paper?

This is a physical change that cannot be reversed.