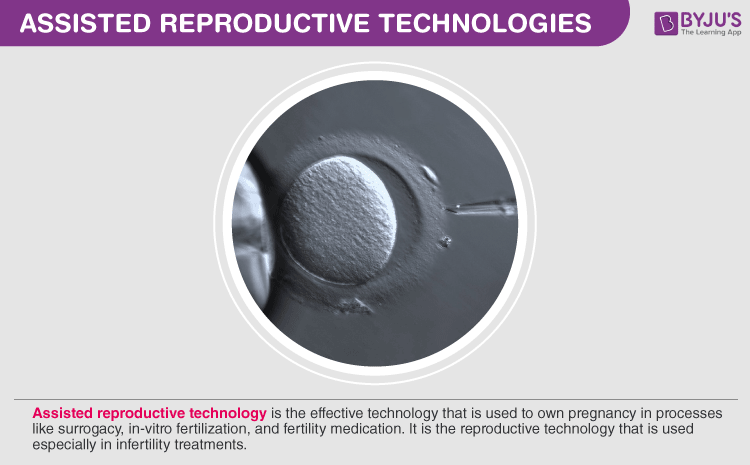 Definition – ” Assisted reproductive technology is a technology used to attain pregnancy through the usage of procedures such as in vitro fertilization, artificial insemination and surrogacy”

Assisted reproductive technology (ART) involves the use of medical techniques to tackle infertility. As per the WHO (World Health Organization), infertility can be defined as the inability to conceive after more than one year without the usage of contraception. Infertility can be seen in both females and males. ART includes the usage of procedures such as ICSI (intracytoplasmic sperm injection), IVF(in vitro fertilization), cryopreservation of embryos or gametes, use of fertility medication and so on. It is referred to as fertility treatment when the procedures are used to deal with infertility. Primarily, ART addresses infertility and reproductive endocrinology. Also, ART plays a role in surrogacy orderings.

Assisted reproductive technology treats infertility and the treatment involves both a man’s sperm and a woman’s egg. The procedure begins by extracting eggs from a woman’s body and then fusing it with the sperm to generate embryos. This embryo is then transferred back into the woman’s body. The most commonly used ART which is the most effective one is the In Vitro fertilization or IVF which is based on this principle.

Several other times, ART techniques make use of donor eggs, donor sperms or embryos that have been frozen previously. In some cases, techniques also involve a gestational carrier or surrogate. A woman who conceives with an egg from a female and sperm from a male partner is referred to as a surrogate. One of the challenges and commonly occurring complications of ART is the occurrence of multiple pregnancies which can be minimized and prevented by restricting the count of embryos that are being inserted into the body of a woman.

Men and women, both could be infertile. Some of the factors or reasons for infertility are:

Some commonly used methods of ART include

2. Gamete intrafallopian transfer (GIFT) – It involves the transfer of sperms and eggs into the fallopian tube of a woman where fertilization takes place.

3. Zygote intrafallopian transfer (ZIFT) – also known as tubal embryo transfer is somewhat similar to IVF wherein fertilization takes place outside the body. The young embryo is then inserted into the fallopian tube and not the uterus.

4. Intracytoplasmic sperm injection (ICSI) – this technique is usually used for couples where the male is infertile. Sometimes it is also used for those with failed IVF attempts or even for older couples. Here the principle that is followed is that a single sperm is introduced into a mature egg, contrary to what is seen in conventional fertilization techniques wherein the sperm and egg is placed in a petri dish and the sperm fertilizes the egg on its own.

5. Artificial insemination – deliberate introduction of sperms into the female’s cervix or uterus to achieve pregnancy without sexual intercourse. It can of the following types:

That was some information on Assisted Reproductive Technology, its types and causes of infertility. For more information, visit BYJU’S. What is assisted reproductive technology?

Assisted reproductive technology is a technology used to attain pregnancy through the usage of procedures such as in vitro fertilization, artificial insemination and surrogacy.

What is ICSI full form in biology?

The full form of ICSI is Intracytoplasmic Sperm Injection – this is a form of IVF.