Ketosis means a metabolic state in our body that is characterized by detectable ketone levels. It takes place when the body does lacks sufficient carbohydrates to burn for energy. It instead burns fat, thus making ketones which can be used for fuel. Ketogenesis is the chemical process which generates those ketones.

Here, let’s understand the meaning of ketosis and ketogenesis in detail.

Ketogenesis is a catabolic pathway of metabolism. In this process, fatty acids and certain ketogenic amino acids are broken down to derive energy by alternative means. Ketone bodies are produced in the ketogenesis process.

Our body continuously produces ketone bodies in low amounts, but in certain cases like starving, when carbohydrates are present in less amount in diet, ketogenesis is preferred to compensate for the energy requirements.

Ketone bodies accumulated in an excess amount may lead to a condition called ketoacidosis, which may be fatal.

What are Ketone Bodies?

Fatty acids undergo 𝛽-oxidation in the liver mitochondria to generate a high amount of energy and form three compounds, that are known as “ketone bodies”. These ketone bodies are water-soluble and do not require lipoproteins for transportation across the membrane. Ketone bodies are lipid molecules having a carbonyl group attached to two -R groups.

The three ketone bodies formed are – Acetoacetate, D-3-hydroxybutyrate, and Acetone

Ketone bodies can be transported easily from the liver to different tissues. The ketone bodies β-hydroxybutyrate and acetoacetate serve as significant sources of energy for outer tissues such as cardiac, skeletal muscle etc.

D-β-hydroxybutyrate gets oxidized to acetoacetate by D-β-hydroxybutyrate dehydrogenase in the extrahepatic tissues. Acetoacetate gets activated to their coenzyme A ester by transfer of CoA from succinyl-CoA which is an intermediate of the citric acid cycle. It is a reaction which is catalyzed by the β-ketoacyl-CoA transferase. Then, thiolase cleaves acetoacetyl-CoA to produce acetyl-CoA that then enters the citric acid cycle. As a result, ketone bodies gets used as fuels in all the tissues. Exception is the liver, it is devoid of β-ketoacyl-CoA transferase.

Ketogenesis occurs continuously in a healthy individual, but under certain conditions, when there is an increased concentration of fatty acids or carbohydrate reserves are decreased, ketogenesis happens at a higher rate:

All the main body parts such as the brain, skeletal muscles, heart, etc. can utilise the energy formed by ketogenesis.

The ketogenesis process occurs primarily in the mitochondria of liver cells. Below are the steps in the process of ketogenesis: 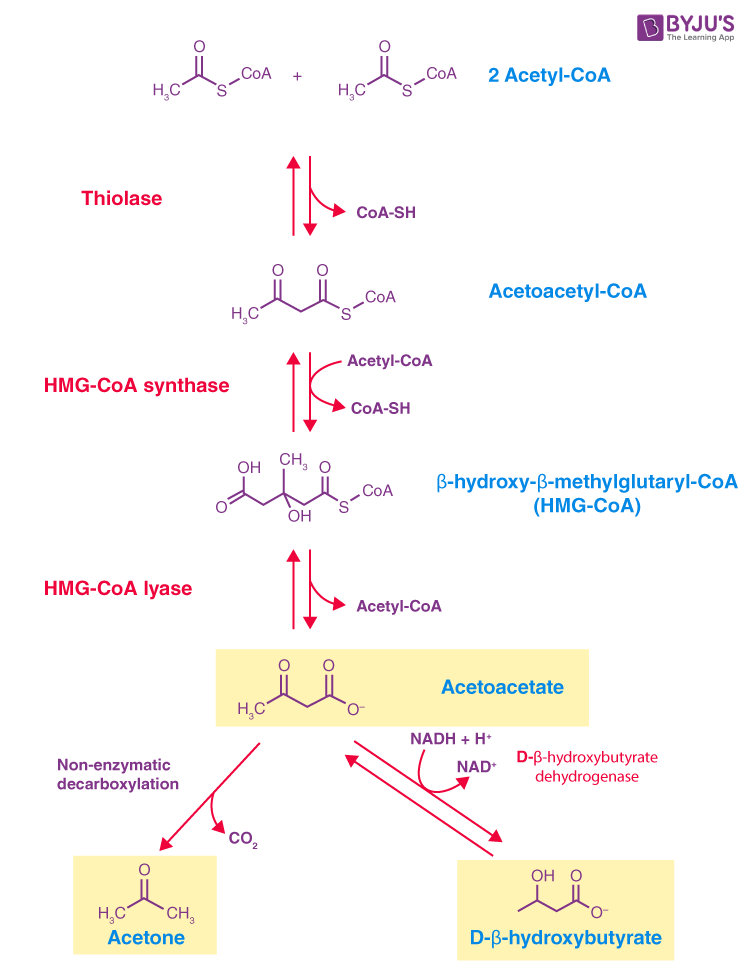 Liver, which produces ketone bodies, primarily in the mitochondria, cannot utilise it due to lack of an enzyme 𝛽-keto-acyl-CoA transferase.

Acetoacetate and D-3-hydroxybutyrate are used by the body to get energy. These ketone bodies are circulated out of the liver cell.

In the extrahepatic tissues, the following reactions occur:

Frequently Asked Questions on What is Ketogenesis?

Ketone bodies are water-soluble molecules; metabolites containing ketone groups which are produced from the fatty acids by the liver. It replaces glucose as the primary fuel of the brain in conditions when there is scarcity of glucose such as during extenuating exercise, fasting for long duration, diabetes etc.

It is a biochemical phenomenon, which generates ketone bodies after disintegrating fatty acids and ketogenic amino acids.

What Is The Difference Between Ketosis And Ketogenesis?

Ketosis is the state wherein our body tends to produce ketones at detectable levels, ketogenesis, on the other hand, is a chemical phenomenon, which generates those ketones. Therefore, ketosis is caused as a result of ketogenesis while ketogenesis is initiated from a lack of glucose.

Where Does Ketogenesis Occur?

The process of ketogenesis mainly takes place in the mitochondria of cells of the liver. Here, fatty acids are supplied to mitochondria through carnitine palmitoyltransferase and disintegrated into acetyl CoA via beta-oxidation.

What happens to ketone bodies?

Ketone bodies get transported readily to tissues outside the liver. It is here where it gets converted to acetyl-CoA that then enters the Krebs cycle and gets oxidized for energy.
Test your Knowledge on Ketogenesis
Q5