Plasmids are extrachromosomal DNA, mostly present in bacteria. They replicate autonomously. The size varies from a few base pairs to thousands bp. Many antibiotic resistance genes are present in plasmids. They are widely used in genetic engineering for manipulating and transferring genes.

1. Which of the following gene helps in identifying transformed cells?

2. If the plasmid and the foreign DNA are cut by the same restriction endonuclease, recombinant DNA can be formed by joining both by

3. Find the incorrect statement about plasmids

(a) they are circular

(b) they replicate independently

(c) they are transferrable

(d) they are single stranded

4. The DNA molecule used for integrating foreign gene for cloning is called

5. Which one of the following is correct for the plasmid pBR322 of E.coli.? 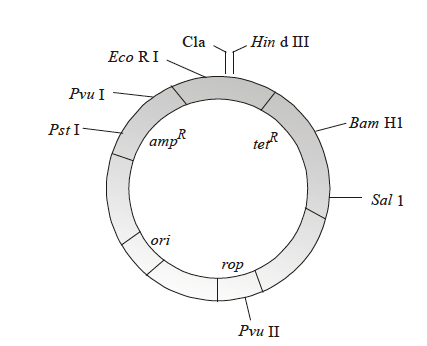 6. The Ti plasmid is found in

(c) Rhizobium of the roots of leguminous plants

7. Replication of plasmid DNA other than initiation is controlled by

(d) none of these

8. Antibiotics are used in genetic engineering. They are useful

(a) to keep culture free of microbial infections

(b) to select healthy vectors

9. A single-stranded, radiolabelled molecule of nucleic acids is called

10. A vector that can clone only a small DNA fragment is