The digital system is built using many logic gates. The logic gate is an electronic circuit having one or more inputs and a single output. These gates are constructed using diodes and transistors. Boolean algebra is the mathematical expression that explains the output of logic gates.

The Logic gates are used to carry out logical operations using single or multiple binary inputs and a single binary output. The input and output of a logic gate are based on certain logic, which is explained using Boolean algebra. Boolean algebra uses only two variables zero or one. The most basic type of logic gates are OR gate, AND gate and NOT gate. In addition to the basic logic gate, there are combination gates like NAND gate, NOR gate, XOR gate, etc made by combining basic logic gates in different ways.

What is a NAND gate?

The symbol of the NAND gate is represented as a combination of AND gate and NOT gate. The Boolean expression is given as \(Y=\bar{A.B}\). 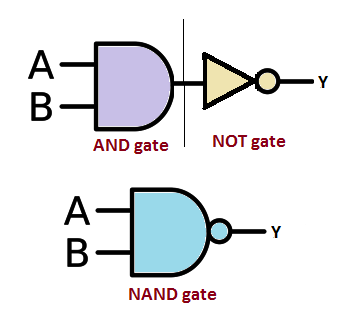 The truth table of a NAND gate is given below

A simple NAND gate can be constructed using transistors and resistors as shown in the figure below. The inputs of the NAND gate are directly connected to the transistor bases. 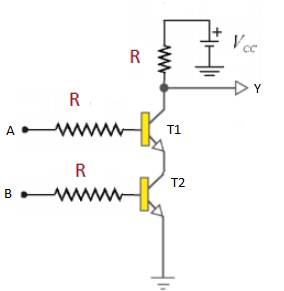