The human brain is divided into three major parts, Forebrain, Midbrain and Hindbrain. The brain is the control centre of all the bodily functions and information processing.

Hindbrain is the lower part of the human brain near the brain stem and is also known as rhombencephalon.

During embryonic development, the anterior end of the neural tube differentiates into three bulges, which are hindbrain, midbrain and forebrain. They differentiate further and develop into the adult brain.

So in an adult, the hindbrain comprises Cerebellum, Pons and Medulla or Medulla oblongata. 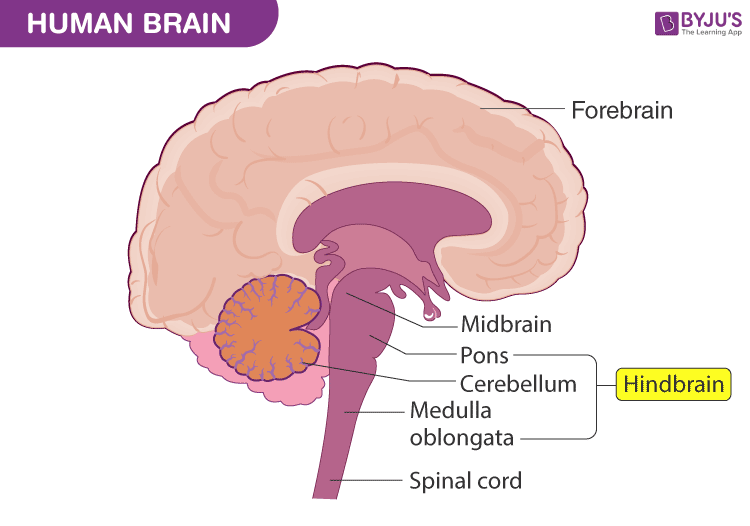 It is a part of the brain stem. It is present below the midbrain and above medulla. It consists of neural tracts, which interconnect different parts of the brain.

It helps in conducting signals from the brain to medulla and cerebellum and carry the sensory signals to the thalamus. Pons helps in relaying information between cerebellum and forebrain.

It is a part of the network of neurons in the brainstem, which regulates alertness and sleep-wake cycle.

The cerebellum has a convoluted surface, which provides more surface to neurons. It is present posterior to the pons. The cerebellum is rich in Purkinje fibres and granule cells.

It is an important part of motor control. It receives sensory signals from the spinal cord and other parts of the brain.

The cerebellum is responsible for equilibrium, posture and muscle tone. It is also known to store unconscious memories and motor skills like swimming, cycling, etc.

Injury to cerebellum results in uncoordinated muscle movements. Activities such as putting a thread in the needle, which requires more precision, become difficult to perform.

The medulla consists of a thick wall having a bundle of axons forming nerve tracts, which connect the spinal cord to different parts of the brain.

The hindbrain regulates many vital processes, which are important for survival such as respiration, cardiovascular reflexes, motor activities, sleep-wake cycle, etc. The main functions regulated by the hindbrain are:

Injury to the pons region may result in difficulty in walking, touch, swallowing, etc.

It is also known to store implicit memories and motor skills like swimming, cycling, etc.

It regulates respiration. It is done by chemoreceptors, which sense the change in the blood pH.

It regulates reflexes such as swallowing, vomiting, coughing, etc.

This was a brief note on Hindbrain. Explore notes on other important concepts related to NEET, only at BYJU’S.