What Causes The Heart Sounds?

The sounds produced or generated by the beating heart during each cardiac cycle, particularly when the heart valves snap shut, are heart sounds. The sounds specifically indicate the turbulence which is generated during the snapping shut of the valves. In cardiac auscultation, examiners can use a stethoscope to hear these distinct and unique sounds, which render information indicating the state of the heart. It can also be detected with the help of a phonocardiograph.

These sounds are generated by the flowing of blood in and out of the chambers of the heart through the valves as and when it closes and opens. Auscultation is utilized in the detection of abnormal or unusual sounds of the heart and decides the course of action further. 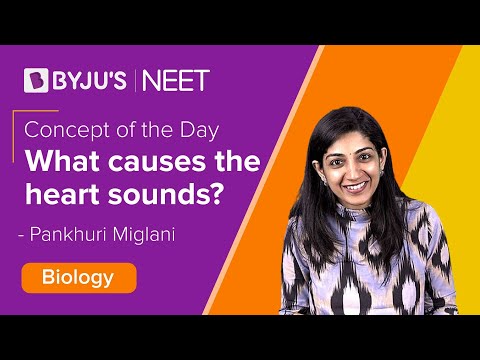 Functioning Of The Heart

The muscular structure, the human heart, has four chambers that pump and receive blood throughout the body. The left atrium picks up the oxygenated blood from the lungs, pumping it into the left ventricle, which in turn pumps the oxygen-rich blood all through the body via a mesh of arteries.

On the other hand, the atrium picks up the deoxygenated blood from the body via veins, pumping it into the right ventricle. The right ventricle pumps blood to the lungs to get oxygenated. The contraction of the left ventricle during pumping out of the blood generates systolic blood pressure in arteries. A mesh of nerve tissues runs through the heart, sending electrical signals to the muscles of the heart, initiating the contraction of the heart.

The flow of blood generates vibrations in the valves and chambers of the heart, producing audible sounds which are audible through a stethoscope. A low-resistance, smooth blood flow is referred to as a laminar flow. When there is a rough flow offering a high-resistance, referred to as turbulent flow. The vibrations increase through the blood flow turbulence depending on the blood vessel’s diameter and the blood’s –

A few functions of the heart which generate heart sounds are –

Heartbeat is constituted by two phases which make up a cardiac cycle. These two phases are –

There are 4 types of heart sounds –

Generally, the heart makes two sounds – “lub” and “dub”. The third and fourth sounds are audible in individuals, however, they could show abnormalities in the functioning of the heart. While the S1 and S2 are high-pitched, S3 and S4 are low-pitched sounds.

Heart murmurs are ectopic or abnormal heart sounds. These occur when there are some valvular or other abnormalities that cause turbulence in the flow of blood, either because of the high velocity of ejection or their regurgitation.

Murmurs are of the following types –

Regurgitation is the flow of the blood in the opposite direction to the normal due to the backward blood flow between chambers or into the heart. It takes place as a result of abnormalities in the valves of the heart.

This was a brief on the causes of heart sounds. Explore related topics on NEET at BYJU’S.