Prism is a transparent optical object with two flat surfaces that have an angle between them. When the light enters the prism, there is a bending of light as there is a change in the speed of light. The bending of the light is dependent on the angle of incidence, normal, and refractive indices. There are four different types of angles involved in this experiment and they are the angle of incidence, angle of emergence, angle of prism and angle of deviation. Below is an experiment to trace the path of light ray through a glass prism.

To trace the path of the rays of light through a glass prism.

Prism is defined as a polyhedron with a triangular base and three triangular lateral surfaces. It is used as an optical object to study the behaviour of white light when it is passed through it. The light bends at various angles like an angle of incidence, angle of reflection, angle of refraction, and angle of deviation.

What is prism formula?

Following is the formula of the angle of prism:

What is angle of deviation?

The angle of deviation is defined as the angle between the incident ray and the emerging ray. It is defined for the triangular prism.

Following are the list of materials required for this experiment: 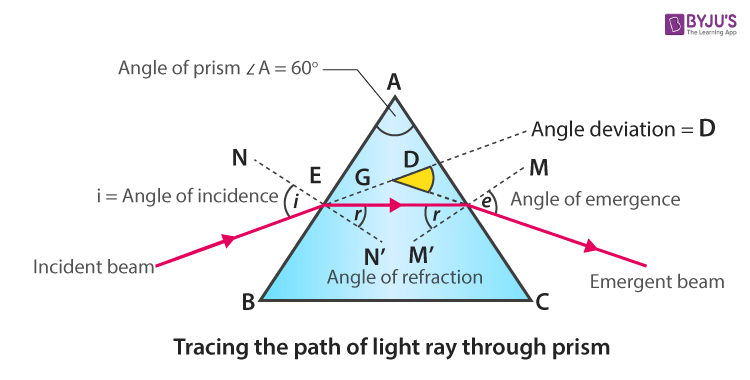 Q2. What is the unit of the refractive index?
Ans: Refractive index has no unit. This is because it is a ratio between the speed of light in vacuum and in the medium.

Stay tuned with BYJU’S to learn other Physics related experiments.