Students are advised to solve at least 2-3 years of previous question papers as there is a chance that few questions might be repeated in the final exam. Previous year question papers also boost the confidence level of the students and teach them time management skills. Refer to these solutions solved by subject professionals while solving the Rajasthan Board‌ ‌Class‌ ‌10‌ ‌Social‌ ‌Science‌ ‌2016 ‌Question‌ Papers. Students can download free pdf of the solutions from the given link below. 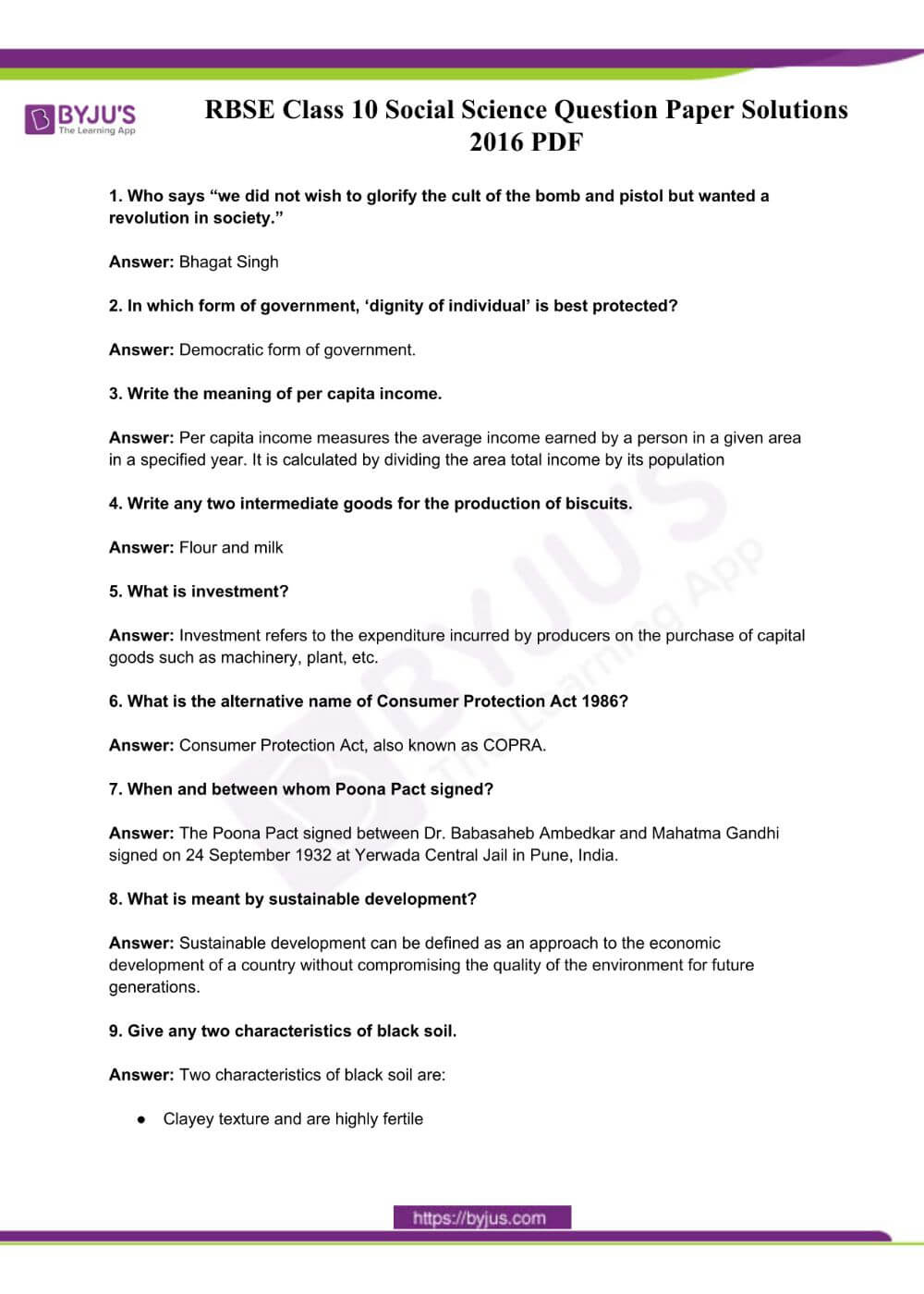 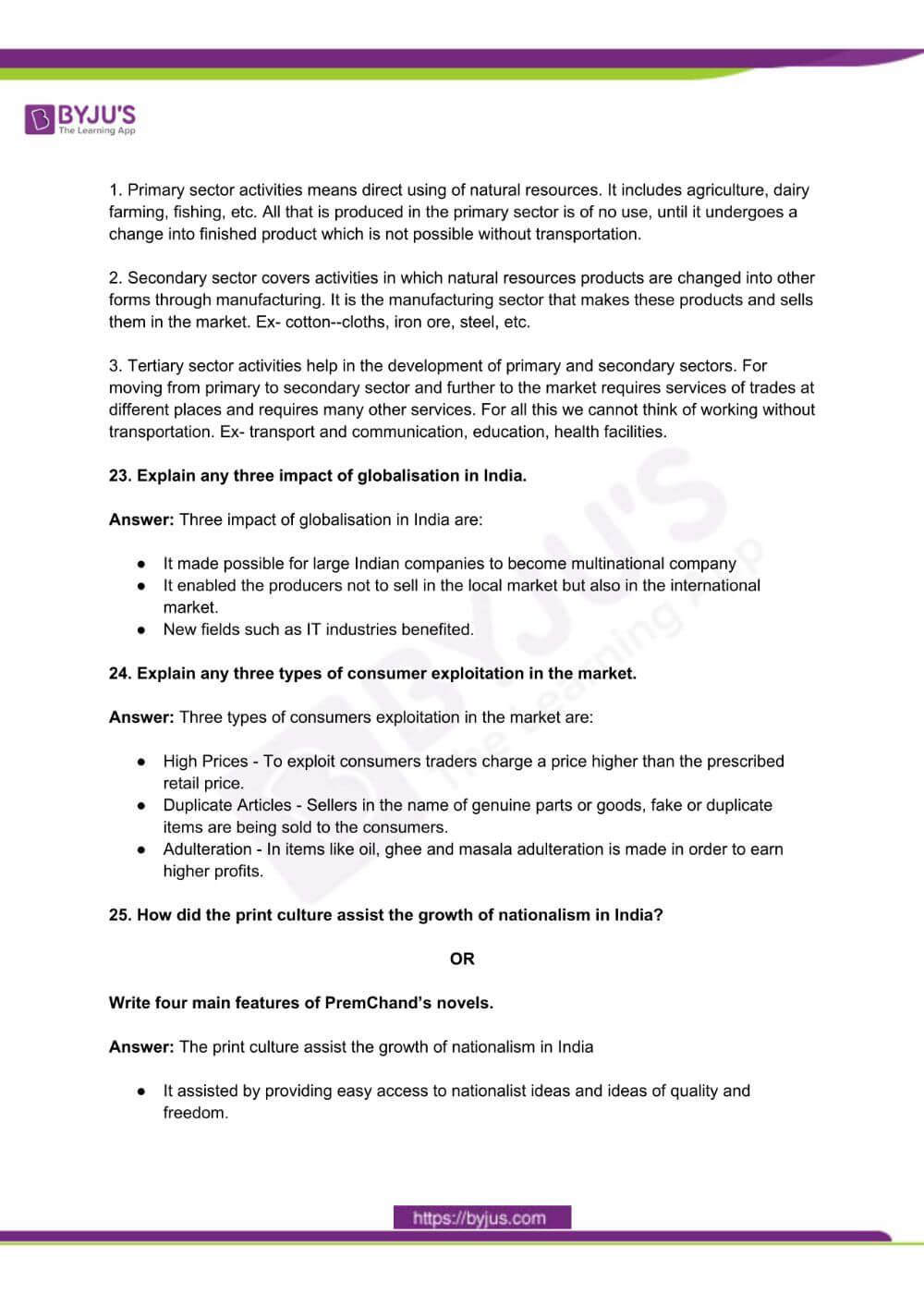 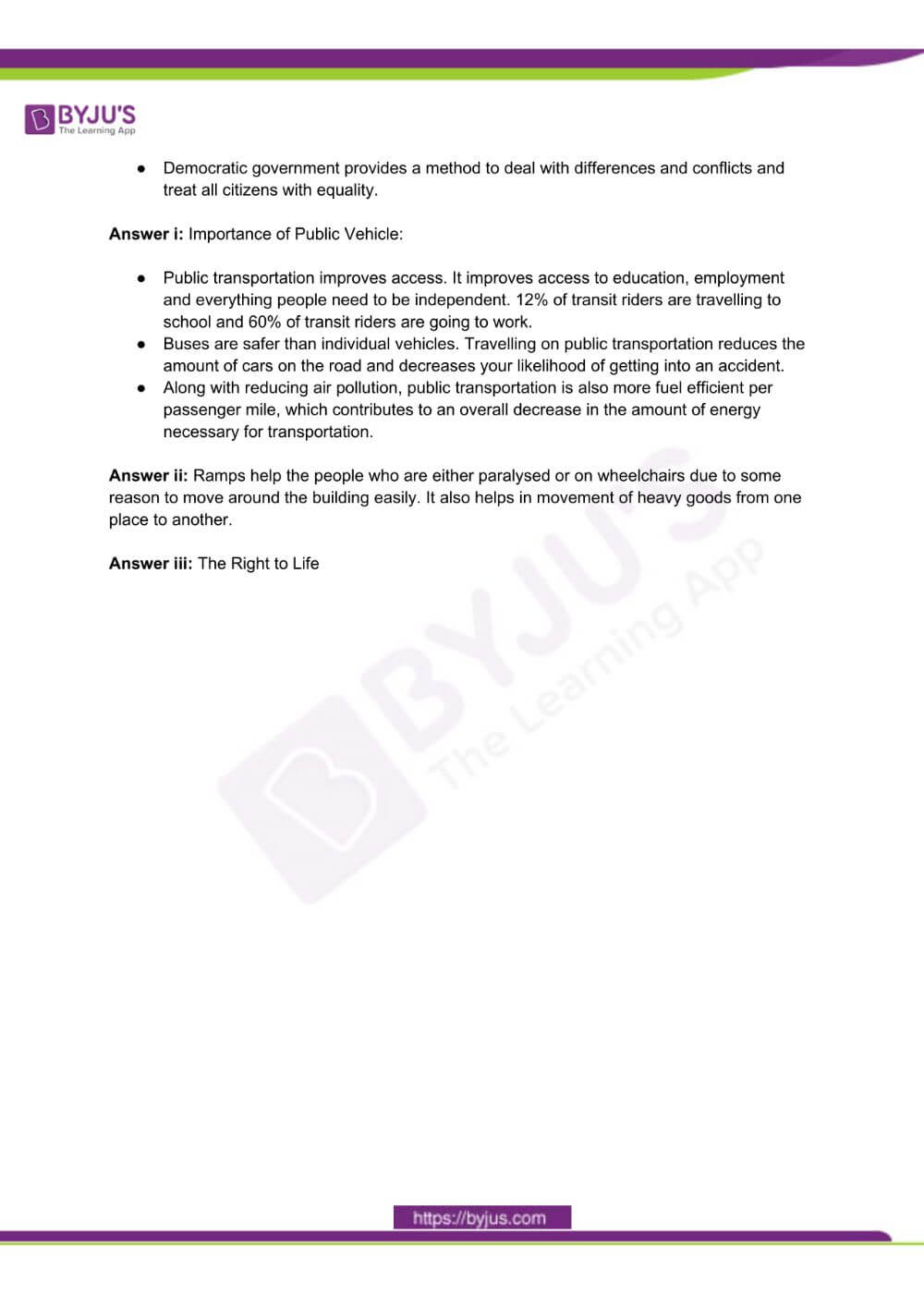 1. Who says “we did not wish to glorify the cult of the bomb and pistol but wanted a revolution in society.”

2. In which form of government, ‘dignity of individual’ is best protected?

3. Write the meaning of per capita income.

Answer: Per capita income measures the average income earned by a person in a given area in a specified year. It is calculated by dividing the area total income by its population

4. Write any two intermediate goods for the production of biscuits.

Answer: Investment refers to the expenditure incurred by producers on the purchase of capital goods such as machinery, plant, etc.

6. What is the alternative name of Consumer Protection Act 1986?

7. When and between whom Poona Pact signed?

8. What is meant by sustainable development?

Answer: Sustainable development can be defined as an approach to the economic development of a country without compromising the quality of the environment for future generations.

9. Give any two characteristics of black soil.

10. Give any two name of endangered species.

11. Explain which way Rain Water Harvesting is carried out in Arid and Semi Arid region of Rajasthan.

Answer: Rain Water Harvesting is carried out in Arid and Semi Arid region of Rajasthan in the following ways

12. Describe the Geographical conditions for Rice production in India.

Answer: Rice is a kharif crop and it is the staple crop of India. The geographical conditions required for growth of Rice are as follows:

13. Describe the importance of Manufacturing Industries.

Answer: The manufacturing sector is considered the backbone of development due to the following reasons:

14. Describe the utility of Road Transportation.

Answer: The utility of Road Transportation:

15. What do you mean by “Bretton Woods Conference”? Which are called the twins of it?

16. What problems were faced by Indian weavers due to British industrialisation?

Answer: The problems faced by Indian weavers due to British industrialisation are:

17. How did Bombay evolve as a modern city?

Answer: When Surat started declining, Bombay started growing. Trade started shifting to the new Bombay port which was controlled by European companies. Bombay started growing as a trading port in 1780’s. In 1854, the first cotton mill came up in Bombay. By 1862, four mills were at work. In Bombay, Parsis built huge industrial empires. In 1911, almost half of workers in Bombay cotton industries came from the neighbouring district of Ratnagiri. People came from other provinces to work in textile mills of Bombay. In 1911, almost 67% of large industries were located in Bombay and Kolkata.

18. How was the history of nationalism in Britain unlike the rest of Europe?

Answer: In Britain the formation of the nation-state was not the result of a sudden upheaval or revolution. It was a long drawn out process. Before the 18th century there was no nation named Britain. The ethnic people living in the Isles were Welsh, Scottish, Irish and English. Their political and cultural traditions were different. As the wealth, power and importance of English started growing they started extending their influence over other islands. The English Parliament took power from the Monarchy in 1688. It was instrumental in forming the nation. In 1707 with Act of Union between England and Scotland resulted. The English people dominated Scottish people and they were not able to practice their culture and traditions. Even the Irish people faced a similar fate. In 1801, Ireland was forcibly made part of the United Kingdom. The British national anthem and flag was promoted.

Answer: The US Army in order to eliminate Guerillas fighters of Vietnam, they burned down the sections of forests and bushes by using NAPALM in flamethrowers. Napalm chemical weapon is a mixture of gasoline, plastic polystyrene and hydrocarbon benzene. Napalm causes unbearable pain on humans and causes death to humans. Agent Orange caused massive damage to agriculture, animals and people. It was primarily used to vacate people from an area. It destroyed all the plants. Due to usage of Agent orange close to 5 million people were killed and approximately half a million children were born with birth defects.

19. Describe any three forms of power-sharing.

Answer: Three forms of power-sharing are:

22. Explain the interdependency of primary, secondary and tertiary sector of an economy.

Answer: The interdependency of primary, secondary and tertiary sector of an economy are:

1. Primary sector activities means direct using of natural resources. It includes agriculture, dairy farming, fishing, etc. All that is produced in the primary sector is of no use, until it undergoes a change into finished product which is not possible without transportation.

2. Secondary sector covers activities in which natural resources products are changed into other forms through manufacturing. It is the manufacturing sector that makes these products and sells them in the market. Ex- cotton–cloths, iron ore, steel, etc.

3. Tertiary sector activities help in the development of primary and secondary sectors. For moving from primary to secondary sector and further to the market requires services of trades at different places and requires many other services. For all this we cannot think of working without transportation. Ex- transport and communication, education, health facilities.

23. Explain any three impact of globalisation in India.

Answer: Three impact of globalisation in India are:

24. Explain any three types of consumer exploitation in the market.

Answer: Three types of consumers exploitation in the market are:

25. How did the print culture assist the growth of nationalism in India?

Answer: The print culture assist the growth of nationalism in India

26. Give the name of a conventional Source of Energy and describe note to anyone.

Give names of Non-ferrous minerals. Describe any two.

Thermal Power: Thermal power is generated using coal. It is a vital source of electric current and its share in the total capacity of the nation in 2004-05 was 70 percent.

Aluminium – Pure aluminium is a silvery-white metal with many desirable characteristics. It is light, non-toxic, non-magnetic and non sparking. It is easily formed, machined and cast. Pure aluminium is soft and lacks strength, but alloys with small amounts of copper, magnesium, silicon, manganese and other elements have very useful properties.

Copper – Copper is malleable, ductile and a good conductor of heat. It is mainly used in electrical cables, electronics and chemical industries.

27. What do you understand by Secular State in India? Explain.

Discuss the reasons for the origin of social differences.

Answer: India is considered to be a secular state which means that the government doesn’t interfere in relation between citizens and God. Also, there is no official religion or state religion and all religions are considered equal. In India, each person has the right to profess, practice and propagate his/her religion. The government does not interfere in the affairs of religious institutions, and cannot apply any taxes on them for the running of the institutions.

Answer: Some basis of origins of social differences are:

28. Explain the various stages of ‘Second Movement for Democracy’ in Nepal.

Answer: The various stages of ‘Second Movement for Democracy’ in Nepal

Answer: Four major efforts to reform the political parties in India are:

29. In your opinion between formal and informal credit, which one is superior and why?

In your opinion, between the barter system and monetary system, which one is superior and why?

30. (A) Mark the following in the given outline map of India –

(B) Mark the following in the given outline map of India −

Answer A and B: Activity to be done by yourself.

31. A “Democratic Government is better than any other form of Government”. Explain.

B. (i) Give importance to Public Vehicle.

(ii) Write the use of ramp.

(iii) Which right of the individual is violated by Road accident?

Answer A: Democracy is considered the best form of government because:

Answer i: Importance of Public Vehicle:

Answer ii: Ramps help the people who are either paralysed or on wheelchairs due to some reason to move around the building easily. It also helps in movement of heavy goods from one place to another.

Answer iii: The Right to Life