Q.1. How many ATP molecules are formed when 2 NADH + H+ formed in glycolysis enter ETS via malate aspartate shuttle?

Q.3. What is the site of Krebs cycle in cells?

Q.4. How many ATP molecules are formed as a net gain in anaerobic respiration?

Q.5. Which of the following molecules is called the universal energy coin of the cell?

(b) In a matrix of mitochondria.

(d) On the outer membrane of mitochondria.

Sol:(b) In a matrix of mitochondria.

Q.7. Which of the following substrates has the R.Q value less than one?

Q.8. Who proposed the chemiosmotic theory of oxidative phosphorylation?

Q.9. Which of the following acts as a respiratory substrate during protoplasmic respiration?

Sol. Respiratory  Quotient (RQ) is defined as the ratio of carbon dioxide and the oxygen used during the process of respiration.

Q.2.What is the mechanism of aerobic respiration?

Sol. The different stages of aerobic respiration are:

Q.3. What is aerobic respiration?

The below-given chemical equation describes the complete process of photosynthesis or the aerobic respiration in plants.

Q.4. What is cellular respiration?

Q.5. What is the respiratory organ in woody stems?

Sol. The respiratory organ consists of all the organs involved in the respiration process. In hard and woody stems, respiration or the exchange of gases takes place through lenticels. They are the small pores, scattered all over the bark and are found in all trees.

Q.7. What is fermentation?

Sol. Fermentation is a chain of chemical reactions or a metabolic process through which all living organisms obtain the energy required for the biological processes. It is an Anaerobic Pathway, which is used for producing alcoholic beverages, Yogurt and other food products.

Q.8. Where does cellular respiration occur in plant cells?

Q.9. What is anaerobic respiration?

Q.10. What are the factors affecting the rate of respiration?

The internal factors are — Protoplasm, respiratory factor, age of the cell and injury and wound.

Q.12.What is the respiration quotient of carboxylic acids?

Sol. In a few plants, respiratory substrates are carboxylic acid, which has more oxygen compared to carbon in its molecule. That is why, for the oxidation of these substances, the need for external oxygen is very less and carbon dioxide is released in high amounts. Therefore, the respiratory quotient is always more than one.

The Respiratory quotients of citric acid and malic acid are 1.14 and 1.33, respectively.

Q.13. Why do fruits and vegetables remain fresh for a longer duration in cold storage?

Sol. Fruits and vegetables have a long life when they are stored in cold storage. This is because, at low temperature, the rate of respiration is very low and the microbial activity is extremely low. Therefore, the fruits and vegetables escape spoilage and remain fresh and safe for a longer duration.

Q.14.What is the difference between free-floating respiration and protoplasmic respiration?

Q.15. What is the respiratory substrate?

Q.16. What are the sites of respiration?

Sol. Main sites for respiration in all eukaryotic organisms is mitochondria. It is a double membrane cell organelle which is bounded with the external and internal membrane. These membranes are made up of lipoprotein.

Q.17. What is the use of respiratory quotient (RQ)?

Sol. Pentose Phosphate Path (PPP) is an alternative path for complete oxidation of glucose. In this process, hexose sugar is oxidized through the involvement of five carbon-containing sugar. This is called the Pentose Phosphate Path. Racker and co-workers were the first to study the reaction of PPP in 1954. 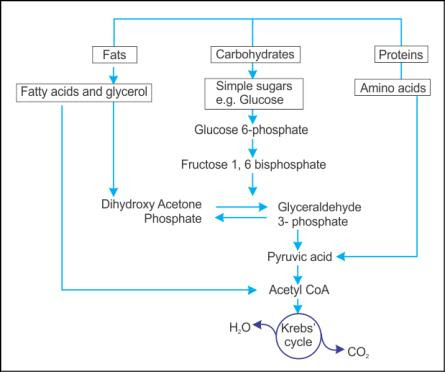 Q.20. Who gave the theory of chemiosmotic theory of oxidative phosphorylation?

Sol. The primary difference between aerobic and anaerobic respiration is the presence or absence of oxygen during the processes. More detailed differences are between the two are as follows:

Respiration is the most vital process of all living organisms. It occurs in all very living species, from a single-celled organism to dominant multicellular organisms.

Other importance of respiration are:

Q.3. What is the respiratory quotient(RQ) of protein and fats?

Sol. The respiratory quotient of fats.

Fat is the respiratory substrate during the germination of oily seeds like mustards, groundnuts, cotton, millets, etc. The molecules of fat have less oxygen in comparison to carbohydrates. Therefore, for the oxidation of fats more of the environmental oxygen is required. Therefore, the respiratory quotient of fat is always less than one.

The respiratory quotient of Proteins

Protein molecules also have less amount of oxygen in comparison to carbon like fats. In the respiration process, proteins work as respiratory substrates only in the absence of carbohydrates and fats. If humans keep fasting for a longer time without food, these proteins are used as a respiratory substrate, which is an indication of death in humans. if it continues.

Sol. The Krebs cycle is also called the citric acid cycle. It is an aerobic process that takes place in the mitochondrial matrix and involves the oxidation of pyruvic acid into water and carbon dioxide. It is a series of enzyme catalysed reactions occurring within the mitochondrial matrix, where acetyl-CoA is oxidised to form carbon dioxide and coenzymes are reduced, which generate ATP in the electron transport chain. It is a series of eight-step processes, where the acetyl group of acetyl-CoA is oxidised to form two molecules of CO2 and in the process, one ATP is produced. Reduced high energy compounds, NADH and FADH2 are also produced.

Krebs cycle was named after Hans Krebs, who postulated the detailed cycle. He was awarded the Nobel prize in 1953 for his contribution.

The importance of Kreb’s Cycle:

Q.5. Differentiate between Respiration and Combustion.

Combustion: It is a chemical process in which the fuel combines with oxygen gas to release energy in the form of heat and light. This heat can be used to produce electricity, run our cars and also for cooking.

Difference between Respiration and Combustion:

Q.6. Brief out the internal factors affecting the rate of respiration.

Sol. The protoplasm of the cell and the respiratory substance are the main internal factors which affect the rate of respiration.

There are different types of sugar present within the cell-like glucose, fructose, maltose and all these are used immediately in the respiration process. Compared to these conversions of the starch and fats into sugar is necessary before their use. Due to this reason, the process of respiration is delayed.

Age of the cell:

Rate of transpiration is high in young cells compared to that of adult and old cells.

Rate of transpiration is increased in injured and damaged tissues.

Q.7. Give the schematic representation of an overall view of Krebs’ cycle.

Sol. The Krebs cycle or Citric acid cycle is a series of enzyme catalysed reactions occurring in the mitochondrial matrix, where acetyl-CoA is oxidised to form carbon dioxide and coenzymes are reduced, which generate ATP in the electron transport chain. 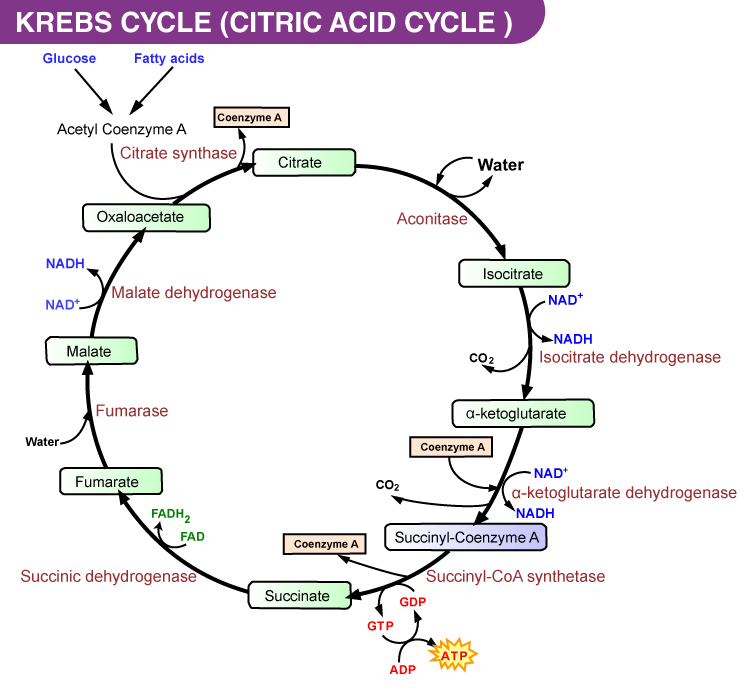 Q.8. Differentiate between Respiration and Photosynthesis.

Photosynthesis: It is a biological process utilized by all green plants to synthesize their own nutrients.

Difference between Respiration and Photosynthesis:

Q.9. Give the schematic representation of glycolysis?

Sol. Glycolysis is the process in which glucose is broken down to produce energy. It produces two molecules of pyruvate, ATP, NADH and water. The process takes place in the cytosol of the cell cytoplasm, in the presence or absence of oxygen.

The schematic representation of glycolysis 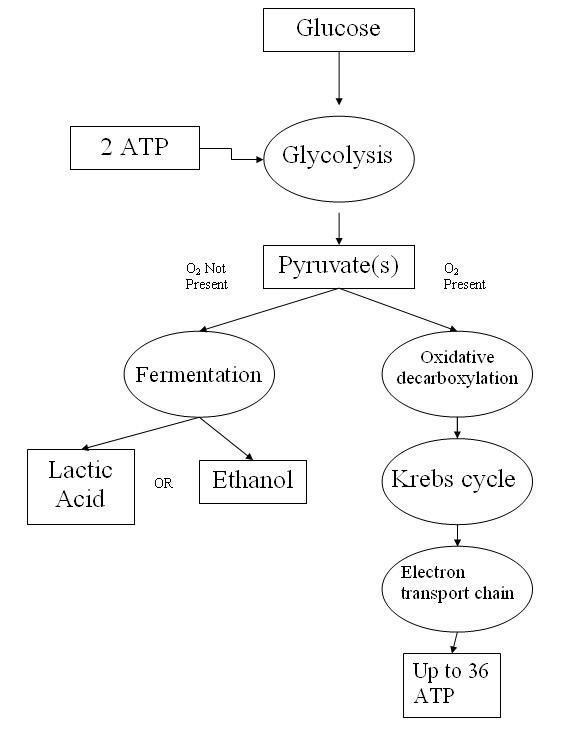 Q.10. Brief out the external factors affecting the rate of respiration.

Sol. External factors affecting the rate of respiration are:

Waterworks as a mediator for anabolic reactions in protoplasm. Water plays an important role in the transport system of plants exchange of gases and in the activation of enzymes. Lack of available water affects the process of respiration. In the presence of water, carbohydrates are converted into soluble sugar and thus increases the rate of respiration.

Q.11. Write the difference between Glycolysis and Fermentation.

Sol. Difference between Glycolysis and Fermentation:

Q.12. Write the difference between Glycolysis and Krebs Cycle.

Sol. Glycolysis – It is an anaerobic process in which a molecule of glucose is converted into two molecules of pyruvic acid. It takes place in the cytoplasm

Krebs Cycle – It is an aerobic process that takes place in the mitochondrial matrix that involves the oxidation of pyruvic acid into water and carbon dioxide.

Given below in a tabular column are the differences between glycolysis and Krebs Cycle.

Q.13. What is Glycolysis? List out the importance of Glycolysis.

Sol. Glycolysis is the process in which glucose molecules are broken down to produce energy. It produces two molecules of pyruvate, ATP, NADH and water. The process takes place in the cytosol of the cell cytoplasm, in the presence or absence of oxygen. The process of glycolysis takes place in the cytoplasm of plant and animal cells, where six enzymes are involved in the process. The end products of the glycolysis reaction include 2 pyruvate, 2 ATP and 2 NADH molecules.

The term glycolysis originated from the Greek words- glyco for sugar and lysis for splitting. The scheme of glycolysis was given by Gustav Embden, Otto Meyerhof, and J. Parnas, and is often referred to as the EMP pathway.

We, at BYJU’S, aim to deliver students with all the necessary support and allow them to prove their talent by excelling in their examination. Important Questions for RBSE Class 12 Biology Chapter- 11, Respiration are prepared under the guidance of RBSE syllabus for Class 12 with proper structure and after thorough research on the particular topics.

Stay tuned with BYJU’S for more detailed information regarding the RBSE Class 12 Biology chapter-wise Important Questions and other related topics.