RBSE Solutions for Class 12 help students to perform their best in the exams. By practising these important questions, students can analyze their preparation, get a thorough knowledge about all the important terminologies, and at the same time, it helps them assess their understanding of the material.

The Rajasthan Board Class 12 Biology Chapter 12 important questions are the best study material for both class assignments and other board examinations. By practising these important questions, students can gain deep knowledge about the topics explained in this chapter and also help them to be well prepared for their upcoming examinations.

Q.1. Which of the following is identified as a denitrifying bacterium?

Q.2. Heterocyst is a specialized cell performing nitrogen fixation in _________.

Q.4. What form of nitrogen is absorbed by plants?

Q.5. The element required for the activity of nitrogen-fixing in microbes is _________.

Q.6. Which of the following pigments is necessary for nitrogen fixation in root nodules of leguminous plants?

Q.8. Which of the following statements are true?

(a) Rhizobium, a gram-negative bacillus bacterium is found in the air.

(b) Rhizobium, a gram-negative bacillus bacterium is found in soil.

(c) Rhizobium, a gram-negative bacillus bacterium is found in water.

(d) Rhizobium, a gram-negative bacillus bacterium is found within the plant cells.

Sol: (b) Rhizobium, a gram-negative bacillus bacterium is found in soil.

Q.9. How many stages are there in the nitrogen cycle?

Sol: Leghaemoglobin is defined as reddish or pink coloured pigment present within the functional nodules of leguminous plants. These pigments function by absorbing oxygen and protect the nitrogenase enzymes against inactivation due to the presence of oxygen.

Q.4. What is Nitrogen Fixation?

Q.5. What is nitrification?

Sol: Nitrification is defined as the process of converting ammonia into nitrate compounds by the process of oxidation. This process is completed in the presence of Nitrosomonas bacteria – a genus of Gram-negative rod-shaped, group of chemotrophic bacteria.

The process of nitrification is expressed by the following chemical reactions:

Q.6. Explain why plants cannot use nitrogen directly from the atmosphere.

Sol: NIf-gene is a group of genes found in the genome of some bacteria having a significant role in the nitrogen fixation process. These genes encode enzymes involved in the fixation of atmospheric nitrogen. Nitrogenase complex is an enzyme that fixes atmospheric nitrogen and is encoded by the NIf-genes.

Q.8.What is the Nitrogen cycle?

Sol: Nitrogen cycle is a biogeochemical process by which atmospheric nitrogen is converted into chemical forms to make it available for living organisms and is returned into the atmosphere. This process is carried out through several biological and physical processes.

Sol: The process of degradation of nitrate compounds into nitrate and nitrogen gas by microbes is called denitrification. This process is brought about by Thiobacillus denitrifying bacteria present in the soil. The process is carried out during the absence of oxygen by bacterial species such as Clostridium and Pseudomonas.

Q.10.What is the importance of nitrogen?

Sol: Nitrogen is an important component of all life. It is a building block of proteins, nucleic acids and other cellular constituents which are essential for all forms of life.

Q.12. What are the types of Nitrogen Fixation?

Sol. There are three different types of nitrogen fixation.

Q.13. What is assimilation?

Sol: Ammonification is the biological process by which the organically bound nitrogen of plants biomass is recycled after their death. During the process of ammonification, the nitrogen present in the organic matter is released back into the soil. The decomposers, namely bacteria or fungi present in the soil, convert the organic matter back into ammonium. This process of decomposition produces ammonia which is further used for other biological processes.

Q.15. What is nodulin protein?

Sol: Proteolysis is the process of ammonification, which functions by converting the dissolved proteins into smaller polypeptides or amino acids.

Deamination is the process of ammonification, in which the amino acids are disintegrated by bacteria and releases the produced ammonia into the atmosphere.

Q.17. What is Nitrogen Fixation by Lightning

Sol: Nitrogen Fixation by Lightning is another process which helps in nitrogen fixation in lightning. It is a natural phenomenon where the energy of lightning breaks and converts the non-absorbable form of nitrogen into a usable form. Even though the contribution of lightning in the nitrogen fixation is small, they save plants from the deficiency of essential elements.

Q.18. What is the importance of Nitrogen?

Q.1. What is Nitrogen Fixation? Explain in detail about Abiotic nitrogen fixation.

Sol. Nitrogen is a vital element for all plants. This element plays a vital role in a variety of plant processes. It is the major component of the chlorophyll, a photosynthetic pigment, found in all green plants and other photosynthetic organisms. Since plants cannot use free atmospheric nitrogen, it depends on some microbes, which are capable of fixing atmospheric nitrogen.

Nitrogen fixation is the biological process in which the free atmospheric nitrogen is converted into a usable and observable form for plants. Plants use ammonia and other related nitrogenous compounds. 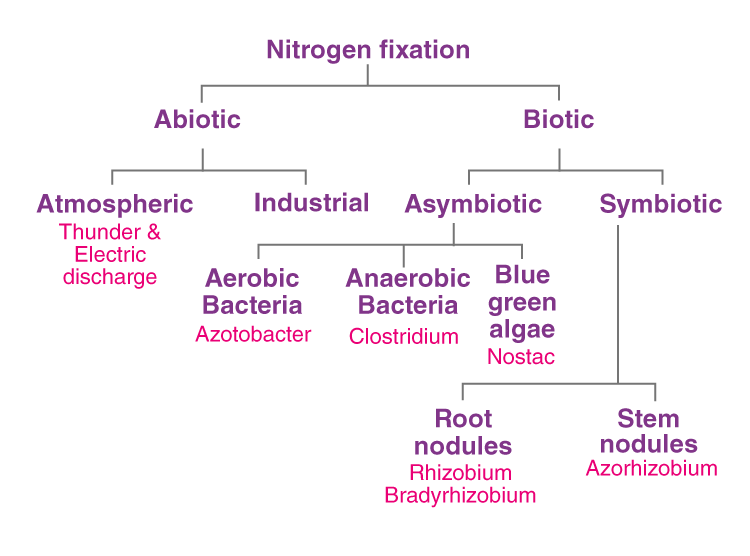 The reaction of atmospheric nitrogen fixation is as follows:

In the presence of excessive heat, pressure and catalyst, the atmospheric hydrogen and nitrogen combine together and produce ammonia, which is used to manufacture fertilizers in the industries which are later applied to the soil.

The reaction of industrial nitrogen fixation is:

Q.2. Explain the mechanism of the formation of root nodules in leguminous plants.

Sol: The mechanism of the formation of root nodules in leguminous plants are explained in the following points:

Q.3. What are the two main proteins used in symbiotic nitrogen fixation?

Q.4.Brief out the mechanism of bacterial infection and nodulation.

Sol: Rhizobium is a gram-negative, rod-shaped bacterium, which is found in the soil. The bacterium accumulates near the roots of the specific leguminous plant and induces nodule formation. The establishment of the symbiotic relationship between the root and Rhizobium is a complex process.

The formation of nodules is completed by the following steps:

The roots of the leguminous plant secrete glycoprotein – lectin, which functions by attracting the Rhizobium towards the roots.

With the help of plant hormones- auxin and cytokinins secreted by the roots, the Nod factor and root hairs change its shape to the hook-like structure.

The cell wall present near to the hook-shaped root hairs are damaged and through this damaged cell wall, bacteria enter the root hair along with mucilaginous substances. These bacteria, which have entered the root hair are called bacteroids.

As the infection penetrates into the cortex cells, the total amount of the DNA present in the nucleus of the outer cortex cells increases due to the induced polyploidy within the cells of the cortex.

These polyploid cells produce nodules by the repeated cell division. Later, the size of the nodules increases by the impact of IAA – Induced Acetic Acid, a naturally occurring plant hormone, which is secreted by the bacterial cells.

Q.5.Explain the process of Nitrification, Denitrification and Ammonification.

It is the process of converting ammonia into nitrate compounds by the process of oxidation. This process is completed in the presence of Nitrosomonas bacteria – a genus of Gram-negative rod-shaped, group of chemotrophic bacteria.

This process is brought by different types of chemotrophic bacteria and is completed in two steps:

The first step is the conversion of Ammonia (NH3) into Nitrate. In this process, the Ammonia is first oxidized to nitrate by Nitrosomonas bacteria.

The second step is the conversion of nitrite into nitrate.

The process of degradation of nitrate compounds into nitrate and nitrogen gas by microbes is called denitrification. This process is brought about by Thiobacillus denitrifying bacteria present in the soil and is carried out during the absence of oxygen by bacterial species such as Clostridium and Pseudomonas.

Q.6. Brief out the mechanism of Symbiotic Nitrogen fixation.

Q.7. Brief out the different stages of Nitrogen Fixation.

Sol: The nitrogen cycle is completed in four stages:

Ammonification is the biological process of the formation of ammonium compounds from the disintegration of matter present in the soil. This process begins by absorbing inorganic nitrogen from plants and transferring it into organic matter by the process of assimilation. After the death and decay of plants, these organic matter is re-disintegrated by the microbes and released as inorganic nitrogen into the atmosphere in the form of gaseous. This action takes place by proteolysis and deamination process, which are completed by different types of active purifying bacteria present in the soil.

Oxidation of ammonia into nitrates is called nitrification. This reaction is completed by various types of chemotrophic bacteria.

Here is the chemical equation of the nitrification process.

The conversion of nitrate into nitrogen in the soil by different types of bacteria is called denitrification. This is the final stage of the nitrogen fixation.

Q.9. Brief out the process of Biotic nitrogen fixation.

There are two types of biological nitrogen fixation: We, at BYJU’S, aim to deliver students with all the necessary support and allow them to prove their talent by performing best in their examination. Important Questions for RBSE Class 12 Biology Chapter- 12 – Nitrogen Metabolism and Nitrogen Cycle are prepared under the guidance of RBSE syllabus for Class 12, with proper structure and after thorough research on the particular topics.

Stay tuned with BYJU’S for more detailed information regarding the RBSE Class 12 Biology chapter-wise Important Questions and other related topics.