RBSE Class 12 Biology Chapter 2- Male and Female Gametophyte Structure and Development provide complete information related to the structure and development of male and female gametophyte. It also includes a detailed explanation of stamen, pollen grains, the structure of pollen grains, microsporogenesis, megasporogenesis, the formation of male and female gametes, structure, functions and types of the ovule. These important questions help students to perform best in their exams. By practising these important questions, students can analyse their preparation.

The Rajasthan Board Class 12 Biology Chapter 2 important questions is the best study material for revisions and last-minute preparations. By practising these important questions, students can gain in-depth knowledge about the topic and also help students by providing a strategy to prepare for various board examinations and also for medical exams.

Q.1.Which of the following statements are true?

(d)Formation of male and female gametes is called Gametogenesis.

Sol: (d)Formation of male and female gametes is called Gametogenesis.

Q.4.How many cells does a matured pollen grain contain?

Q.5. Based on their shapes, ovules have been separated into______categories.

Q.8. How many types of microspore tetrads are there?

Q.9. Which of the following is the innermost layer of the anther?

Q.10. Which of the following statements are true?

(a)25 meiotic cell divisions are required to form 100 pollen grains.

(b)50 meiotic cell divisions are required to form 100 pollen grains.

Q.13. How many male gametes are formed from a pollen grain in angiosperms?

Q.15. How many cells and nuclei do a mature polygonum type of embryo have?

Q.16.Which of the following is the function of Tapetum – the innermost layer of the anther?

Q.17.Which of the following plant structures develops into a seed when fertilized.

Q.18.Which of the following represents female gametophyte in angiosperms?

Q.20. Which of the following are called as the first cell of the male gametophyte?

Sol. A sticky, oily and yellow coloured layer present on the exine or outermost layer of the pollen grain is called the pollen kit.It is also called a pollen coat and is made up of lipids and carotenoids, which is secreted by tapetum. Pollen kits are especially found in those plants where the process of pollination is distributed by insects. Pollen kits are present in rose, sunflower, lotus, etc.

Sol: Microsporangium is a structure in the plant’s male reproductive organ where the development of the pollen takes place. The structure of the microsporangium appears to have a circular outline and is surrounded by four layers:

Q.4.What is the egg apparatus?

Sol. The apparatus, which is located at the end of the embryo sac closer to the micropyle in the seed-bearing plant, is called the egg apparatus. This apparatus consists of an egg and two sterile cells. Hence the name is referred to as egg apparatus.

Q.5. What is anther dehiscence?

Sol: The process of bursting the walls of the wholly matured pollen is termed as anther dehiscence. This process occurs in four different methods:

Q.6. Explain the structure of a mature embryo sac, along with a neat labelled diagram.

Sol: The embryo sac is the female gametophyte of an angiosperm. It is an oval-shaped structure present in the ovule of flowering plants. 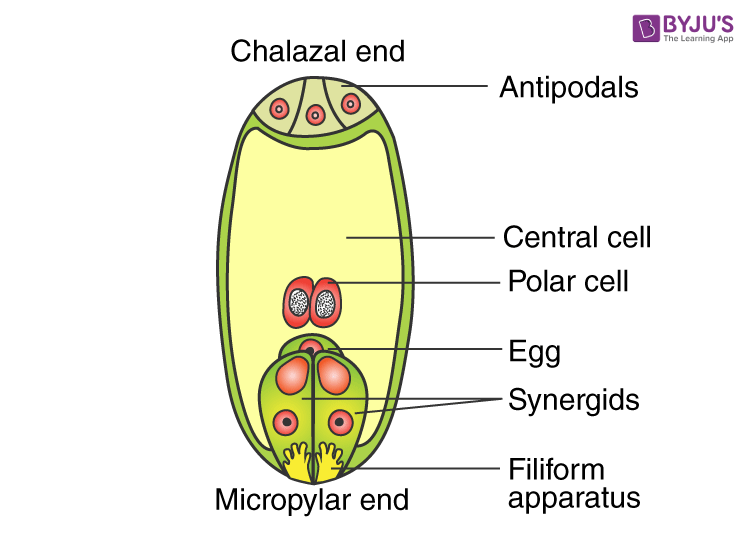 The features of a typical mature embryo sac of Angiosperms is

Q.7. What is the difference between pollen and pollen grain?

Sol: A pollen is defined as the mass of microspores in a male gametophyte of seed plants. It can be all pollen or single pollen grain. A pollen grain is usually defined as a unique structure composed of two cells.

Q.8. Explain how a secondary nucleus is formed?

Sol: The tapetum is the specialised nutritive layer of cells that lines the inner wall of the pollen sac. There are two different types of tapetum and are differentiated on the basis of its behaviour.

Periplasmodial Tapetum: It is also called Amoeboid or Invasive Tapetum. These types are seen in water-plantains, lily, Alisma, Typha, etc.

Secretory Tapetum: It is also called GlandularTapetum. It is the most common type of tapetum in angiosperms.

Sol: Pollen is defined as the male gametophyte of gymnosperms and angiosperms. Its size ranges from 15 to 200 μm and is generally oval or spherical in shape.

Sol: A leaf-like structure, produced by heterosporous plants such as seed plants, lycophytes, and some ferns are called megasporophyll. In all seed-bearing plants, megasporophyll functions by producing megasporangia, which produce megaspores of female spores.

Q.14.How is a gametophyte different from sporophyte?

Campylotropous ovule— The body of ovule is curved and bent around so that the micropyle and chalaza do not lie in the same straight line. For example, Leguminosae.

Anatropous ovule — The body of the ovule gets completely inverted during the developmental process, such that the micropyle lies very close to hilum—for example, gamopetalae members.

Q.16. Draw the structure of the mature ovule of angiosperms.

Sol: Structure of the mature ovule of angiosperms 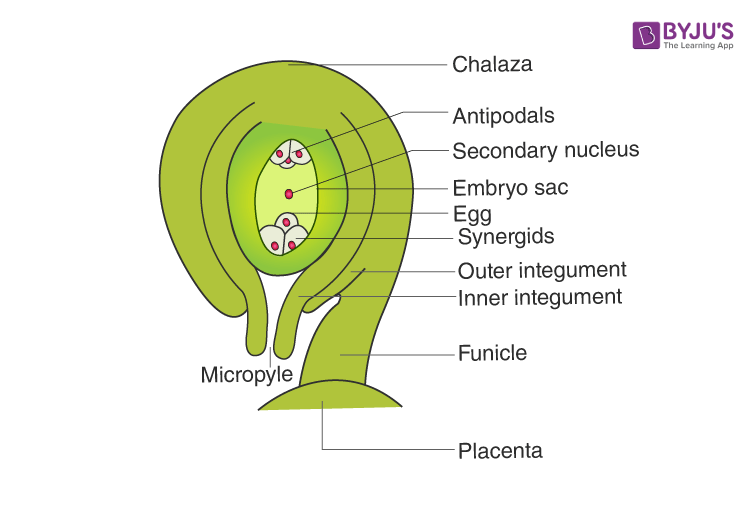 Sol: Microsporogenesis is a process, which involves the formation of microspores inside the pollen sacs of seed plants from microspore mother cells by meiotic division. This process gives rise to our haploid nuclei.

Q.18.Give the difference between Pollen grain and Ovule.

Sol. The ovule is the female reproductive structure of a flower. A type of ovule, where the nucellus and the axis are in the same line in the beginning. Later due to the rapid growth on one side, the ovule becomes anatropous. This forms a circinotropous ovule. Opuntia is an example of a Circinotropous ovule.

Q.20.Explain the different types of ovules.

Sol: Flower is a reproductive organ of all angiosperms. It is a modified shoot and bears four main parts, which are arranged in whorls. The four different types of whorls and their members are as follows:

Q.1.What is Gametophyte? Explain in detail about the male and female gametophytes.

Structure of a Gametophyte There are two different types of gametophytes:

Q.2.Describe the structures involved in the process of gametogenesis. The formation of Embryo sac occurs in two stages:

The first stage of the Embryo formation is called the megasporogenesis.

In this phase, the single diploid mother cell undergoes meiosis and forms haploid megaspore tetrad out of which only one will survive and other three disintegrate. The functional megaspore grows into an embryo sac.

The second stage of the Embryo formation is called the megagametogenesis.

In this stage, the embryo sac is formed due to mitosis of the functional haploid megaspore to produce 8-nucleate, 7-celled gametophyte. Later the polar nuclei move to the centre out of all the eight nuclei and combine to generate a single diploid cell at that location. This single diploid cell then fuses with the sperm to generate the triploid endosperm. The other three nuclei grow into antipodal cells while two modify into synergid cells, which degenerate gradually

Q.6. Explain the structure of a mature pollen grain, along with a neat labelled diagram. Pollen grains represent the male gametophyte. The detailed structure of a pollen grain is mentioned below:

Sol: Male gametophytes are also called pollen grains. It is the first gametophytic structure to be formed with the modification of a microspore mother cell into the pollen grain.

Q.9. What is pollen sac? Draw a neat labelled diagram of a pollen sac.

Sol: The pouch-like structures present in seed plants where pollen is produced. These pollen sacs are present within the anther and are found both in angiosperms and gymnosperms and differ in their numbers. In angiosperms, there are around four to five pollen sacs and contain the micro spore mother cells. In gymnosperms, there are variable numbers of pollen sacs that are borne on the micro sporophylls, which make up the male cone. Q.10. What is Ovule? Explain the different types of Ovules with a neat labelled diagram. 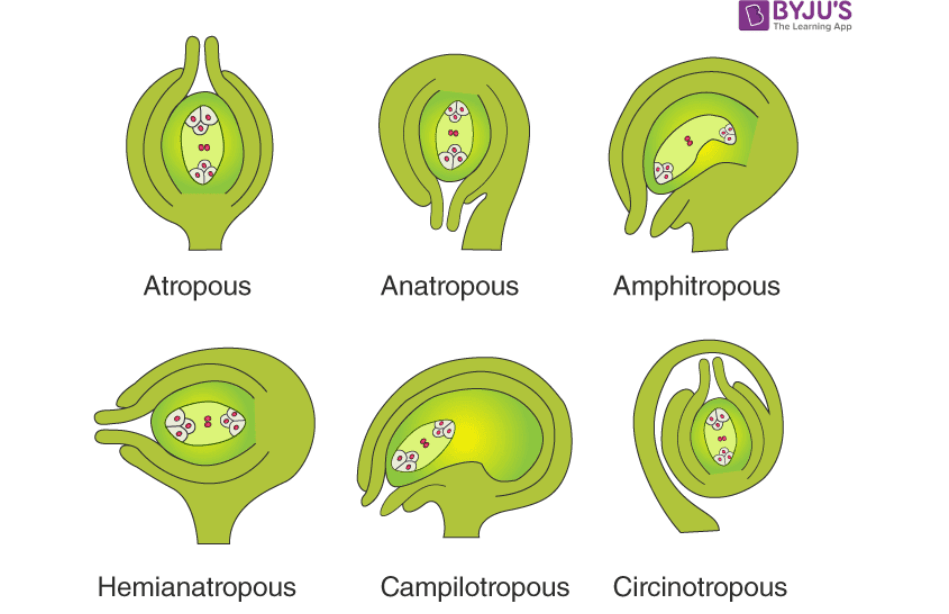 We, at BYJU’S, aim to deliver students with all the necessary support and allow them to prove their talent by performing well in their examination. Important Questions for RBSE Class 12 Biology Chapter 2-Male and Female Gametophyte-Structure and Development are prepared by a team of subject experts under the guidance of RBSE syllabus for Class 12

Stay tuned with BYJU’S for more detailed information regarding the RBSE Class 12 Biology Chapter 2 Important Questions and other related topics.