Q.1. In which process the polar body is formed?

Q.2. How many ova are produced from one primary oocyte?

Q.6. How long does sperm last inside a woman vagina?

Q.8. Which of the following is immortal?

(d) Formation of the polar body

Q.1.Which cell do organelles participate in the formation of the middle part of the sperm?

Sol: Mitochondria and the centrosomes are the two main cell organelles involved in the formation of the middle part of the sperm.

Q.2.Which part of the sperm comes in contact with the egg at the time of fertilization?

Sol: Acrosome is the apical part of the sperm’s head, which comes in contact with the egg at the time of fertilization.

Q.3. What kind of eggs are found in the placental mammals?

Sol: Alecithal is a type of egg found in the placental mammals.

Q.4. What are spermatids?

Sol: Spermatids are the group of cells formed as a result of the second maturation division during the process of spermatogenesis, which gives rise to four spermatids.

Q.5. Where is the Barr body found?

Sol: The Barr body, also called the sex chromatin are found within the nucleus of every somatic cell in females.

Q.6. Why are sperms produced in quantity in comparison to eggs?

Q.7. Which hormone is found on the surface of an egg?

Sol: Gynogamone and Fertilizin are the two main hormones found on the surface of an egg.

Sol: A zygote is a fertilized ovum. The germ cells undergo meiosis to reach a haploid state(n) as part of spermatogenesis and oogenesis. The sperm and the unfertilized ovum reinstates a chromosome set in zygote in a diploid state(2n).

Sol: Oogenesis is the process of formation of female gametes. It is the type of gametogenesis through which ova or the female gametes are formed, and this female gamete is known as an ovum.

Sol: Germ cells are a central component of sexual reproduction in all sexual reproducing living organisms. The germ cells differentiate to produce male and female gametes, sperm and unfertilized eggs and undergo meiosis to produce a haploid set of chromosomes. These cells are immortal cells

Sol: The inactive X chromosome in the female somatic cells is known as a Barr body. These Barr bodies are not involved in sexual reproduction. The Barr bodies are also sometimes called the sex chromatin.

Q.12. What is Gametogenesis?

Q.13. What is spermatogenesis?

Sol: Spermatogenesis is a process of developing male gametes, known as sperm within the male reproductive organs, the testes. During the process of spermatogenesis, four spermatids are produced which are functional and that later develops into spermatozoa.

Q.14.What is an Ovulatory phase?

Sol: It is the phase of the menstrual cycle. It is the mid-cycle phase, in which ovulation takes place, which begins after day 12 and in between the day 13 to day 17. The end of the follicular phase along with the ovulation period defines the fertilization period.

Sol: Luteal phase is the post-ovulation phase of the menstrual cycle. In this phase, the fate of corpus luteum is decided. If fertilization occurs, pregnancy starts. If fertilization doesn’t occur, it marks the onset of another cycle.

Q.17. How is a primary oocyte different from a secondary oocyte?

Q.18. What are the stages of Oogenesis?

Sol: The process of oogenesis has three stages. They are as follows:

Sol: Menopause is when the menstruation cycle comes to a halt, indicating the end of the fertile period as the process of ovulation stops.

Q.20. What is fertilization?

Sol: Fertilization is the biological process of fusion of both male and female gametes resulting in the formation of a zygote. In humans, the fertilization process takes place in the fallopian tube.

Q.1. What is the difference between oogenesis and spermatogenesis?

The differences between the oogenesis and spermatogenesis are: 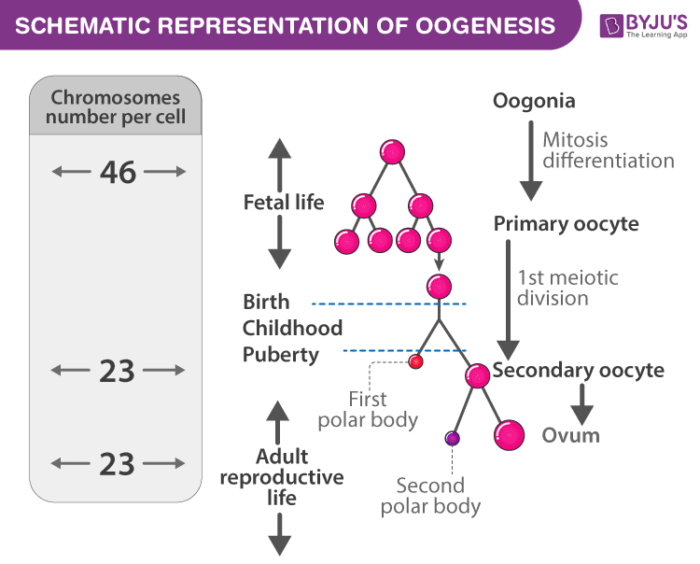 Q.3. Explain the process of spermatogenesis.

Sol: The process of spermatogenesis in the male reproductive system takes place in four different stages:

The Diploid spermatogonia are situated in the seminiferous tubules which include twice the total number of chromosomes. This replicates mitotically in interphase before the method of meiosis 1 to create 46 pairs of sister chromatids.

In this, the chromatids allow the exchange of genetic information through the synapsis process. It is done before dividing into haploid spermatocytes through meiosis.

In this division, the new two daughter cells will further divide into 4 spermatids, having unique chromosomes that are approximately half in number to the original spermatogonium.

Q.4. What is Oogenesis? Draw a neat labelled diagram showing the process of Oogenesis.

Sol: Oogenesis is the process of formation of female gametes. This process begins inside the fetus before birth. The steps in oogenesis up to the production of primary oocytes occur before birth. Primary oocytes do not divide further. They either become secondary oocytes or degenerate. Oogenesis occurs in the outermost layers of the ovaries. Oogenesis starts with a germ cell called oogonium and undergoes mitosis to increase in number.

The process of Oogenesis. 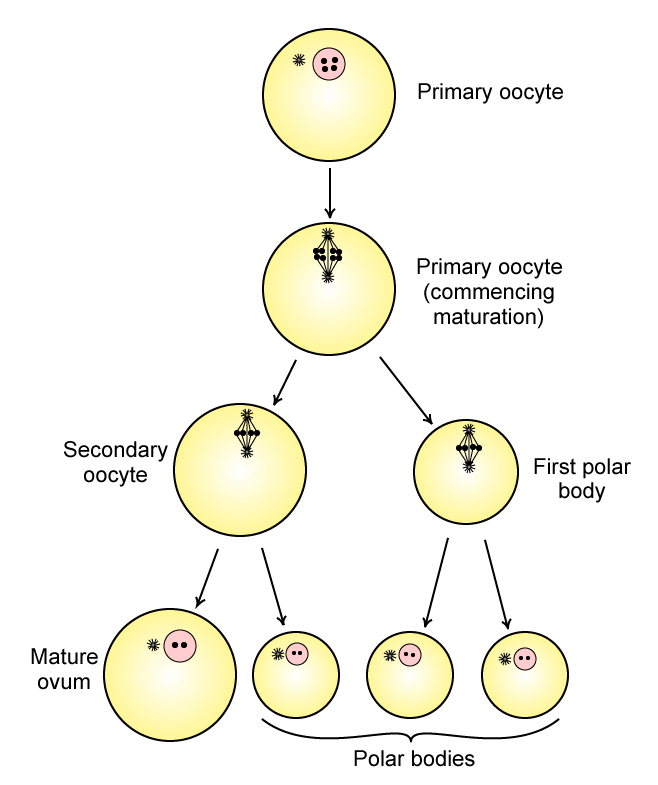 The male gamete is called a spermatozoon or a sperm. It is a single cell structure and it bears a haploid set of chromosomes within the nucleus.

It is the anterior part of the sperm, whose shape varies from species to species. The anterior part of the head is occupied by the acrosome, which is formed by the Golgi body and it is bounded by a unit membrane. It comprises sperm lysins and is involved in the process of fertilization. There is a nucleus just behind the acrosome, which is slightly elongated and its posterior end has a notch.

The nucleus has a haploid set of chromosomes, which consists of protamines in addition to the DNA. The sperms of some species have a vacuole -like structure between the acrosome and the nucleus, which is called the perforator.

The posterior position of the nucleus protects the proximal centriole, which is to be contributed to the egg at the time of fertilization.

It helps at the beginning of the first cleavage.

It is a small part, which connects the head to the mid-piece. It comprises a distal centriole, which remains at 90° to the proximal centriole. This distal centriole produces an axial filament that extends throughout the length of midpiece and the tail. It exhibits a fibrilar arrangement of 9 doublets + 2 singlets.

In the middle piece, the axial filament is surrounded by a sheath called manchette. The manchette is made up of a nebenkern and the little condensed cytoplasm. In the sperm of some species, the posterior end of the middle place may have a ring called centriole.

In the tail, the axial filaments are covered by a sheath, which is composed of 9 singlet fibres. This sheath is absent around the terminal end of the tail. The whole sperm is bounded by a plasmalemma. Most of the sperms are mono-flagellated. 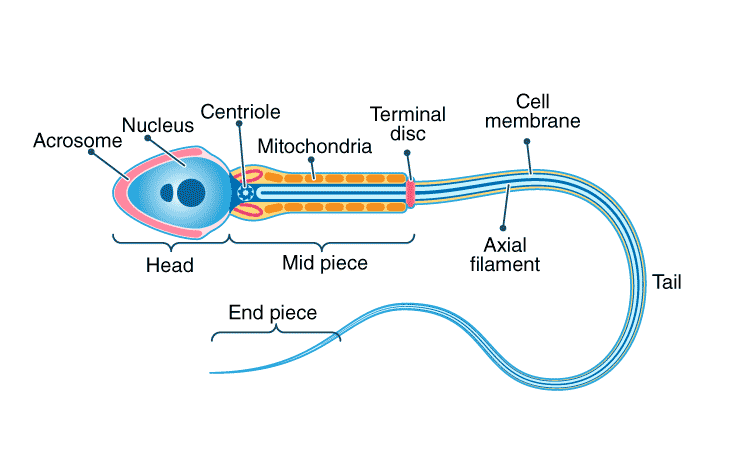 Q.6. Describe the formation of Acrosome.

Sol: Acrosome is the apical part of the sperm’s head, which comes in contact with the egg at the time of fertilization.

The anteriormost part of the sperm is called an acrosome. It is formed by the Golgi body during the process of spermiogenesis.

At first, one of the vacuoles of the Golgi body develops an acrosomal granule, which gradually accumulates lytic enzymes and forms a cap-like structure on the anterior end of the nucleus.

Later, this cap-like structure gets bound by a single unit of the plasma membrane and forms an acrosome.

The remaining parts of the Golgi body are lost in the form of Golgi, rest along with some cytoplasm.

Q.8. Write a brief note on the three stages of gametogenesis.

The phase in which the diploid germ cell divides by mitosis and forms diploid oogonia in oogenesis and spermatogonia in spermatogenesis.

This phase involves only the growth in size. It is the longest phase and results in the formation of the primary oocyte in oogenesis and primary spermatocyte in spermatogenesis.

This phase involves meiosis division and it is divided into two phases:

In this phase, the spermatocyte or diploid primary oocyte is divided by meiosis-I and haploid secondary spermatocytes are produced in spermatogenesis. In oogenesis, one secondary oocyte and one polar body is formed.

Q.9. Explain the process of oogenesis.

In this stage, the primary oocyte grows while being arrested in meiosis-I. The follicular cells proliferate and form a stratified cuboidal epithelium. Such cells are known as granulosa cells. These cells secrete glycoproteins to form zona pellucida around the primary oocyte.

Sol: Spermatogenesis is a process of developing male gametes, known as sperm within the male reproductive organs, the testes. During the process of spermatogenesis, four spermatids are produced which are functional and that later develops into spermatozoa.

Process of Spermatogenesis in the male reproductive system 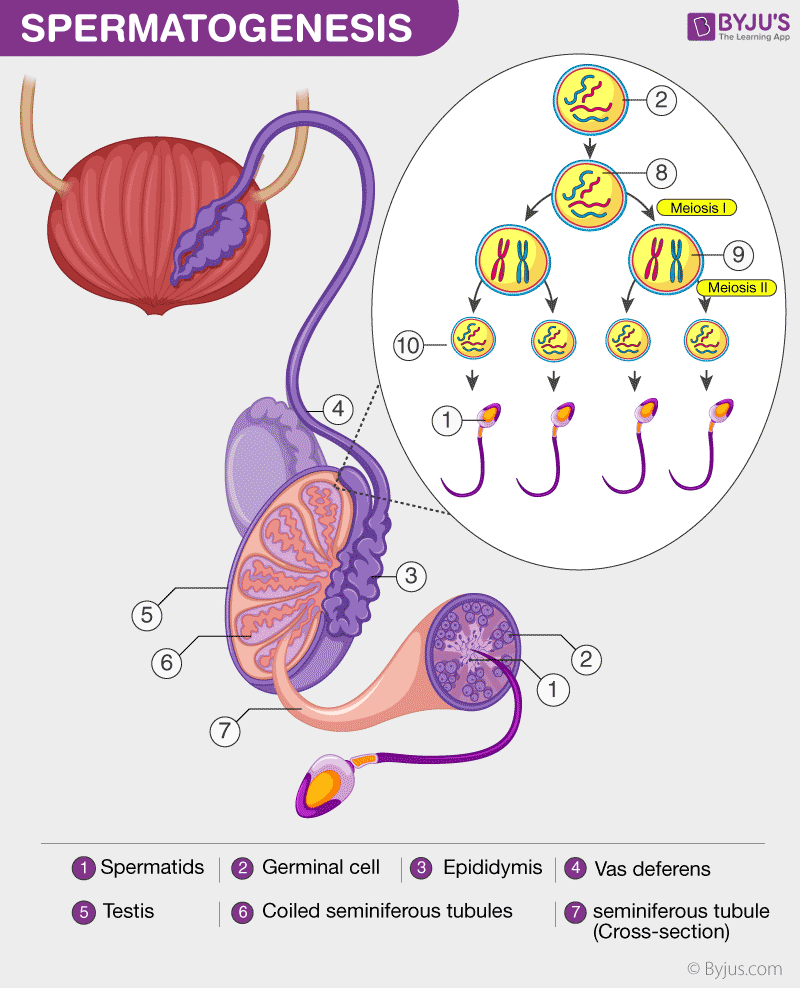 We, at BYJU’S, aim to deliver students with all the necessary support and allow them to prove their abilities by excelling in their examination. Important Questions for RBSE Class 12 Biology Chapter-31- Gametogenesis in Human, are prepared under the guidance of RBSE syllabus for Class 12 with proper structure and after thorough research on the particular topics.