The Rajasthan Board Class 12 Solutions are the best study material for both class assignments and other board examinations. By practising these important questions, students can gain deep knowledge about the topics explained in this chapter and also help students to be well prepared for their upcoming examinations.

Q.1. Which tissue is responsible for the upward movement of water during the ascent of sap in plants?

Q.3.Which of the following parts of roots absorbs water?

Q.4. Who presented the Cohesion tension of water and transpiration pull?

Q.7. In which of the following processes the metabolic energy is not consumed?

Q.8.Which is the most resistant way for water absorbed in plants to reach the xylem?

Q.9.Which of the following are not the factors that affect the rate of water absorption?

(d) The concentration of soil solution.

Q.10. Which of the following processes is independent of transpiration?

Q.11. Who presented the theory of active absorption of water in plants?

Q.13. Which of the following plant factors affect the rate of water absorption?

(d)All of the above.

Q.16. The optimum temperature at which maximum absorption can take place ranges between __________.

Q.17.Which of the following is a rapid type of absorption of water?

Q.18. Which of the following processes occurs in the absence of roots?

Q.19. The rate of the pathway of water in plants

(c) Both the apoplastic and symplastic pathways are equal.

Q.20. Which of the following statements is true?

(a) The higher rate of transpiration the rate of water absorption decreases.

(d)The rate of transpiration and the rate of water absorption will also be the same.

Sol. Water absorption in plants can be defined as the total amount of required force for the passive absorption generated by the transpiration from the aerial parts of the plants. This is completely a physical process, in which the plant’s metabolic energy is not consumed.

Q.2.What is the Ascent of sap?

Q.3. Define the pathway of water in plants.

Q.4. What is the Symplast Pathway?

Sol: The pathways of ion and water created by symplast are known as the symplastic pathway. In this pathway, the water is transmitted from one cell to another cell through plasmodesmata. This pathway offers resistance to the flow of water since the selective plasma membrane of the root cells handles the intake of ion and water.

Q.5. Which part of the root performs the process of absorption of water.

Sol: The young parts of the root are involved in the process of absorption of water. These parts include:

Q.7.What are the factors that affect water absorption?

Sol: Root hairs are the large number of elongated, microscopic cells developed from the outermost layer of the cells in roots. They are the central part from which small and lateral roots develop.

Q.9. What are the different pathways of the lateral flow of water?

Sol: The three different pathways of the lateral flow of water are

Q.10. What is capillary water?

Sol: The water that remains within the soil as a continuous film around the soil particles and its interspaces, which are held by the capillary force is called capillary water.

Sol: The transpiration pull and cohesion of water theory were first proposed by Dixon and Joly in the year 1894. These were also supported by Clark and Curtis

Q.12.What is active absorption of water?

Sol: In the apoplast pathway, water is transported from root hair to xylem through the nonliving cell wall of intercellular spaces present in the cells. In this pathway, the flow of water is uncontrolled and is caused through the diffusion.

Q.14.How is water transported in plants?

Sol: Water is transported in the plants with the help of conductive tissues and individual cells of the vascular system. Water moves along the water potential gradient and enters the root hairs and xylem through either apoplast or symplast pathways. This is how the water is carried from the roots to the stem and other parts of the plant.

Sol: The suction force used to draw the water in an upward direction from the roots to the leaves. The amount of water received by the leaves is used for photosynthesis and the excess amount of water is released into the atmosphere in the form of vapours through the openings in the leaves known as stomata. This pulling force is called a transpiration pull.

Q.18.What is passive absorption of water?

Sol: Apoplast is the system of adjacent, continuous cell walls. It refers to the space outside the plasma membrane within which the molecules can freely diffuse. It is mainly involved in the transportation of ion and water through the apoplastic pathway in the cortex.

Sol: Root cap is the terminal part of the root, which are involved in the following functions:

Q.1.Write the differences between active and passive water absorption?

Q.2. What is transpiration pull theory for the ascent of sap.

Sol: Cohesion and Transpiration Pull Theory was first proposed by Dixon and Joly in the year 1894. This theory was proposed based on the following features:

(i) Cohesion and Adhesion:

Cohesion is the mutual attraction between water molecules. The walls of tracheids and vessels of xylem are made-up of lignin and cellulose and have a strong affinity for water (adhesion).

(ii) Tension: Transpiration pull develops a negative pressure or tension in xylem sap which is transmitted down to the root.

Q.3. Explain how the soil aeration and soil temperature affects the rate of water absorption.

Sol: There are many other factors, which are involved in the rate of water absorption. 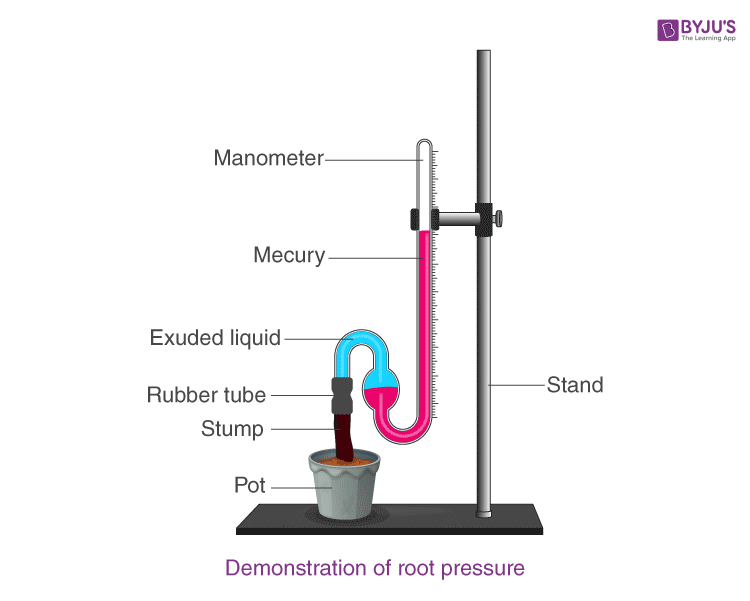 Root pressure theory was put forward by Joseph Priestley in 1916. According to this theory, root pressure is a positive pressure that develops in the xylem sap of the root of some plants.

Root pressure can be demonstrated and measured with the help of a manometer.

The value of root pressure in plants is upto 2.0atm and the water rises upto 20.0meter height by 2.00atm. The theory was put forward by Priestley (1916).

Set up the apparatus as shown in the above diagram.

The rise in the level of coloured water in the glass tubing is due to pumping of sap by root The phenomenon is called root pressure. The same is read directly by the manometer.

Q.5. Write an account of the mechanism of absorption of water by plants.

Sol: The mechanism of water absorption was first proposed by Kramer in the year 1959. In this theory, he explained how water enters the root hair. The absorption of water in plants occurs in two independent processes.

This is the main method of absorption of water in plants. In this method, around 96-98 percent of water is absorbed by plants. During passive absorption , the factors of absorption operate in the transpiring surface of the plant. The loss of water from the leaves results in the shortage of water, which results in a tension in the water column present in the xylem vessels of the leaf. This pull is transmitted to the water column of the stem and finally to the roots. This tension is negative and is called the suction force of transpiration pull.

Sol: Active absorption of water takes place where the availability of the soil water is high and the rate of transpiration is very low.

Sol: The three major pathways of water movement are:

In this pathway, water moves from root hair to xylem through the intervening cell walls without crossing any cell membranes. The Apoplast pathway provides the least resistance to movement of water and is interrupted by the presence of impermeable ligno suberin casparian strips in the walls of endodermal cells.

In this pathway, water moves from cell to cell through their protoplasm and does not enter cell vacuoles. The cytoplasm of the adjacent cells are connected through the bridges called plasmodesmata. For entering into the symplast, water has to pass through the cell membrane at least at one place. It is also called the trans-membrane pathway.

In this pathway, individual root cells function as tiny osmotic systems and absorb water from soil through the process of osmosis. The movement of water molecules in the vacuolar pathway begins from the cell wall and finally reaches the central vacuole passing via the plasma-lemma, cytoplasm, and tonoplast. From the root hair- eel, water passes into vacuoles through osmosis. The process is continued till the total amount of water enters the xylem parenchyma cells.

Q.8. Give the differences between Apoplast and Symplast.

Sol: Differences between Apoplast and Symplast are:

Q.9. What is the pathway of water in plants? Draw a neat labelled diagram of lateral movement in plants.

Sol: After the entry of water into the plants from the root hairs, it move to the xylem vessels within the roots, mainly by three pathways:

The flow of water from the root hairs to the xylem vessels is called the lateral flow. 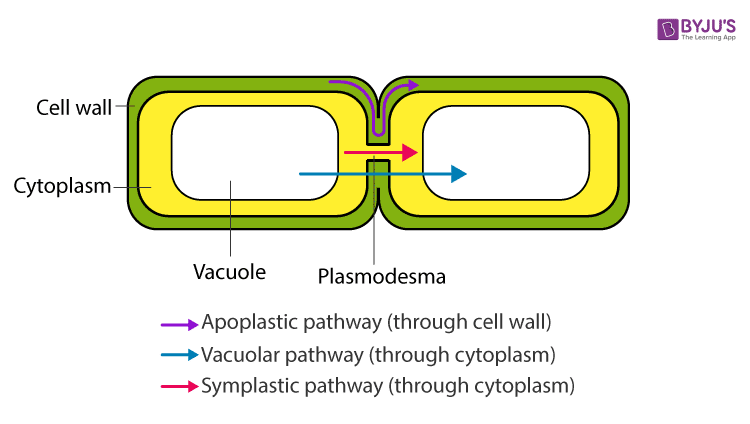 Q.10. Explain in detail about the water absorbing organs in plants?

Sol: There are no special organs in plants for water absorption. In lower plants, like mosses, liverworts and other nonvascular plants, the osmosis process is involved in the absorption of water from roots to other parts of the plant.

The higher plants have a well developed root system, which functions in the absorption of water.

Young region: The absorption of water occurs in this young region of the roots. It is divided into four regions based on their functions.

We, at BYJU’S, aim to deliver students with all the necessary support and help them to prove their talent by performing best in their examination. Important Questions for RBSE Class 12 Biology Chapter-6, water absorption and ascent of sap in plants are prepared under the guidance of RBSE syllabus for Class 12 with proper structure and after thorough research on the particular topics.

Stay tuned with BYJU’S for more detailed information regarding the RBSE Class 12 Biology Chapter 6 Important Questions and other related topics.