The answers are provided for all the questions of Chapter 12 Physics of RBSE Class 12. Students can go through these questions to understand the concepts better and score well in the board examination and entrance examinations for various professional courses. These solutions are provided by the team of experts and offer the best and accurate solutions to the questions. Do check BYJU’S RBSE Class 12 solutions page to get the answers for textbook questions of all subjects.

Q1: To show the phenomenon of interference, we need two sources which emit radiation:

Q2: In Young’s double slit experiment monochromatic light source is used. The shape of the fringes on the screen will be:

Q3: In an Interference experiment on using light of wavelength 700 nm, third bright fringe received at a point on the screen. At the same point, to receive fifth bright fringe the wavelength of light is:

Q4: In Young’s Double Slit experiment, if the ratio of the widths of slits are 4:9, then the ratio of maximum and minimum frequencies will be:

Q1: The line perpendicular to a wavefront gives the direction of which quantity?

Answer: It gives the direction of the ray.

Q2: Which physical quantities affect the width of Young’s fringes?

Answer: The physical quantities like wavelength, the distance of slit from the screen and the distance between the slits.

Answer: The diffraction is the result of the superposition of secondary waves starting from the different points of the same wavefront.

Q4: What type of wavefront emerges from

(i) Spherical wavefront emerges from a point source

Q5: Which is the most important condition for the interference of two waves?

Answer: The most important condition for the interference of two waves is that both sources of light should be coherent.

Q6: How does the angular separation between fringes change in a single slit diffraction experiment when the distance between the slit and screen doubled?

Answer: The relation between angular separation and changes in slit separation is given by

θ∝1/D, from the equation we understand that when the value of D is doubled then the angular separation between the fringes decreases by half

Q7: For clear diffraction of waves what should be the range of size of obstacle or hole?

Answer: The size of the obstacle is of the order of wavelength.

Q8: Write the expression of two physical events which proves the wave nature of light?

Answer: Interference and polarisation proves the wave nature of light

Q9: Why does light seem to propagate in a straight line although it is of wave nature?

Answer: That is because the wavelength of light is very small.

Q10: In an experiment for diffraction through a hole, which light waves superimpose?

Q11: Write down the mathematical form of Malus law? 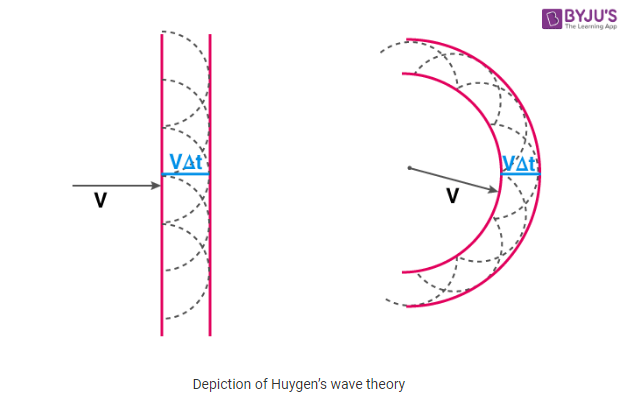 Huygen’s Principle can be explained using the given formula.

s is the distance,v is the speed and t is the time

From the equation, we can understand that the wavefront emits waves with the speed equal to v. The wavelets emitted are semicircular in shape and it occurs after a time t. The new wavefront is the tangent to the wavelets.

Interference of light is the phenomenon of modification in the intensity of light due to the superposition of two or more waves. When light waves from two or more coherent sources superpose, the distribution of energy will not be uniform. At some points, two crests or two troughs superimpose which increases the amplitude to a maximum resulting in maximum intensity. This type of interference is called constructive interference. At certain points, a crest and a trough superpose and the amplitude decreases to the minimum or zero resulting in minimum or zero intensity. This type of interference is called destructive interference.

Q3: What do you mean by coherent sources?

Two sources are said to be coherent if the waves emitted from them have the same frequency and a constant phase difference. Laser light is an example of coherent light.

Diffraction is the slight bending of light as it passes around the corners of the obstacle or through the slit into the region of the geometric shadow of the obstacle.

Q5: Define resolving power of a microscope. How is it affected

Resolving power is defined as the inverse of the distance or angular separation between two objects which can be just resolved when viewed through the optical instrument.

For microscopes, the resolving power is the inverse of the distance between two objects that can be just resolved. This is given by the famous Abbe’s criterion given by Ernst Abbe in 1873 as

Where n is the refractive index of the medium separating object and aperture. Note that to achieve high-resolution n sin θ must be large. This is known as the Numerical aperture.

Q6: Fringes are formed on screen due to interference of light from two thin slits. If the distance between slits rises four times and the distance of the screen from slits is halved then how many times will be the fringe width?

Answer: The fringe width is given by the expression

Q7: Explain the construction of polaroid.

Answer: Polaroids are a large-sized film kept between two glass plates. The film is prepared by taking very small sized crystals of quinine or sulphate and setting them on a sheet of Nitro-cellulose such that the optic axis remains parallel to each other. These crystals absorb one of the two refracted rays and the second plane polarised ray has emerged. Every polaroid has a characteristic direction known as ”Polarisation Direction”.

When a beam of light passes through the polaroid, the vibrations parallel to the polarising direction emerge and all other vibrations are absorbed. The emerging ray is plane-polarized. 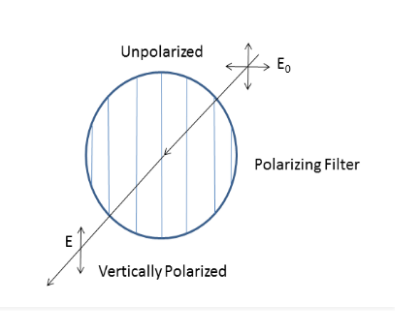 Q8: What do you mean by double refraction?

Double refraction is an optical property in which a single ray of unpolarized light entering a medium is split into two rays, each travelling in a different direction. The principle of double refraction is used in a Nicol prism. The Nicol prism is made using Calcite crystal pieces. The calcite crystal is cut into two pieces at a certain angle and joined using a transparent cement called Canada Balsam.

Q9: Write the differences between interference and diffraction.

Q10: Write down the main differences between Fresnal and Fraunhofer diffraction.

Q1: On the basis of Huygen’s wave principle, give the interpretation of the reflection of light.

Interpretation of the reflection of light

If you look at the figure, AA’ is the wavefront incident on a reflecting surface XY having an angle of incidence i. Following Huygen’s principle, every point on AA’ will act as a source of secondary wavelets.

Interference is what happens when two or more waves meet each other. Depending on the alignment of crests and troughs of the overlapping waves, they might add up, or they can partially or entirely cancel each other.

The amplitude of a sinusoidal wave travelling to the right along the x-axis is given by,

Where A is the peak amplitude, k = 2π/λ is the wavenumber and ω = 2πf is the angular frequency of the wave.

Consider another wave of the same frequency and amplitude but with a different phase travelling to the right.

where φ is the phase difference between the waves in radians

The two waves superimpose and add; the resultant wave is given by the equation,

The sum of two cosines is given by the equation,

Solving equation (1) using the formula, we get