The following is a diagrammatic representation: 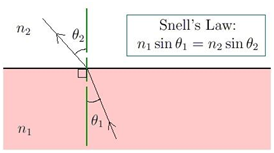 Snell’s law has a wide range of applications in physics especially in the branch of optics. It is used in optical apparatus such as eyeglasses, contact lenses, cameras, rainbows. There is an instrument called a refractometer that uses Snell’s law to calculate the refractive index of liquids. It is used all the time in the candy-making industry.

Question 1: If a ray is refracted at an angle of 14° and the refractive index is 1.2, compute the angle of incidence.

Question 2: If the angle of incidence is 25° and angle of refraction is 32°, find the refractive index of the media.

To solve more problems on the topic, download “BYJU’S – The Learning App”.