Sometimes we come across a very large number, which needs to be written in a form much smaller and understandable by the universe. When a large number is reduced in its decimal notation accompanied by an exponential, it is called standard form. Sometimes standard form is also known as exponential notation or scientific notation.

To understand negative numbers standard form, refer the image below: 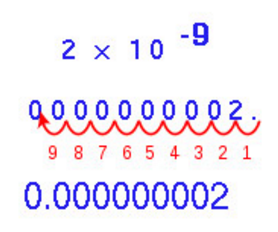 To accommodate the digits after decimal places we use this method.