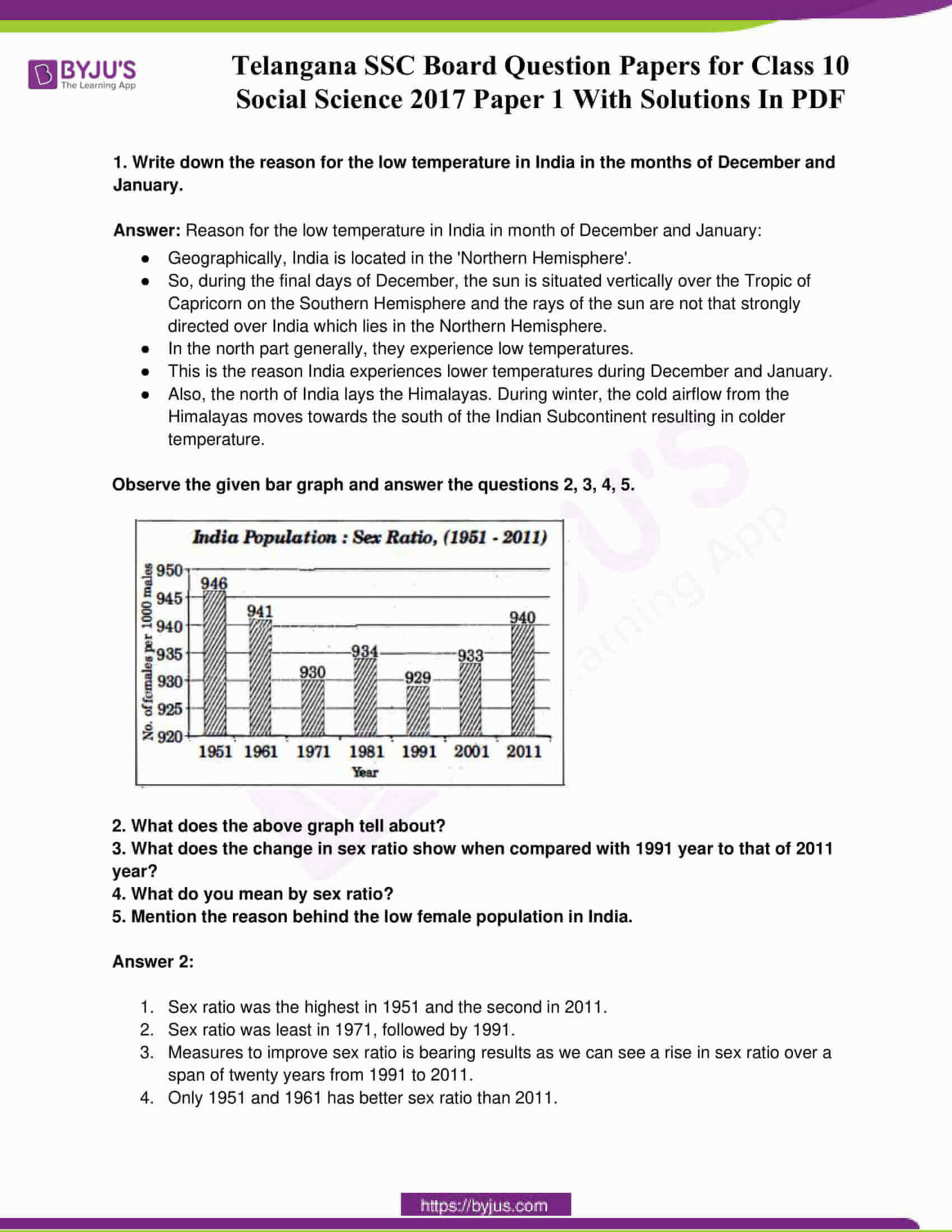 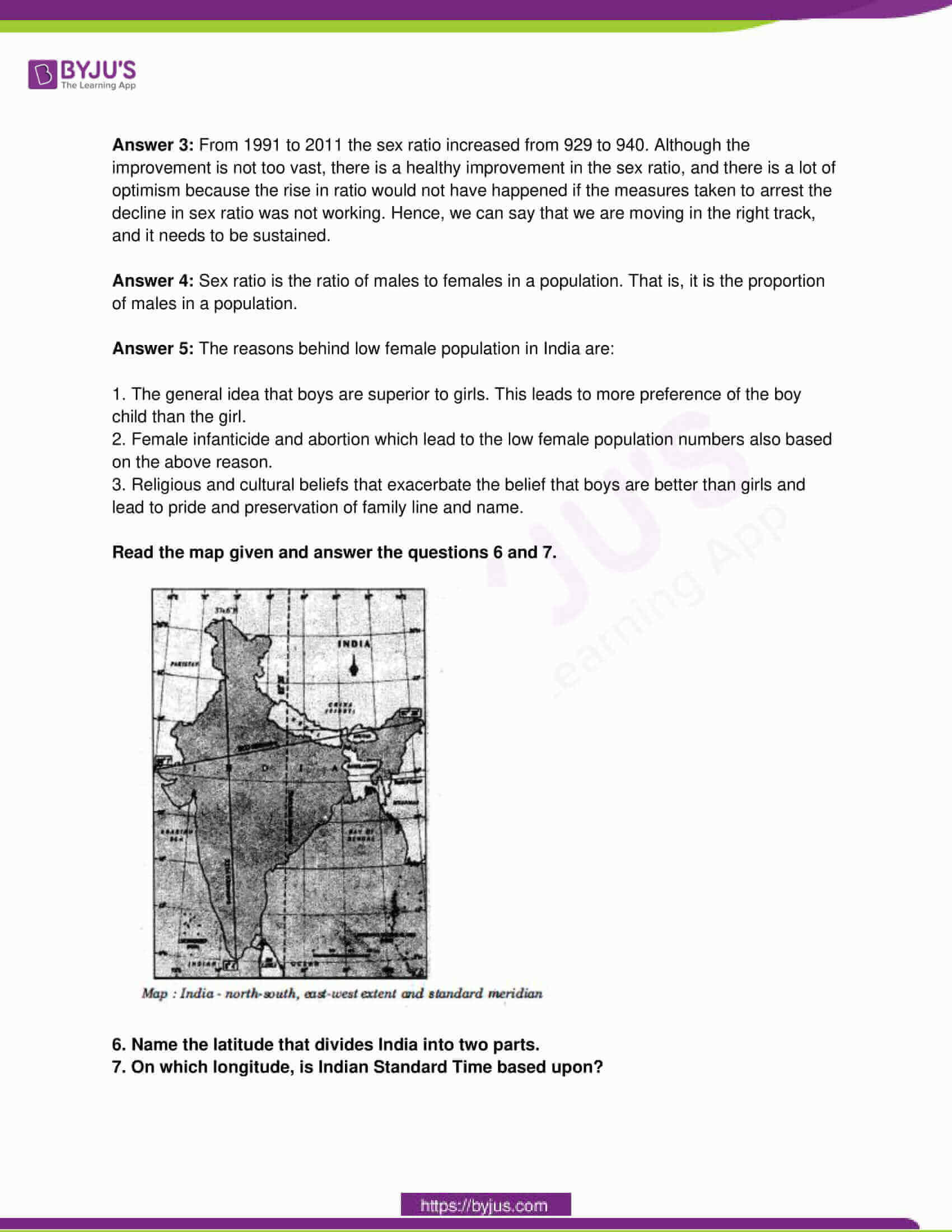 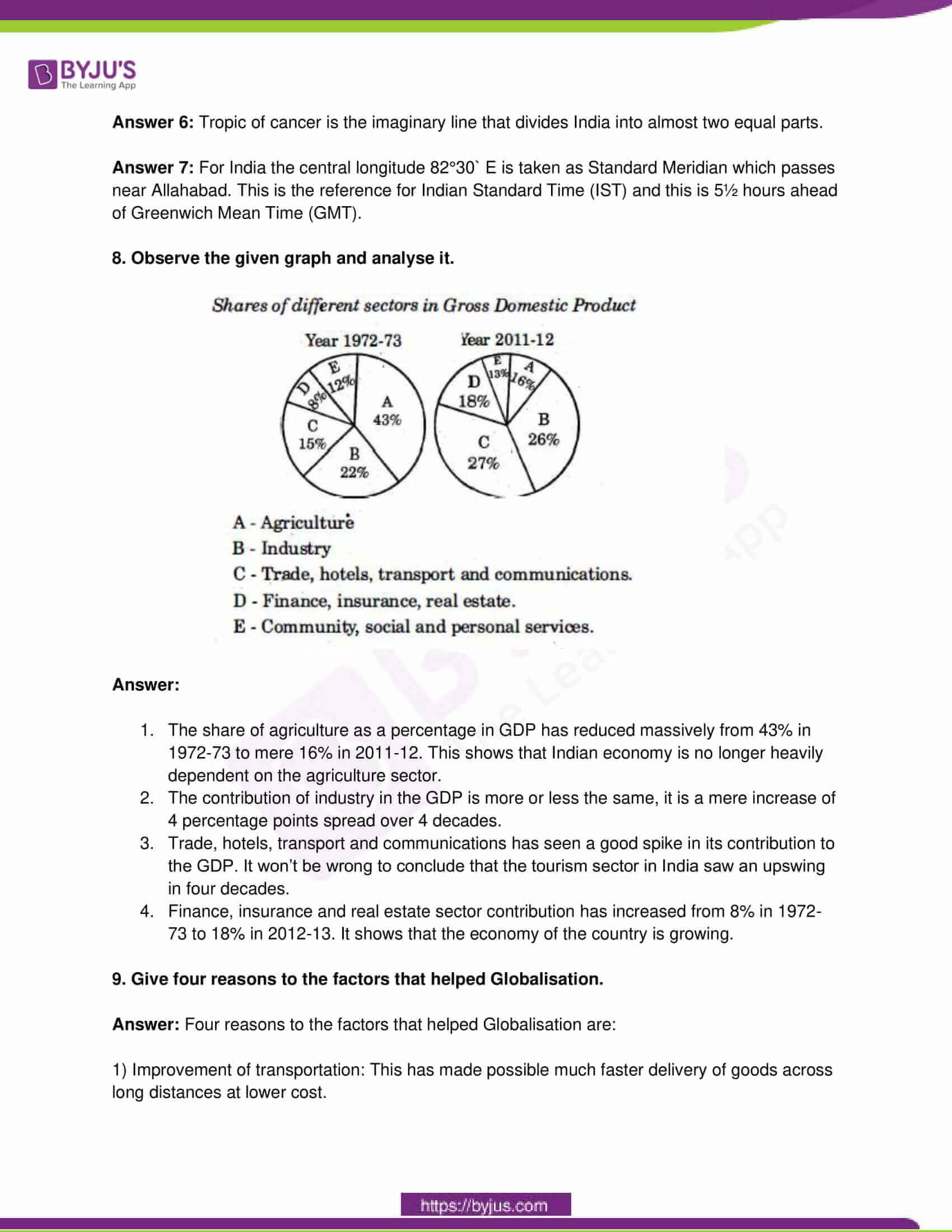 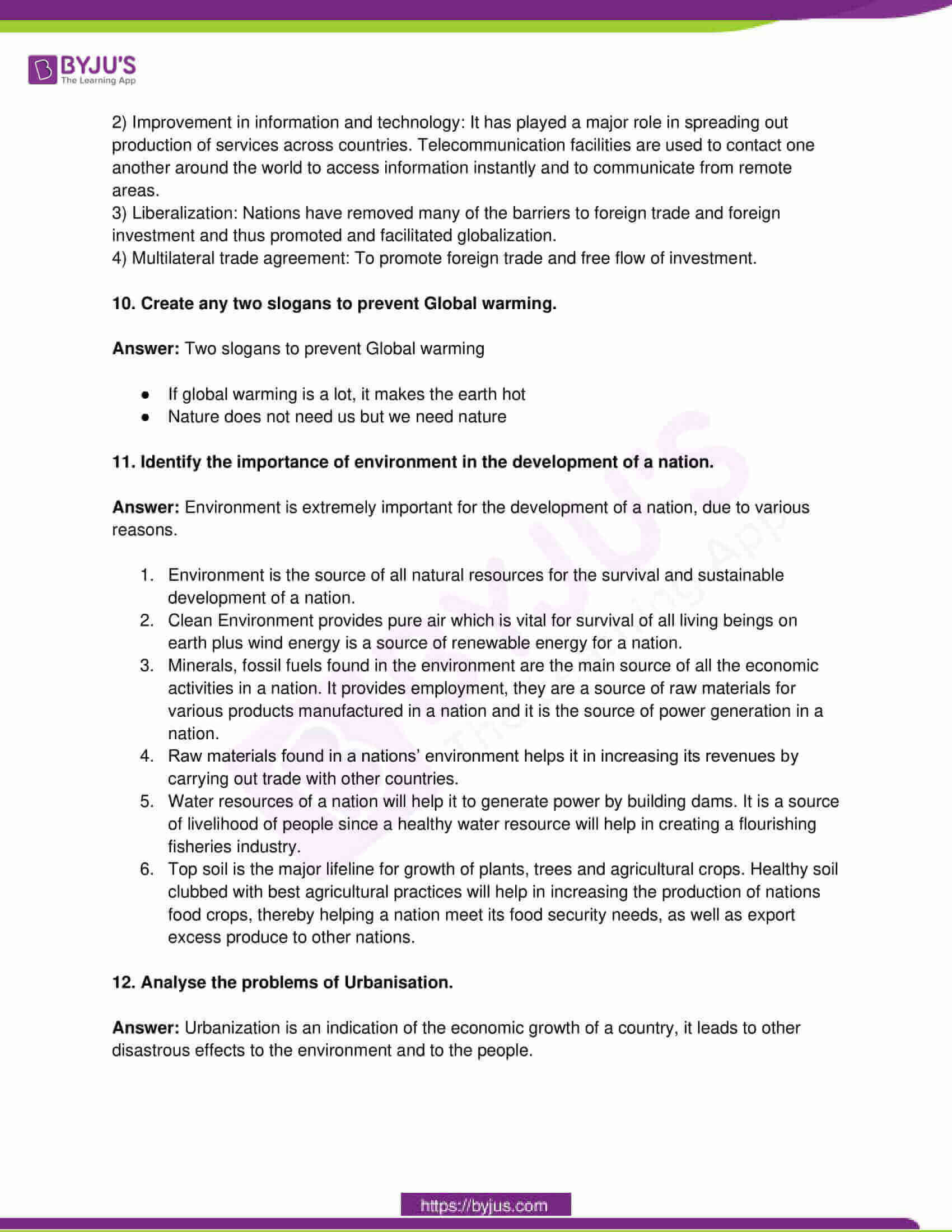 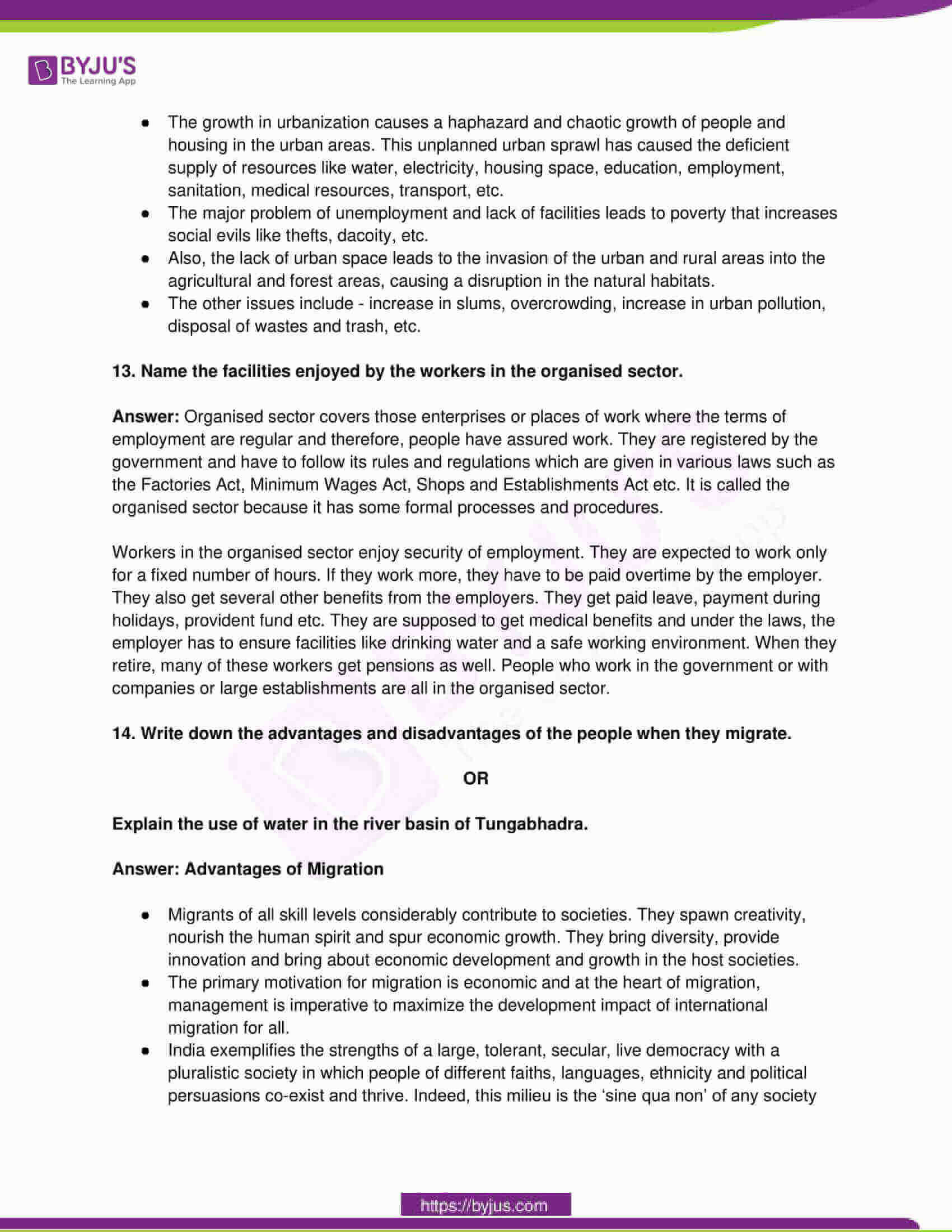 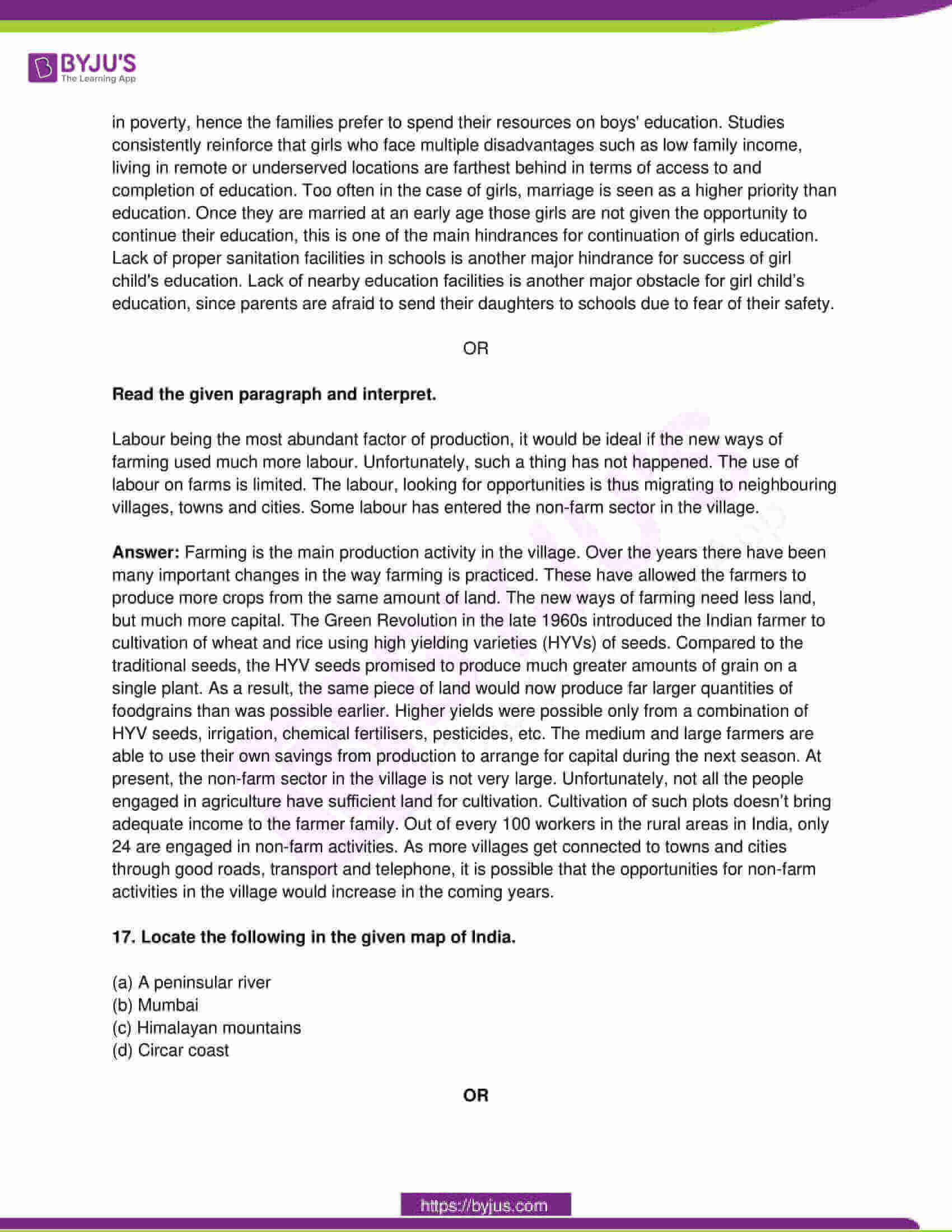 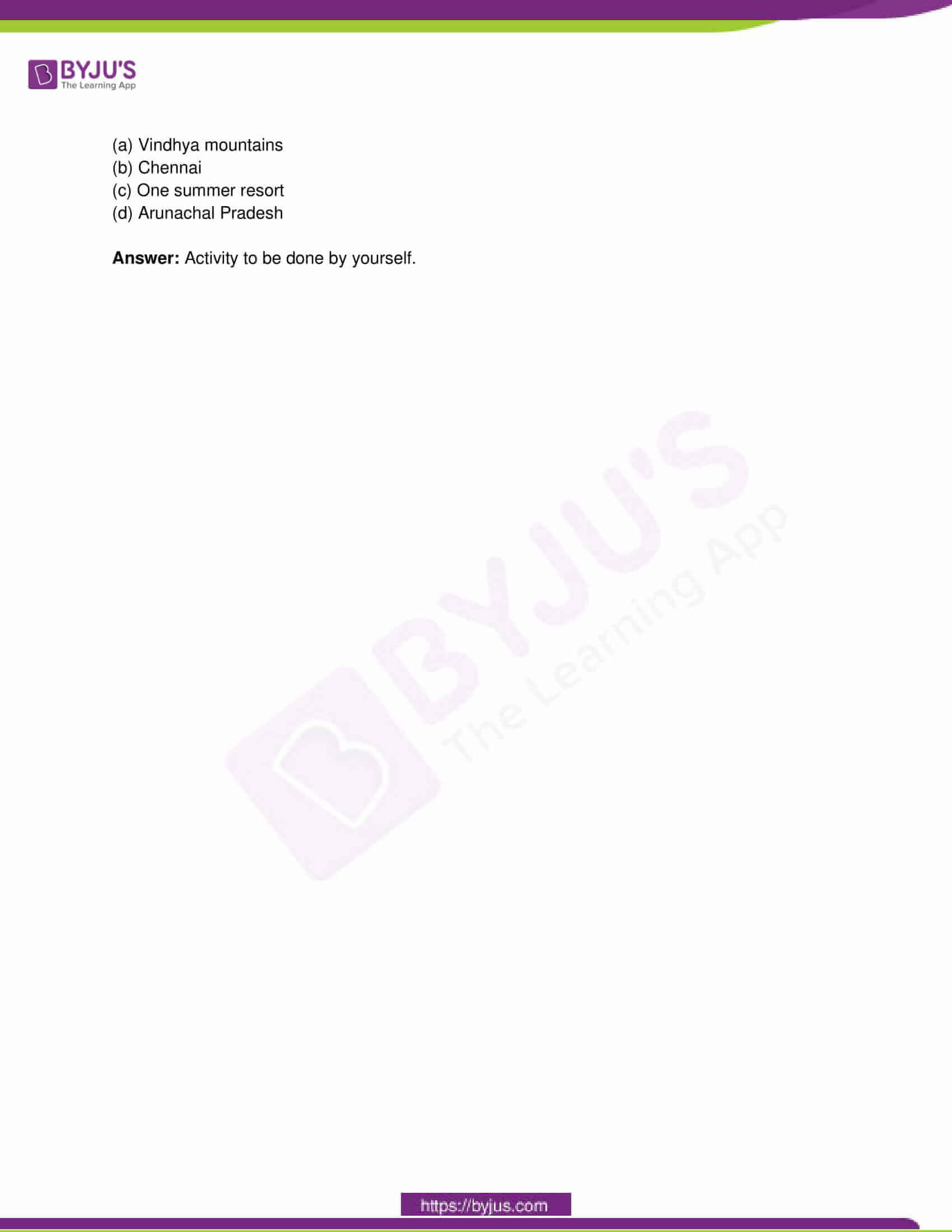 1. Write down the reason for the low temperature in India in the months of December and January.

Answer: Reason for the low temperature in India in month of December and January: 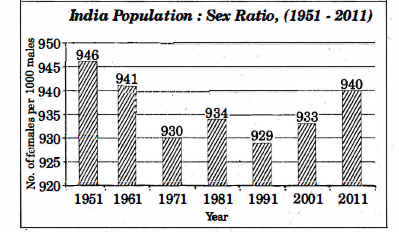 2. What does the above graph tell about?

5. Mention the reason behind the low female population in India.

Answer 3: From 1991 to 2011 the sex ratio increased from 929 to 940. Although the improvement is not too vast, there is a healthy improvement in the sex ratio, and there is a lot of optimism because the rise in ratio would not have happened if the measures taken to arrest the decline in sex ratio was not working. Hence, we can say that we are moving in the right track, and it needs to be sustained.

Answer 5: The reasons behind low female population in India are:

1. The general idea that boys are superior to girls. This leads to more preference of the boy child than the girl.

2. Female infanticide and abortion which lead to the low female population numbers also based on the above reason.

3. Religious and cultural beliefs that exacerbate the belief that boys are better than girls and lead to pride and preservation of family line and name.

Read the map given and answer the questions 6 and 7. 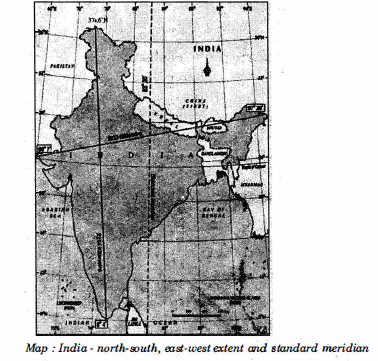 6. Name the latitude that divides India into two parts.

7. On which longitude, is Indian Standard Time based upon?

Answer 6: Tropic of cancer is the imaginary line that divides India into almost two equal parts.

Answer 7: For India the central longitude 82°30` E is taken as Standard Meridian which passes near Allahabad. This is the reference for Indian Standard Time (IST) and this is 5½ hours ahead of Greenwich Mean Time (GMT).

8. Observe the given graph and analyse it. 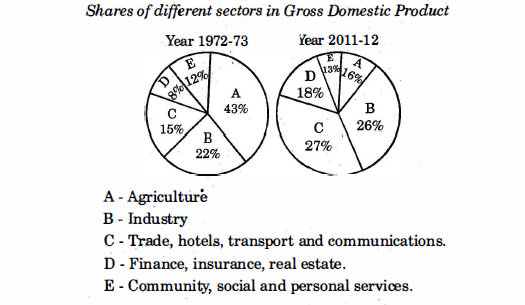 9. Give four reasons to the factors that helped Globalisation.

Answer: Four reasons to the factors that helped Globalisation are:

1) Improvement of transportation: This has made possible much faster delivery of goods across long distances at lower cost.

2) Improvement in information and technology: It has played a major role in spreading out production of services across countries. Telecommunication facilities are used to contact one another around the world to access information instantly and to communicate from remote areas.

3) Liberalization: Nations have removed many of the barriers to foreign trade and foreign investment and thus promoted and facilitated globalization.

11. Identify the importance of environment in the development of a nation.

Answer: Environment is extremely important for the development of a nation, due to various reasons.

12. Analyse the problems of Urbanisation.

Answer: Urbanization is an indication of the economic growth of a country, it leads to other disastrous effects to the environment and to the people.

13. Name the facilities enjoyed by the workers in the organised sector.

Answer: Organised sector covers those enterprises or places of work where the terms of employment are regular and therefore, people have assured work. They are registered by the government and have to follow its rules and regulations which are given in various laws such as the Factories Act, Minimum Wages Act, Shops and Establishments Act etc. It is called the organised sector because it has some formal processes and procedures.

Workers in the organised sector enjoy security of employment. They are expected to work only for a fixed number of hours. If they work more, they have to be paid overtime by the employer. They also get several other benefits from the employers. They get paid leave, payment during holidays, provident fund etc. They are supposed to get medical benefits and under the laws, the employer has to ensure facilities like drinking water and a safe working environment. When they retire, many of these workers get pensions as well. People who work in the government or with companies or large establishments are all in the organised sector.

14. Write down the advantages and disadvantages of the people when they migrate.

Explain the use of water in the river basin of Tungabhadra.

There are many disadvantages of migration.

Answer: Tungabhadra, shared by the three southern states, Karnataka, Telangana and Andhra Pradesh, is a tributary of the larger river system Krishna. It originates in the Western Ghats with a catchment area of 71,417 km2, of which 57,671 km2 are in Karnataka.

The use of water in the river basin of Tungabhadra are:

15. How can flexibility in labour laws support the present companies?

How far is ‘Food Security’ required today in India?

Answer: While there might be enough food for the whole population of India, many families and especially children in India don’t have access to food because of financial problems.Food security means affordability, accessibility, availability, of food at all times to all people. The poor households are more vulnerable to food insecurity whenever there is a problem of production or distribution of food crops. In order to provide the Right to food to every citizen of the country, the Parliament of India, enacted a legislation in 2013 known as the National Food Security Act, 2013. Also called the Right to Food Act, this Act seeks to provide subsidized food grains to approximately two thirds of India’s 1.33 billion population.Food security has been a major concern in India. Food security depends on the Public Distribution System (PDS) and government vigilance and action at times, when this security is threatened. UN-India, there are nearly 195 million undernourished people in India, which is a quarter of the world’s hunger burden, around 43% of children in India are chronically undernourished.India ranks 74 out of 113 major countries in terms of food security index.The largest number of food insecure people in India are located in the states of West Bengal, Jharkhand, Bihar, Uttar Pradesh (eastern and south-eastern parts), Orissa, Chattisgarh, parts of Maharashtra and Madhya Pradesh. Since the advent of the Green revolution in the early-’70s, the country has avoided famine even during adverse weather conditions. As a variety of crops are grown all over the country, over the course of the last thirty years, India has become self-sufficient in food grains.

In many parts of the country, girl’s education is still given less priority by the parents as compared to boys’ education. While girls may study for a few years, they may not complete their schooling.

The proportion of girls going for higher studies is much lesser than boys, because parents prefer to spend their resources for boys education instead of girls education. While girls may study for a few years, they may not complete their schooling. Most of the families in rural areas are living in poverty, hence the families prefer to spend their resources on boys’ education. Studies consistently reinforce that girls who face multiple disadvantages such as low family income, living in remote or underserved locations are farthest behind in terms of access to and completion of education. Too often in the case of girls, marriage is seen as a higher priority than education. Once they are married at an early age those girls are not given the opportunity to continue their education, this is one of the main hindrances for continuation of girls education. Lack of proper sanitation facilities in schools is another major hindrance for success of girl child’s education. Lack of nearby education facilities is another major obstacle for girl child’s education, since parents are afraid to send their daughters to schools due to fear of their safety.

Read the given paragraph and interpret.

Labour being the most abundant factor of production, it would be ideal if the new ways of farming used much more labour. Unfortunately, such a thing has not happened. The use of labour on farms is limited. The labour, looking for opportunities is thus migrating to neighbouring villages, towns and cities. Some labour has entered the non-farm sector in the village.

Answer: Farming is the main production activity in the village. Over the years there have been many important changes in the way farming is practiced. These have allowed the farmers to produce more crops from the same amount of land. The new ways of farming need less land, but much more capital. The Green Revolution in the late 1960s introduced the Indian farmer to cultivation of wheat and rice using high yielding varieties (HYVs) of seeds. Compared to the traditional seeds, the HYV seeds promised to produce much greater amounts of grain on a single plant. As a result, the same piece of land would now produce far larger quantities of foodgrains than was possible earlier. Higher yields were possible only from a combination of HYV seeds, irrigation, chemical fertilisers, pesticides, etc. The medium and large farmers are able to use their own savings from production to arrange for capital during the next season. At present, the non-farm sector in the village is not very large. Unfortunately, not all the people engaged in agriculture have sufficient land for cultivation. Cultivation of such plots doesn’t bring adequate income to the farmer family. Out of every 100 workers in the rural areas in India, only 24 are engaged in non-farm activities. As more villages get connected to towns and cities through good roads, transport and telephone, it is possible that the opportunities for non-farm activities in the village would increase in the coming years.

17. Locate the following in the given map of India.

(a) A peninsular river